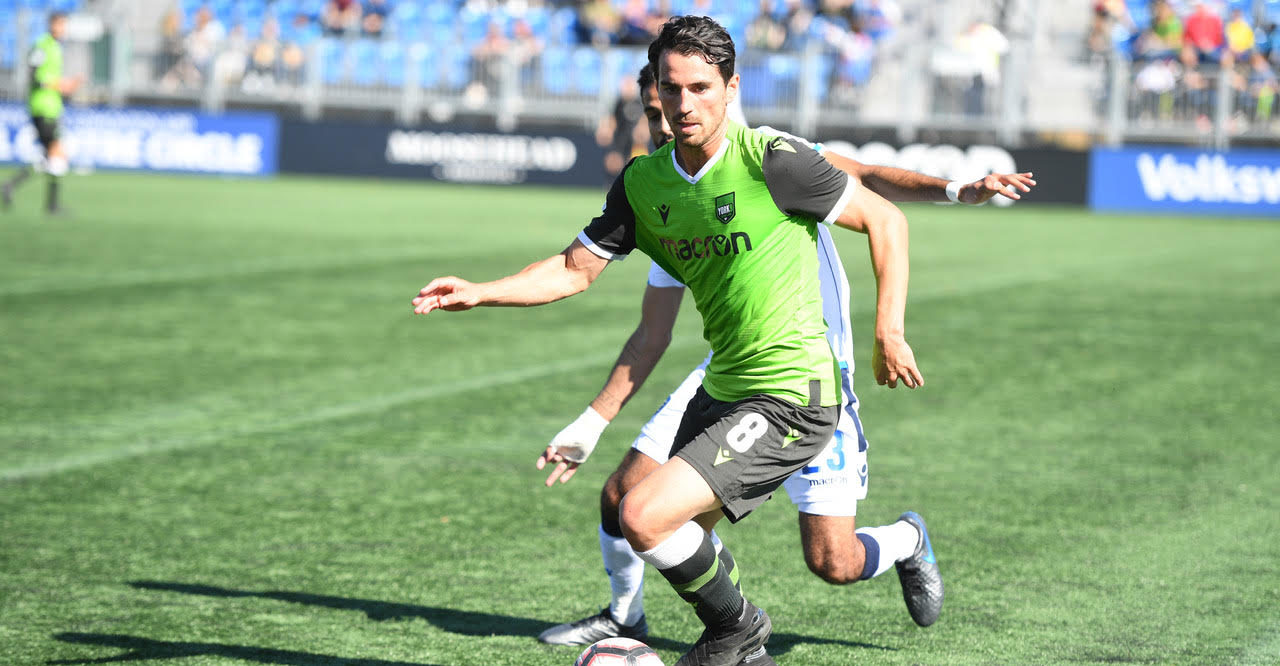 However temporary that might be (Pacific FC could reclaim the spot against Cavalry FC on Sunday), it’s still the latest peak in the wild series of ups and downs that’s been York9’s Fall season.

Saturday’s 3-1 road win over FC Edmonton was the work of a side that’s in sync at both ends of the pitch, in contrast to the York9 that was exposed far too often by Valour FC in their previous match.

“When you look at this league there’s a lot of parity,” Y9 boss Jimmy Brennan told reporters in Edmonton. “All teams beat everybody throughout the season. For us it’s just being a little bit more consistent.”

The cohesive, exciting version of York9 that put three first-half goals past the Eddies isn’t necessarily what we’ve seen week in and week out. Perhaps more importantly than scoring, though, the Nine Stripes defended well on Saturday to hold onto the lead — something that’s let them down in recent weeks. York9 has scored the second-most goals in the league (21), but they’ve also conceded the second-most (22).

On Saturday, though, Brennan gushed praise for his defenders, who stood firm against an FCE side that attempted to threaten with long balls played in toward their tall forwards.

“I thought (Justin) Springer and Luca (Gasparotto) were very good, and obviously we had more height coming in when (Daniel) Gogarty came on at left back,” he said. “That helps dealing with the long balls, having guys with height back there. We’re good in the air; they’re defenders, they love to head the ball.”

The Nine Stripes’ backline certainly did do well in the air, with 10 of the Eddies’ 14 crosses missing their mark.

Another huge boon to York9 was the return of Ryan Telfer, who hadn’t played in the club’s last three games due to international duty with Trinidad and Tobago. In addition to providing a goal and an assist, Telfer’s versatility allows Brennan to give his side a little more freedom to roam, making the attack more fluid.

“I allow our guys to move and interchange, as long as we’ve got balance,” Brennan explained. “That’s why (Rodrigo) Gattas will drift out to the right side, Telfer will come over to the left side, or sometimes Telfer will come into the middle and (Manny) Aparicio will come out wide.”

“I want them to be creative in the final third,” he added.

Although they’ve climbed up the ladder in the Fall standings, York9 still faces a nine-point gulf between them and 905 Derby rivals Forge FC at the top. With just five games left, they’ll essentially need to win out if they’re to have a shot at topping Forge and winning the Fall competition.

So, it all comes back to consistency. Although the Nine Stripes’ lineup doesn’t change game-to-game nearly as much as most other CPL sides, the team has delivered a wide spectrum of performances in a very short span.

Brennan pointed to Gasparotto’s early goal in Edmonton as a moment that filled his team with the confidence they needed to surge forward, but Gattas’ seventh-minute marker against Valour last weekend didn’t have the same effect.

“It’s just being consistent,” Brennan repeated. “We’ve got to build on it.”

With next Saturday’s home clash with Cavalry FC looming (6:00 p.m. ET, on OneSoccer), Brennan will spend the week trying to find how exactly he can get a performance like this one at Clarke Field out of his squad again.