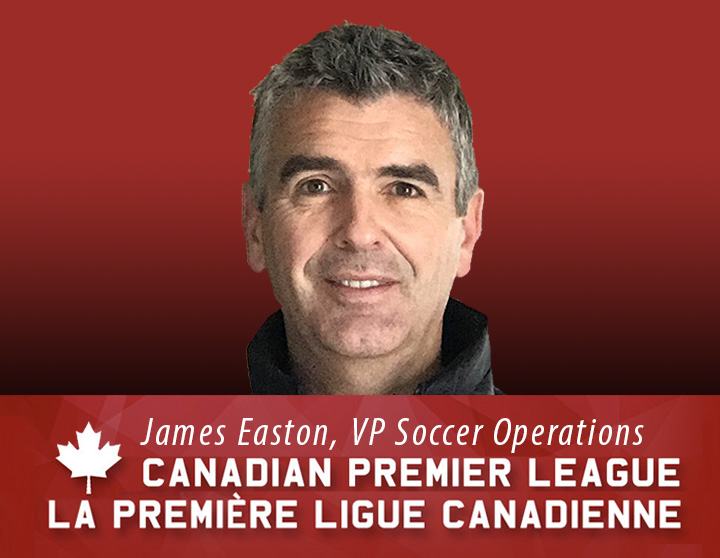 As Vice President of Soccer Operations for the CPL, Easton is responsible for all on-field matters including competition standards, player management and development, officiating and scheduling. He will work closely with regulatory groups to ensure all aspects of the CPL are in full compliance to FIFA, CONCACAF and Canada Soccer standards.

“James is a longstanding champion of Canadian men’s soccer and he possesses an intrinsic understanding of what is required to make the CPL a long-term success on and off the pitch,” said David Clanachan, CPL Commissioner. “To have James’ technical expertise, knowledge and vision in our corner will allow the CPL to deliver some compelling competition.”

An exceptional midfielder, Easton represented Canada numerous times in soccer on both the youth and senior men’s national teams. He played professional soccer with the Tampa Bay Rowdies of the NASL, Dundee United FC of the SPL, and the Vancouver ‘86ers/Whitecaps FC of the USL/MLS. In 2004, Easton was inducted into the B.C. Sports Hall of Fame as a member of the 1989 Vancouver ‘86ers.

Easton holds an MBA in Executive Management from Royal Roads University and was previously the head coach of the Capilano University men’s soccer team.

“The CPL has injected Canadian soccer with new life and, as a lifelong fan of the sport, I couldn’t be more honoured to be a part of this grassroots movement that will bring greater opportunities for our athletes to play the game that they love at a professional level,” said Easton. “This is an incredibly rewarding opportunity for all of us at the CPL to give back to the communities that have shown unwavering support for soccer in Canada, and I’m excited to help build a league that is strong, competitive and engaging for fans from coast to coast.”

The CPL is set to debut with its inaugural season in Spring 2019.

Canadian Premier League (CPL) is Canada’s domestic men’s soccer league set to debut in spring 2019. Playing in world-class and unique venues, The CPL will bring professional soccer to communities across our great country. Canada Soccer approved the membership of the CPL and founding cities Hamilton and Winnipeg at the 2017 Annual Meeting of Members. The CPL has intentions to partner with strong community-led ownership groups to bring professional soccer to Canadian communities from coast to coast.