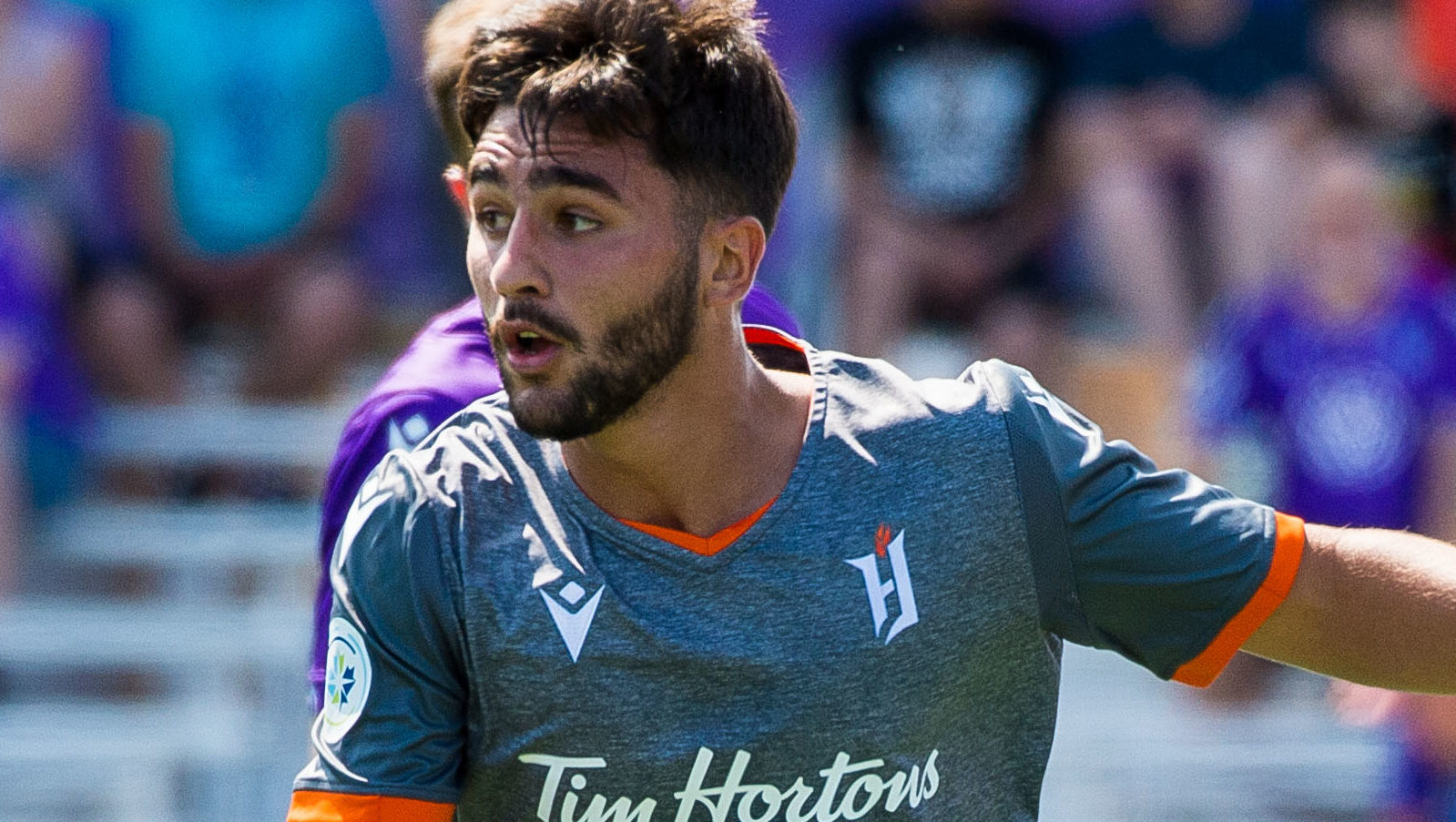 VANCOUVER ISLAND – After scoring just once in their previous two games, Forge FC resumed business as usual on Saturday in their thrilling 3-2 victory at Pacific FC.

For a while, it seemed that nothing could possibly break the deadlock at Westhills Stadium; the sides went into the dressing room with a 0-0 halftime score, despite Forge’s onslaught of 15 shots in the opening frame. They squandered chance after chance, with one-on-one shots either sent wide of goal or put into the hands of Pacific keeper Nolan Wirth.

Forge kept knocking on the door, though, and soon it swung wide open. Their three second-half goals (and Pacific’s two) erased any memory of a baffling first 45, as their attack began to click just two minutes after halftime.

Not much, according to Forge coach Bobby Smyrniotis.

“We stuck to a game plan that we put in place at the beginning of the game,” Smyrniotis said after the match. “You look at the first half and we created a lot of opportunities, a lot more than we also usually have — and we usually have quite a few in the start of games — so we just wanted the guys to be patient and keep on doing that.”

Smyrniotis made no substitutions at halftime, nor did he adjust his tactics. Forge came back out with a similar approach, hoping only to find their scoring boots and bag just a few of their abundant chances.

“Sometimes you know in the game of football you can miss three or four chances, and you see Pacific has one chance with (Noah) Verhoeven in the first half, their lone chance, and that can change a game,” Smyrniotis said, recounting the warning he gave his players during the interval.

It all paid off in the end for Forge. Even as far back as last weekend against FC Edmonton, it was the same story: plenty of chances, not much to show for it. Finally, though, a few moments of quality prevailed.

Now, all is once again right in the world for Forge fans, as Tristan Borges reclaims his seat atop the league’s scoring leaderboard, with six goals to his name in the CPL. His two-goal afternoon was a reintroduction of sorts, as he returned to form after a six-week scoring drought.

“You see him, he’s a dynamic player,” Smyrniotis said in praise of Borges. “He makes things happen.”

He certainly did, with two of his three shots hitting the twine and six key passes (including an assist to Emery Welshman) helping cut open Pacific’s shaky defence.

Smyrniotis also revealed a potential reason for his high-scoring forward’s quiet performances in the month of June, telling CanPL.ca that Borges has been dealing with a nagging injury since the beginning of the year. He was kept out of the starting 11 last weekend against FC Edmonton, but it seems that the issue has been ongoing.

A frightening prospect, perhaps, for fans of opposing teams, considering how Borges played on Saturday.

Borges himself isn’t hung up on the win over Pacific; rather, he’s focusing on returning to full health and making a proper push for the Fall championship.

“It’s good to get 90 minutes under my belt today, but I’m already focusing on next game,” Borges said.

“Seeing how the first half of the season went, I think it was more our fault,” he added. “We kind of let some points drop, and it got us a little frustrated, but I think we bounced back.”

After coming second in the Spring, Forge seems the nominal favourite to triumph in the Fall. They stumbled in their first game against FC Edmonton, and they looked similarly frustrated to start this one, but they turned a page in the second half.

Forge has now found their footing in the Fall season, and just in time, too; the end of July and beginning of August have a few huge tests to reckon with, including a two-legged CONCACAF League tie with Antigua GFC, beginning August 1.

Before that, though, it’s back home for a Wednesday clash with HFX Wanderers FC (7:00 p.m. ET/OneSoccer).