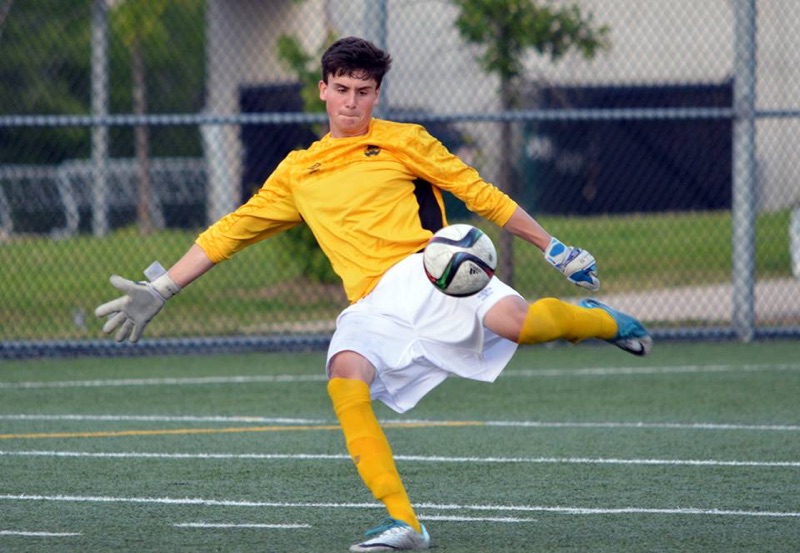 New HFX Wanderers FC goalkeeper Kieran Baskett wishes he could have had a chance to spend at least one match as a supporter in The Kitchen.

But it won’t be a sob story for Baskett, who signed with the club this past week, that he will be kept away from Wanderers Grounds’ raucous supporters’ section whenever the Wanderers play their next home match.

Halifax born and raised and only 19 years old, the young goalkeeper is looking forward to eventually making his CPL debut, thus completing the transformation from Wanderers fan to player.

“It’s too bad I’m already on the team – I would have liked to be in the supporters’ section at least once,” Baskett told CanPL.ca, referring to several Wanderers games he watched from other sections of the stadium during the 2019 season.

Baskett comes back to his hometown after several years in the United States, including a standout freshman year at NCAA Division 1 school William & Mary in Williamsburg, Virginia. Before that, the six-foot-three shot stopper attended a boarding school in Maryland.

The Haligonian made 18 starts for William & Mary in 2019, racking up 71 saves in the Colonial Athletic Association as a starter after the school’s first choice ‘keeper went down injured before the season opener.

“I got in during the last game of preseason and ended up playing every single minute of their season,” Baskett explained.

Returning to Halifax last March, Baskett didn’t expect COVID-19 to keep him in Canada for long, or end his NCAA career early.

“My plan, when I came back in March, was to do the full four years in college,” Baskett said. “I was here for a while, started doing courses locally, and then [Wanderers coach] Stephen Hart reached out and expressed interest. It took me a couple of weeks to come to the decision but I’m glad I did. My family likes to say ‘things happen for a reason’ and that’s really what happened to me.”

A message to the fans from our newest Wanderer 🔵⚪️

He’s set to work in tandem with 2020 CPL Golden Glove nominee and former St. Mary’s University standout Christian Oxner – someone he looked up to and played against on occasion growing up in Halifax.

Baskett also played alongside HFX midfielder Scott Firth on the province’s Canada Games team in 2017, when he was in Grade 10 and just before he moved to the Baltimore area for his remaining two years of high school.

“By Grade 10, I made the decision to do boarding school in the Baltimore area,” Baskett recalled. “There were a lot of ups and downs but it was the right decision. I wouldn’t be here today if that didn’t work out.”

While whispers of a Halifax club in a new Canadian league were plentiful by 2017, Baskett said he never would have dreamed of ever setting foot on the field for a pro team in his hometown,  especially this soon into his career.

“I wasn’t really thinking about coming back to Halifax, but I also never would have expected the league and the club to take off like it has,” Baskett said. “Really, I was pretty lucky for it to happen the way it did.”