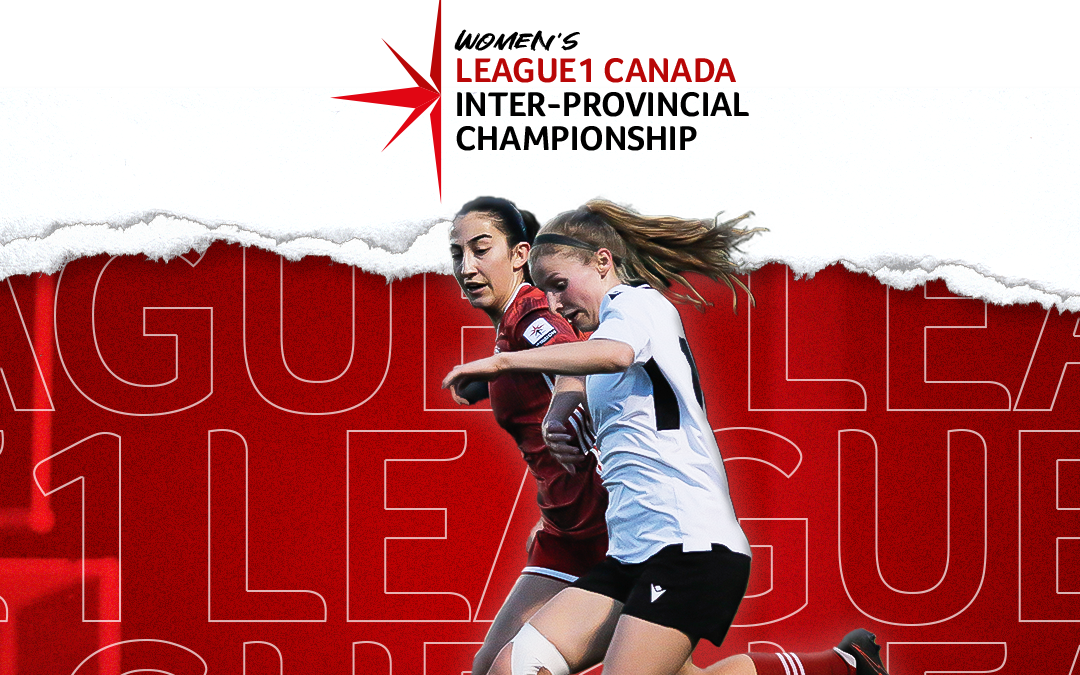 “The League1 Canada Women’s Inter-Provincial Championship is an important step for our new national alliance, as we work to unify, elevate and expand pro-am soccer in Canada,” said Dino Rossi, president of League1 Canada. “Growing the women’s game in our country is a main objective of League1 Canada. Implementing such inter-provincial competitions is instrumental to that development, as we work toward the creation of a domestic professional women’s league from coast to coast.”

This year’s four-team women’s tournament will be played from August 12 to 14, 2022 at Le Complex Sportive Bois-de-Boulogne in Laval, Quebec. It will include one team representing League1 BC, the winner of League1 Ontario’s Women’s Championship and the champion of PLSQ. PLSQ’s league runner-up will round out the field, as event host.

“The introduction of the Women’s Inter-Provincial Championship is an exciting milestone in the evolution of the Canadian soccer” said Breagha Carr-Harris, Head of Women’s Professional Soccer for Canada Soccer. “The Championship offers the opportunity for top tier athletes within the Pro-Am leagues to compete against each other for the first time, while also building an important alliance between Canada’s existing provincial Division III Pro-Am soccer leagues. This competition and partnership are both pivotal elements in building a Canadian identity within our sport. I look forward to cheering on the teams as they participate in the inaugural tournament, and for years to come.”

All matches in the championship will air exclusively on OneSoccer, the home of Canadian soccer, available as a linear channel through Telus Optik TV (Ch. 980 in the More Sports pack) as well as via the fuboTV Canada platform, at OneSoccer.ca and on the OneSoccer app.

“For the past few years, it has been a priority for the Première Ligue de Soccer du Québec to offer an Inter-Provincial opportunity for our women’s teams,” said Mathieu Chamberland, director general of Soccer Québec. “Holding this event as part of our League1 Canada alliance is the start of a great collaboration. This event will be positive for the development and visibility of women’s soccer in Canada. We are proud to host the first edition in Laval in August.”

League1 Canada would like to thank the city of Laval, Tourism Laval and Sports Laval for the financial backing as part of Laval SportCité’s event support program.

PLSQ’s champions will meet the League1 BC representative in the semi-final round on August 12, while PLSQ’s runner-up will take on League1 Ontario’s champion. The Championship Final, as well as a match to decide third place, will be played on August 14.

“The Inter-Provincial Championship is a tremendous opportunity for all three leagues to have increased meaningful, high-level competition, which is an important component of player, coach and club development nationally,” said Sian Bagshawe, general manager of League1 BC. “The continued collaboration of the provinces within League1 Canada will enable this Championship to showcase the talents of players who have risen from the grassroots and are striving for additional opportunities within the game.”

Canadian Women’s National Team players and Olympic Gold Medallists Vanessa Gilles, now a defender with Angel City FC of the National Women’s Soccer League, as well as Gabrielle Carle and Evelyne Viens, who represent Kristianstads DFF in Sweden’s Damallsvenskan, are some of the alums of Canada’s provincial Division 3 Pro-Am leagues who have ascended to the professional game. Others include Sarah Stratigakis, who played four seasons in League1 Ontario before signing with Vittsjo GIK in Sweden’s first division in January.

League1 Canada is national alliance of Canada’s existing provincial Division 3 Pro-Am men’s and women’s soccer leagues: League1 BC, League1 Ontario and Première ligue de soccer du Québec (PLSQ). Established in March 2022, League1 Canada aims to achieve meaningful alignment of Canada’s three provincial Pro-Am leagues. It connects with provincial soccer associations that sanction and support the operation of those leagues, as well as with the Canadian Premier League, and a wide range of other stakeholders within Canadian soccer.

League1 BC is an adult, open-age Pro-Am Soccer League operated by BC Soccer. Established in 2021, the league bridges the gap between youth and professional soccer, targeting the “Training to Compete” stage within Long-term Player Development (LTPD). The league will engage communities across British Columbia providing standard-based competition and training environments for female and male players, coaches, and match officials. League1 BC serves as a key platform for advancement to further opportunities within the game.

League1 Ontario is the province’s Pro-Am, standards-based, senior league. Founded by Ontario Soccer in 2014, L1O has expanded from a 10 to 22-team men’s division, and now boasts a 20-team women’s division. It serves as a stepping stone between the high-performance youth level and elite amateur and professional levels of the game. Owned and managed by Canadian Soccer Business (CSB) and sanctioned by FIFA through the domestic bodies of Canada Soccer and Ontario Soccer, L1O’s primary focus is the showcase and development of Canada’s future stars.

The Première ligue de soccer du Québec is a semi-professional soccer league created in 2012 under the aegis of Soccer Québec. Affiliated with Canada Soccer, this is the highest division of soccer in Québec and is recognized as a Division 3 league in Canada.

OneSoccer, the dedicated soccer channel launched by Mediapro Canada in 2019, is the home of Canadian soccer, as the exclusive broadcaster of the Canadian Premier League and the Canadian Championship, Canada Soccer’s Men’s and Women’s National Team’s home friendliest and Concacaf national team and club tournaments through to 2023. It is available for streaming through the OneSoccer website and with the OneSoccer app. It is also carried as a linear channel on Telus Optik TV (Ch.980), one of Canada’s ‘big three’ telecoms companies, as well as on streaming service fuboTV Canada. Visit OneSoccer, the hub of all things Canadian soccer.

Canadian Soccer Business (CSB) represents a suite of top-tier national assets that are core to the sport of soccer in Canada. This includes representation for all corporate partnerships and media rights (broadcast and distribution) related to Canada Soccer’s core assets including the Qatar 2022-bound men’s national team, the Olympic champion women’s national team, the Canadian Championship, the country’s highest domestic club competition and League1 Canada, along with all rights associated with the Canadian Premier League, Canada’s tier 1 men’s domestic professional league playing in the global FIFA series of competitions.