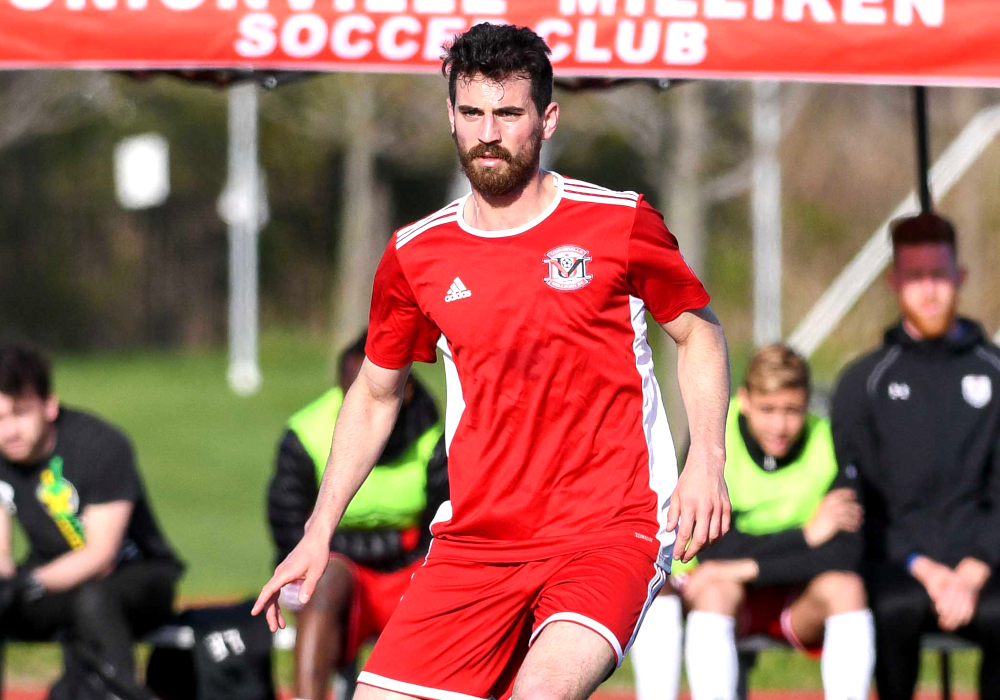 Joseph Di Chiara was in Lithuania, finishing what was a frustrating season with FK Jonava. The team was in dead last in the A Lyga, that country’s first division, and was headed for relegation.

He had another year to go on his contract, but knew management would strip the team to the bare bones so it could cope with being relegated. Many players were going to be released.

Di Chiara can now look forward to spending 2019 as one of the marquee attractions for York9 FC supporters. Not only is he expected to be a general in the middle of the park, he brings some truly unique experiences to the mix.

He’s played in Russia’s top flight. He’s played in Hungary and Kazakhstan. And his European sojourns have sandwiched some impressive stints with League1 Ontario, where he’s won league and Cup titles with Vaughan Azzurri, under the tutelage of Carmine Isacco, now an assistant to coach Jimmy Brennan with Y9.

“Joseph is without question one of the top players to ever take the pitch in League1 competition,” said League1 Ontario President Dino Rossi.

“He is a midfield general on the field and a real pro off the pitch. Young players should learn from footballers like Joe. His inner drive and disciplined approach to the sport is a big part of his success as a player.  I have no doubt he will be a top player in CPL.”

As a player, Rossi likened Di Chiara to Canadian international Mark-Anthony Kaye, who seized a starting job with LAFC this past season, before a fractured foot derailed his breakout year.

Isacco said that Di Chiara provides intangibles that go beyond what he’ll provide in the games. As someone who left Ontario as a teenager to try and stick with a top-flight Russian side, Di Chiara will provide a lot of wisdom to York9’s young core.

“When Joe channels those experiences properly, he has the ability to make all the players around him grow,” said Isacco. “He has gone to a lot of places that aren’t so easy …  Joe is a quiet leader. He’ll be the first one on the field, and the last guy off the field.”

It’s the kind of drive needed to survive some of Eastern Europe’s top divisions.

“The path I took was a difficult one,” said Di Chiara, who became a sort-of cult hero with Canadian soccer supporters in 2011, when news filtered out that he’d gone to Russia and signed a deal with Kryliya Sovetov. “There’s not many players who would choose to do what I did. But now the opportunity is here to grow the teams, to grow players, to grow soccer. It’s huge for players here.

“For players growing up now, this league presents a huge opportunity, and maybe they can learn from my experiences.”

Players in Kryliya Sovetov’s camp were “on” all the time, he added — the kind of day in, day out intensity he’ll look to install in York Region.

After Russia, he endured an injury-plagued season in Hungary, with Kecskemeti TE — he said he was never at 100% during his time there. He went back to Russia with Torpedo Moscow, returned to Ontario, then went to …

He spent a season with Okzhetpes, a team in Kokshetau — which has about 150,000 residents and is a short drive from Siberia.

“Kazakhstan was easily the most difficult country to play in,” Di Chiara recalled to CanPL.ca. “There is lots of turnover in the league, because players go there because they know the teams are financially stable.

“I got to see a lot of places in another part of the world … It’s like you’re on another planet.”

And, while CPL road trips across time zones to Victoria in the west and Halifax in the east may be daunting for some, they might seem like puddle jumps to Di Chiara, who has, well, seen his share of epic road trips.

“I have heard people say that the travel is going to be tough. For me, it will be fine. There was one time, in Russia, we played away to a team that was close to Japan. It was nine time zones away.”