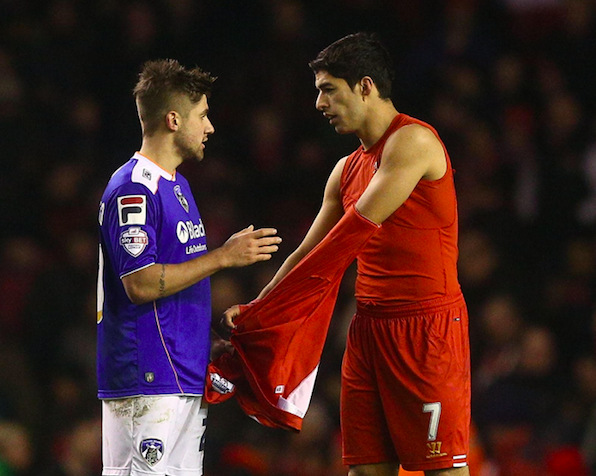 York9 FC’s Michael Petrasso does not take long to answer the question.

And his response is certainly memorable.

“My FA Cup memories? Well, whenever I think of the competition, the first thing that comes to mind is trading shirts with Luis Suarez,” Petrasso said.

Currently on loan with English side Barnet FC – who are in FA Cup action this weekend – the winger boasts plenty of experience in arguably the world’s most storied domestic tournament.

But it’s a January day back in 2014 that sticks out in his memory.

“I was on loan at Oldham from QPR and we knew that a win over Mansfield in the previous round would give us the chance to face Liverpool,” Petrasso explained

“I actually scored in the replay and got to start at Anfield. My dad flew out to watch me, he came all the way over to England. It was an amazing experience.”

But there was to be no romantic upset on Merseyside that afternoon.

Brendan Rodgers named a side that included Steven Gerrard, Raheem Sterling and Jordan Henderson and in front of a crowd of over 44,000, the Reds racked up a 2-0 victory thanks to an opener from Iago Aspas (his first for the club) and an own goal from James Tarkowski.

Still, despite the disappointment at not progressing, Petrasso was still assured a pretty special moment at the full-time whistle, thanks to a certain Uruguayan striker who’d been introduced as a late substitute.

“I played left wing and Suarez was up front so I knew I’d never get the chance to come across him but Daniel Agger went down injured with about 10 minutes left and Suarez came across to grab some water,” Petrasso recalled.

“We were already down 2-0 by that stage. I called out, ‘Suarez…’ and I said his name three times before he turned around. I just gave him a gesture, like I wanted to get his shirt. He winked and gave me a thumbs up. But after the game he was already halfway across the field and a couple of our guys went to ask him for his shirt. And he said, ‘No, I have to give it to that boy over there.’

“He walked all the way over and handed it to me. I didn’t give him mine, at first. Like, what would he have wanted with my shirt? But then he tapped me on the shoulder and gestured for it. I don’t know where that’s ended up. Probably in a box somewhere. But I thought it was cool.”

The magic of the cup, indeed.