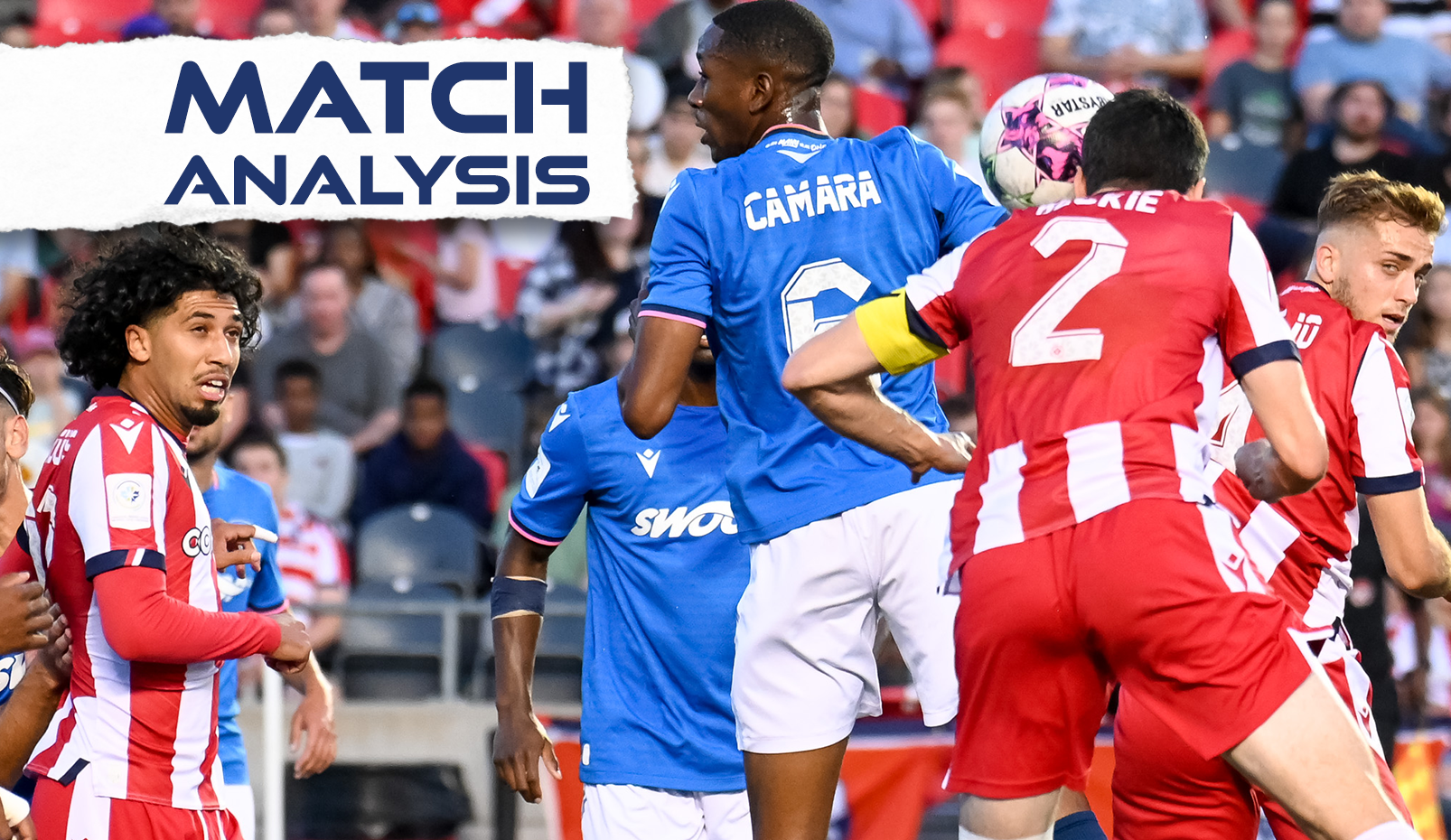 FC Edmonton and Atlético Ottawa battled to a scoreless draw on Friday night at TD Place, as neither side proved able to break the other down enough to test the opposing goalkeeper much.

Ottawa took the initiative in the first half with a few dangerous chances and a string of consecutive set-pieces, but Edmonton’s stout defence held firm against the league’s first-place team. Alan Koch’s side became even harder to break down in the second half with some tactical adjustments, and from there they were able to see out the draw and extend their unbeaten streak to three — although they, too, were left rueing a few squandered counter-attacking chances.

For the first time in 2022, FC Edmonton have gone three straight matches unbeaten, having drawn against Valour and beaten HFX Wanderers in the two weeks prior to this game. Without a doubt, they’ve earned each of those results, as their defensive cohesion and organization without the ball seems to be improving each time they play.

For this game, head coach Alan Koch arranged his side in a familiar 5-3-2 formation, although it often functioned more as a 3-5-2 with fullbacks Wes Timoteo and Marcus Simmons given more license to get forward. Once again, Edmonton proved extremely difficult to break down, very rarely getting pulled out of position by Ottawa advancing upfield or playing passing combinations designed to create space.

As is often the case, the Eddies worked extremely hard to maintain their shape and win necessary duels in dangerous areas. The result was an impressive clean sheet, in which the opponent mustered just six shots (one of which was on target).

“This season shows the character that we have in our group, in terms of players, staff; it hasn’t been easy at all,” said Koch postmatch. “But we’re prepared to roll up our sleeves and get on with it, and I think you saw that today. Even at the end, the players were all fighting for each other, pushing each other, and I think that shows the growth of our group.

Ottawa manager Carlos González was full of praise for Edmonton’s defensive structure on Friday night, although he conceded that his own side was a bit too slow with the ball in trying to stretch the opponent out and get behind their back five.

González had spoken prior to the match about the difficulties of playing against a low block, and once again in this game his side had trouble creating top-quality scoring chances.

“I think we had a little bit of lack of some speed in certain moments where we found the spaces to attack,” González said. “The running in behind, we couldn’t get there. And in certain moments of the game they were in a low block so it wasn’t easy to run in behind. In some moments we have to have other solutions that today we didn’t have.”

Atleti captain Drew Beckie was a little more blunt than his gaffer, offering a simpler explanation:

“We were outworked tonight,” said Beckie. “At the end of the day, if you lose quality you can’t be outworked. There’s a lot for us to learn on that one; credit to them, they came in and defended well. They delayed the game, made it disjointed, and we got frustrated.”

Atlético Ottawa’s midfield — particularly the duo of Ollie Bassett and Abdou Sissoko is one of the most dominant units in the Canadian Premier League, and it’s been the table-topping club’s greatest strength for most of this season.

On Friday, though, it was actually the visiting Eddies who impressed in the centre of the park. They started with a triangle of Masta Kacher in front of Shamit Shome and Mamadi Camara, which held its own extremely well against Bassett, Sissoko, and Zakaria Bahous, although Bassett was still able to pick out a few excellent passes into the attacking third to spring some of Ottawa’s best chances of the night.

At halftime, though, Alan Koch made a tactical tweak to his side, sacrificing the attack-minded Kacher in favour of Simon Triantafillou. After that, his team sat a little bit deeper after probing more in the first half, as they looked more often for quick transitions or counter-attacks via Wesley Timoteo, Azriel Gonzalez, or Tobias Warschewski. The midfield trio remained fairly set in their shape to prevent Ottawa from building up through them or counter-pressing after an Edmonton break.

“That collective group helped us shut them down, and I think if you can shut Ottawa’s midfield down, you deny their attacking players like [Ballou] Tabla and Brian [Wright] up top to get the ball. For the most part our midfield did a very good job of that today.”

Indeed, the service to Ottawa’s frontline seemed to be cut off in the second half; although the hosts had far more possession in the latter 45 than in the first, their chances to attack were fewer and further between.

One of the key pieces of that Edmonton midfield on Friday — and perhaps the catalyst for their shutdown play in general for this match — Shamit Shome also gave credit to the backline behind him for executing their part of the job. With the midfield occupied with clogging things up centrally, the defenders behind had to be vigilant for long balls toward pacey attackers.

“We know their dangerous pieces are up top. Tabla can make something out of nothing, Brian Wright can make something out of nothing, so I think we did a good job collectively of managing those moments. The midfield locked it down, but credit to the backline for dealing with the long balls; maybe in the beginning of the season we wouldn’t have been able to deal with those long balls.”

The Eddies going toe-to-toe with one of the top midfields in the league — and arguably getting the better of that matchup — is perhaps one of the most impressive things they’ve done on this current three-game unbeaten streak.

On an evening where open-play attacking chances were very difficult to come by, Atlético Ottawa did the right thing on many occasions by attempting to win set-piece opportunities — which they were able to do frequently, especially with the Eddies breaking up the play with a few tactical fouls.

Ottawa had 10 corners in this match, but none of them really troubled the Eddies or goalkeeper Darlington Murasiranwa much. A few of their free kicks came from dangerous positions — spots from which Ollie Bassett has scored already this season — but those chances went wasted as well.

Atleti did try a variety of different set-piece strategies — balls to both the front and back post, for instance — although they did seem to prefer in-swinging deliveries, particularly through the six-yard box. Edmonton’s centre-backs, all three of whom are blessed with height, did well dealing with those balls, and Ottawa struggled to get them on net.

According to Centre Circle Data, heading into Friday’s match Ottawa were tied for bottom of the league in goals from headers — just one, apparently — and they’re fifth in the table in expected goals from set-pieces with 9.89.

Drew Beckie, whose aerial presence as a centre-back makes him one of the primary targets for those corners, took responsibility upon himself for not converting enough opportunities throughout the season.

“In world football, the most goals are scored on set-pieces,” he said. “We’ve got to find a way to be more dangerous; we have the players to do it. I look at myself first and foremost, I’ve had plenty of chances this year to put them on net and I haven’t. That’s very frustrating, and I can only look at myself, I can’t put my finger anywhere else. We’ve had good service in a lot of ways.

“We do work on corners, we have good movement, we have set plays. It’s not bouncing for us in certain situations… It’s good that we’re frustrated, it’s good that this feels like a loss because maybe it springboards us to refocus for this tough month of September.”

Wearing the armband for his hometown club on Friday, Shome was excellent leading the charge against one of the top midfields in the CPL. He won seven duels and had two successful dribbles, working very hard alongside Mamadi Camara to shut down some difficult opposition.