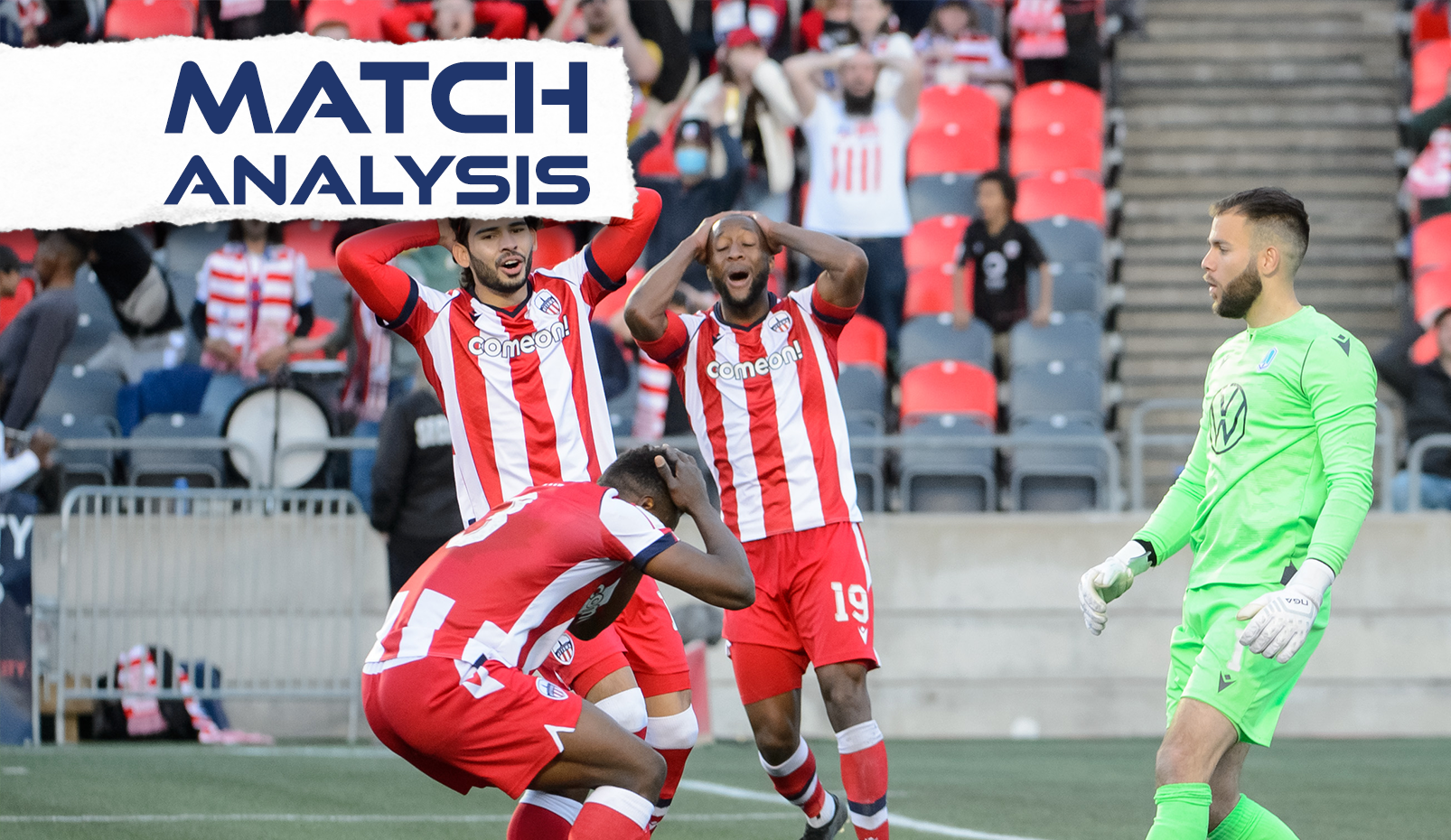 Pacific FC broke their winless and goalless drought with a 1-0 away victory over Atlético Ottawa courtesy of a goal from league-leading scorer Alejandro Diaz. But it was Callum Irving who deserves all of the headlines after the best goalkeeping performance of the 2022 season so far to frustrate an impressive Ottawa attack.

Atléti will be left wondering how they weren’t able to get a point in this match after firing 23 shot attempts, 17 of which came inside the box, at Irving’s net. The win is Pacific’s first away from Starlight Stadium this season.

It will be the lasting image of tonight’s game: Atlético players with their hands on their heads as wave after wave of attack ended in the hands of Pacific goalkeeper Callum Irving.

Irving made a stunning 10 saves during the game, three of which were considered “big chances”. It was his second clean sheet of the season, tying Ottawa goalkeeper Nate Ingham for the league lead in that category.

Irving was quick to point out that clean sheets are always a team stat first and foremost, and complimented the job done by the backline in front of him, particularly centrebacks Amer Didic and Thomas Meilleur-Giguère.

“Those two guys in front of me today were fantastic, Amer, I can’t count how many headers he won, in tough situations too, throwing his body around, same with Thomas,” said Irving “It is always a team effort.”

According to the stats sheet, Didic actually only won two headers during the match, while Meilleur-Giguère won four. But both were still excellent defensively, with Didic coming up with a crucial block on Malcolm Shaw late in the match to preserve the clean sheet.

The excellent performance was made all the more special by the fact that Irving spent three seasons playing professionally in the city with the Ottawa Fury.

“This was a place that I enjoyed playing for three years, enjoyed playing in front of the fans for three years, and still have a lot of friends here. So I was looking forward to this game a lot when I saw the schedule came out”, said Irving, later adding, “It is a place that I love coming to, and I’m all the happier that I was able to win here too.”

After scoring his first Canadian Premier League goal last weekend, Ballou Tabla looked all kinds of confident in today’s match. Instead of starting out wide on the right as he has most of the time for Atléti this season, Tabla was given more of a free role alongside Brian Wright up top.

In Tabla’s place out wide, Carlos Gonzalez handed 20-year-old Zakaria Bahous his first start. Tabla and Bahous combined well down the right flank to give Pacific fullback Jordan Haynes plenty of work, often doubling up on him in attack. Malcolm Shaw, who has mostly played alongside Wright up top this season, shifted to the left side of midfield for this match.

“We saw some positive qualities from the last match where we did play him upfront for the end of that match, we wanted to see if he could nurture that a little bit more and what would come out of that,” said Atlético Ottawa assistant coach Kwesi Loney. “Today you saw some of the results and what he is capable of doing in that role and that position so it was really positive for us today for him”.

Tabla’s heatmap during the match demonstrates just how much he moved around the attacking third, popping into different spaces where he could cause the Pacific backline issues.

It felt like the only thing Tabla wasn’t able to do over the course of 90 minutes was find the back of the net. He had three chances created, three shots on target, two successful dribbles and seven touches inside the Pacific box. He also won three fouls, continuing to extend his league lead in that category.

“He’s very dynamic, he moves all over the pitch, he finds good spaces, he takes good spaces, he creates and he’s a constant threat,” said Merriman of Tabla’s abilities. “He’s a good player, he caused problems for sure tonight.”

Pacific take their chance, while Ottawa will be left to rue missed opportunities

One side had 2 shots on target, one had 11. Yet it is the former, Pacific, that emerged from TD Place Stadium with three points tonight.

Ottawa absolutely peppered Irving in net, with 23 shot attempts in total, 17 of which came inside the box. But at the end of the day, while they consistently got themselves into good positions offensively, wasteful finishing cost them what would have been a big result.

“We can learn that we can have many chances, but if you miss and the other team with just one chance they can score,” said Tabla after the match. “You have to [consider] all the chances we get important, we can’t let them go because we don’t know if we are going to get another one. So we have to score them.”

The chart below shows shot attempts from both teams during the match, Pacific’s attempts on the left, and the barrage that Ottawa sent toward’s Irving on the right.

It is worth noting that while Pacific didn’t create nearly as many chances over the course of the game, they still had plenty of attacking quality. The expected goal numbers were only 1.48 to 1.21 in favour of the home side.

Ottawa was clearly frustrated by how the match played out. Their head coach, Carlos Gonzalez, was sent off while arguing that Diaz’s goal should have been brought back for offside.

It really doesn’t need much more explanation. With Irving, this match could have been ugly for the defending champions, but instead, they had back to the Island with their fourth win, and second clean sheet, of the season.

For Atlético Ottawa it is an incredibly quick turnaround, as they host York United at TD Place Stadium on Tuesday night (7:00 p.m. ET) in Canadian Championship action. Pacific, meanwhile, earned a bye as semi-finalists and will not participate in this round of the competition. They are next in action on Saturday, May 14 when they host FC Edmonton at Starlight Stadium (4:00 p.m. PT / 5:00 p.m. MT).