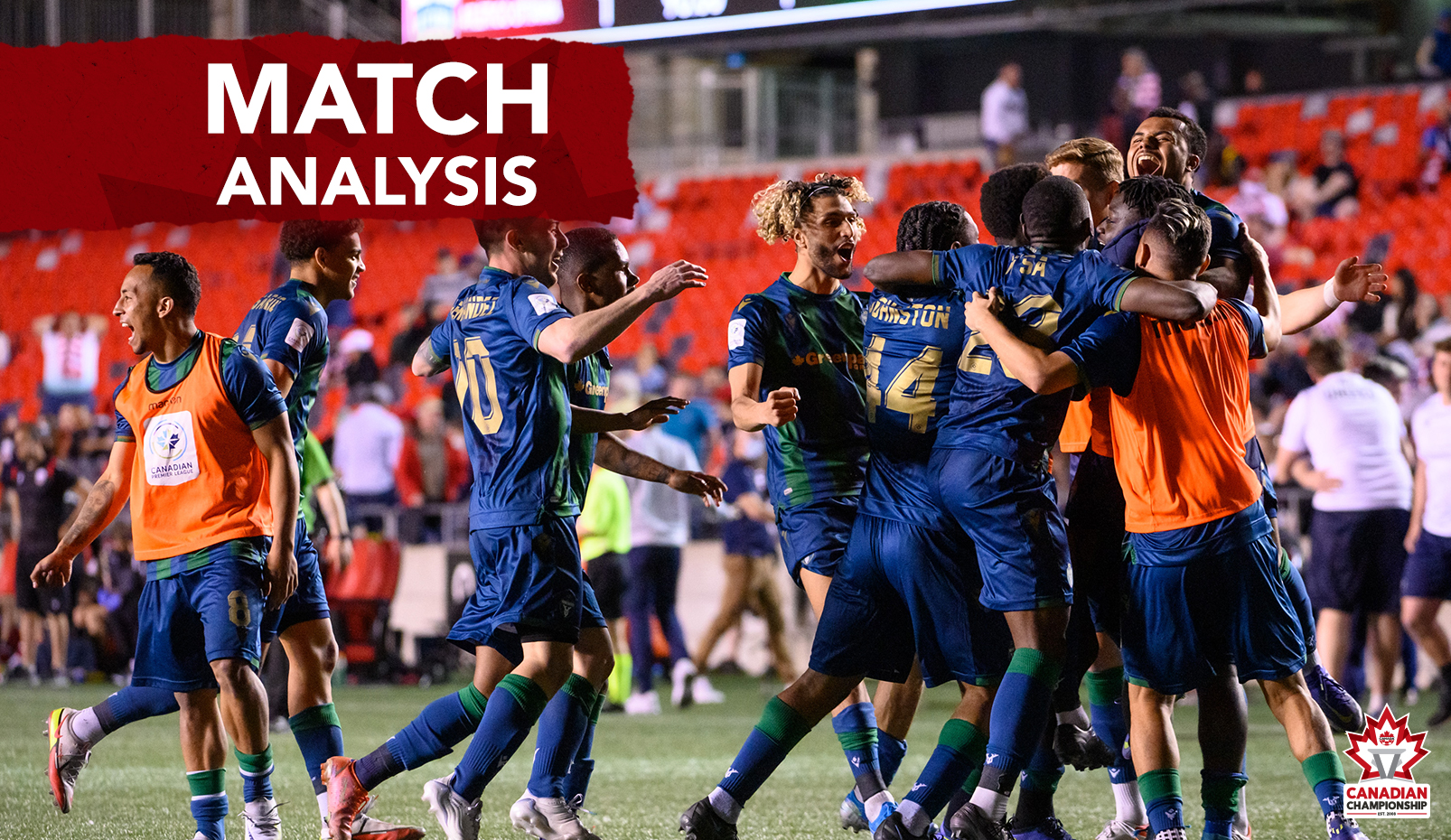 York United needed 90 minutes of play and eight rounds of penalty kicks before they were able to overcome Atlético Ottawa in the Canadian Championship preliminary round. Diyaeddine Abzi’s brilliant first-half goal was matched by a header from Malcolm Shaw. Cédric Toussaint scored the decisive penalty for York in his return from suspension.

York now heads to Starlight Stadium on Wednesday, May 25 to play Pacific FC in the quarter-finals of the competition.

It was perhaps a moment of redemption for York fullback Diyaeddine Abzi. Two weeks ago when York met Atlético Ottawa in the league, a poorly played backpass from Abzi onto the foot of Ottawa’s Ballou Tabla resulted in a goal and nearly cost his team the match.

Tonight, he played hero, scoring a breathtaking opener to put York United up early in the match, before converting a crucial penalty after Osaze De Rosario missed York’s opening attempt. Martin Nash shifted his system to allow Abzi the flexibility to find himself further up the pitch and it paid off in a big way, as no York player saw more of the ball.

“I thought it was a fantastic goal; he took it really well, he’s a really good attacking fullback,” said Nash. “I think he’s probably the best attacking fullback in the league by far and great to see him get his first goal of the season.”

In order to allow Abzi this freedom, York had right fullback Chrisnovic N’sa play a far more defensive role, often shifting into a back three with Jordan Wilson and Dom Zator while Abzi ran up the flank.

Nash had plenty of praise for N’sa’s performance after the match. “He was fantastic. We asked him to play a little bit of a different role today and not go forward so much and be a bit more of an anchor. I thought he did a tremendous job especially defensively.”

N’sa won two tackles, won all three of his aerial duels, had 94% pass accuracy and had three interceptions, including a game-saving sliding effort in injury time that took away a golden opportunity from Malcolm Shaw.

“Chrisno is just such a solid defender,” said York centreback Dominic Zator, “especially one-on-one it is difficult to get past him so for Jordan Wilson and myself it is so nice to have someone covering that whole side, we were always confident in his one-on-one battles.”

Ingham vs. Giantsopoulos makes for a fascinating penalty shootout

Many York United players were used to staring down Nate Ingham in the net during penalty kick situations. Only, it would have been last year, and Ingham was likely wearing a York United training top.

Having played for York the past three seasons before joining Ottawa, Ingham was plenty familiar with his opposing roster, adding a fascinating wrinkle to the eight-round penalty shootout. One of those familiar foes was York goalkeeper Nikolaos Giantsopoulos, who worked closely with Ingham last year. He too would have known his counterpart’s tendencies.

“To be fair they are extremely close friends as well, so I think they were trying not to talk to each other during the shootout,” said Nash. “Eduardo coming on at the end, I didn’t want too many players, to be honest, that Nate knew taking penalties. But we couldn’t really avoid it when it went so deep. He’s a very good keeper and he’s actually very good on penalties too so we did well to win the shootout, especially when he knows a number of our players.”

Knowing how critical spot kicks can be in cup competition, York made sure they were ready when the moment arrived.

“We practiced a penalty shootout yesterday after training,” said Nash. “I’m sure they did as well knowing that it could be a potential today, just to get the guys some confidence. It worked well.”

It was just as well that they did, as including this match seven of the eight all-time meetings between York United and Atlético Ottawa have ended tied after 90 minutes.

While his group did have just three days of turnaround between matches, Carlos González made the somewhat surprising decision not to start Atlético’s top two goalscorers last season, Brian Wright and Malcolm Shaw.

However, that nearly paid off for Ottawa when a fresh Shaw and Wright, along with Carl Haworth, came off the bench in the second half and instantly made an impact. Just five minutes after coming into the match, Shaw found the back of the net off a brilliant cross from Haworth.

Malcolm Shaw, right where he's supposed to be 😎@atletiOttawa restore the draw vs. @yorkutdfc, 1-1 on the hour mark of this #CanChamp battle 🏆🍁#CanPL | 🔴 https://t.co/7JFAUhgjL6 pic.twitter.com/CGRwJw6OEf

“Second half I thought they were the better team, to be honest, I thought we tired,” said Nash. “I know both teams played in short proximity and it looked like they tried to rest some of their better attacking players to finish strong and they did to be fair.”

The expected goals were an incredibly even 0.92 to 0.94 in favour of York over the course of 90 minutes, basically matching the scoreline. But in the second half, they were 0.47 to just 0.07 in favour of Ottawa, who for the second straight match will be left to bemoan missed opportunities.

González felt that York could sense where the match was going and ultimately played for penalties by killing time whenever they could. Frustrations boiled over late in the match while Austin Ricci was down receiving medal attention, resulting in York assistant coach Camilo Benzi being sent off.

Scoring his first goal of the season was just the start for the York fullback, who was truly influential in all areas of the park tonight. He won possession nine times over the course of the match, had three interceptions and 11 passes into the final third.

Atlético Ottawa has the unenviable task of travelling to Hamilton on Saturday, May 14 (4:00 p.m. ET), where they will meet a Forge side incredibly hungry to pick up their second win of the CPL season. York United, meanwhile, will look to consolidate their second-place spot in the league when they travel to Winnipeg to take on Valour at Investors Group Field on Sunday, May 15 (3:00 p.m. CT/ 4:00 p.m. ET). In the Canadian Championship, they’ll move on to play Pacific FC at Starlight Stadium in two weeks.