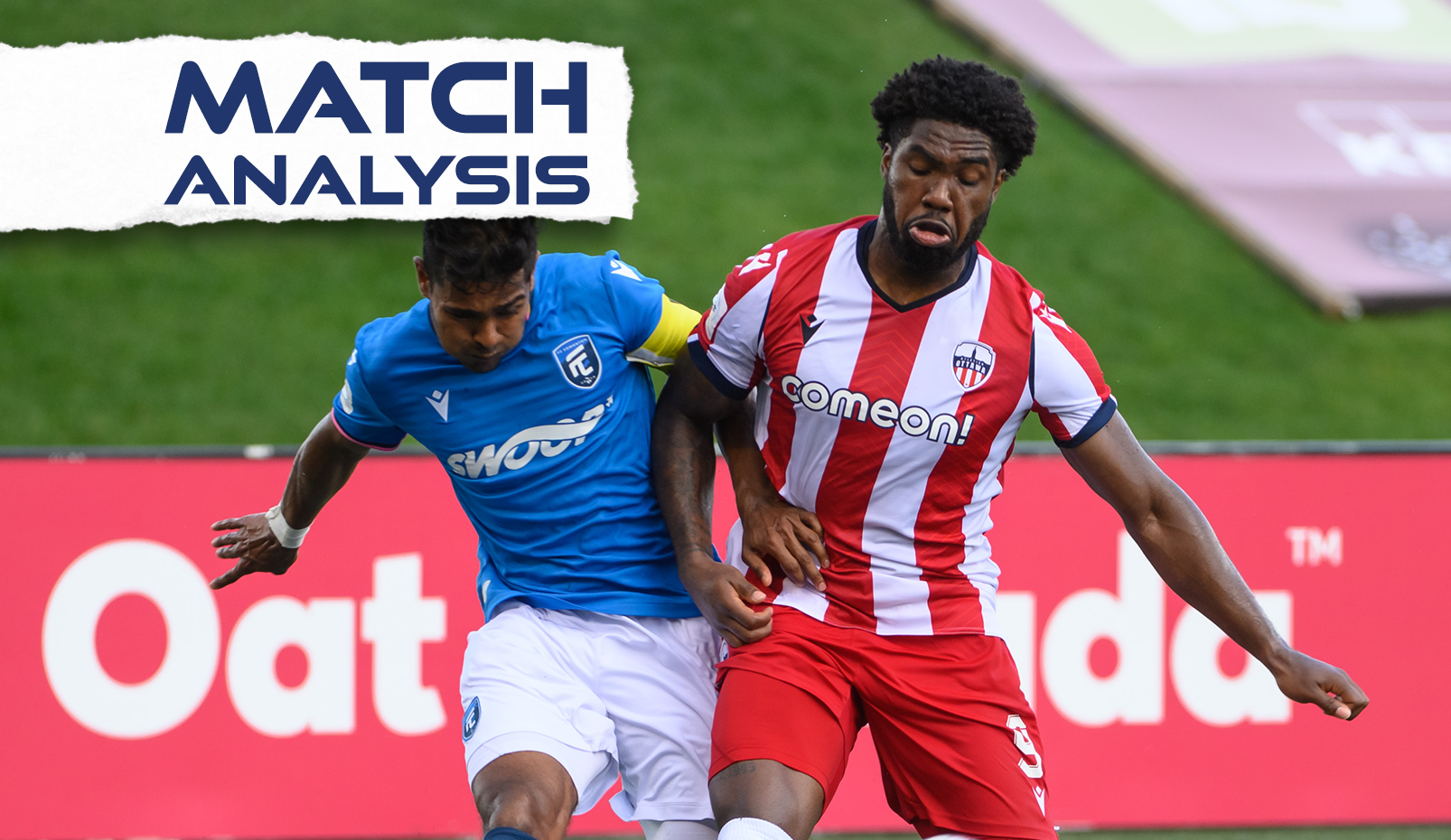 Atlético Ottawa returned to the win column on Sunday, surviving a torrential rainstorm and several lightning delays to defeat FC Edmonton 2-1 at TD Place. After a scoreless first half which saw both sides playing through a massive downpour, ultimately Ballou Tabla found the breakthrough in the second half for the hosts, scoring twice within five minutes to put Ottawa in front.

The Eddies found their way back into the game in the final few minutes as Tobias Warschewski scored a long-distance free-kick, but the equalizer eluded them and ultimately Ottawa secured all three points, moving up into third in the CPL table.

Atlético Ottawa have lined up in several different attacking formations this season, and while not all of them have been overly successful, they’ve done well recently in unlocking Ballou Tabla’s abilities. For this game, he was deployed in a more central position than where he usually plays, and he seemed to really benefit from the shift. The 23-year-old had freedom to drift between the half-spaces and wide areas, looking for spaces where he could run onto the ball.

Tabla finished the game with a stunning eight shots and five dribbles, serving as the main attacking force for his team — his strike partner, Brian Wright, had a far quieter afternoon, with one shot and just 16 touches.

Ultimately, this is exactly the kind of game Atlético Ottawa were hoping Tabla could deliver when they signed him; his talent has been well-known in Canadian soccer circles for a while now, but consistency has occasionally been an issue for him. So far this year, though, he’s been very effective under coach Carlos González in a number of different roles.

The job Tabla was asked to do on Sunday was a difficult one, which required him to cover quite a lot of ground and look for ways to get in behind Edmonton’s five-man defence.

“I love this position because I feel close to the opposite net,” Tabla said of his role in a front two. “I can receive the ball as a 10 or I can make some runs in behind because I create the space behind, so I think it’s a good position for me.”

His coach, González, explained that he was particularly happy to see Tabla rewarded with goals, suggesting that his confidence may have been in danger of dipping due to a lack of goals in recent weeks.

“I’m happy for him,” González said of Tabla postgame. “Forward players, they start to be sometimes in this dynamic in which psychologically they have an internal battle with the goal situations. He had two situations similar in the first half, and then in the second half he showed that he’s an excellent player. He showed personality… I’m happy for him so that he has unblocked now the situation and can play with a bit more psychological freedom that I think is very important for all of us.”

If Ottawa can continue to get Tabla on the ball in the attacking third, particularly with passes from the centre of the pitch through to him, they’ll be able to score a lot more goals going forward — which may be very important for them in improving on their +1 goal differential that lags behind all of their rivals in the top four.

The story of this game is a familiar one for FC Edmonton. They were tight and difficult to break down for most of the contest, and had a chance to nick a hard-earned point away from home until a very brief moment of switching off doomed them.

Similarly to last week’s loss at Cavalry, the Eddies were undone by individual moments they failed to manage. The first goal was a sloppy giveaway for which Abdou Sissoko was just a little hungrier to steal the ball, and the second was poorly defended as the backline failed to pick up Tabla sneaking behind them.

Once again, there’s plenty to like about how Edmonton played at times. They had 10 shots and won 53% of the duels in the game, doing well to win second balls and hunt for opportunities to counter-attack. Gabriel Bitar, in particular, played well in the middle of the pitch, winning 11 of  15 duels and producing three successful dribbles.

Still, once again, the Eddies head home empty-handed despite their efforts. Head coach Alan Koch was frustrated again postmatch, although fairly optimistic because of the positive moments his team created.

“I sound like a broken record, but our inexperience, our immaturity at times catches up with us,” Koch said. “Again today, we put up a good fight for about 70 minutes. Two minor, little mistakes — and a little bit of quality obviously from Tabla — and we’re losing the game. It’s not easy, we’ve played 19 games. Not every single game has been the same as this, but they’ve been pretty darn close.

“We come out, we’re organized, we’re hard-working, we give it everything we can, and unfortunately there are just moments that we struggle with, and that’s part of the growth of managing a very, very young team like we have.”

With their next match being next Sunday at York United — a team the Eddies defeated 3-0 last time they met — Koch’s side will be hoping to improve on their game management and ability to handle those individual moments that have let them down recently.

This match was a bit of a stop-start affair, with kickoff delayed over half an hour and halftime extended slightly due to lightning in the Ottawa area. The unusual timeline, as well as the period in the first half where the rain was falling in sheets, meant both teams struggled to find a rhythm in the game, especially in attack.

The fairly cagey play toward the end of the first 45 was an indicator of both teams perhaps not quite clicking, particularly in the rain when players likely had trouble seeing their teammates. The two coaches both acknowledged postmatch that the 15 minutes of rain changed the game significantly and was a very difficult period to play in; Ballou Tabla suggested he’d never played in anything quite like it, explaining that it felt heavy to run in with his boots so wet.

“That felt like the longest game I’ve ever played in my life,” added Eddies midfielder Gabriel Bitar. “Coming back from a halftime that was 30 minutes with thunder. But as a player you have to adjust and I think they did a better job adjusting than we did and they got the result.”

Certainly, this was a match of several distinct phases, with the football generally much better in the second half.

“The halftime meeting was very difficult,” Ottawa boss Carlos González admitted. “We were looking at the weather, what was going to be the weather in the second half. I think we played, like, two or three types of games in the first half, so we were preparing our brains to be capable to perform the best in any situation. I told them with rain, simplify and play it forward, try to avoid near passes. With no rain, keep the plan that we’ve worked on during the week and improve these details.”

Some serious weather conditions in the Canadian Premier League 😳 pic.twitter.com/hcbGobK98G

Thankfully, with the rain clearing up during halftime, the second 45 minutes were far better in terms of quality of play. Ottawa, especially, began to look more organized and were able to return to the game plan they’d worked on leading up to the match, creating attacks from midfield and trying to find Tabla in channels in the attacking third.

Ironically, Ottawa’s passing accuracy was actually worse in the second half (77.2% versus 82.6%), but they still nonetheless looked far more dangerous after the break.

Credit is also owed to the supporters at TD Place, most of whom stuck around during the rainstorm and delays. The Ottawa fans were rewarded in the end for their commitment, after what was a very important win for the club to bounce back from last week’s home loss to Forge.

A fairly easy choice, with two goals and eight shots from a very impressive afternoon of work. As mentioned, Tabla was the main talisman of Atleti’s attacking play, constantly getting behind the Eddies’ defence to cause trouble.