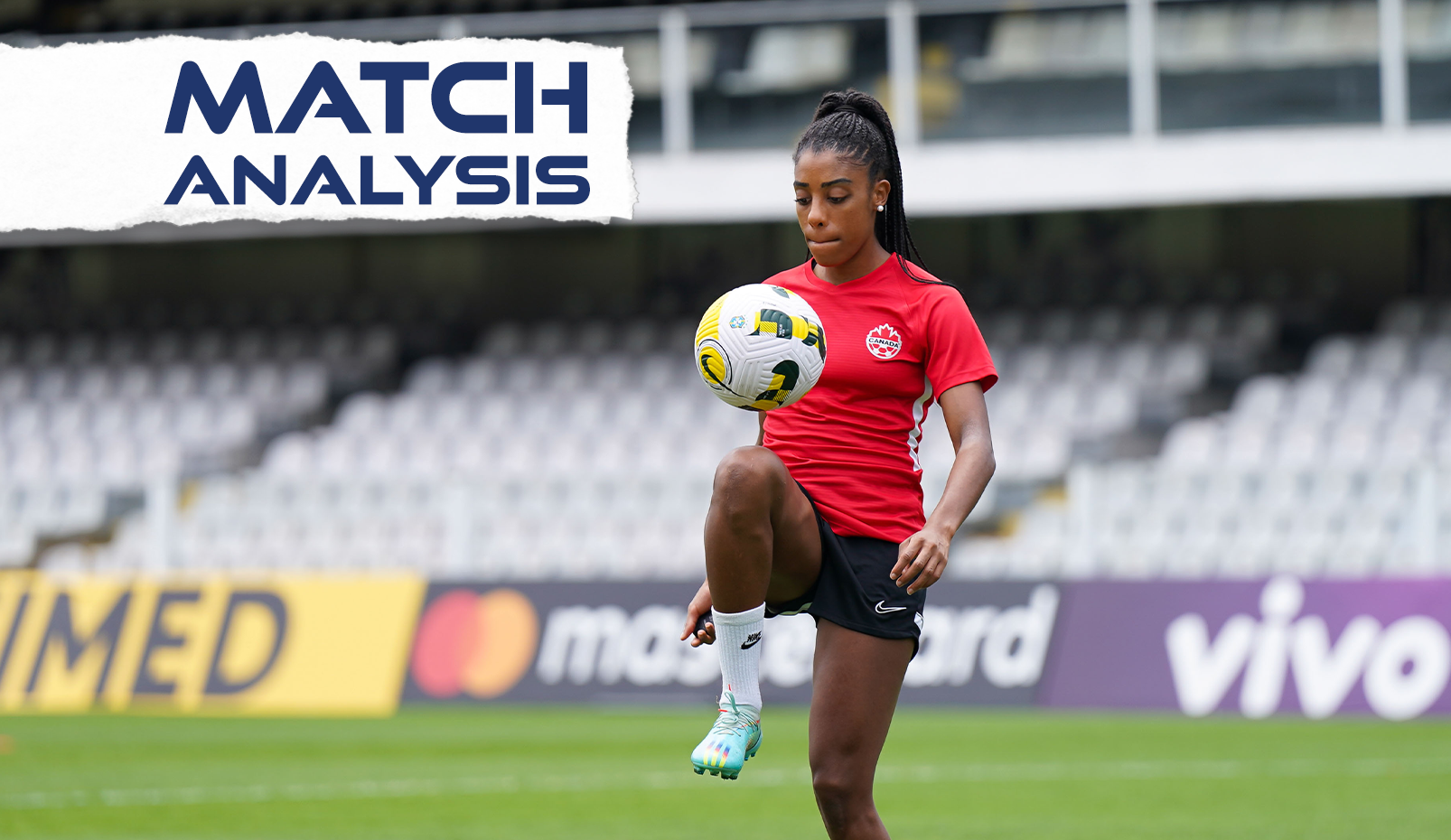 The Canadian women’s national team played their final match of 2022 on Tuesday, falling 2-1 to Brazil on a stoppage-time goal from Ana Vitória. The match was played in front of a loud and energetic crowd at the same stadium that Canada won their 2016 Olympic bronze medals, Neo Química Arena in São Paulo.

Right from the first whistle the Brazilians were playing with a lot of energy, pressing high up the pitch to try and win the ball back from Canada in good positions. On several occasions they were able to get a foot in and poke the ball free before counter-attacking, really testing Canada’s midfield duo of Quinn and Jessie Fleming, as well as the back four of Gabby Carle, Shelina Zadorsky, Kadeisha Buchanan and Ashley Lawrence from left to right.

Approaching the tail end of a scoreless end-to-end first half, the deadlock was finally broken a couple of minutes before halftime.

Kerolin charged forward to challenge Jessie Fleming, and knocked over the Chelsea midfielder with a strong challenge, deemed legal by the referee. From there, she sprinted through the middle of the park with the ball at her feet before laying it off to Bia Zanerotto, whose cross-goal shot took a deflection off Quinn before finding the back of Kailen Sheridan’s net.

Brazil break the deadlock vs. #CanWNT just before half-time, as Bia Zanerotto applies the finish after breaking through via a perfect through pass

Minutes into the second half, Fleming nearly got her redemption. She made an undetected run to the back post where she met a cross from Cloe Lacasse with a header. Fleming’s header, from a difficult angle, went just high of the target, but it was a promising attacking play from Canada as they looked to equalize.

The Canadians would level the match a few minutes later, however. After winning the penalty herself, Ashley Lawrence stepped up to take it and buried it into the back of the net, sending Brazilian goalkeeper Lorena the wrong way.

ASHLEY LAWRENCE equalizes from the spot 🎯

The #CanWNT go 1-1 vs. Brazil at the hour mark after a handball in the box concedes a penalty

Evelyne Viens nearly gave Canada the lead in the 68th minute, heading a great cross from a Jessie Fleming toward goal, but Lorena made a fantastic stop in the Brazilian goal to push the ball off the crossbar before someone was able to clear it away.

With the clock running out in stoppage time, Brazil took the lead. A few Canadians were caught ball-watching, and after Sura Yekka got her body in front of an initial effort, but young midfielder Ana Vitória was able to poke home the winning goal.

Brazil go up 2-1 in added time off a corner, and the #CanWNT are stunned 💔

More worrying for Canada might be a late injury to Nichelle Prince. Prince landed cleanly when going up for a header, but immediately went to ground with a Brazilian player helping her to sit down slowly and wait for treatment. Prince was visibly distraught, and would be carried off the pitch on a stretcher, seemingly pointing at her ankle. No update on what was troubling her was immediately available.

It was a disappointing end to what was a strong year for the women’s national team. The loss snapped a five-game winning streak, but facing such tough tests against top opponents is exactly what Bev Priestman’s team expected, and needed, as they continue to prepare for the 2023 World Cup.

Tactical flexibility on display as Priestman experiments with her lineup

Bev Priestman made four changes for Tuesday’s match from the side that beat Brazil 2-1 on Friday, tinkering with the personnel and positions of several players.

Kailen Sheridan started in goal again, with Shelina Zadorsky and Kadeisha Buchanan again the centre-backs. Ashley Lawrence moved from left back to right back, allowing Gabby Carle to step into that left back role. In central midfield, Fleming was again half of the double pivot, but joined by Quinn as opposed to Julia Grosso, with Christine Sinclair in the number 10 position in front of them.

Cloe Lacasse came in on the left flank and Jordyn Huitema started up top, replacing Nichelle Prince and Evelyne Viens, respectively, while Adriana Leon kept her spot on the right side of the attack.

Carle was the busiest of the four new players, often targeted by the Brazilian attackers down their right hand side, but the Canadian defender put in a very strong shift, often able to match the pace of her opponents before attempting to win back the ball. She made a handful of sliding tackles to halt counter-attacks, composed under pressure for the majority of the match.

At times, Carle and Lawrence would switch sides — Lawrence at left back and Carle on the right. Priestman seemed to be using her defenders to follow certain favourable matchups, something only possible thanks to both of them having the ability and flexibility to play on either side.

Lawrence also won, and scored, the penalty that temporarily tied the match for Canada just after the hour mark.

ASHLEY LAWRENCE equalizes from the spot 🎯

The #CanWNT go 1-1 vs. Brazil at the hour mark after a handball in the box concedes a penalty

Quinn was involved in a few important defensive plays, although their lung-busting run to block Bia Zanerotto’s opening goal was for naught in the end. Despite Quinn getting a foot to the ball, Zanerotto’s shot was too powerful and deflected off the Canadian midfielder and past Sheridan to open the scoring.

Lacasse and Huitema were both involved as well, but the attacking unit as a whole wasn’t clicking as well as it needed to, and a few opportunities failed to challenge Lorena in the Brazilian goal. They will have better days, and some of the runs that were being made will be something that Priestman and her staff will be able to build on when the team next comes together for a camp early next year.

Priestman was also happy with the partnership between Jordyn Huitema and Evelyne Viens after the latter player came off the bench in the second half and Huitema moved from being a striker up top to operating on the right side. Priestman called the partnership “outstanding” and said that the players combined well.

“I think they all had really bright spells,” Priestman said of the four players brought into the team. “They bring different things as well, and that’s where it’s exciting now.

“You’re seeing combinations of different players coming in, and we’ve had to do that through the injuries — we have quite a few players missing —  but it does give an opportunity to assess new things, try different starting positions, finishers, and they all bring something different. When you’ve got that in your team, it’s a really good thing to have.”

Brazil press ruthlessly, use high tempo to their advantage

Canada are in the midst of World Cup preparation now as next summer’s tournament rapidly approaches. It’s important when tasked with facing some of the top teams in the world that you prepare by facing the calibre of opponent that you will come up against in the latter stages of a major tournament. It worked for Canada ahead of the Tokyo 2020 Olympics, and it will be a big part of their leadup to the World Cup.

On Tuesday, Brazil put in an inspired performance in front of a passionate home crowd in São Paulo, and caused a lot of problems for Canada. They were pressing high up the pitch, eager to win the ball back and quickly counter-attack. They picked off a few passes and weren’t afraid to go in on any tackles, playing with an intensity you might not always expect in an international friendly match.

It was that high press and quick counter-attacking prowess that saw Brazil score their opening goal. Jessie Fleming was on the ball in midfield and Kerolin charged in, wrestled the ball free and shot down the pitch against the backpedaling Canadian defenders. She then laid it off for Bia Zanerotto, who fired the home side into the lead.

Brazil break the deadlock vs. #CanWNT just before half-time, as Bia Zanerotto applies the finish after breaking through via a perfect through pass

The match had several moments like that, especially in the first half, and it’s a performance that Priestman and her team are eager to learn from.

“That’s the reason we came here,” Priestman said after the match. “It would be very easy to stay away from top tier opponents, but you look at the Arnold Clark Cup, you look at this game, and we have to challenge ourselves because in many ways only the likes of Brazil are going to punish you in those moments.

“We learned from that. The last time we lost to Brazil we went on and won a gold medal, and we learned from that game at the SheBelieves Cup (in early 2021). We went on a good run after that. This team, often when we lose, is when we’re at our best. In many ways, these are the best things that can happen to you because you grow.”

Canada conceded a late winner in this match, with Ana Vitória putting the ball over the line two minutes into stoppage time before wheeling in celebration in front of an impressive crowd at Neo Química Arena in São Paulo.

It was a disappointing goal to concede for Canada, as a moment of being switched off on a set piece turned a come-from-behind 1-1 draw into a 2-1 defeat.

Brazil go up 2-1 in added time off a corner, and the #CanWNT are stunned 💔

“I thought our second half was a lot better and stronger,” said Priestman after the match. “I think we need to learn some lessons, on that set piece (at the end of the match for the winning goal) we switched off…they’ll learn from that, that will never happen again.

“The nature in which we lost, it sucks to end the year like that.”

To make matters worse for Canada, Nichelle Prince went down pointing at her ankle after a non-contact injury late in the match, visibly distressed and in a lot of pain.

She went up for a header and seemed to land normally, but when she tried to chase the ball she wasn’t able to put weight on her right leg and a Brazilian player helped her sit back down on the ground. A stretcher was required to take the distraught Prince off the pitch.

Priestman had no specific updates on the injury after the match, but said that Prince was “in a lot of pain” and that “her teammates are concerned about her”.

We're thinking of you Nichelle ❤️

Overall, it was a solid year for the team. They booked their spot in the 2023 Women’s World Cup and won 11 of their 17 matches in 2022 — finishing with an 11-3-3 record. All three losses were by a single goal, with the other two coming a 1-0 defeat to Spain at the Arnold Clark Cup in February, and a 1-0 defeat to the United States in the final of the Concacaf W Championship in July.

Next year, the World Cup will be the focus as Canada look to win it for the first time, but the leadup to it, as well as Olympic qualification games next September, are also on the horizon.

Jessie Fleming ran the show for Canada in midfield, and looked dangerous from set pieces all afternoon long.