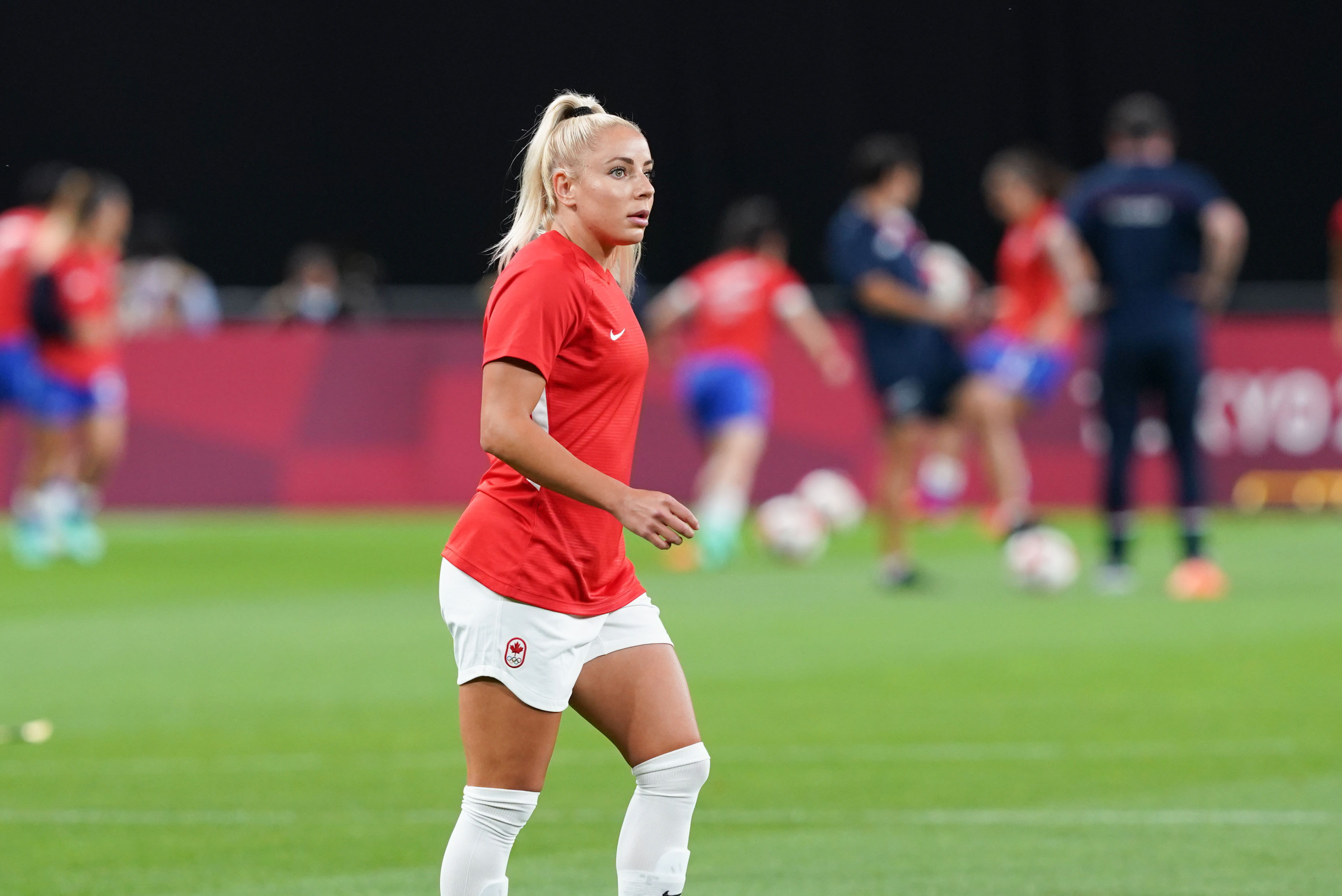 A second-half goal from Adriana Leon opened the scoring, but Canada again conceded late, as they drew 1-1 with Great Britain on Tuesday — sealing a spot for both sides in the quarter-finals at the Tokyo 2020 Olympics

A long shot from well outside the penalty area was the biggest test for Stephanie Labbé in the first half, but calling it a test would be overselling it, as the Canadian goalkeeper stopped it with ease. Canada’s best chance came off the foot of Évelyne Viens, who fired a shot wide of the goal moments into the match.

They entered the break tied at 0-0, with Great Britain looking the more comfortable of the two sides, and largely getting the better of the scoring chances, missing crosses and balls into the box by the smallest of margins.

Perhaps against the run of play, Canada would be the team to score first about 10 minutes into the second half. After Ashley Lawrence came flying down the left flank, she played a low cross into the penalty area. A few players whiffed on attempted shots and clearances, and the ball found its way to Adriana Leon. With her first touch, Leon fired a perfect shot into the top right corner of the goal, giving Canada the lead and temporarily moving them to the top of Group E.

Pushing for an equalizer, Caroline Weir fired a shot from a tight angle in the 68th minute. It beat Labbé but came down off the crossbar, and then off the post, in an effort that was inches from seeing Great Britain tie it up at one goal apiece.

As time slowly ticked away, second half substitutes Ellen White and Kim Little had chances to equalize, but it would be Weir who eventually created the tying goal. Taking a shot from outside the box, a deflection off Nichelle Prince left Labbé stranded on the wrong side of the six yard box and unable to get across in time to keep the ball out of the back of her net.

In the end a 1-1 scoreline seems like a fair result. Great Britain were the better team until Canada scored, and despite stepping on the gas and getting on the front foot thereafter, Canada were unable to find a second. Canada will again be frustrated by conceding late, but a draw against a strong Great Britain side is a positive result overall, and sees them qualify for the quarterfinals as the second-place team in Group E.

Canada will have a difficult route to the podium, as they take on Brazil in the quarter-finals on Friday and are also on the same side of the bracket as the 2019 World Cup finalists from Netherlands (who have scored 21 goals in three games), and the winners of that 2019 final, and longtime rival, the United States.

Canada head coach Bev Priestman opted to rest several regulars against Team GB, with one eye on a quarter-final on Friday, making seven changes in total to the side that played against Chile on Saturday.

Christine Sinclair and Desiree Scott, who started against Chile, missed out on this match, while Allysha Chapman and Erin McLeod were the other players held out of the matchday 18-player squad.

The other players from Saturday who were limited to a spot on the bench were Kailen Sheridan, Shelina Zadorsky, Julia Grosso, Nichelle Prince and Jessie Fleming.

It was a big opportunity for Deanne Rose in particular, who impressed off the bench against Chile. She’d play 45 minutes before being replaced at the break, never really making a huge impact on the match. After starting Canada’s first two matches, Jessie Fleming came off the bench at halftime for Canada, along with Jordyn Huitema, replacing Rose and Janine Beckie. Priestman also gave an Olympic debut to Gabrielle Carle, who replaced Ashley Lawrence in the 81st minute.

The rest and rotation should help Canada remain fresh as they prepare for a quick turnaround, with the quarterfinal just three days away.

For parts of Tuesday’s match, Team GB weren’t letting anything penetrate their organized defensive setup. Playing in what seemed to be a 4-5-1 formation, they were ruthless in midfield as the always-solid trio of Sophie Ingle, Caroline Weir and Jill Scott patrolled central midfield.

Canada have played out of the back a lot during this tournament, something that worked well with Great Britain’s gameplan. Every time the ball found its way to the feet of Labbé, Kadeisha Buchanan or Vanessa Gilles, Great Britain came charging in, looking to force errant passes and opportunities to win the ball high up the pitch.

That strategy worked on a few occasions, with Nikita Parris among the players to get good scoring opportunities as a result. They were unable to find the perfect pass or shot to put one in the back of the net in the end, but there were multiple occasions where the pressure was certainly mounting.

A superstar in the sport, and 2020 FIFA Women’s Player of the year winner, Lucy Bronze is a key part of the England and Team GB national teams, but on Tuesday was outmatched by a strong performance from Canadian left back Ashley Lawrence.

Lawrence was glued to Bronze all night, not afraid to get physical with her, and running her down in the rare occasion that she slipped away. The British right back looked visibly frustrated throughout, and it impacted her performance.

Errant passes to get rid of the ball before inevitable tackles from Canada’s left side were the story of the match, forcing Great Britain to instead focus on attacking down the left and centrally, as Manchester City duo Georgia Stanway and Demi Stokes in particular had a lot of touches on the left flank.

If Bronze had won the battle on her side, as she so often does, this match could’ve ended very differently, but Lawrence in particular showed again why she is world-class and absolutely vital to this Canadian team.

Canadian defender Ashley Lawrence was sensational at left back in this match, shutting down Lucy Bronze and creating Canada’s goal.

Both teams qualified for the quarterfinals with the draw. Canada will take on Brazil on Friday morning (4 am EST/ 5 pm JST), while Great Britain face off with Australia, with kickoff set for an hour later. All Canada matches can be watched on CBC.