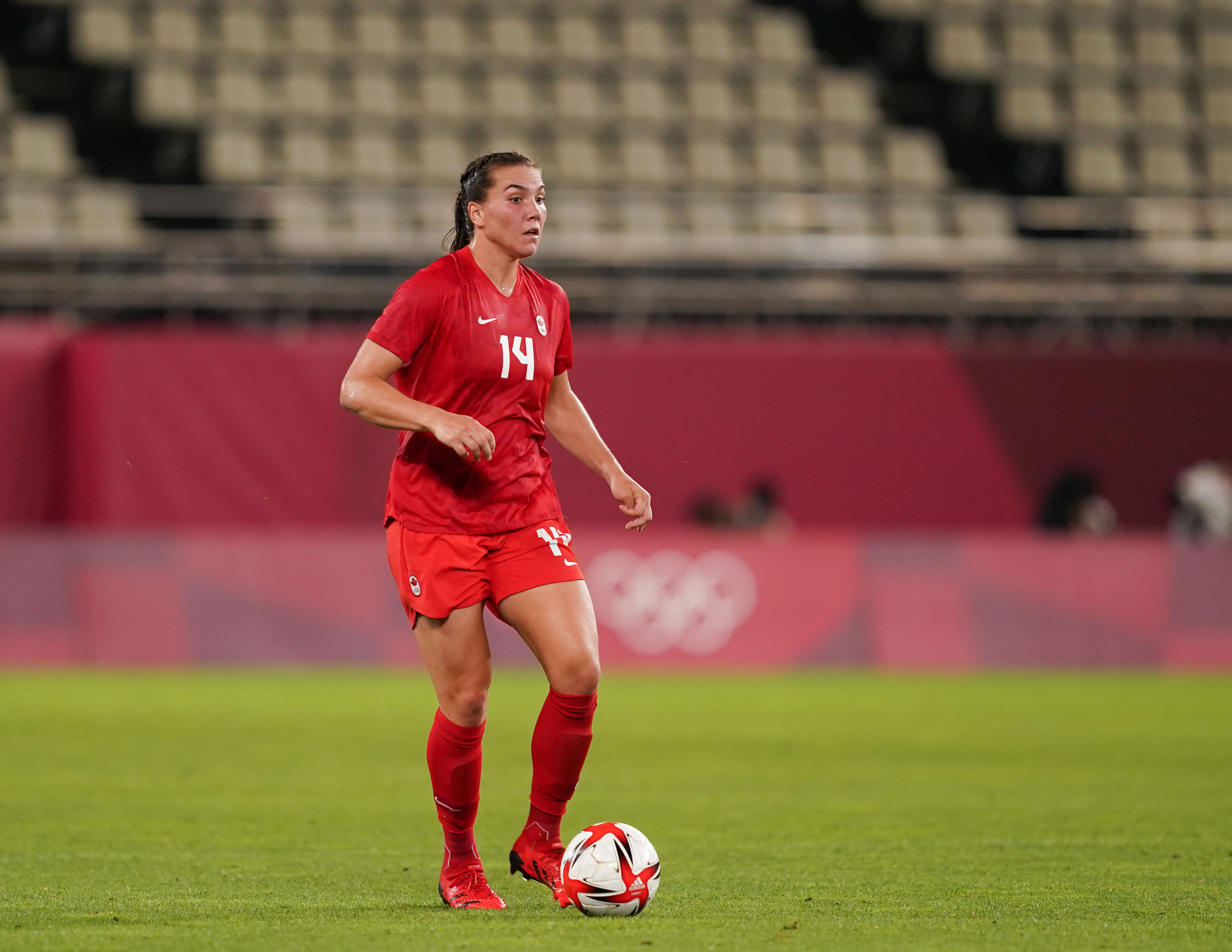 It took more than 120 minutes, and heroics in a penalty shootout from Stephanie Labbé, but Canada are going back to the semifinals at the Olympic Games for a third time in a row. The Canadian goalkeeper stopped Brazil’s last two shots from 12 yards out, earning her team a chance to play for a medal. A match on Monday will decide what colour that medal is.

Bev Priestman made five changes from the team that started against Great Britain, bringing Christine Sinclair, Nichelle Prince, Jessie Fleming, Desiree Scott and Allysha Chapman back into the starting lineup.

Canada’s first look at goal came about 20 minutes in, as a perfect cross from Ashley Lawrence — playing at right back in this match — found Christine Sinclair in the penalty area. Sinclair was unable to control it, but the ball was redirected off her into the arms of the Brazilian goalkeeper.

Jessie Fleming had a go from long range a few minutes later, but she pulled her shot inches wide from the edge of the penalty area as Canada continued to try and get off to a good start. Despite putting Brazil under a lot of pressure, especially in the opening 30 minutes, Canada were unable to find the back of the net in the first half.

Brazil created a few chances as well as the momentum shifted in their favour. They came closest in the 40th minute, as Debinha ran in alone on goal after stealing the ball from Vanessa Gilles. A rushing Stephanie Labbé was able to get in front of her shot, keeping it at 0-0 entering the break.

Vanessa Gilles nearly gave Canada the lead just before the hour-mark. The centre-back beat those marking her in the air, heading the ball toward goal, but her header came crashing back off the crossbar.

With both teams pushing for a winner, the pace picked up again as the clock kept ticking, but neither side were able to find the back of the net in regulation time. An exciting end to the second half failed to provide the winning goal. After 30 more scoreless minutes in extra time, penalties were required to decide the winner.

Christine Sinclair stepped up first, but had her shot stopped. Brazil and Canada traded successful penalties for a few rounds after that, and it seemed as though the first penalty of the shootout would be the decisive one, but Stephanie Labbé had other ideas.

She stopped the final two Brazilian penalties, winning the penalty shootout 4-3 for Canada and sending them through to the next round at Tokyo 2020. It also snapped a four-game winless run for Canada against Brazil.

It was a dramatic, emotional win for Canada — judging from the passionate speeches on the pitch from players and Bev Priestman after the match — and one that they can build on going into the next round.

Stephanie Labbé the hero on penalties, throughout the match

While her performance in the penalty shootout is what people will remember, Stephanie Labbé was brilliant in goal for Canada on Friday, stopping several shots throughout the match as well to keep Canada alive.

By rushing toward Debinha in the first half, Labbé was able to deny the Brazilian attacker an opening goal, also stopping several long shots and claiming most of the crosses played into her penalty area. Her best stop in the 120 minutes of open play was turning away an effort from close-range in the final moments of extra time that seemed destined for the bottom corner.

She has repeatedly put her body on the line for her team at Tokyo 2020, and did so again on Friday, challenging Debinha in the air in extra time to make sure she got to a ball first. She went down hard, but as she did in the tournament opener against Japan, wanted to stay in the game. While she was forced out of that match, she stayed in this one, and the rest is history.

Brazil unable to capitalize on momentum at crucial moments

While causing problems for the Canadian backline all night, Brazil (like Canada) were just missing the final finish to take the lead.

Legendary Brazilian attacker Marta looked inspired to push her team to the victory, and took her penalty in the shootout well, but like the rest of her team, failed to capitalize on moments where they were putting Canada under a lot of pressure.

For the final 15 minutes of the first half, and a sizable chunk of extra time, the Brazilians were on the front foot, forcing desperate tackles and clearances from Canada’s defenders, but just couldn’t get the ball over the line. They probably played well enough to pick up the result, but indecisiveness at times in the final third saw them take several shots from long range instead of trying to get into better areas, which is one of the things that let them down on the night.

Penalties are a cruel way to lose any match, but for a Brazil squad with an aging core, this one will sting even more for a while.

Vanessa Gilles steps up on defence, in the shootout

Apart from a first-half error that handed Debinha a breakaway in on goal, Vanessa Gilles was very impressive again at centre-back. Never shying away from a tackle, Gilles made several key challenges, including a crucial sliding tackle in the second half to deny an attacker another one-on-one with Labbé.

One of Canada’s best players in the air, Gilles also turned away several high balls into the box, and nearly scored the opening goal for Canada with her head at the other end of the pitch. Redirecting the ball toward goal with a strong header, Gilles’ effort beat the goalkeeper but couldn’t sneak under the crossbar, coming back off the woodwork as the match remained scoreless.

Gilles’ timing, both in the air and on the ground, is second-to-none and Bev Priestman’s decision to hand her a start proved to be the right one.

The icing on the cake? It was Gilles who stepped up and converted Canada’s fifth penalty, opening the door for Labbé to send Canada to the semis.

Coming up big all night long for Canada, it was Labbé who also made a pair of crucial stops in the penalty shootout to lead Canada into the semifinals at a third-straight Olympics.

For Brazil, it’s the end of their run at Tokyo 2020. Canada, meanwhile, move onto the semifinals, a match that will take place on Monday against the United States of America.