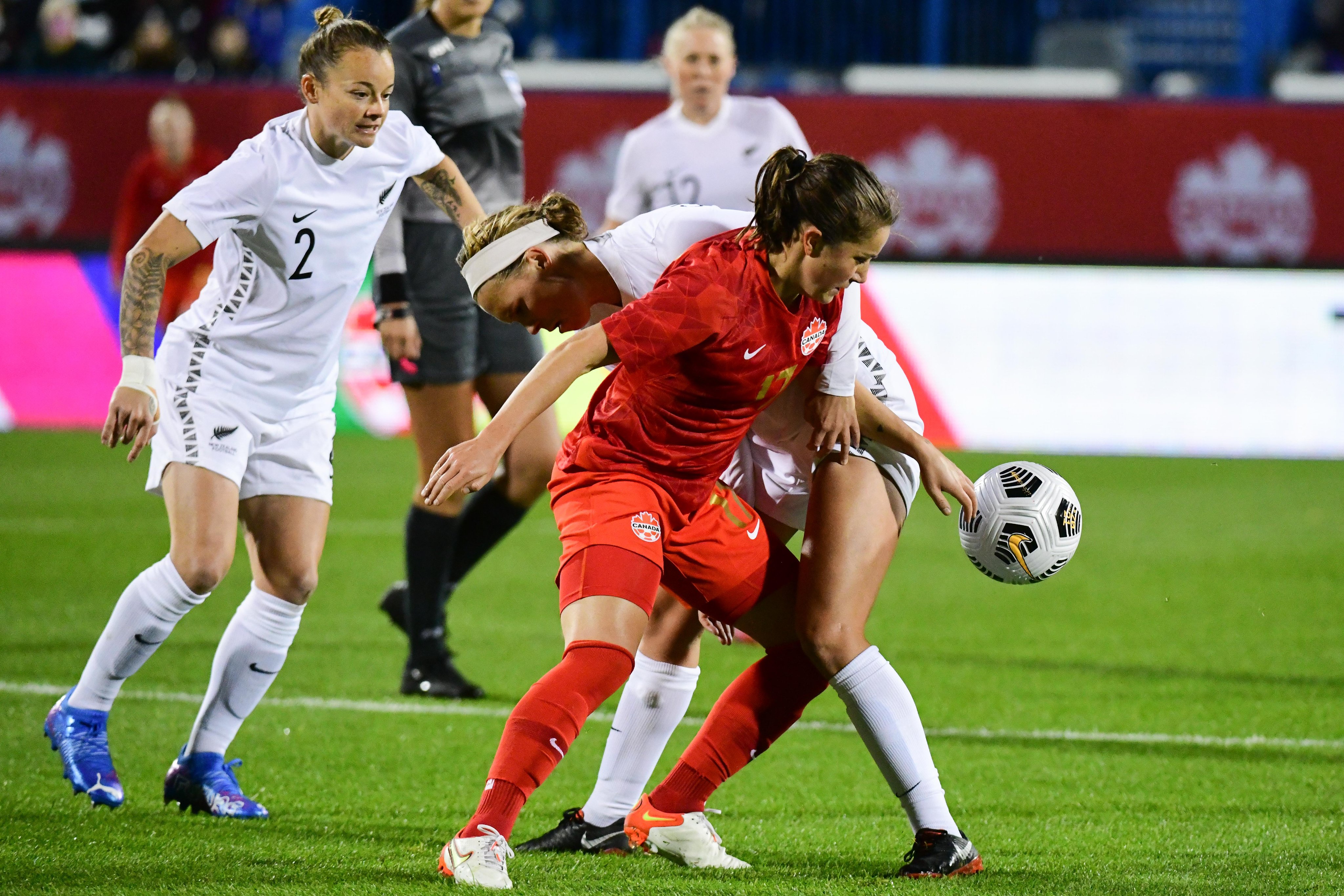 Canada’s Olympic gold medal celebration tour continued with a 1-0 victory over New Zealand in Montreal on Tuesday. Adriana Leon, after scoring twice in Ottawa on Saturday, gave Canada the lead in the 16th minute, firing home a rebound after Janine Beckie’s shot was saved by Anna Leat. New Zealand looked much more organized than they did on Saturday, and were the better team for parts of Tuesday’s rematch. The visitors came closest in the 26th minute, as Ria Percival forced a big save out of Stephanie Labbé, but an equalizing goal would never come.

After scoring twice in the final 15 minutes of Saturday’s match off the bench, Adriana Leon continued to impress offensively on Tuesday. Given the start for this match, it was her goal that won it for Canada.

Following a diving save from Anna Leat to deny Janine Beckie’s low shot across goal, Leon pounced on the rebound and fired it past the New Zealand goalkeeper to give Canada the lead in the 16th minute.

It would end up being the only goal of the match, but Leon tested her West Ham United teammate again early in the second half, with a volleyed shot from a Jayde Riviere cross that forced a leaping save.

She also works very hard off the ball, to create spaces and opportunities for her teammates. Her fellow attackers, including Deanne Rose and Christine Sinclair — who again played in a deeper false nine role — had opportunities to push into the box and get shots away, although none of them would end up finding the back of the net on Tuesday.

“Adriana Leon stepped up and put the ball in the back of the net again, credit to players who are doing that,” said head coach Bev Priestman after the match.  “We want to be a team that can get numbers higher, and not be a team that sits back and brings that aggression.”

“I feel like I’m in the best form of my career right now,” said Leon after the match. “I’m feeling good physically and mentally, so excited for the future.”

New Zealand head coach Jitka Klimková, taking charge of just her second match in her new role on Tuesday, was pleased with the progress they made after Saturday’s 5-1 defeat in Ottawa.

She spoke after that match about wanting to be better defensively, and her team gave her just that following some work between games to change up their approach.

“It was a different approach today,” Klimková said after the match. “We defended on our front foot, we put the pressure on the ball straight away, and we won the ball a little bit closer to the opposition goal, which led us to creating more chances.

“I’m very pleased with the improvement we made, and I would say the next step is to start winning those games.”

While they had the same number of shots (six) and shots on target (two) as Saturday’s match, the defensive improvements were substantial. They cut down the number of shots allowed significantly, facing just 10 compared to Saturday’s 24. Only three on Tuesday were on target, and the only goal allowed was a quick reaction goal from Leon, that Anna Leat realistically had little chance of keeping out.

The high press was effective, as they won the ball back a lot more higher up the pitch, and in the second half especially seemed to have a lot more possession in Canada’s half.

Considering it was just their second game under the new coach, there was a lot to like from the Football Ferns.

“It’s definitely been a challenge for us, but one that we’re definitely willing to take on completely, especially coming into the World Cup in a few years’ time,” said New Zealand defender C.J. Bott about her side putting a focus on trying to play out of the back and control the ball more in the past two matches.

“It’s new for us, we’ve been such a defensive-minded team for such a long time and it’s really exciting having Jitka and the other new coaches on board, really challenging us and encouraging us to play football for the first time in a long time.”

Tuesday’s match against New Zealand offered a rare chance to play in front of friends and family for Canada’s Quebec-born players. Gabrielle Carle started the match, playing all 90 minutes, while Évelyne Viens and Vanessa Gilles both came off the bench in the second half.

“I don’t think I even know the extent of the number of family and friends I had in the stands tonight,” said Carle, speaking to the media after the match. She added that she had never played in her home province before at the top level, a sentiment shared by Viens.

“It was so great to play at home, the crowd showed up and were so loud for us,” said Viens after the match. “It was for sure a unique experience for me, and for the whole team.”

Viens said that there were about 20 friends and family members in the crowd. “I think it’s for sure the first time that my family saw me play since I’m a professional, so it was unique for them and for me too,” she added.

Players from the west coast — including captain Christine Sinclair and midfielder Julia Grosso, scorer of the gold medal-winning penalty — will likely have a chance to get that same experience in the not-so-distant future, with Bev Priestman saying that Canada Soccer is finalizing plans to host celebration tour games there as well, but that no details are confirmed.

The Canadian striker was in the right place at the right time to score the winning goal for her team, and her third in two matches.

While nothing has been confirmed yet, it is expected that the Canadian women’s national team will play more celebration tour games in other parts of the country — possibly as early as November.