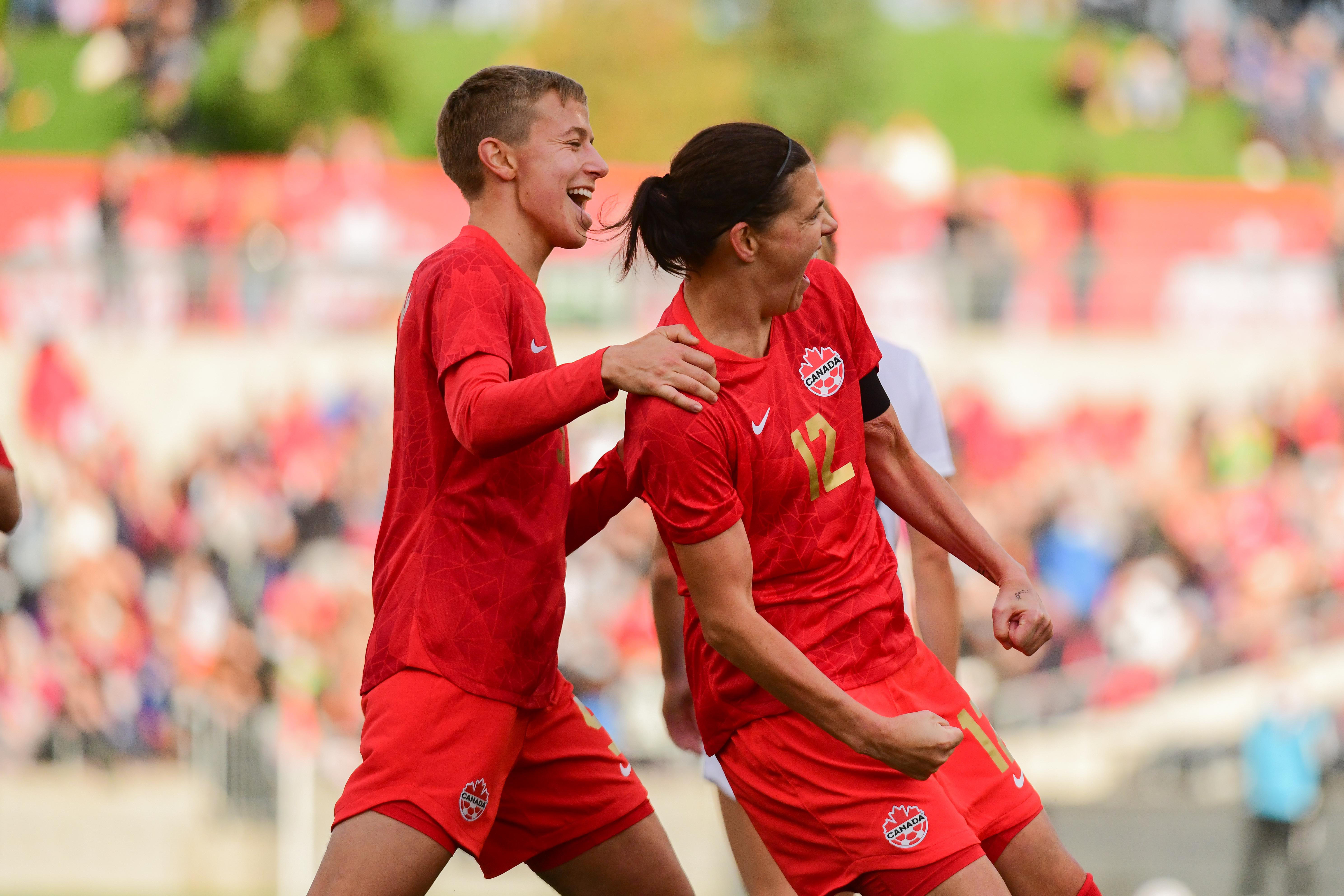 A total of 16, 386 fans in Ottawa were treated to a thriller on Saturday as the Olympic champions continued their run of good fortune with a dominant 5-1 win over New Zealand.

While the visitors looked to strike first, Canada would open the scoring thanks to Jessie Fleming’s penalty before some smart thinking from Christine Sinclair doubled the lead just before the break.

After half-time, the goals continued to fly for the hosts with Nichelle Prince and Adriana Leon getting in on the action to bring Canada’s tally to five. Ria Percival managed to pull one back for the visitors from the penalty spot.

Despite only getting to Ottawa a few days ago, the women’s national team came out flying with strong performances at either end of the pitch.

Offensively speaking, the team was firing on all cylinders. Heading into the match, Canada had not scored a goal from open play in 330 minutes, previously relying on penalty kicks and shootouts to win their games. It looked as though the same storyline would continue against New Zealand as Jessie Fleming scored the opener from the spot but eventually, the attack finally clicked and the goals came flooding in. The same positives can be said of the team’s defensive performance – a vital agent in this squad that rarely is discussed. Every member of the back line was in sync with one another limiting any threat from New Zealand. Canada’s statistics across 90 minutes included 57 per cent possession, five goals from 24 shots, 19 defensive tackles, 23 interceptions and 84 per cent passing accuracy.

“[The goals] speaks to us not standing still, that was the really critical point,” explained head coach Bev Priestman on the squad’s offensive output. “The players, you know, they want to enjoy this moment but my job is to keep them moving forward and we did a lot of work post-Olympics to look at how we do that more often … we want to put that line in the sand.”

“Credit to the players, we have not a lot of time on the grass since we’ve come back together but they’ve applied everything we’ve worked on and actually some of those goals [were] straight off the training pitch. So that’s this group, they stick to a game plan, they deliver when it matters, and I’m really proud of them.”

With Ashley Lawrence unavailable through injury, Priestman opted to start Janine Beckie in the full-back position and despite being an attacker, the Manchester City star slid into the role with ease. A player with pace and an eye for goal, it wasn’t surprising for Beckie to be a key aspect of Canada’s attack. In addition to Sinclair, she’s usually one of the first names listed on the team sheet up top. But what was impressive about Beckie’s performance in Ottawa was her ability to maintain that pace throughout the entire match across all areas of the pitch. It wasn’t uncommon to see the 27-year-old in the attacking third sending crosses into the box to then retreat back in defence and make a block or interception on New Zealand’s counterattack. Basically, the only thing she didn’t do was score.

Her performance in Ottawa proves that she is a utility tool the squad can call upon in the future to fill various roles when needed and Priestman applauded her game after full time. “She was a difference-maker, I believe she might have been involved in all five goals if I’m not wrong there, so I think like massive, massive impact,” she said. “I thought she was outstanding and she took that role on really positively when I said you know, ‘I want you to play full-back for this particular game.’ And that just shows what [Beckie] is, she’s a real team player and I thought she had a great game.”

Both teams focused on building for the future

After Saturday’s 5-1 win, Canada and New Zealand face off again on Tuesday in game two of the Celebration Tour. Despite being friendlies, both sides are taking the fixtures seriously as they prepare for the 2023 Women’s World Cup.

After the match, New Zealand’s head coach Jitka Klimková, who was managing her first game in charge of the national team, stressed her side will look to bounce back in Montreal as they kick off this new era in the program. “Today was a tough day, a tough game for us, we can see the Canadian team [was] playing with a lot of confidence. But look, we still have a game to go in this tour and we want to build on the good things that we’ve done,” she said. “I could see a lot of positives in this game and that’s what we are going to build on … We want to keep the ball, we want to possess, and I could see good moments in the game and that’s what we are going to build on in our attack. Defensively, we need to really fix our shape, we need to fix our individual defending as well and I believe the game on Tuesday is going to be even more competitive.”

Canadian captain Sinclair also reiterated the fact that her team isn’t taking this 5-1 win and calling it a day. Developing their game continues to be a focal point since winning gold. “Obviously, we’re trying to enjoy ourselves. We’re trying to enjoy the moment with our fans, but at the same time, we want to compete and win,” she said. “I just feel that our team, even the individuals playing back at their clubs, you can see people playing with a different level of confidence now [and] I think we showed that tonight … it was a great win, our focus right now is scoring more goals [so] it was nice to be able to do that.”

Additionally, Priestman went on to address the same topic touching on Canada’s World Cup ambitions. “For me, it feels like we’re taking a big step forward. I think that gold medal has given this group a whole host of confidence,” said the head coach. “I’ve seen some unbelievable performances from individuals and then the shared mindset to take that step forward towards the World Cup, that’s what this group are. I’m just really privileged and proud to coach this group because they’ll respond whenever you ask them and you set them a challenge. They did that for the work for the Olympics, now we’re on that journey to the World Cup.”

It was hard not to notice how much of an impact Janine Beckie had on Saturday’s result. The Manchester City star was all over the pitch, played the full 90 minutes and recorded two assists on paper but had a role in almost every goal.

The national team now heads to Montreal where they face New Zealand for a second time at Saputo Stadium on Tuesday, October 26 (7:30 pm ET/4:30 pm PT). Watch all matches live on OneSoccer. In addition to its website and app, OneSoccer is now available on TELUS channel 980 and on Fubo TV. Call your local cable provider to ask for OneSoccer today.