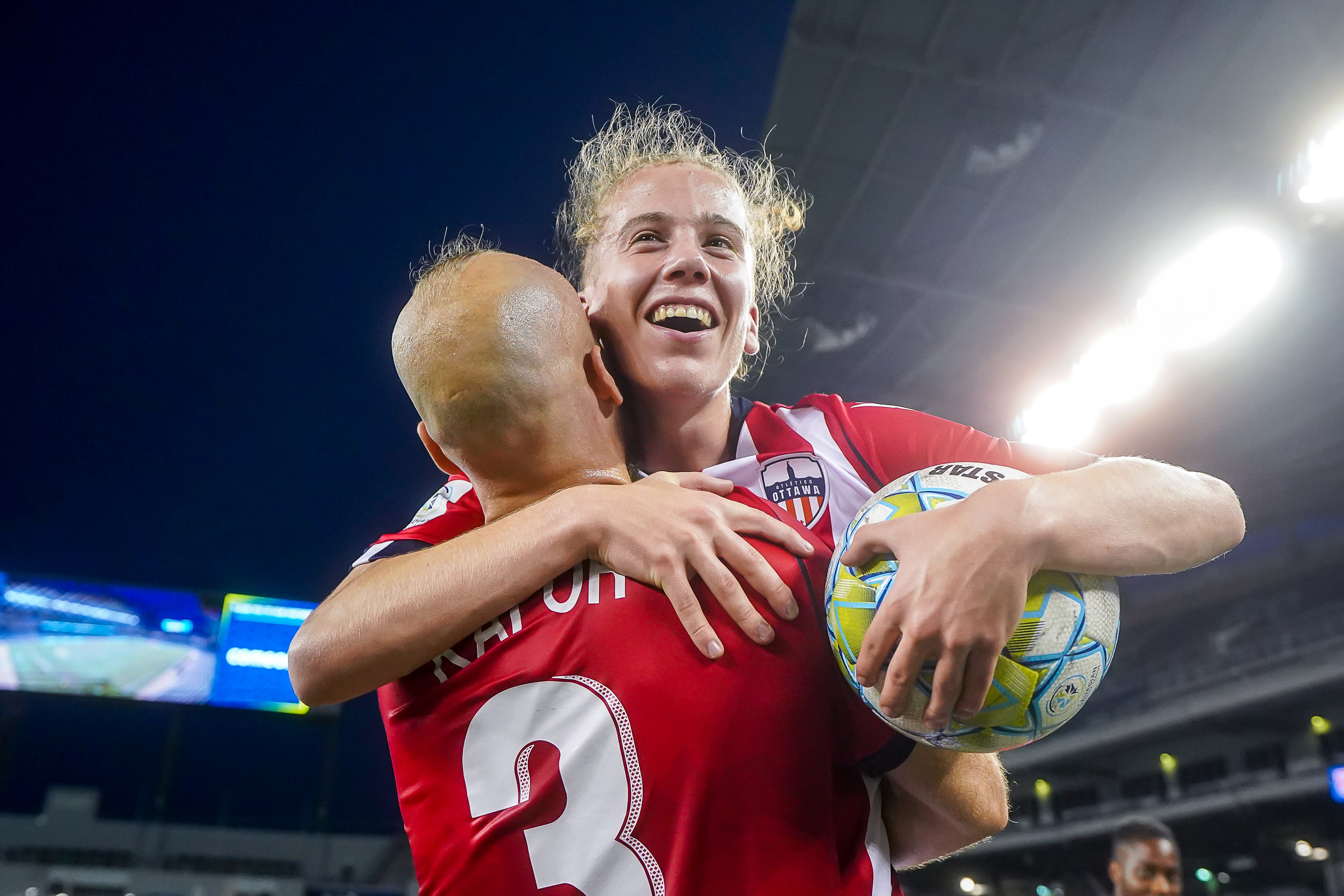 After 75 minutes of scoreless action between Cavalry FC and Atlético Ottawa, a pair of late goals from the latter earned a 2-0 win.

Malcolm Shaw eventually broke the deadlock in the 75th minute, sliding the ball past Marco Carducci from a few yards out, taking advantage of a brilliant run by Zach Verhoven, and giving his team a 1-0 lead.

Cavalry’s Anthony Novak had a stoppage-time equalizer disallowed after being caught offside, moments before Ottawa went the other way and sealed the three points with a breakaway goal finished off by Antoine Coupland.

With the win, Ottawa move off the bottom of the table, up into 5th place after five matches.

Ben McKendry has had a fantastic start to the 2021 season as a key figure in Ottawa’s midfield, and as part of the “M&M&M” trio that also features Chris Mannella and Viti Martinez.

McKendry has been one of the league’s best midfielder thus far at breaking up plays and intercepting balls in midfield, and he did that again on Sunday. He made tackles, made two clearances, and gained possession six times for Ottawa in another impressive display for the 28-year-old.

He also provided some offensive help as well, completing 77.5% of his team-leading 40 passes — also tying with Milovan Kapor for the team lead with 31 completed passes. 19 of those came in the Cavalry half of the pitch, including a dangerous cross from a free kick that Drew Beckie was able to head toward goal, although it didn’t challenge Marco Carducci in the end.

He has been crucial to how Ottawa have been trying to play in 2021, and if he’s on his game, the club will always have a chance to pick up the victory.

Richard Luca an attacking threat down the right wing

After not being able to join up with the Cavalry squad last year due to Covid-19 restrictions, Brazilian attacker Richard Luca showed on Sunday night why Cavalry wanted to bring him in.

The 23-year-old was deployed on the Cavs’ right wing and was an attacking threat for the 80 minutes he was on the pitch. He created a pair of chances, and came within inches of scoring the game’s opening goal in the first half, but his curling shot from the edge of the box struck the post.

He was regularly beating Ottawa left back Miguel Acosta with the ball at his feet, and also pitch in defensively with a ruthless high press. He made a team-high six tackles, gained possession three times, and picked up three interceptions in a strong performance.

He earned praise from his head coach Tommy Wheeldon Jr., who was also quick to point that before The Kickoff began, Luca hadn’t played a game in 18 months.

“He was exciting,” said the Cavs boss after the match. “He had a couple of really nice moments, and what about his shot. An inch away and it’s another one of those crackers that this league has seen a lot of. It’s a game of inches.”

Teenagers stand out for Atlético Ottawa

Teenage duo Keesean Ferdinand and Antoine Coupland, both 17, came off the bench for Atlético Ottawa in the second half, and had big impacts.

Ferdinand has impressed with his physicality and ability to make a tackle in the handful of appearances he’s made so far on loan from CF Montreal, and that was on display again on Sunday night. He was tasked with marking the lively, difficult challenge that is José Escalante, but hardly put a foot wrong.

In just over 30 minutes at right back, Ferdinand completed seven of ten attempted passes, made three clearances, and won his one duel. It was another solid body of work for the youngster, who looks like a very promising player.

Another promising youngster, Antoine Coupland, came off the bench in the 83rd minute, and caused a lot of problems for the Cavalry backline. Within moments of coming on, he had a chance to score, but couldn’t beat Marco Carducci, who stood tall to block the effort from close range. On what would turn out to be one of the last kicks of the match, however, Coupland found his goal.

Sprinting down the pitch with, Coupland received a pass from Viti Martinez and put the ball in the back of the net uncontested. It was a 2-on-0 breakaway down the field, so he just had to make an easy finish, but a first career goal clearly meant the world to him. He was emotional as he ran toward his teammates in celebration, teammates who couldn’t be happier for him.

“I’m so happy that Antoine scored a goal,” said his head coach Mista after the match. “This is not only great news for Atlético Ottawa, it’s great for Canadian soccer.

“Antoine is like my child, like my baby, because he’s the baby of the team. He needed some great news because he struggled a bit with his injury, and I’m very happy for him.”

One of the people Coupland ran over to after scoring was Malcolm Shaw.

“Super happy for him, Antoine’s our youngest player on the squad,” said Shaw. “He’s talented, he works so hard, and this is a massive victory for him. The whole team rallies around him, but we also think there’s more to come.

“We have him at the club for a reason, so we’re definitely happy for him to get his first professional goal.”

The 25-year-old Canadian striker took his goal well, earning his side all three points.