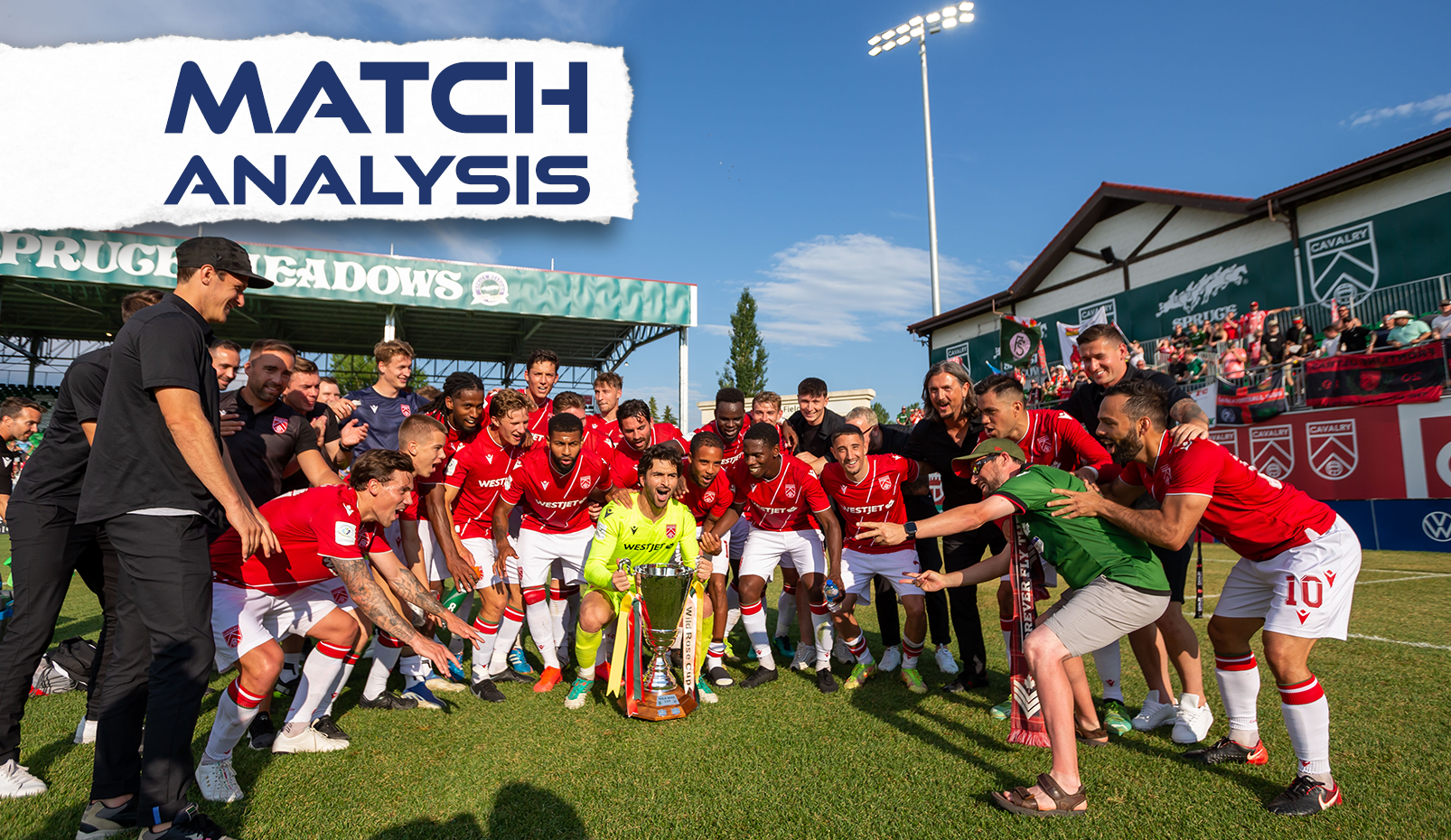 Cavalry FC ended a three-match losing streak with a 2-0 Al Classico victory over FC Edmonton. The win was their 11th all-time against their provincial rivals.

Joe Mason opened the scoring for a second straight match for Cavalry, before defender Karifa Yao scored off of a brilliant Ben Fisk corner kick delivery just before half-time. With the clean sheet, Marco Carducci is now tied for second in the league in that category.

Speaking of second place, that is now where Cavalry finds themselves in the CPL table after this victory.

Cavalry has spent the last few weeks making the wrong kind of club history. Their 3-0 loss to Pacific was a club record for worst defeat, while they came into this match having lost three straight for the first time.

With that in mind, this match felt like the perfect tonic for the Cavs recent woes. The Calgary side kept a clean sheet and scored multiple goals for just the second time respectively in the last six matches. They did so in front of an excellent atmosphere at Spruce Meadows.

At the full-time whistle, they also lifted a trophy. The win clinched the 2022 Wildrose Cup, awarded to the winner of the season series between Cavalry and Edmonton. Cavalry has now defeated the Eddies three times this season, with the fourth and final meeting coming on September 17.

The Wildrose Cup is a trophy created in partnership by supporters of FC Edmonton and Cavalry FC. With that in mind, that was who the hosts had in mind as they fought to lift the cup today.

“[Before the match] we heard the fans, and I just opened the door and I said ‘listen to them, that is who you are playing for’,” said Cavalry FC head coach Tommy Wheeldon Jr. “It is their trophy, they have put it on, they want the bragging rights, so let’s go and put on a show for them, and I think we did.”

After winning their first five home matches of the season, Cavalry had dropped their last two outings at home, including allowing York United to pick up their only away victory of the season.

“We hadn’t been good the last couple of home games, or didn’t get the results that we felt we deserved, and our fans cheered us through,” said Wheeldon Jr. “That performance and that result [today] was largely down to their energy.”

They are now tied with Pacific FC for most points picked up at home this season in the CPL, with 18.

Another dominant performance at the back from Cavalry’s Karifa Yao

He certainly wasn’t the first defender this season to be outwitted by Woobens Pacius, but Karifa Yao was incredibly unhappy with the mistake he made in the buildup to Forge’s opening goal on Wednesday.

He went into this game vowing to show “the real Karifa”, and he did just that demonstrating why he has not only been a key part of this Cavalry side this season, but one of the league’s most dominant and consistent defenders. At just 21, playing a centreback position where players usually develop a little bit later, the CF Montreal loanee put together a man-of-the-match performance against Edmonton.

“Honestly I thought Karifa Yao was spectacular, I don’t know who got man of the match, but with a goal and a clean sheet he certainly put his hat in the ring,” said Wheeldon Jr. “What was pleasing for him, he wasn’t happy with the error that led to Forge’s first goal [on Wednesday], and that is a young man with a high football IQ and a massive heart. Because he went out there and said ‘that’s it, I’m not going to let another mistake ruin us’. That is the kind of mentality that you need to play at the top level, and I think he is going to play at a very high level.”

Yao scored his first CPL regular season goal during the match, his only other professional goal coming in the CPL semi-finals last year against Pacific.

But ever the defender, there was another metric that Yao had on his mind as a better indication of his success today.

Yao won four of five aerial duels, had six clearances and made three blocks over the course of 90 minutes. This came against an FC Edmonton side who were incredibly direct in transition and looked to turn every missed pass in the midfield from Cavalry into a scoring opportunity. As Cavalry’s fullbacks were directed to push further up the pitch, Yao knew even more defensive responsibility was going to lie on his shoulders.

“We knew that they are good in transition, so we knew if defence that we had to be ready, the midfielders and centrebacks to defend well against them,” said Yao post-match.

Here is a look at Yao’s defensive actions from the game, many of which were vital interventions inside of his own 18-yard box.

“Match of moments” as FC Edmonton delivers another solid performance against Cavalry, but results remain elusive

Over the course of their three meetings in CPL this season, FC Edmonton has been outscored by Cavalry by a combined 8-1. But that hardly tells the full tale of the recent meetings between these two sides. Last time they played, Edmonton outshot Cavalry at Spruce Meadows and came very close to doing so again today.

Especially during the first half, they had significant moments of pressure against one of the better sides in the league. But ultimately, experience won out and Cavalry was able to make good on their chances, while Edmonton failed to capitalize.

“The game really came down to two moments, a set piece that, we didn’t manage well, we are going to make mistakes, that is part of the game, and allowing their fullback to push through the heart of our group,” said FC Edmonton coach Alan Koch. “Other than those two moments, our young inexperienced group went toe-to-toe with a fantastic team in this league.”

While it can’t be said that Cavalry didn’t deserve to win, after all, they created the better chances and had 1.21 expected goals to 0.48, it was a lot closer than the 2-0 scoreline indicated. The two sides were nearly equal in terms of final third entries (54-53 Cavalry) and had the same number of touches inside the opposition box (13).

“We looked to go in behind, we knew they played the other day so their legs weren’t as fresh,” said FC Edmonton midfielder Marcus Simmons. “We want to get that to our advantage, the difference is they finished their two chances and we didn’t finish chances. If we do, we up and the game is a whole different story hopefully.”

Edmonton did have some joy getting in behind Cavalry, especially out wide as the host’s fullbacks were directed to push higher up the pitch. Once they go into those good areas, however, Edmonton was largely wasteful as the chart of crosses below demonstrates. They also forced six corners during the match, but against the league’s best set piece outfit, failed to capitalize.

Yao is a key reason why Cavalry has one of the league’s best defensive records, and made several vital interventions today to preserve the clean sheet.