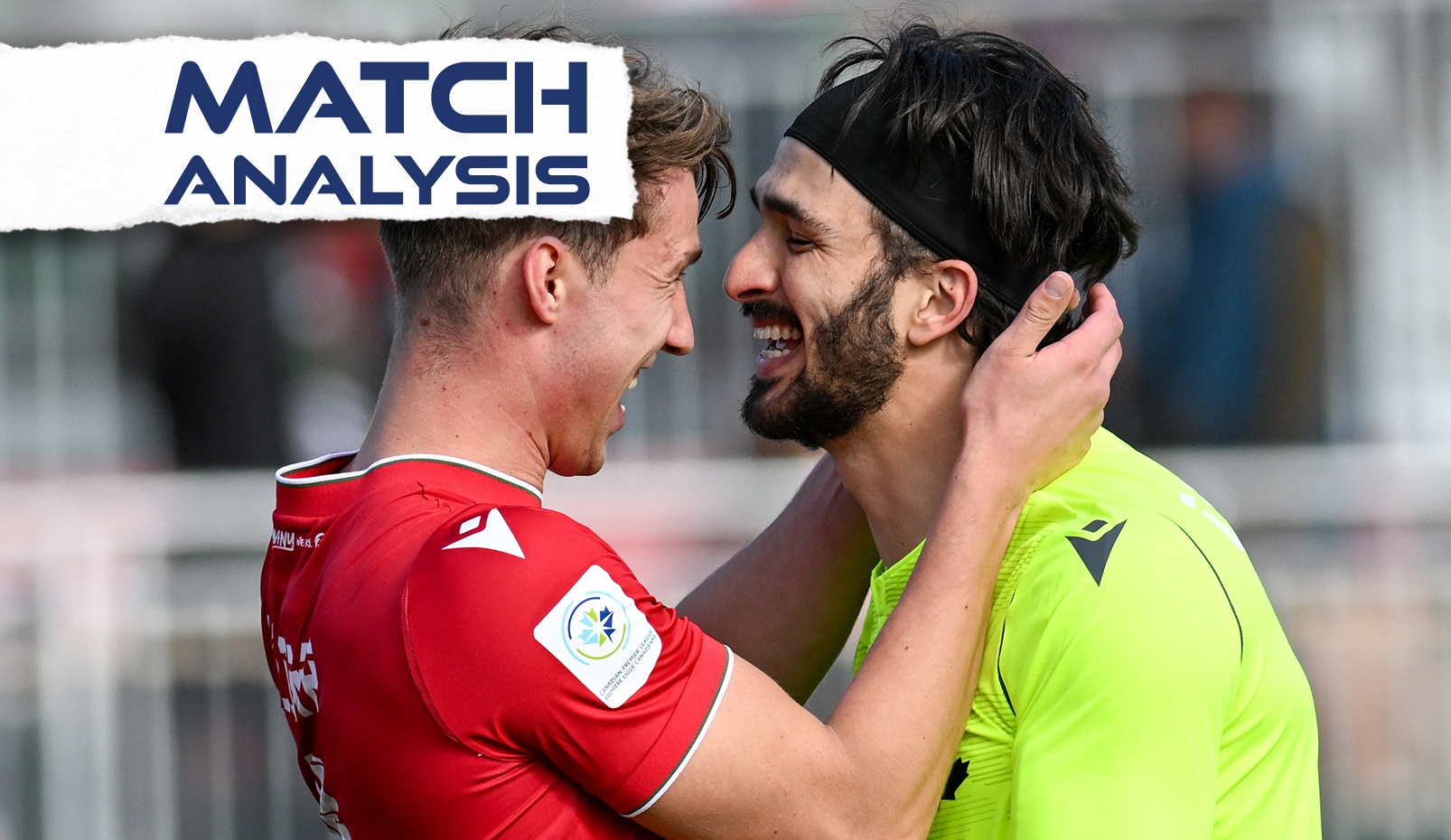 After a difficult start to the season, home-field proved to be the perfect remedy for Cavalry FC’s woes. They picked up their first win of 2022, 2-0 over league-leaders Pacific FC thanks to a goal from Ali Musse in just the second minute and a brilliant finish from Joe Mason. In his first start of the year, Marco Carducci made a heroic return to pick up a clean sheet. Pacific, meanwhile, suffered their first loss of the season and leave Alberta without a goal and just a single point after drawing FC Edmonton on Wednesday.

After being diagnosed with testicular cancer back in February, the sheer fact that Marco Carducci was on the pitch for Cavalry in their home opener was a win in itself. But the 25-year-old goalkeeper wasn’t content with just participating in his first match of the season.

Against arguably the best attacking team in the league, Carducci made four saves including a brilliant stop on Marco Bustos late in the second half to preserve Cavalry’s first clean sheet of the season. “That save at the end is just why we are fortunate to have him as our goalkeeper,” said Cavalry coach Tommy Wheeldon Jr.

After the match, Wheeldon Jr. was visibly emotional any time he was asked about Carducci, who he called “like another son to me”, often needing a few moments to collect his thoughts.

“It was a great win for Marco, and everyone,” Wheeldon Jr. said. “For what he’s been through, people don’t realize, like we see it day to day. That guy is unbelievable. The lads fought for him and his big save at the end to keep the shutout. That’s all I wanted today was a shutout for him.”

Carducci said he was emotional the entire day, from the warm-up until the final minutes. As the clock ticked down on a big win for the club, he took a moment to savour what it meant to be out on the field with his teammates again after a trying start to the year.

“I went into the game with the mindset that I love doing this, this is an opportunity that every kid who plays soccer wants to have,” said Carducci. “Obviously after the last couple of months, some roadblocks in the way, to be able to come back and do it felt amazing.”

When the final whistle sounded, Carducci was embraced by his teammates in a beautiful moment that will certainly live long in the memory of the ATCO Field faithful.

Any doubt that today’s match has been circled on Cavalry’s calendar since the schedule was released was quickly put to rest in the opening minutes.

The Cavs came flying out of the gate, grabbing the lead just 75 seconds into the match. In a poetic fashion, the goal sequence started with Jose Escalante keeping a ball from crossing the end line, perhaps casting back memory to the controversial fashion in which Pacific ended Cavalry’s season last year.

“There’s an advantage, it was our home opener,” said Wheeldon Jr. “We faced Ottawa in theirs, Forge in theirs, and we knew the advantage would be for us. We’ve watched Pacific and they struggled with a few ideas against Edmonton and we knew that we could frustrate them, especially if we scored early.”

For a club that scored a league-low 15 goals at home last season, and had only scored twice in three matches to start this campaign, it was a dream start.

WHAT A START FROM THE CAVS!

Cavalry made it a point to put Pacific under pressure in their own half at strategic moments and it paid off once again in the 37th minute when Jean Aniel-Assi dispossessed Nathan Mavila. In total, Cavalry won possession eight times in the final third.

Wheeldon Jr. mentioned before the match how important these first few home matches were, seeing as they only have five through the first fourteen games of the season. So to get the first home win out of the way immediately will be a big confidence boost for his group.

In every facet, it was the perfect way to open ATCO Field for the season.

It came from the first of a string of costly, and uncharacteristic, defensive errors. Matthew Baldisimo was unable to shield the ball past the end line allowing Escalante to poke it free to Mason. In the chaos that followed, Pacific left Musse open alone in the box, and the Cavalry attacker was quick to capitalize. It was the first time Pacific have trailed all season.

Pacific coach James Merriman won’t be much happier with the way his team conceded the second goal of the match just before half-time.

Fullback Nathan Mavila’s heavy touch in his own defensive third allowed Jean-Aniel Assi to dispossess him, and poke the ball free to Joe Mason. The rest of the Pacific backline couldn’t react in time and Mason smashed a stunner past Callum Irving.

A SCREAMER FROM MASON! The CPL is only supplying great goals this season…

In a match where both teams put up an equal expected goal total of 0.71 and chances were not plentiful, it was those mistakes that proved to be the difference.

“You’ve got come out focused right from the very beginning and it was just two mistakes that shouldn’t have happened,” Pacific captain Marco Bustos said of the two goals his team conceded, later adding “There’s nothing much we can really say right now, we’ve just got to refrain from making those mistakes again”.

Several Cavalry players could be deserving of this honour including Mason, Assi and Escalante, but there is no question who everyone in red was playing for tonight. With four saves and three clearances, he was every bit the commanding presence that Cavalry fans have come to love through the years between the sticks.

Pacific has a top-of-the-table clash in their sights as they visit TD Place to take on second-place Atlético Ottawa on Saturday, May 7 (3:00 p.m. PT/6:00 p.m. ET). Cavalry is back on the road on Friday, May 6 (8 p.m. MT), but won’t have to travel far as they head to Clark Stadium in Edmonton for the first Al Clasico of 2022.