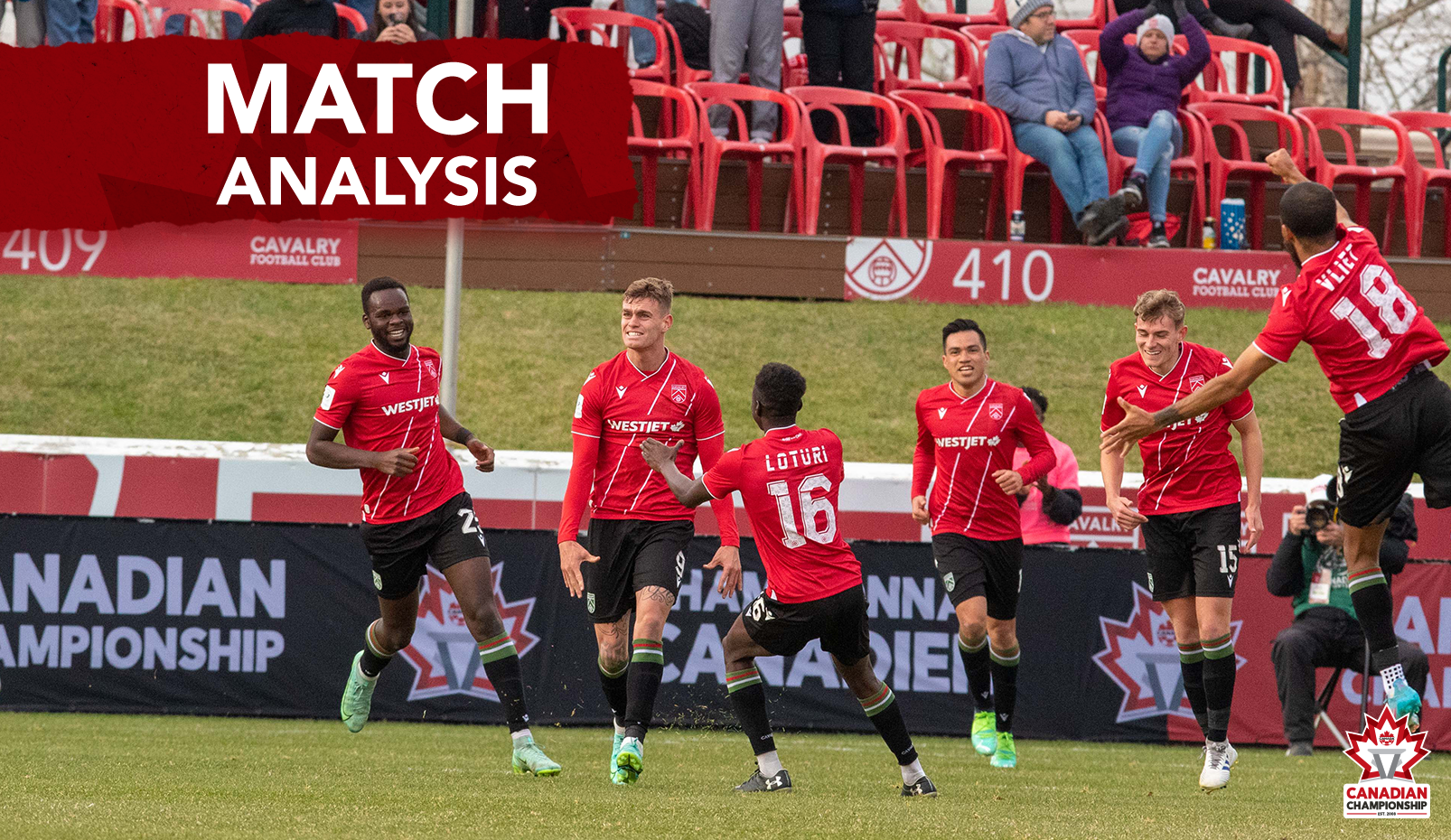 Two goals from Myer Bevan sent Cavalry through to the quarterfinals of the Canadian Championship on Tuesday night and earned his team a 2-1 victory over their provincial rivals FC Edmonton.

A header in the 17th minute from a set piece gave the home side a 1-0 advantage, before Bevan made it two with a penalty about 20 minutes later. Edmonton’s lone goal would come from the penalty spot as well, as Tobias Warschewski took advantage of his second half opportunity to get the Eddies back into the game. A second goal would never come for the visitors, despite their best efforts.

Cavalry will take on either the Vancouver Whitecaps or Valour FC in the quarterfinals, with their preliminary round clash set for Wednesday night.

Myer Bevan sends Cavalry into the next round of the competition

Making his second start of the season, and first as the main target man, of the season in this match was Myer Bevan. He’s looked sharp through his first few appearances in the Canadian Premier League, and took full advantage of his first extended opportunity up top.

He scored both of Cavalry’s goals in this match during a stellar first half performance, beginning with a thumping header in the 17th minute. Bevan played a fantastic ball across the penalty area that led to a shot for Jose Escalante that was turned away by Eddies goalkeeper Andreas Vaikla. On the corner kick that followed, Bevan rose above everyone to head the ball across the face of goal and into the back of the net for the opening goal.

Myer Bevan scores a thundering header off a corner to open the scoring as @CPLCavalryFC takes a 1-0 lead over @FCEdmontonNow in this #CanChamp version of #AlClassico 🍁🏆#CanPL | 🔴 https://t.co/7JFAUhgjL6 pic.twitter.com/wubPu8SYq0

He would add a well-struck penalty later in the half to double Cavalry’s advantage, and which would end up being the game winner. He was quieter in the second half as FC Edmonton marked him tighter as part of their strong effort to get themselves back into the match, but the damage had already been done.

Bevan was Cavalry’s best or joint-best player in all of the important attacking statistics, including shots (4), shots on target (4), touches in the opponent’s box (7) and chances created (2).

Cavalry head coach Tommy Wheeldon Jr. was also happy with the performance from his striker, and suggested that there may even be more to come from him.

“He’s good, isn’t he?” Wheeldon Jr. said after the match. “He’s a player that we have high hopes for. His movement is great, his finishing is quality, I think he felt he could’ve had a hat trick — he was disappointed in the last game to not get one in the half of football. The goals will come because he’s in the positions and when he’s having the chances it’s the law of average, and fortunately today [he had] the clinical header and a nice finish from the penalty spot.

Next up, Cavalry will host either the Vancouver Whitecaps — who they famously knocked out of this competition in 2019 — or fellow CPL side Valour FC, who play each other in Vancouver on Wednesday night.  Wheeldon Jr stressed after the match how much Cavalry’s previous success in this tournament means to them, and how much they want to do it again in 2022.

“We were there when it was the expanded format in 2019 with home and away legs, we enjoyed that run, and we had a tightly contested battle and we were knocked out against Pacific last year,” he recalled. “We didn’t get to play in 2020, so to have the opportunity to play at home against the provincial rivals, beat them again and move forward, it’s a sweet victory.”

Eddies much better in second half, respond well after going into the break down 2-0

After going into halftime down 2-0 for the second time in a week against Cavalry, FC Edmonton had a much different response this time around. On Friday a pair of quick goals sunk their spirits and to some extent they looked defeated already. This time around they started the second period of play with a lot of energy, and spent a lot of the half on the front foot.

Of their five shots on Tuesday, four of them were in the second half, including the penalty attempt from Tobias Warschewski that found the back of the net. After the break they also outplayed Cavalry in terms of touches in the opposition box (ten to Cavalry’s four) and final third entries (36 to 35).

They won more of their duels in the second half than in the first, and limited Cavalry to a single shot as well. After the break they looked like a completely different team — the one that showed against Pacific FC a few weeks ago that they can fend off anyone in the CPL if they limit the number of mistakes they make and work together as a defensive unit.

It was one of their best halves of the season, and the real challenge now is playing like that for the full 90 minutes and earning that needed first win of the season.

“I think Friday and tonight were pretty similar, to be brutally honest,” said Edmonton head coach Alan Koch after the match. “It was 2-0 at halftime of both games. The difference is inexperience, immaturity, the structures that we’re dealing with. You can tell Cavalry are better than us, and they should be better than us — they have experienced players, they have leaders on their team.

“We’re a young, inexperienced group and it shows, and that’s disappointing though because as much as we are inexperienced and we are immature at times, I think on Friday and tonight we showed the potential that we have. You can see moments where our young players are coming together, but to come play against a team like Cavalry you can’t just play in fits and spurts, you have to play for ninety-plus minutes, and the better team won again tonight.”

Set pieces lead to all three goals, several other chances

All three goals in this match came from set pieces — Myer Bevan’s header on another great corner from Ali Musse, Bevan adding a second from the penalty spot, and Tobias Warschewski’s second half tally from 12 yards out as well.

Both of these sides feature players who are threats in the air — Warschewski, Mamadi Camara and Luke Singh for FC Edmonton, and Myer Bevan, Daan Klomp and Karifa Yao for Cavalry to name a handful of players who had opportunities in this match. Games can be won or lost on who comes away from these duels unscathed, and unfortunately for Edmonton on Tuesday it was them who paid the price.

There were several other chances as well that nearly produced goals but were just missing by the smallest of margins. There were several crosses from Cavalry that were failing to get over the Edmonton defenders at the near post, but would have met several attackers if they were inches higher. Edmonton also had a chance in the first half where a free kick from Warschewski met Mamadi Camara behind the Cavalry backline and forced a huge stop from Marco Carducci, but the assistant referee’s flag went up for the slightest of offsides.

Interestingly, Warschewski was the one often being tasked with taking the set pieces and not trying to get on the end of them, however. Warschewski has proven throughout his time in the CPL that he can score goals and create chances in the air — look no further than his magnificent bicycle kick in the first game of the season — but he’s also their best player when it comes to delivering these balls into dangerous areas.

This changed at the end of the match when the Eddies were throwing everyone forward — including goalkeeper Andreas Vaikla — and they needed Warschewski in the box.

“Set pieces are really important in every game,” said Eddies forward Wesley Timoteo after the match. “Set pieces can win games, just like today — three goals, three set pieces. Defensively we’ve got to be stronger on set pieces, and just like last Friday, today we suffered goals on set pieces, and offensively we’ve just got to put it in. We got one in the first half, great save from the other keeper, but we’ve got to take every chance we get to put the ball in the back of the net.”

The New Zealand international scored twice in the opening half of the game, helping his team advance to the quarterfinals.

As a result of winning this game, Cavalry FC move onto the quarterfinals and will host the winner of the Vancouver Whitecaps vs Valour FC game on Wednesday evening. That quarterfinal game at ATCO Field will take place in two weeks.