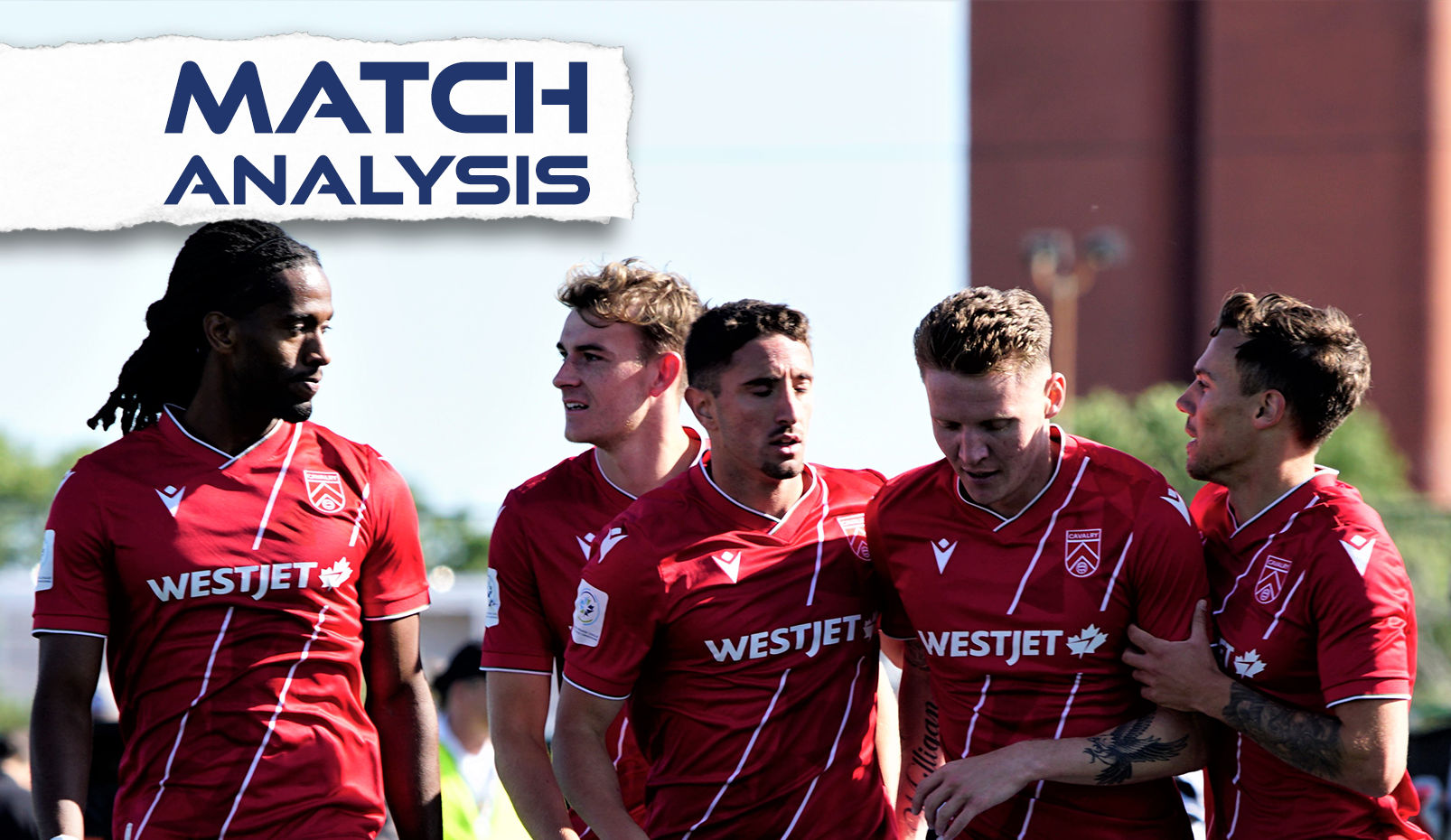 Cavalry FC went to the home of their rivals FC Edmonton on Saturday and came away with three massive points, beating their AL Classico opponents 1-0.

The Eddies were the better side in the first half, but were unable to find the back of the net, something they would regret shortly after the break. Meeting a cross from Roberto Alarcon in the air, Cavalry striker Joe Mason sent the contingent of travelling fans home happy with a headed goal that would end up being the match-winner.

With the victory, Cavalry now sit in first place in the Canadian Premier League table, although Atlético Ottawa can regain top spot on Sunday when they take on Valour FC in the nation’s capital.

The Calgary and Edmonton sports rivalry has been one of the best in the country for many years. The Flames versus Oilers in the NHL and the Stampeders versus the Elks in the CFL are two examples of provincial battles that have gone on for generations in Alberta’s two largest cities, and Cavalry FC versus FC Edmonton is one of the latest additions to the sports scene in the province.

Fans of both sides care deeply about this matchup, as demonstrated by their willingness to make the three-hour journey to watch their teams play, as a vocal section of Cavalry fans did for Saturday’s match.

This derby, while local and intense, has been one-sided thus far, however, as FC Edmonton are still yet to beat Cavalry through four full CPL seasons. Saturday’s game was the 17th meeting between the two, and Cavalry’s 14th win. They drew the other three matches, all at Calgary’s Spruce Meadows, by scores of 0-0, 2-2 and 1-1 across the 2019 and 2022 seasons.

As The Eddies have progressed this season, so too have their results against Cavalry. The first meeting of the year was a 3-0 defeat at this very same venue, before a 2-1 defeat in the Canadian Championship and followed by a pair of two-goal losses in CPL action. Losing to your rival is always a frustrating result, but especially so when a first win has yet to come through four CPL seasons.

Edmonton head coach Alan Koch spoke before the match about needing to represent their city well, and one thing is absolutely certain when these teams meet — that both teams put their all into this fixture, and their levels are raised in pursuit of one-upping each other.

“You can see the fans here today, it means a lot to them,” the goalscorer Joe Mason said after the match. “This is our biggest rival in this league, these are the games you want to play in.”

His FC Edmonton counterpart Tobias Warschewski, who was left frustrated in this match after several chances didn’t come to fruition, added that his side never wants to be outworked when they play Cavalry, or anyone else for that matter.

“I think all year we have progressed, everybody,” said the German attacker after the game. “You see the guys on the pitch looking much more sharp.

“I think we worked much harder today than them, and the only problem was that we didn’t get on the end of [any chances] and score goals. We had a lot of opportunities.”

Eddies on top for the first 45, but unable to take advantage

As Warschewski mentioned, FC Edmonton had some good chances in this match. While the first half wasn’t quite one-way traffic, it sure felt like it toward the end of the first 45, and The Eddies had several opportunities to find the back of the net.

Cavalry, playing in front of a contingent of noisy travelling supporters, were on the front foot for the first 10-15 minutes, the momentum then shifted in favour of the hometown team.

CJ Smith, who scored his first CPL goal last time out against York United, was very involved in the first half, part of an attacking trio with Warschewski and Azriel Gonzalez that was causing all kinds of trouble for the Cavalry defenders. Smith was on the right hand side, Warschewski was up top and Gonzalez was on his favoured left flank, and their pace and intensity was hard to match.

On multiple occasions in the first half, the preferred strategy seemed to be crosses into the box. Smith and Warschewski both played low balls into the area toward Gonzalez, but they were missing by the smallest of margins. Gonzalez couldn’t catch up to Smith’s effort, and on the follow up a few minutes later from Warschewski, Gonzalez was only able to find the side netting of the goal.

Smith himself also had a opportunity for a shot at goal from a few yards out in the early stages of the game, but his effort went wide of the target.

As a team they outshot Cavalry 5-4 in the opening half, but failed to hit the target with any of them, and their inability to find the back of the net in a phase of the match that they dominated would cost them.

They were also sharp defensively in the first half — of those four Cavalry shots none of them came from particularly promising positions, as one from Roberto Alarcon missed the target, Darlington Murasiranwa made two fairly comfortable saves, and Ali Musse’s shot from a tight angle would hit the top of the crossbar and bounce away from danger.

It wasn’t sustainable in the second half for the Eddies, and Cavalry looked much sharper and would ultimately win this match. As Koch has said throughout the season, his side’s lack of maturity and professional experience has let them down on many occasions, and was again one of the contributing factors in why they didn’t get a point or perhaps three from this match.

Despite this, Koch was happy with how his team played as a whole — there were a couple of lapses in quality, a disallowed goal and an alleged handball call that Koch believed should have been a penalty, but on the whole believed they probably did enough to pick up a result. “I’m happy with our entire group,” he said,” every player in our group played well.”

A good finisher, with an impressive ability to be in the right place at the right time thanks to his movement off the ball, when Mason is on his game there may not be a better striker in the league. He also has a knack for stepping up in the AL Classico, something that has won over the fans at Spruce Meadows over the past couple of years.

He found the back of the net again on Saturday, beating Eddies goalkeeper Darlington Murasiranwa with a header just after halftime, which would end up being the winning goal.

The tally is the most he’s ever scored against a single opponent in his career, as his sixth against Edmonton beats the five he’s scored against Blackburn Rovers. Third on that list, among other teams, is Pacific FC with four goals, something Mason will be keen to add to when they meet in the final match of the regular season, and potentially in the playoffs.

With those playoffs in mind, Saturday’s goal came at a good time for the Plymouth, England-born striker. He hadn’t scored in just over a month — since a 2-1 victory over Forge FC on August 13. He only went four matches without scoring, which isn’t unreasonable at all, but for a striker of his calibre, and with his own personal goals and expectations, it was getting to him a little bit, he admitted.

“For any striker it’s important to score, especially at this time, in the business part of the season,” Mason said after the match. “It was very important to me, I put a lot of pressure on myself to score. That’s what the team needs from me, I’m happy to get up and running and looking now to carry on.”

His head coach Tommy Wheeldon Jr was also happy to see his star attacker back on the scoresheet, and said that Mason has been asking him to keep the faith in him, knowing that another goal would come sooner rather than later.

“He said ‘keep playing me, I’ve got to play through it’,” the Cavalry boss said after the match. “I spoke to him and asked ‘what’s the longest time you’ve been without a goal?’ and he said 17 games. I asked who that was for and he said Wolves,” he added, smiling as he recalled Mason’s pedigree in this sport, as Mason’s stint at Wolves was primarily in the English Championship.

“I said ‘so this ain’t pressure, this is five games’, so he knew he’d always get it and he sat down with (technical director and coach) Leon [Hapgood] this morning about areas of opportunity. Fortunately he got it and as soon as he scored we breathed a bit.”

The Cavalry FC striker found the back of the net early in the second half to give his team a 1-0 victory on the road.

FC Edmonton stay at home and will host Forge FC at Clarke Stadium next Sunday, September 25 (2 p.m. MT/4 p.m. ET). Cavalry, meanwhile, head back across the province to Calgary, where they will host Atlético Ottawa at Spruce Meadows on Saturday (3:30 pm MT/ 5:30 pm ET).