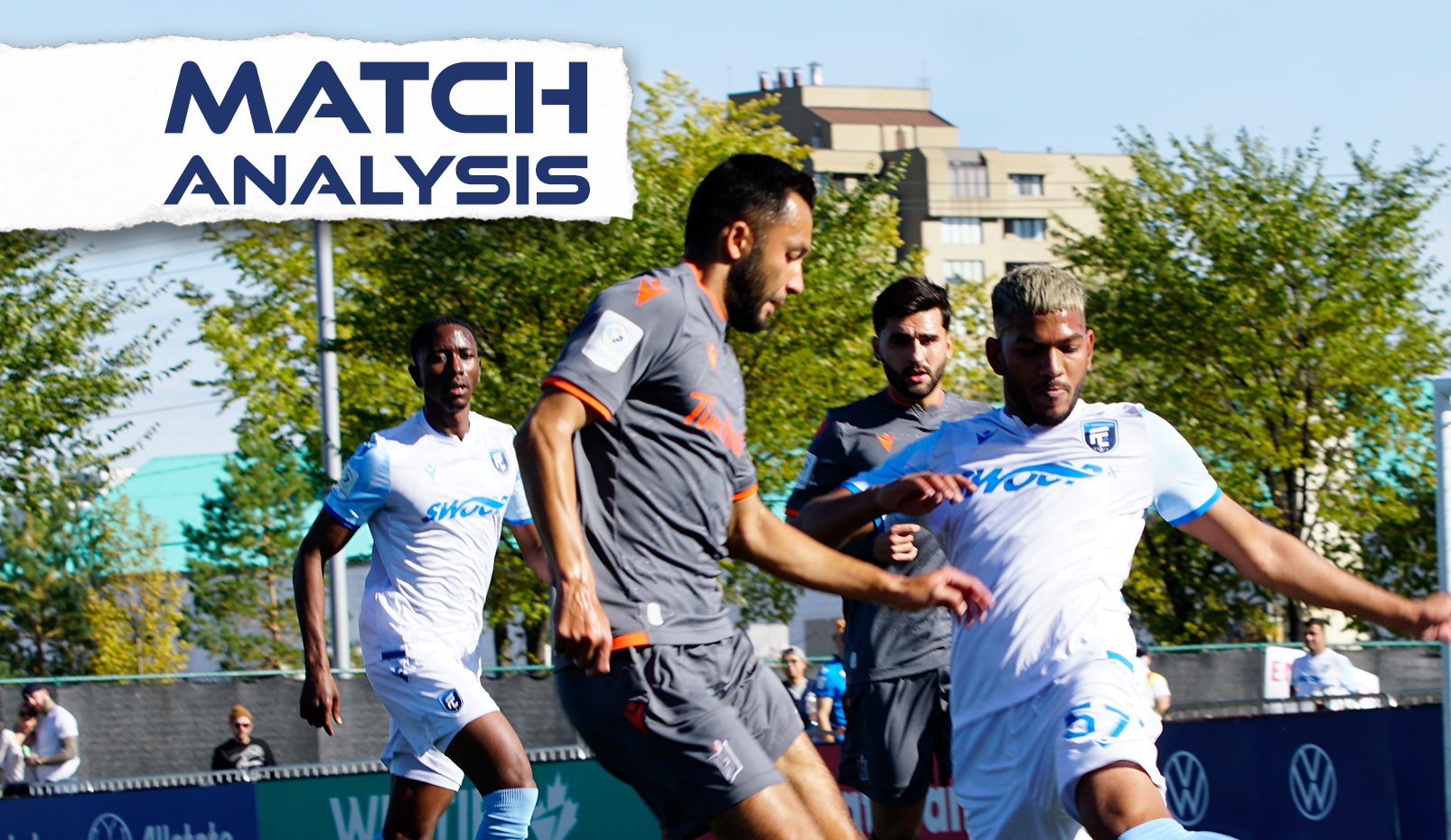 Sunday’s match at Clarke Stadium was a chance for Forge FC to clinch a playoff spot with a victory, but the hometown FC Edmonton put up a strong performance to earn a point at home and spoil what could have been a jubilant day for their opponents. Instead, the frustrated Hammers completed the away portion of their regular season schedule losing two points instead of gaining one.

Both goals were scored within a few minutes of each other midway through the second half. The opening goal came from an attempted cross from Terran Campbell that took a huge deflection off of Cale Loughrey and floated over the head of Darlington Murasiranwa, who stumbled when trying to scramble across the goal to get to it.

Seven minutes later CJ Smith found the back of the net for The Eddies, beating Triston Henry at his near post with a low shot that slipped through the hands of the Forge goalkeeper, who dived but couldn’t get a strong enough block to it. As a result, the match would end 1-1, a fair result given how the match played out.

The mission was simple for Forge FC on Sunday: win and you’re in.

After getting some help from their 905 Derby rivals York United on Friday night — The Nine Stripes beat Valour FC 3-1 at York Lions Stadium — all The Hammers needed to do to clinch their spot in the playoffs was beat FC Edmonton. For a team that had won all three prior meetings with The Eddies this season, by a combined score of 12-4 no less, they were undoubtedly the favourites for this contest.

If there’s anything we’ve learned about FC Edmonton, however, it’s that they absolutely will not go down without a fight, and that was the case again on Sunday. Playing in front of their home crowd at Clarke Stadium, where they have had a healthy portion of their success this year, The Eddies held Forge to a 1-1 draw, and prevented Forge from clinching a playoff spot on the road as Atlético Ottawa did on Saturday in Calgary.

After Terran Campbell’s effort, admittedly an attempted cross according to the Forge FC star, took a big deflection off of Forge loanee Cale Loughrey, the ball popped up into the air and over the head of Darlington Murasiranwa for the game’s first tally. Campbell added after the match that “sometimes you need a bit of luck”, and luck had given them a 1-0 lead with 30 minutes to go.

A deflection on a shot from Terran Campbell of @ForgeFCHamilton drops over Darlington Murasiranwa and the visitors take a 1-0 lead in Edmonton#CanPL | ?: @onesoccer

They weren’t able to hold onto that lead for very long, however, as just seven minutes later CJ Smith had fired the ball past Triston Henry with a low shot that the Forge goalkeeper will have wished he did better with at his near post — getting a touch to it, but not a strong enough one to turn the ball away.

The match would end 1-1 as a result, and while Forge is disappointed with the result, they did move up a spot in the CPL table — now in second, four points back of Atlético Ottawa, with a game in hand.

It is all tied up in Edmonton!

Head coach Bobby Smyrniotis made his viewpoint on the result crystal clear in the postgame press conference, saying that it was “one hundred percent two points lost” at this crucial point of the season.

“In the second half I thought we needed to be better. We lacked a little bit of urgency in our play, we get a goal that comes from nothing — sometimes that happens in a game when you’ve missed some other clear cut opportunities — and then we just need to be better after that. Bottom line, we need to be better.”

Murasiranwa the hero as Eddies pick up a deserved point, but performance wasn’t perfect

Young Edmontonian goalkeeper Darlington Murasiranwa has been giving his opportunity to get a run of games lately for Alan Koch, likely with a possible eye to next season, and for the most part he’s taken that opportunity.

While Alan Koch said after the match that nobody on the team has any certainty about what the future holds for them, it seems as though Murasiranwa is being given the opportunity over on-loan (from Toronto FC II) shot-stopper Andreas Vaikla, who was a standout for much for the season and likely a candidate for Goalkeeper of the Year before his recent spell serving primarily as the backup. There are similarities to the situation in Winnipeg with under-contract goalkeeper Rayane Yesli taking over from Jonathan Sirois, who’s on loan from CF Montreal.

Murasiranwa was good again in this match, making several huge saves. In the first few minutes of the match he made a nice stop to deny Terran Campbell, later charged out of his goal to close down Woobens Pacius, and blocked his shot from a breakaway as well. The best of the bunch was a brilliant diving stop to his left side, also in the first half, to deny a Tristan Borges free kick.

Darlington Murasiranwa of @FCEdmontonNow came out of his net, made himself big, and earned himself the @AllstateCanada Save of the Match ?#CanPL | ?: @onesoccer pic.twitter.com/ghkIX5phOO

While solid, the performance from the Eddies goalkeeper wasn’t perfect, however. At times his decision-making let himself down, according to Koch, who said after the match that there is still a lot of room for Murasiranwa to improve.

“There was a lot that I liked in terms of saves, but a lot of poor decisions,” said the FC Edmonton boss, who added that he’s being critical to try and bring the best of his players. “Dar today got himself into trouble a lot of the time, thankfully he was able to get himself out of trouble. In this game, the more times you put yourself in trouble, eventually you’re going to get hurt.

“Yes, he made some great saves, but there were several things that I wasn’t happy with his performance, and we’ll go critique that with him to help him learn and grow. Dar’s a great guy, he wants to learn, he wants to get better. I’m pretty certain when I show him video and talk to him about some of the challenges in the game today, he’s going to know right away because that’s the type of guy he is, he wants to address things and he wants to continue to push and get better.”

Daniel Krutzen, who many consider to be one of the best centre-backs the Canadian Premier League has ever seen, only played his first two games of the season in Forge FC’s last two matches, but is already back on the sidelines with another injury.

This one is expected to be minor, with Bobby Smyrniotis saying after the match that the club is taking his situation “day by day” and being cautious to make sure that everything is right with the 26-year-old Dutch defender. Krutzen, a Forge FC original who remains with the club after nearly four full CPL seasons, suffered an ACL tear last November and only just returned to the pitch, before a head-on-head collision followed by an awkward landing against Pacific FC last weekend.

“I think we’ll have a more clear picture of where he’s at during this week,” Smyrniotis offered.

His replacement in the backline, as he has been for most of the season, was Alexander Achinioti-Jönsson. The Swede, playing at centre-back as opposed to his preferred and usual role in the heart of Forge’s midfield, put in his usual strong shift. He completed 73 of his 82 attempted passes and touched the ball 89 times — both team highs as Forge tried to build out of the back — and he also contributed two interceptions, a clearance and completed his only attempted tackle.

He’ll wish he had done better on FC Edmonton’s goal, as Tristan Borges’ successful attempt to poke the ball away from CJ Smith bounced off him, and he was unable to recover before Smith had time to take a few steps in and fire the ball past Henry. It certainly wasn’t entirely his fault, however.

What made Achinioti-Jönsson’s performance all the more impressive, is that he too is dealing with an injury. It was noticeable during the match that he had some kind of cast on his left arm, and after the match Bobby Smyrniotis revealed that his captain on the afternoon had fractured his hand last week against Pacific, but played through it.

“He has a fracture in his hand from the last match, but that’s Jönsson,” Smyrniotis said. “If it’s not something that can keep him from running or something else, he’s going to be out there, going to be doing his thing.

“He was excellent again today for us, good intensity on both sides of the ball. He’s a massive leader, we were missing a couple of other guys on the pitch but he’s put in an excellent performance.”

The young Eddies goalkeeper made four saves in this match, all of them crucial, in a deserved draw for his side.

FC Edmonton hit the road for their final away game of the 2022 season, in Lanford against Pacific FC on Friday night (7 pm PT/8 pm MT). Forge are back at home on Saturday, opening the month of October with a 905 Derby against York United (5 pm ET).