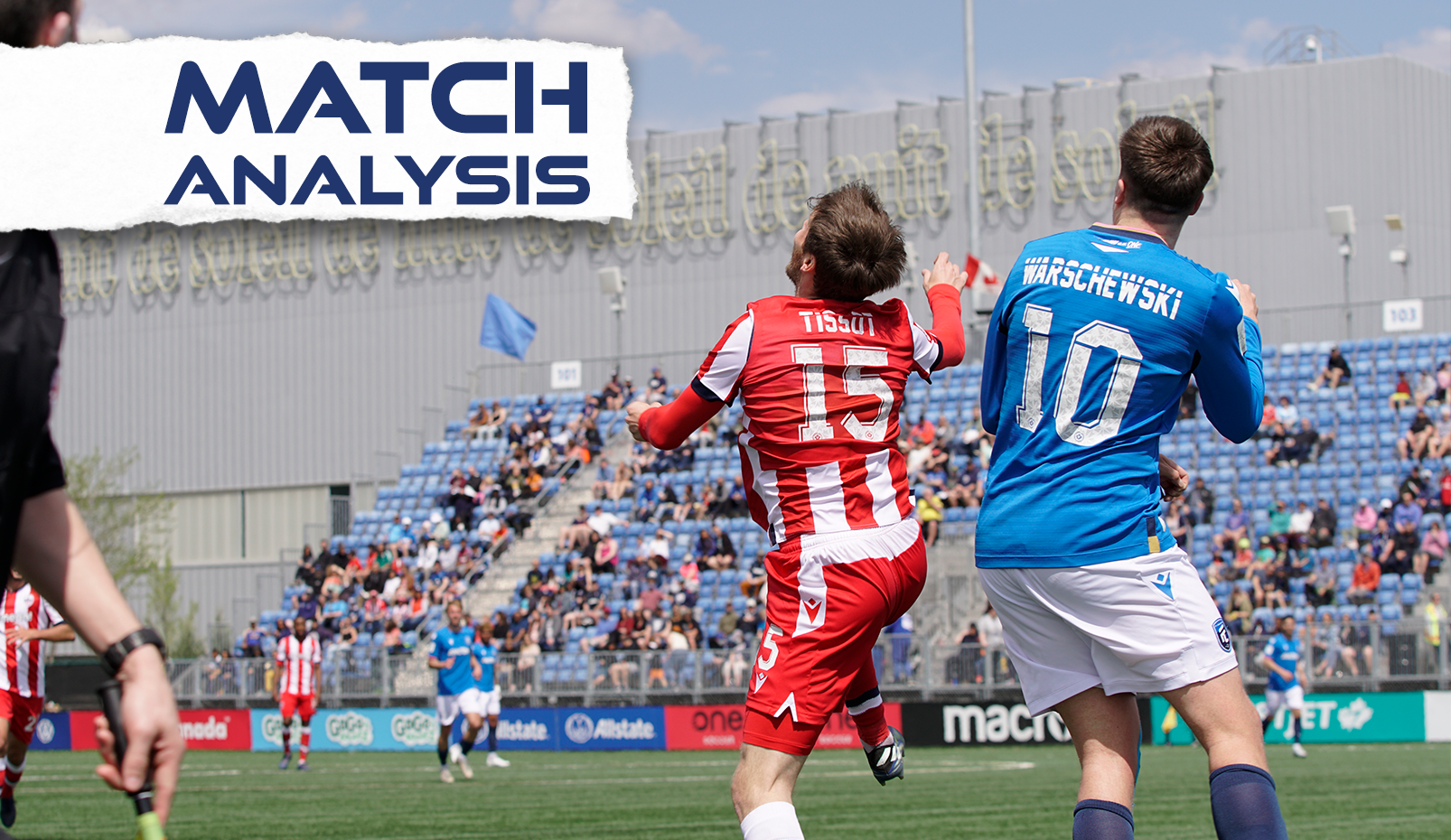 Atletico Ottawa picked up all three points on the road on Sunday afternoon, beating FC Edmonton 2-1 at Clarke Stadium.

Moments after Andreas Vaikla denied his shot from less than six yards away, Brian Wright gave Atlético Ottawa the lead in the 40th minute, curling a low shot into the bottom right corner after running onto a pass over the top from Ballou Tabla. Vaikla would be beaten to that same side in the second half, this time on a penalty from Ollie Bassett.

Tobias Warschewski cut the lead in half with a goal from the other penalty spot for Edmonton four minutes after Bassett, but the home side weren’t able to find an equalizer.

Ballou Tabla showing the quality Ottawa have been looking for

Every week Ballou Tabla seems to be showing signs of improvement, continuing to build into the team and his role within it.

He started the year as more of a right wingback, but after being pushed back higher up the pitch by Carlos Gonzalez has shown more regular flashes of brilliance. He provided the assist on the first goal of the game on Sunday, with a perfectly-weighted volley over the backline, to the feet of Brian Wright, who did the rest.

One on one with the keeper and he finishes his chance 🎯 @brianwright777 opens the scoring for @atletiOttawa in Edmonton#CanPL l 📺: @onesoccer
pic.twitter.com/tmowLNDKiT

Tabla also set up last week’s opening goal for Ottawa against Forge FC, combining well with Ollie Bassett to give their side the lead on the road. Tabla is getting on the ball more regularly now that he’s playing in his preferred role higher up the pitch, and has been getting back into the rhythm that could make him one of the best attackers in the league — a high expectation, but absolutely one that his name carries.

GOAL 🏠@atletiOttawa open the scoring as Ollie Bassett scores a beautiful goal to give his team a 1-0 lead over @ForgeFCHamilton
#CanPL | 🔴 https://t.co/7JFAUhgjL6 pic.twitter.com/WGPGxf8i1K

He’s also finding his shooting boots, but just needs to start finishing off his chances. In the first half of this game, for example, he turned around a couple of defenders before curling a shot toward the back post, but his shot just missed the top corner. That was a low percentage opportunity, but if he can start turning them into goals, and continue to get into higher percentage areas, he’ll reach a whole new level.

“He’s working hard, he’s giving us things not only in attack but in defence, so that’s the way he has to continue helping the team,” Ottawa head coach Carlos Gonzalez said after the match. “The team will also help him develop and grow as an individual.”

Eddies rely on a set piece to score again, but the chance creation and right mentality is there

FC Edmonton were again on the losing side of things on Sunday afternoon, but again were right in the mix for the majority of the match. They were able to get ten shots, three of them on target, and took advantage of a second half penalty to get themselves on the scoresheet.

Through eight matches they’ve only found the back of the net five times, with two of those goals coming from the penalty spot, and another a miracle bicycle kick from Tobias Warschewski in their first match of the season. In their Canadian Championship game against Cavalry a couple of weeks ago it was also a penalty from Warschewski that served as their lone goal. They’re creating the chances they need to find the back of the net, but haven’t been clinical enough, and again needed a goal from a set piece.

Their woes are not for a lack of effort, however. The Eddies are certainly not pushovers, and their record thus far may not be the fairest reflection of how they’ve played, although things have also undeniably been tough.

Almost every time the Eddies have conceded, they’ve gone and pushed for a quick goal to reply, and again did that on Sunday. A few minutes after Ollie Bassett made it 2-0 for the visitors from the penalty spot, Mamadi Camara drew a penalty for his own team at the other end of the pitch, which Warschewski fired into the bottom left corner to make it 2-1. Ottawa had a lot of the chances in the remaining 15 minutes of the match, even after Luke Singh was sent off after picking up a second yellow card for a poor foul on Miguel Acosta.

GOAL 🐇@FCEdmontonNow cut the lead in half as Tobias Warschewski scores a penalty of his own as Nathan Ingham of @atletiOttawa guesses the wrong way.

The challenge for Edmonton now is not giving up that first goal in the first place, and being the team that starts the match on the front foot. They were unable to make the most of the opportunity when they went up 1-0 early in the match in Halifax a few weeks ago, but the ability to see out games and work as a unit will continue to come as the players grow throughout the season.

Ollie Bassett cementing his place among the league’s best players

A new recruit from the champions Pacific FC in the offseason, Ollie Bassett has stepped into this Atlético Ottawa side seamlessly, and steps up for his side every time he’s on the pitch. He’s already been in the Team of the Week on multiple occasions here in 2022, including in both of the first two weeks of the season, and through seven matches, has played all but 15 minutes for the club. He leads the team that category, as well as in chances created, attempted passes and on the defensive side of things, recoveries.

On Sunday he played all 90 minutes, and scored what would end up being the winning goal, a second half penalty that he fired past in-form goalkeeper Andreas Vaikla in the 70th minute. He also led all players in the match with four chances created, six total crosses and 20 passes in the final third. With numbers like that he’s among the best playmakers in the league (tied for third league with eight chances created on the season), let alone on his own team, and if Ottawa go on to have a big season, may see himself among those nominated for the Player of the Year award when it’s all said and done.

On Sunday there were a couple of times where he would receive the ball deep in his own half and drive forward with the ball, slicing through Edmonton players as if they weren’t even there, and his calmness in possession makes him a crucial part of the Ottawa midfield alongside Ben McKendry in the middle of the park.

The only thing Bassett has lacked through seven games is assists, but if he continues to create these chances and get his teammates into promising position, those will come as well.

“Ollie’s been tremendous for us from day one,” said the goalscorer Brian Wright after the match. “At some point in the second half he had a good run of a few give-and-gos and the team just ran across the field. Ollie’s instrumental to our team, and we need him to keep playing and I’m happy he was able to get the goal today.”

Wright scored the important first goal of the match, and would have had a few more if not for Andreas Vaikla’s heroics in goal.

Both sides have over a week off after this match, and neither one is taking part in the Canadian Championship quarterfinals this week. FC Edmonton are next in action on Tuesday, May 31 at home against Forge FC (7 pm MT/ 9 pm ET), while Atlético Ottawa play the next day, June 1, in Winnipeg against Valour FC (7 pm CT/ 8 pm ET).

Watch all matches live on OneSoccer. In addition to its website and app, OneSoccer is now available on TELUS channel 980 and on Fubo TV. Call your local cable provider to ask for OneSoccer today