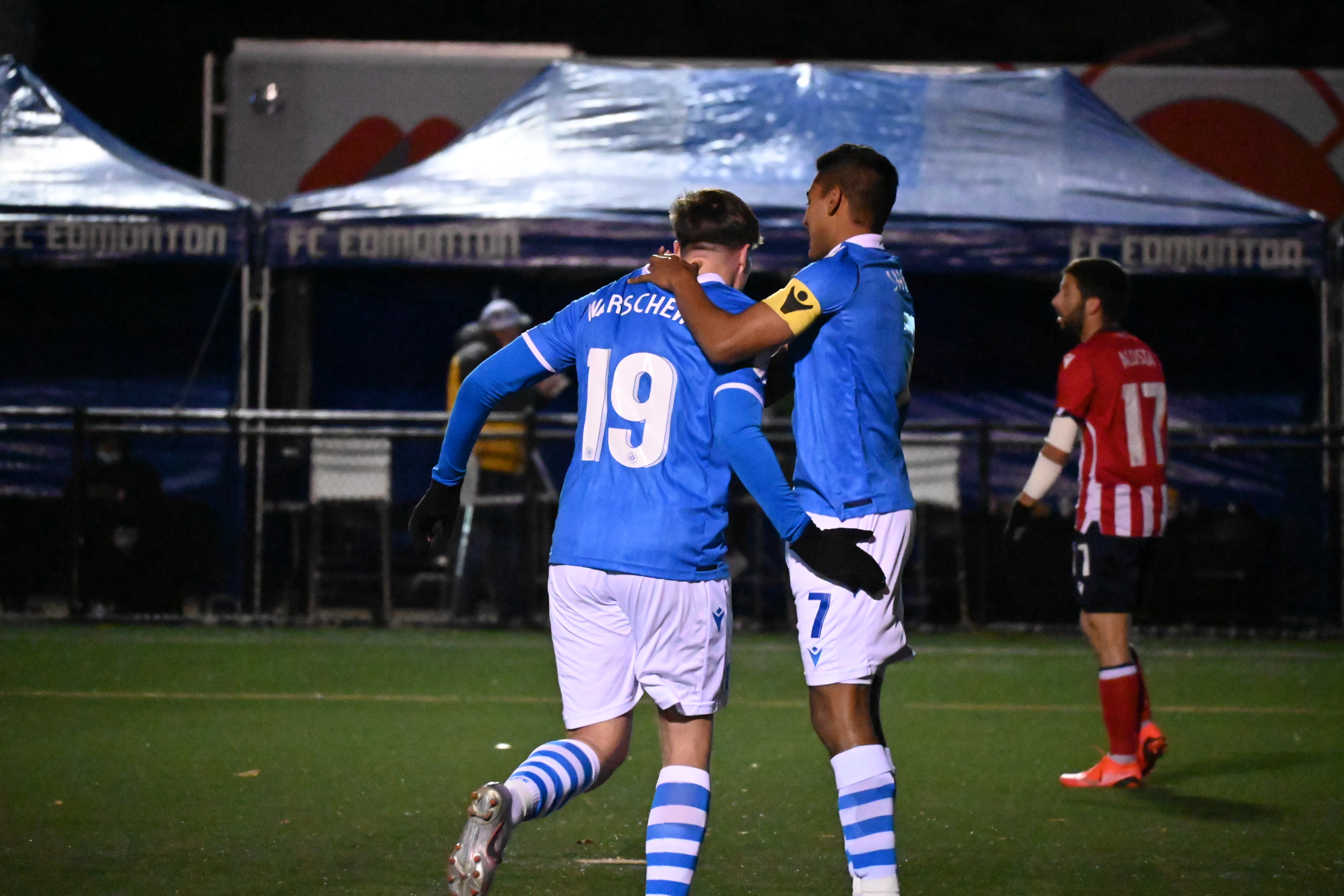 One of the most action-packed matches of the 2021 CPL season took place at Clarke Stadium on Tuesday night, as Atlético Ottawa held on to beat FC Edmonton 4-3. It was the first 4-3 scoreline in CPL history, and one goal shy of tying the CPL record for most goals in a match.

Brian Wright gave the visitors the early lead from the penalty spot, but his goal would be cancelled out just over 10 minutes later as Azriel Gonzalez tied it up at 1-1 with a shot from close range. Ottawa then scored three goals in a row — with Wright adding the first of them just before halftime to finish off an impressive passing play.

Ben McKendry made it 3-1 four minutes after the break with a curled shot inside the far post following a set piece routine, before Alberto Soto finished off a great solo run with a long shot into the top right corner to extend their lead to three. Adam Najem scored a second for Edmonton with a hard shot from a few yards out, before Fraser Aird brought the home team within one from the penalty spot.

Despite their best efforts over the remaining 15 minutes, The Eddies were unable to complete the comeback.

Eddies nearly complete the comeback, but dug themselves into a hole

Despite nearly pulling off a miraculous come-from-behind result, FC Edmonton head coach Alan Koch was disappointed after the match with how his team allowed four goals in the first place.

Individual mistakes let down a strong Eddies backline. Fraser Aird gave up the early penalty that Brian Wright scored, while there were players out of position on Wright’s second goal and McKendry’s strike after the break that allowed Ottawa to thread passes through and create good opportunities to shoot the ball.

Koch said after the match that Edmonton “allowed Ottawa to do what they’re good at” — which is passing through the lines and taking advantage of opportunities in front of the goal when they get them.

“I’m tired of talking about the fighting spirit and character of the group,” he added. “We know we have the character, we know we’re going to fight. Quite frankly, it was a lack of intelligence at times tonight that got ourselves in a hole.

“We know we’re going to fight, we know we have resilience, I’m proud of the guys — that’s part of who we are. I don’t think we managed the game very well tonight. We had a good week last week, and took probably two steps forward, and I think tonight was a step back.”

Midfielder Shamit Shome echoed his coach’s statements, and called the fight and desire to win the “minimum” expectation for his team, He added that he wants his team to respond to their performance with a better one in the next match against York United on Sunday.

“When we show fight in a game, we’re not proud of that because we know that’s the minimum, and that should be the minimum of any soccer team,” said Shome. “We have to build on it in terms of the different levels. The next level is we show discipline, we show maturity, we show intelligence, and today we didn’t show that.

“We showed that in the past couple of games, but we didn’t show it this game. It’s disappointing that we couldn’t keep building, but we know what we did wrong and we have to go back to the drawing board and come out flying in the next game against York for sure.”

For the second match in a row, Mista set up his Atlético Ottawa team in a formation with three centre-backs — this time a 5-4-1 with Miguel Acosta and Vashon Neufville operating as wingbacks on either side. Milovan Kapor played in between Keesean Ferdinand and Drew Beckie centrally — a trio of defenders that had their hands full all night long.

The Eddies took 21 shots in this match — 17 of them from inside the penalty area, meaning goalkeeper Dylon Powley also had a busy night, making six saves. The last 15 minutes in particular were a real test for Ottawa, as Edmonton kept pushing for an equalizer after Fraser Aird’s penalty made it 4-3.

Ottawa’s back five combined for nine tackles, eleven clearances, eleven interceptions and five blocked shots in an impressive effort as a unit. On another night — as they’ve been prone to doing at times this season — they might have conceded a late equalizer, so considering the onslaught of Edmonton attacks toward the end of the match, holding on for three points should be something of a morale booster.

“We played with three centre-backs and two very low fullbacks,” said Mista after the game. “We need the guys outside to come inside to receive the ball, and I think we did. They closed a lot of space, and we tried to find the spaces between the lines. We had a lot of possession, especially in the second half, and the reason is that we are more comfortable when we defend with three central defenders.

“The guys have a confidence, and this is a different format to play, but we need to adapt.”

FC Edmonton attacker Tobias Warschewski has been a revelation for the team this season, and put in another strong performance on Tuesday, operating on the right side of The Eddies’ attack. He had a major part to play in all three of his side’s goals, and is a nightmare to defend no matter where he’s deployed on the pitch.

Signed as a striker, but sometimes being deployed as a wide player recently, Warschewski has thrived in his new role.

The German forward is dominant physically against most defenders, able to hold off multiple players and bully his way through opposing backlines, but he’s far from a one-trick pony. Warschewski is also very good with the ball at his feet, able to beat players one-on-one, or dribble his way out of tight spaces.

His skillset was on full display on Tuesday, as he picked up a pair of assists and drew the penalty that Fraser Aird scored late in the second half. The first assist was a dangerous low ball fizzed along the ground to the back post, which none of the Ottawa defenders were able to deal with. Azriel Gonzalez was there, however, and redirected the ball into the top-left corner to tie the match at 1-1.

The second was a ball that he lobbed into the box with a half-volleyed cross, which found Adam Najem in the area, who fired home Edmonton’s second goal.

“He’s silky smooth on the ball,” Koch said of Warschewski. “He’s very difficult to manage — you put one, two, three players around him and a lot of the time he’ll come out of it.”

“He’s a difficult player to defend, he can do several different things,” added Shome. “He’s deceivingly quick, and he’s a big guy, he can hold up the ball and for a guy that big and strong, he has very good feet, kind of like Easton (Ongaro) in a sense.

“His delivery is amazing, defenders don’t even know how tight they can move to him because if they go too tight he’ll go right past you. If you don’t go tight enough he’ll put in a good ball.”

Both teams are off to Ontario for matches this weekend. FC Edmonton head to York to take on York United on Sunday, October 15 (2 pm ET/ 12 pm MT). Atlético Ottawa, meanwhile, head to Hamilton to take on Forge FC on Saturday, October 16 (3:30 pm ET). Watch all matches live on OneSoccer.