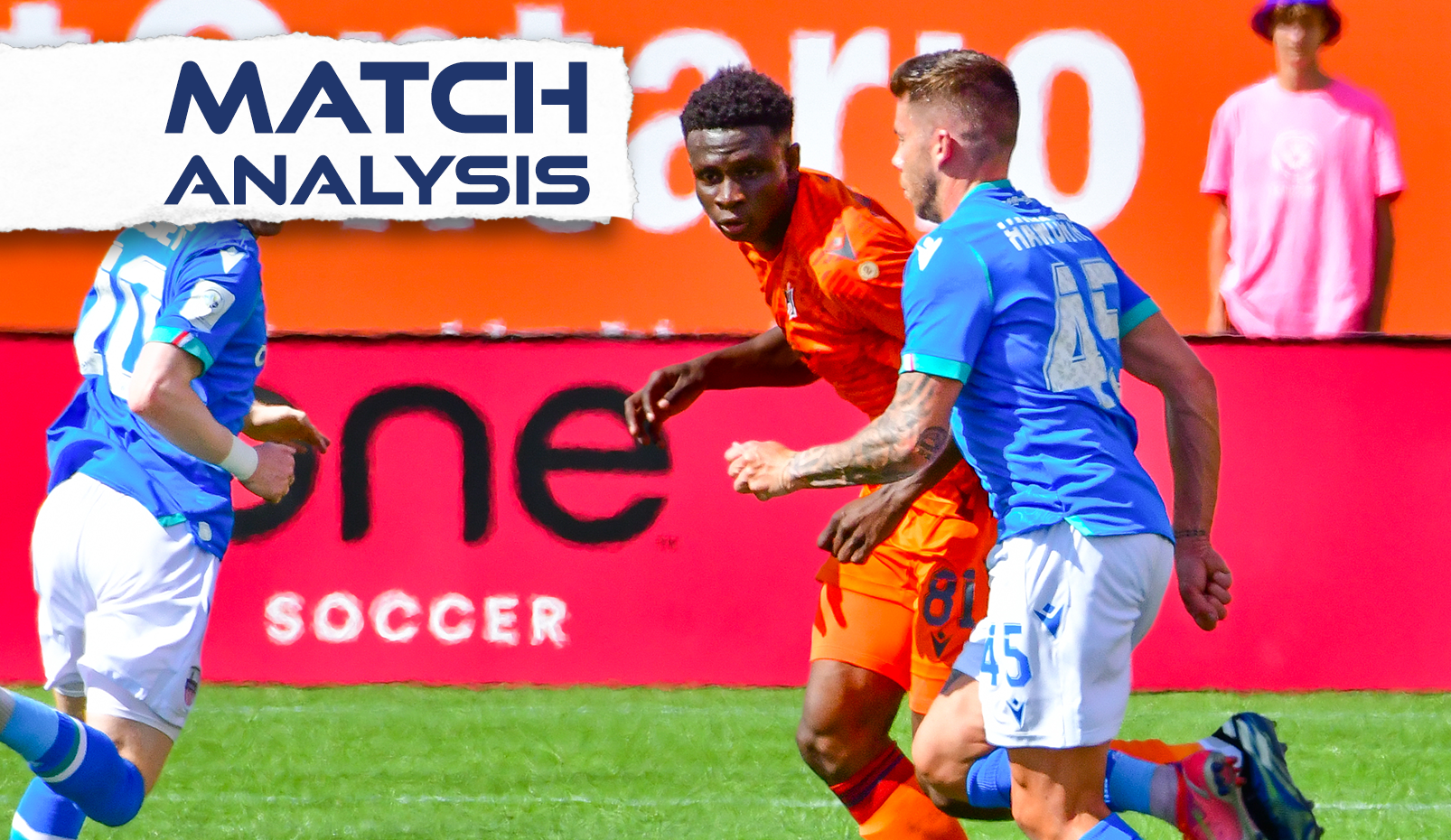 Atlético Ottawa completed a perfect two-game road trip on Sunday afternoon, beating Forge FC for the first time in their history by a 1-0 scoreline. After a tough first half which saw neither side able to put a shot on target, eventually Ottawa found their breakthrough courtesy of a stunning Ollie Bassett free kick in the 78th minute.

As a result, Ottawa moved up into a tie with Cavalry FC for top spot in the league table, as they continue to put together strong performances away from home.

Ollie Bassett’s incredible 2022 season continued in full force on Sunday, as the midfielder made the difference once again for his side. Since his arrival in Ottawa and his shift to playing a box-to-box midfield role, he’s established himself as one of the top players in the league — and likely one of the first names on Carlos González’s team sheet most weeks.

The 24-year-old is now up to four goals this year (Sunday being the second straight game he’s scored in), though his contributions go well beyond the scoresheet. Bassett is, in many ways, the engine of Atlético Ottawa’s play, helping organize the group around him with intelligent positioning and composure on the ball. His workrate, particularly off the ball, is key to the counter-attacking opportunities Ottawa look to create, with his ability to step forward to press and then return to his central position quickly.

Of course, the set-piece he scored from was tremendous as well. The moment was controversial — Forge’s coaches and players remain adamant the goal shouldn’t have counted, due to an Atleti player standing in the wall — but nonetheless the execution of the strike was phenomenal.

In a match where Ottawa didn’t have a lot of the ball or many extended visits to the Forge half, they were always going to need a moment of individual quality to find them a goal. Malcolm Shaw won the set-piece thanks to his and his teammates’ commitment to finding counter-attacking opportunities, and then it was Bassett who stepped up when needed to bank a massive result for Ottawa.

“I think there was three of us that actually wanted to take it; Carl (Haworth) initially said he fancied it, and Malcolm (Shaw) was obviously the guy that won it and he wanted to take it as well,” Basset said postmatch about the free kick. “But yeah, I think we spend time in training, after training, practicing these types of situations from different areas outside the box so it’s just about trying to put the practice from the week into the game when you get the opportunity.”

As Ottawa continue to establish themselves as one of the most difficult teams in the CPL to beat, they’ll be grateful for a player of Bassett’s abilities who can seize a close game and deliver a result with individual moments like that.

Atlético Ottawa have begun to develop a strong footballing identity this season, founded primarily on their stout defending and cohesive structure. Against Forge, they defended in a solid 4-5-1 formation for the most part, with Vladimir Moragrega the lone striker — although midfielder Ollie Bassett often stepped out to press as well before dropping back into his line.

As a result, Forge found it extremely difficult to get into areas around the top of the box and the half-spaces; the congested midfield meant it was hard for the likes of Aboubacar Sissoko and Kyle Bekker to pick out passes toward attackers.

Ottawa’s low block was certainly not unexpected; it’s become a key part of Ottawa’s tactical plan against sides like Forge that can be so dangerous in transition. Try as they might, though, they couldn’t find a way through in part because of how firmly Ottawa stuck to their shape and refused to be pulled out of position to allow passes through.

The effectiveness of Ottawa’s team-wide defending is somewhat hard to quantify; they defend spaces very well rather than necessarily relying on individual tackles or blocks. Instead, they occupy positions that force the opponent to play around them in less dangerous areas, cutting off the central passing lanes.

This Ottawa side continues to grow and evolve in Carlos González’s first year in charge, and they have begun to show that they can find results in various different ways. In some contests, perhaps against opponents that don’t typically play with as much possession as Forge, they’ve shown an ability to be more expansive and get on the ball, but in this game they did very well in the low block — a strategy they’ve used to very good effect earlier in the season, and which remains an important tool in their arsenal.

“In a season of 28 rounds, you have to be able to win in different scenarios,” González said after the game. “You cannot always try to win in the same way because if not, you lose points. This is what we’re trying to do, we’re trying to make the team grow, also with the ball. I think in certain moments, in certain games, we’ve been better than the other teams, we’ve had the possession and we’ve won with both solutions; other games are tougher game that we have to adapt to maybe having less of the ball, but we also know that we’re going to have our chances and our opportunities.”

He added: “The best thing is the mentality, the adaptability of the players and how they’re adapting to the different ideas, and I’m so proud of that.”

As was the case at some points earlier in the season, Forge’s greatest concern early in this match was an inability to finish off the chances they created. They had no problem getting up the pitch, particularly with Ottawa quite content to cede possession and sit back for extended stretches, but when it came to the final action they weren’t able to put the ball in the net.

The Hammers entered the attacking third 36 times in the first half, finding a healthy 17 touches in the Ottawa penalty area, but they couldn’t turn any of those into shots on target — their 0.79 expected goals in the first frame demonstrates that the high-quality chances mostly eluded them. That said, Terran Campbell and Aboubacar Sissoko both found themselves frustrated by failing to score chances that both players typically would bury without issue.

When all was said and done, Forge’s 77 entries to the final third was an impressive figure, but a lot of those came in lower-danger areas. Their heatmap for the match as a whole (see below) paints a picture of how much Forge struggled to get into the middle of the pitch or into the penalty area.

That said, it’s not as though they didn’t have opportunities; certainly, they did, and a few of those chances will be ones that Forge’s strikers will want back, but the fact that they didn’t put any of their nine shots on target is indicative of the kind of day it was for them.

Forge coach Bobby Smyrniotis was understandably frustrated after the match, with his side now having lost two 1-0 games in a row at home after Wednesday’s Valour game.

“We’ve created a lot of situations, we’ve played against a team that does a very good job sitting in an ultra low block — a lot of times with nine players in their own box — and they’ve taken one shot on goal and it’s a goal, just like Wednesday,” Smyrniotis said. “So obviously it’s a little bit frustrating, especially with how that goal has gone in, but that’s how the game goes today.”

He went on to add: “I don’t know if it’s finishing; sometimes you just need to find those right moments. The spaces were very condensed, you look at this game and we know Ottawa has been a low block team in all of their games, we know they’re probably gonna come into this game and focus on that a lot more… We’ve had our opportunities, we’ve gotten to the good situations, we look at the numbers right now — did we need to be a little quicker in certain areas of the park, did we need to be a little bit more vertical in our movements. That’s something we talked about, but we’re lacking in moments.”

The Northern Irish international was superb once again in Hamilton, and not just because of the highlight-reel free kick. He did a lot of work stepping out to press when required and dropping back to help defend, and he made a team-high 11 passes into the final third.