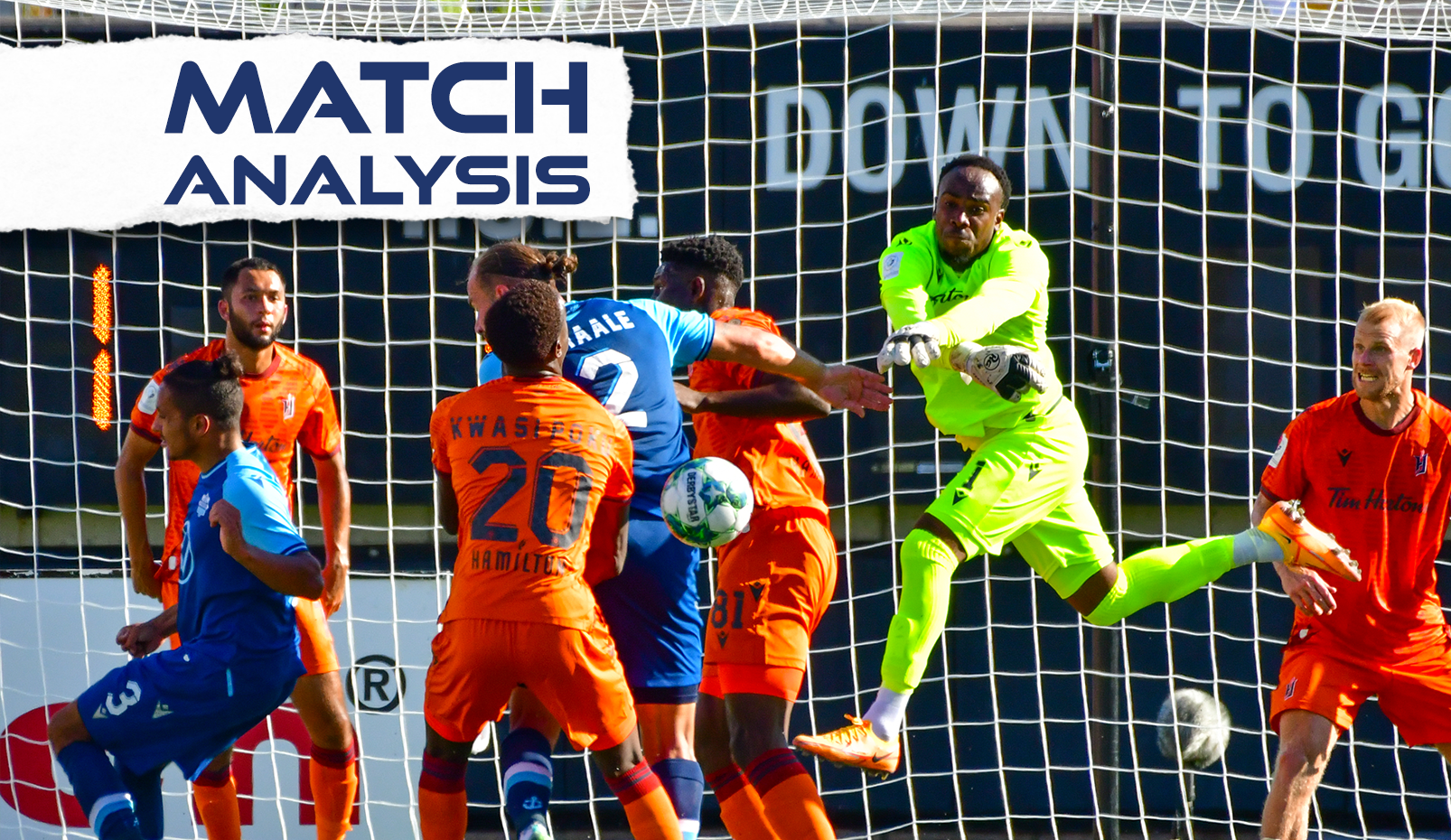 The quickest goal in Forge history secured a club record sixth straight victory as they defeated HFX Wanderers 1-0 on a scorching hot day at Tim Hortons Field. Woobens Pacius’ header two minutes into the match was the difference coming from Forge’s only shot on target.

Halifax was full value for that stat, as they provided an organized and resilient defensive performance that significantly limited the lethal Forge attack. Unfortunately, the visitors were not able to take their chances, and are now winless in their last six.

Forge consolidated their place at the top of the CPL table, while a seventh clean sheet of the table ties Atlético Ottawa for the league lead in that category.

They have won at home, they have won on the road. Against top teams, and teams who have been struggling. They won 4-0 last weekend, and 1-0 today. When asked what has made a club-record six-game unbeaten streak so impressive, Forge manager Bobby Smyrniotis said it was the diversity of the way they have been able to pick up three points.

Against Halifax, it was an incredible early goal that made the difference. Forge converted their only shot on target, a header from Pacius, who now has 10 goals on the season. He is just the second Forge player to reach double-digits in a CPL season, following in the footsteps of 2019’s Golden Boot winner, Tristan Borges.

Pacius is now up to 10 goals on the season 📈

It certainly wasn’t their best performance after that, as they struggled to find chances against a very solid Halifax side. In fact, they arguably should have at least tied the match, with Halifax winning the expected goals battle 0.81 to 0.37. But great teams find a way to win when they aren’t at their best, and Forge did that against on Saturday.

Forge will have a chance to tie the league record when they meet Cavalry on Friday in Calgary. Coincidentally, that record is currently held by Cavalry, who won their first seven matches as a club back in 2019. To make the storyline even more intriguing, it was Forge that ended that historic 2019 run with a 1-0 victory.

Halifax adopt controlled, defensive, approach in an attempt to take the sting out of Forge

When Halifax conceded inside the opening two minutes of the match, it looked as though this would be another ugly afternoon for the Wanderers. But instead, their incredibly cautious defensive approach was able to limit Forge’s chances.

They played with a very rigid back five, with fullbacks that barely moved up the pitch. When they won the ball back, even in transitional moments, they would only send a few players forward until it was clear they had control of the situation and the ball.

Halifax was also much better in their control of the ball, something that manager Stephen Hart had bemoaned as not being nearly good enough over their recent winless streak. Saturday, against a Forge side who have shown an ability to press and win the ball back very well, Halifax completed an impressive 88.9 per cent of their passes.

In the Hamilton heat, they also stayed incredibly organized and rarely broke their shape to press Forge. They conceded almost the entire attacking half to Forge, but were able to limit the number of high quality chances the Hamilton side had.

“We tried to bring them forward a little bit and maybe play behind or play through them but one of the main things I wanted was us to be tidier on the ball,” said Hart after the match. “To keep the ball better, to move the ball, the things that you see every day in training.”

Evidence of this is the chart below, which is in fact the average position of their starting players, not a formation chart as it almost appears to be.

It was effective defensively, as the usually high-powered Forge attack only had one shot on target over the course of 90 minutes and just 0.37 expected goals.

“To be honest I think we stick to the plan, that the coach said,” said Halifax defender Zach Fernandez after the match. “We keep the ball, with a back five it is harder to have a solution upfront but when we had the ball I thought we were good technically. Forge controlled a little bit more the ball than us, which was okay. But we stick to the plan and unfortunately, we conceded early.”

After some back-to-back 1-0 home losses to Valour and Atlético Ottawa, Forge has mostly been able to shift and punish teams that line up against them in defensive blocks. Today, Halifax was able to buck that trend.

“They’ve worked hard from the first minute to the last minute, not just in their defensive structure but how they are coming out in the counterattack,” said Smyrniotis. “So I don’t know if we figured them out, I’m just happy we have three points.”

Goals win games, but during their six-game game win streak Forge has also taken a lot of pride in their defensive record, allowing just three against. Today was their seventh clean sheet, tying Atlético Ottawa for best in the league, and three of those clean sheets have come in the last six matches.

They have allowed just 14 goals against this season through 17 matches, or 0.8 goals per match. That is five fewer than the next best, also Ottawa.

“You guys hear me talk every week about the attack, but one thing I hate more than anything is being scored on,” said Smyrniotis. “We must defend in the way we attack and that is what we preach with the guys we are doing a brilliant job on both sides of the ball and we just need to keep on motivating the guys to keep on going forward and keep on doing it.”

This was another match where Forge’s defenders had a lot of the ball as they built out from the back. Alex Achinioti-Jonsson and Rezart Rama had 101 and 106 passing attempts respectively over the course of 90 minutes. Rama had a stunning 29 passes into the final third.

“I think what has been a difference maybe from the last couple of years is we have been more dominant on the ball and I think that’s also in the way that we have been building up,” said Achinioti-Jonsson. “The trust we have in each other, not just me but in all the players back there. I think that it is something we started doing last year but we just kept it evolving.”

Should they turn it over, Forge’s defenders and midfielders are incredibly good at winning it back quickly. Achinioti-Jonsson was especially effective at putting out fires at the back against Halifax, winning back possession six times and making two tackles.

Edmonton gave Rama plenty of space to operate during this match and operate he did. He had two successful dribbles, and five attempts, carrying the ball from the back on several occasions. He also led the match with 138 touches and an astounding 29 passes into the final third.

Forge is back on the road, where they meet Cavalry FC at Spruce Meadows for the second time in the past two weeks on Friday, August 12 (9:00 p.m. ET). Halifax, meanwhile, is back at home where they face Valour FC On Saturday, August 13 (3:00 p.m. AT).