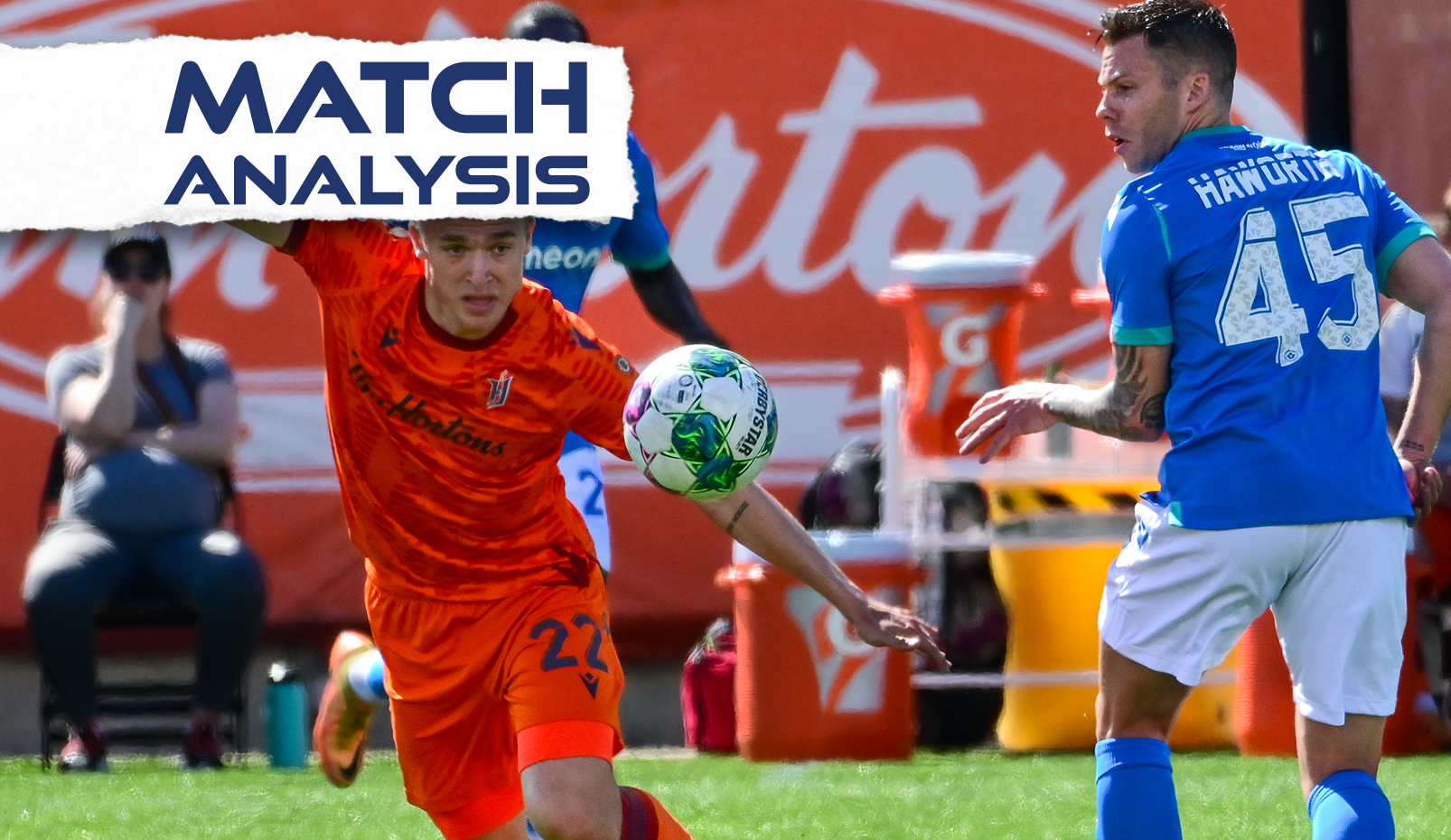 Forge FC and Atlético Ottawa shared the spoils on Saturday afternoon at Tim Hortons Field, as highlight-reel goals from Ollie Bassett and Noah Jensen were enough to produce a 1-1 draw between the two Ontario sides. Though Forge had a massive advantage in possession and heavily outshot the visitors, a second goal eluded them and the stingy Ottawa defence held firm to claim a well-earned road point.

Forge forced into makeshift fluid backline with no healthy CBs

Bobby Smyrniotis was not dealt the easiest hand for this match, with none of his natural centre-backs fit to play. Alex Achinioti-Jönsson, as he has done on plenty of occasions for Forge, stepped into the backline, and left-back Ashtone Morgan joined him as a central defender.

Forge opted for a fluid defensive shape, which functioned as a back three in possession (with Aboubacar Sissoko playing to Achinioti-Jönsson’s right), but it often turned into a back four when defending as the left-sided Kwasi Poku dropped back when needed — and occasionally a five, when David Choinière fell back on the right side.

The tactic worked particularly well in possession, with Achinioti-Jönsson’s ability to spray passes to either side giving Forge a good anchor at the back. Poku and Choinière also managed to get very high up the touchlines and into the box thanks to Sissoko and Morgan sitting quite wide in the back three while Forge had the ball.

Defensively, Forge might not have been quite as solid as they would be with natural centre-backs in the line and they gave up quite a bit of space to the Ottawa forwards, particularly when Poku was caught high up and couldn’t get back in time to cover the left side. Still, they defended the (admittedly limited) chances Ottawa created for the most part, keeping them to just two shots on target — one of which was the goal.

“Have you ever seen a team play with no centre-backs?” Smyrniotis quipped postmatch. “We’ve done it today and we’ve done a pretty good job with it. We’ve got guys that are versatile. It makes your head spin a little bit as a coach, but there’s always a solution in how you’re going to get the best out of different players.

“Today it was Jönsson, who has been excellent playing as that kind of pivot there, and Ashtone and Abou, they’re excellent at allowing us to progress the ball a little bit quicker up the field in playing against a low block, something we’ve done in the last couple of games going back to Wednesday.”

He added: “The guys were very good on the ball. How they were defensively, I think it was okay, but they didn’t have much to do, so maybe another day it’s a little bit different. But we’re always going to find the solution, we’re never going to complain when somebody’s missing.”

Versatility and adaptability has always been a trademark of Forge FC in the CPL, and Saturday was just the latest chapter in the impressive tactical book this club continues to write.

With Ottawa defending in a compact 4-4-2 formation, Forge knew from the get-go they’d be in for a difficult afternoon trying to break down the block and get touches of the ball in the middle of the pitch.

The visitors did an excellent job of blocking off passing lanes through the centre, and in doing so they effectively neutralized the threat of Tristan Borges, who was playing in a number 10 role below Forge’s dual strikers. Whenever Forge attempted to build up an attack from the back — as opposed to a quick transitional play — Ottawa were very deliberate in shielding the central channels, and Borges in particular, to prevent Forge from making incisive passes into the box.

Talented player that he is, Borges still created three good chances for Forge, and he was credited with an assist on Jensen’s goal, but he was only really able to come alive in moments of open, transitional tempo where long balls or switches of play allowed Forge to bypass the midfield and play past it before Ottawa had time to set themselves.

Still, the pairing of Ollie Bassett and Abdou Sissoko in the middle did an excellent job of holding their shape and cutting off lanes in the middle of the pitch. Ottawa assistant coach Kwesi Loney — patrolling the touchlines in place of the suspended Carlos González — explained that he’s been impressed with the partnership developing between Bassett and Sissoko.

“We found that those two are now starting to create a bit more of a synergy together, starting to read each other’s movement a little bit better,” Loney said. “Obviously playing with two in the middle you need to cover a little more ground and there needs to be a better understanding of that space, and we found they did a really good job.”

The Hammers will likely leave this game feeling as though they left two points on the table, considering the volume and quality of chances that they were unable to finish. With 67.7% possession for the afternoon, they generated 16 shots to Ottawa’s six, but they managed to put just three of them on target.

Forge’s 37 touches in the box and 58 final third entries, as well as their 43 crosses, paint a picture of the kind of bombardment they levied at Ottawa’s penalty area, but they continued to lack the clinical edge required to convert more of those opportunities into goals.

In more positive news, though, Forge were able to work on a new attacking structure, with natural strikers Terran Campbell and Woobens Pacius playing fairly close together in a two-man strike pairing, instead of the front three they’ve deployed in most games.

Bobby Smyrniotis was fairly pleased with the early signs from that pairing playing off each other, although the finishing left something to be desired — Campbell had a few very good looks at goal but hesitated perhaps a split-second too long and had his shot blocked.

“We have different things that we’ll look at,” Smyrniotis said. “It’s something we worked on a lot in preseason this year, working on different setups and basically how we occupied the zones we want to be in with different players against different opponents — and sometimes it’s also forced upon you by who you have available.”

The Forge boss added: “But again, we thought this was a good one, seeing Woobens and Terran playing together. I thought they were very good in their movement, and we’ve had a lot of chances around the goal but it hasn’t gone in for them.”

Pacius finished with four shots and a team-high seven touches in the box, while Campbell delivered two shots — though he won’t get credit for a third where he was flagged offside. If Forge are able to get that pairing to click as a dual strike pairing, they may be able to start turning more of the possession they’ve enjoyed all year into goals.

Aside from his goal — which was an exceptional finish after a delightful piece of link-up play — Bassett delivered a very strong performance in the centre of the park as a box-to-box midfielder, covering a lot of ground defensively and helping spring a few counter-attacks.

Both sides will head out on the road next weekend. Forge travel to Halifax for a Friday night clash with HFX Wanderers on May 20 (6 p.m. ET/7 p.m. AT), while Atlético Ottawa will be in Alberta to play FC Edmonton on Sunday, May 22 (4 p.m. ET/2 p.m. MT).