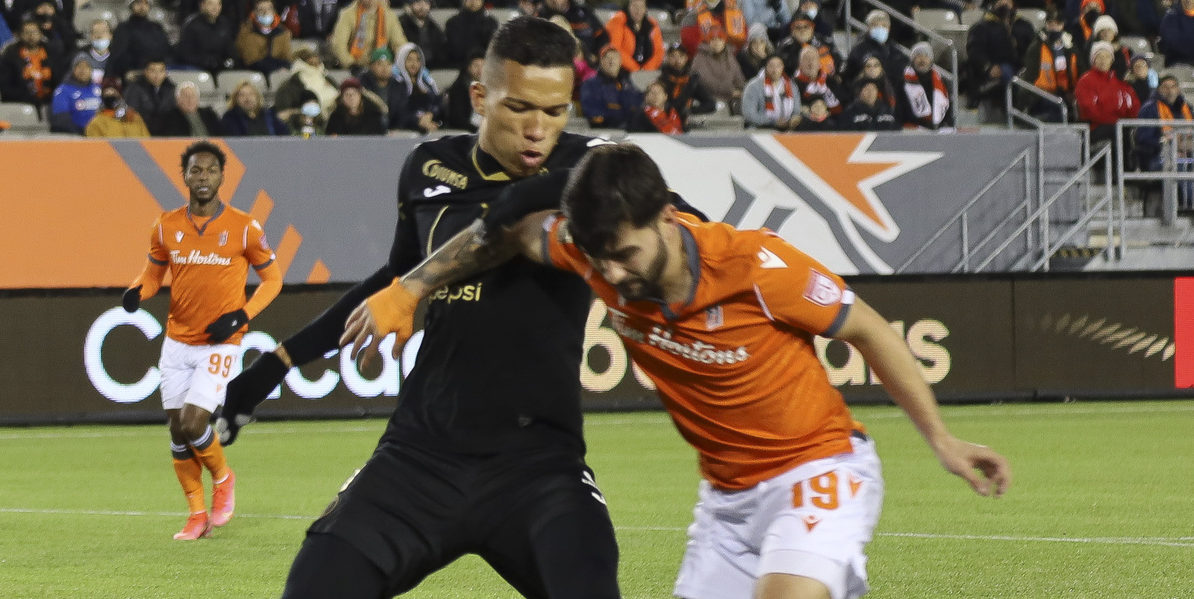 Forge FC battled back from the brink in Leg 1 of their Concacaf League semi-final tie, as they turned a 2-0 deficit into a 2-2 draw at Tim Hortons Field against Honduran club FC Motagua on Wednesday night.

Motagua broke the scoreless deadlock just before halftime, as Kevin López snuck behind the backline to get on the end of a cross and score (against a Forge side playing with 10 men with an injured player on the sideline). The visitors doubled their lead after the hour mark, as Marcelo Pereira evaded his mark on a set-piece to head home a long free kick and make it 2-0.

All was not lost for the Canadian side, though, as Joshua Navarro found a goal for them with a header off a corner kick in the 84th minute. And then at last, with almost the final kick of the ball, it was Kwame Awuah who found his way behind the Motagua defence to claim a rebound off the goalkeeper and score a heroic equalizer in the fourth minute of added time. So, Forge will head down to Tegucigalpa needing just a win to book a ticket to the Final.

Forge refuse to be counted out, claw back into the tie

Just when it looked like Forge were on the brink of seeing their Concacaf League dream end, having gone down 2-0 in their home leg, they found a way to turn a bleak night into a special one.

“I thought we had an excellent first half, we just needed to keep at it,” coach Bobby Smyrniotis said postmatch. “We were stung in the second half, but you’ve just got to keep on going in these games. That’s the mentality that we have from playing two, three games a week since we started this season.”

Sure, they’re on the back foot still — allowing two away goals could prove an issue in the second leg if things end level down in Honduras — but just the fact that they managed to fight their way back into the game in the final half hour, despite Motagua’s second goal taking the wind out of their sails somewhat, speaks volumes about this side. In the quarter-final against Santos de Guápiles, Forge lost 3-1 in the first leg on the road before producing some magic to win 3-0 at home and win the tie.

This time around, with the home leg coming first, they knew things wouldn’t get any easier after this one; they made use of every minute on their own turf, in the (actually quite mild) Canadian autumn, to try and get back into it rather than leaving this game with a sour taste and hoping to turn things around next week.

Smyrniotis added: “We’ve got a lot of work ahead to do. We’re gonna head down to Tegucigalpa next week, and we’re gonna try and take care of business there, but our fans here, they left very happy. They left with a great memory, from our fans older in age to the ones older, and that’s what we need. We need to energize our public, we need to energize our city around this team, and just keep on doing things like we did tonight.”

The match took on a massively different tone just five minutes before halftime, when Forge’s stalwart centre-back Daniel Krutzen appeared to twist his knee in the turf and went down injured. Though he attempted to return to see out the half, he ultimately limped off the pitch with the help of a trainer.

Forge spent a handful of minutes playing with 10 men, as they prepared the substitution (or perhaps contemplated trying to get to halftime safely, just in case Krutzen could continue). In that stretch, a quick Motagua transition gave them a numerical advantage in the attacking half, and their star winger Kevin López managed to get some separation from Kwame Awuah in the box to bring down and finish a cross, making it 1-0.

Hand forced, coach Bobby Smyrniotis went to his bench — but not for the player most might have expected. Rather than bring on Garven Metusala in a more like-for-like swap, he deployed striker Mo Babouli — but in a central midfield role, as Maxim Tissot dropped into the back four.

The tactical shift was a fascinating one; with so many other attacking players already on the pitch (Joshua Navarro, Omar Browne, Woobens Pacius, and Tristan Borges), they added yet another, as Kyle Bekker moved into a deep-lying role where Alexander Achinioti-Jonsson often sits.

Tissot admitted postgame that this was the first time he’s ever played centre-back in a two-man pairing (he’s done it in a three before), but Forge assistant coach — and former centre-back — David Edgar has shown him the ropes a little.

“You’ve just got to see which is the best way at the moment to move the team, and keep it also forward-thinking,” Smyrniotis explained. “Bekker’s played in the six role for us, where he gets on the ball and kind of quarterbacks things from that position. Mo (Babouli) has played a little bit in the midfield for us, he’s a guy who was versatile this season … He came in a little bit deeper and as the game went on, got further forward.

“I just wanted to make sure that the guys knew, we lose a crucial player in this but we keep the momentum of trying to attack and trying to play our game and playing football. I think that helped us for long stretches of time.”

The Honduran side’s experience and quality was on display at Tim Hortons Field, particularly in the way they put Forge under pressure in their own half. Whenever Forge attempted to play from the back through their fullbacks, Motagua’s wide midfielders from their 4-4-2 formation immediately pinned the orange shirts back and took away options for advancing the ball.

To their credit, Forge did quite well a few times at breaking the press — Kwame Awuah, in particular, beat his defender a few times with the ball, and Joshua Navarro’s movement managed to open up channels for forward or diagonal passes into half-spaces that helped Forge into the attacking third.

Still, Motagua took away a lot of Forge’s speed in possession by forcing players to turn backwards or pass into the crowded middle of the pitch; with both sides heavily favouring the ball side in their positioning, there was little room for playing forward along the ground.

The visitors punished Forge’s mistakes well; any errant pass was often met with a rapid counter-attack and a visit to the attacking third. Both of their goals came from crosses into the box (one from a set-piece), where the Forge defenders might have slightly misjudged the play and allowed the Motagua forward to get under the ball.

Set-pieces and crosses were identified, by both managers, as an area of focus heading into this match, and it seems that preparation was successful for Motagua.

Forge, for their part, pressed quite high at times as well, Navarro and Omar Browne getting forward out of possession. Motagua also struggled to move quickly out of the back because of that Forge press.

The hero of the day. The highlight, of course, was Awuah’s determined effort to score in added time and make it 2-2, but he was excellent all night along the left side and was the driving force helping Forge get forward.

Leg 2 of this semi-final tie will be played down in Honduras next Wednesday, December 1 at 8 pm EST, before Forge take part in the Canadian Premier League Final on Sunday, December 5 at Tim Hortons Field. Watch all matches live on OneSoccer. In addition to its website and app, OneSoccer is now available on TELUS channel 980 and on Fubo TV. Call your local cable provider to ask for OneSoccer today.