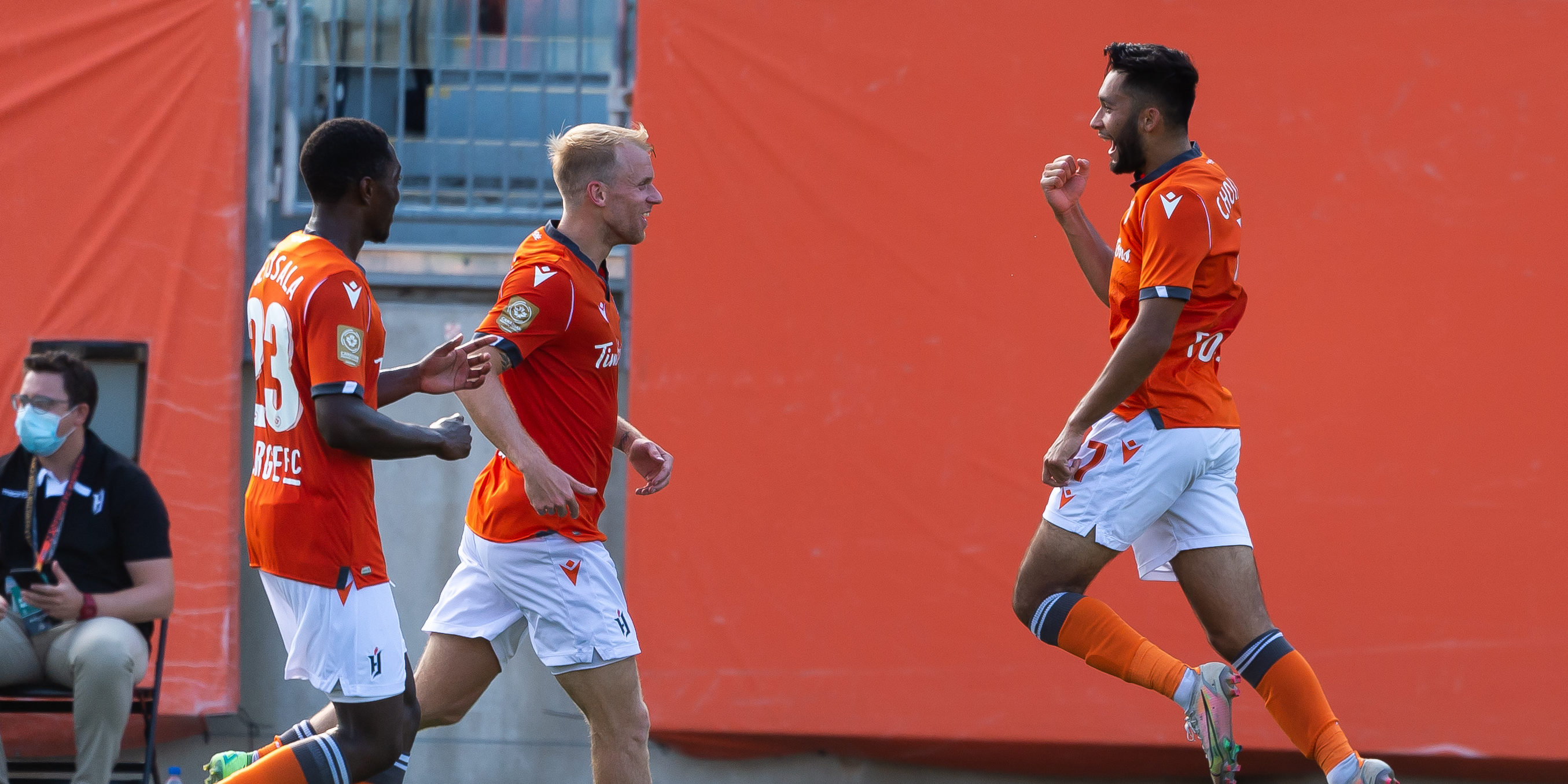 Forge FC climbed to the top of the Canadian Premier League table on Saturday afternoon, beating York United 3-1 in the latest 905 Derby.

Tristan Borges scored the opening goal, striking from close range after Kyle Bekker headed the ball down to him in the penalty area following a quick counter attack. Diyaeddine Abzi tied it up at 1-1 for York in the 39th minute, firing the ball home after a counter attack of their own, started and finished by The Nine Stripes’ left back.

Woobens Pacius scored his third goal in two matches right at the end of the first half, beating York goalkeeper Niko Giantsopoulos with a header after Borges put it on a plate for the young striker.

Forge would double their lead in the 74th minute, as David Choinière sent the fans at Tim Hortons Field home happy with a sensational strike. After receiving the ball at the edge of the 18-yard box, Choinière made some room for him to shoot, and smashed a ball into the top right corner, off the bottom of the crossbar and in to seal the three points.

From minute one to minute ninety, Saturday’s match was full of high-tempo, end-to-end action as both teams continually pushed for more goals. All three tallies in the opening 45 minutes came from counter-attacks as the battle in midfield between the two sides proved to be the difference.

On the first Forge goal, for example, Woobens Pacius dropped back into midfield to pick off a pass, before playing the ball to Chris Nanco. After the pair exchanged passes the ball was very quickly at the edge of the York United penalty area, where Nanco’s cross would be headed by Kyle Bekker to Tristan Borges, who gave his side the lead.

A small error was punished, and Forge were off to the races, and would be rewarded with a goal.

On York’s goal, Diyaeddine Abzi was first to a loose ball at the edge of his penalty area before charging up the pitch with it as several Forge players were caught out of position in York’s half. As Abzi passed it across the field to Michael Petrasso, The Nine Stripes charged forward with five players all making the run in transition. Petrasso found Abzi, who fired home an equalizer.

This match featured two of the most lethal counter-attacking sides in the league, and it was on full display.

“It opened up… they scored and we ended up tying it up with a counter, and then we concede just before halftime,” said York United head coach Jimmy Brennan after the match. “You’ve got to make tactical changes to get yourselves going a little bit and create more opportunities. Then the game really opened up on both ends.

“We had a number of chances, they did as well. It’s two teams that were fighting for three points today.”

Jimmy Brennan handed a first start to midfielder Sebastián Gutiérrez on Saturday, after the Colombian midfielder was finally able to join the club this month after signing with The Nine Stripes in the offseason.

Still working his way up to match fitness after being limited to substitute appearances in the past few matches, Gutiérrez played 45 minutes before he was replaced by Alvaro Rivero at halftime. He made a tackle and an interception on the defensive side of things, also winning three fouls and taking one shot.

With the game winding down, Brennan also handed a debut to defender Matteo Campagna, who joined the club on loan from the Vancouver Whitecaps this week. Replacing Max Ferrari in the 81st minute, Campagna didn’t have a huge impact on the game, but completed both of his attempted passes, and blocked a shot from a Forge attacker.

“I thought Matteo came on and was very good,” said Brennan after the match. “For his first game, he came in and we changed it to a back three and pushed ourselves forward a little bit more, and I thought he did alright. He’s a young kid, he’s only 17 now, so he held his own.

“And I thought Seb was very good, we just need to get him going a little more where he can last ninety minutes, but I thought at times on the ball he was very good. At times he did lose it, because I think he’s still adjusting to the speed of play and just how quick the league is. It was nice to get him out there and get a start today.”

Thrust into the lineup as regular starting striker Mo Babouli continues to miss out through injury, Woobens Pacius has been very impressive in his last two matches for Forge.

Pacius’ positioning and movement off the ball has been one of his strengths since joining Forge, and he is consistently getting himself into promising areas. When you’re in the right place at the right time, goals will eventually come, and Pacius now has three in two matches.

He might’ve had a second goal on Saturday, as he broke through the opposing defence in the second half of the match, but York defender Dominick Zator never gave up on the play and was able to come up with an important block.

“He’s not only been brilliant in the finishing end, but also in his distribution and his hold up play. I thought he was excellent today, bringing different things in. He’s showing a different array to his game, and he’s growing day-by-day.”

Forge FC’s Tristan Borges scored the opening goal and assisted Forge’s second with a cross into the box in an impressive attacking display.

York are next in action on Wednesday, September 1 (7 pm ET), as they travel to the capital to take on Atlético Ottawa. Forge head further east to Nova Scotia for a 2020 CPL Final rematch against HFX Wanderers on Friday, September 3 (6 pm AT/ 5 pm ET) at Wanderers Grounds. Watch all matches live on OneSoccer.
© 2021
Canadian Premier League
Read our privacy policy.