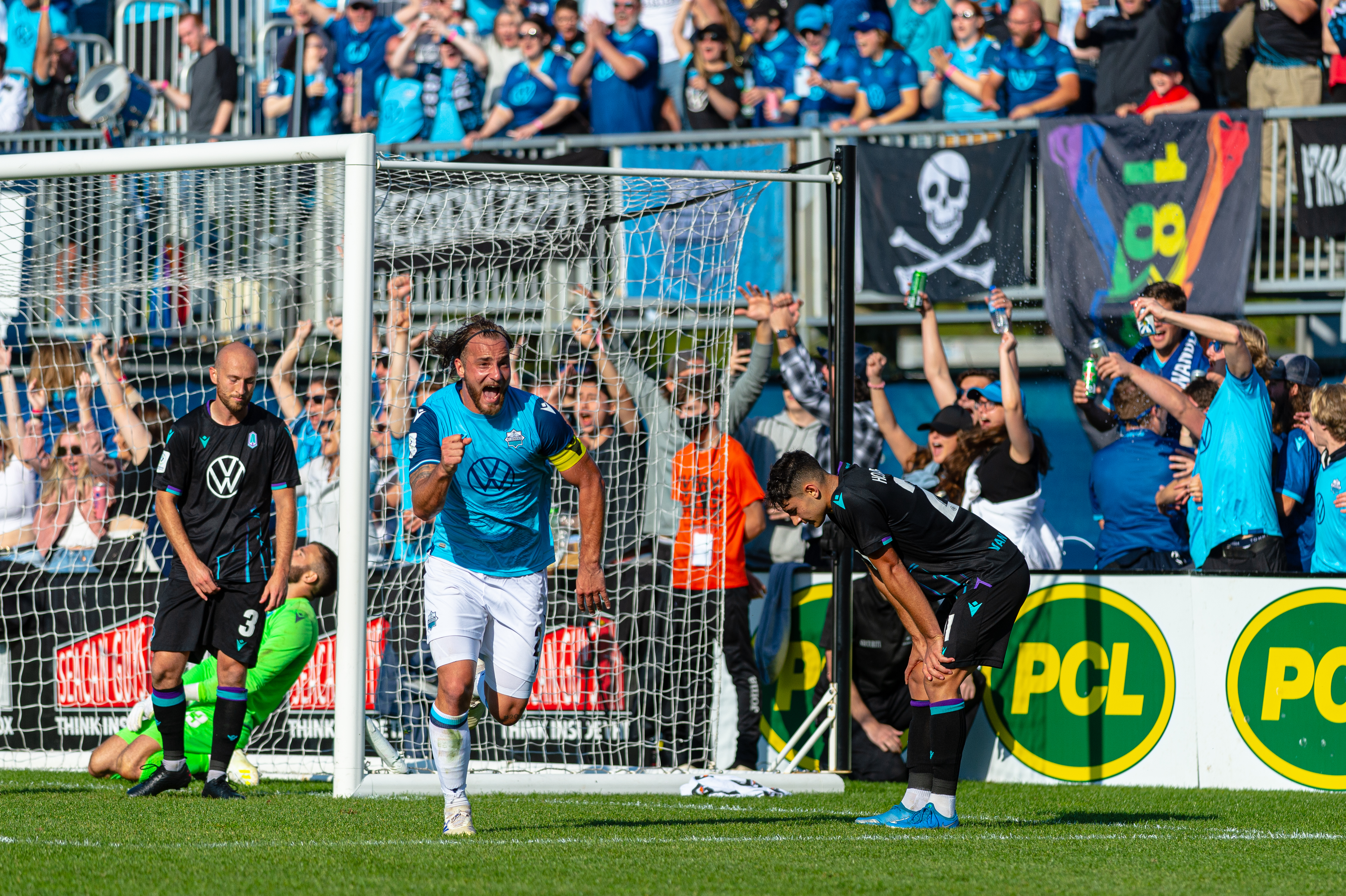 HFX Wanderers FC pulled off an important and impressive result against league-leaders Pacific FC on Thanksgiving Monday to reinvigorate their playoff hopes. Abou Samake’s own goal, while uninspiring, doesn’t tell the whole story for a Halifax team that out-played the Tridents with an aggressive hard-nosed pressing style that brought a packed Wanderers Grounds to their feet repeatedly.

With the result, the Wanderers leapfrog York United for the fourth and final playoff spot taking a one-point advantage while York remains with a game at hand.

Halifax back in playoff spots with PFC win

The better team for the bulk of Monday’s holiday affair, Halifax walk away with a massive three points and now sit a point ahead of York United for the CPL’s fourth and final playoff spot fifth five matches remaining.

Halifax’s performance was special just for the fact they got points off the league leaders and without their best player (more on that later). It felt, especially with a brilliant home crowd in tow, like a potential turning point in the season – especially on the heels of a disappointing loss to Forge at midweek.

“Nothing’s changed, has it,” head coach Stephen Hart said of his playoff aspirations. “We said a long time ago that every game must be played like a final. At some point, we have to steal some points on the road.”

Up next is a trip out west to face fellow contenders Cavalry FC at Spruce Meadows as Halifax continues its mini-tour of the top three clubs in the CPL standings.

The Wanderers looked to stifle Pacific’s league-leading attack from the midfield, pressing with purpose throughout Monday’s contest. Pacific, it has to be said, didn’t looked comfortable in the aforementioned swarm and rarely pierced through it with attacks going out to the touchline often.

You couldn’t deny Halifax struck a proper balance in midfield too – starting with a traditional pivot of Pierre Lamothe and Jérémy Gagnon-Laparé in midfield. Gagnon-Laparé, Halifax’s utility man, looked at home in midfield as the hammer to Lamothe’s knife, winning possession and allowing his fellow Quebecer (and roomate) to maintain and rotate possession.

“Jeremy was complemented by Pierre in just how crowded that part of the pitch was,” Hart said. “We had to go for this one – high press, see what happens. We thought we could get a goal in that first half and those guys were a big part of it.”

With Mamadi Camara and Sam Salter ahead of them, the attacking group was aggressive – and without golden boot leader Joao Morelli, who was out due to fitness concerns, they performed well.

“The press, which we’ve been struggling with over the past few weeks, was much better with that energy, understanding and organization,” Gagnon-Laparé said.

The Halifax Wanderers not only held CPL’s top attack to no goals, but they also prevented them from recording a shot on target for just the third time this season.

It’s a hard-nosed group that, if Gagnon-Laparé isn’t forced to move back to the left side of the defence to fill a spot left vacant by injury, you could see clogging up the middle against the CPL’s best late into November – if Halifax can get that far.

Hunter vs. Hunted: Kah blasts PFC’s performance after the match

Pacific looked like they had just finished their Thanksgiving supper on Monday as Pa-Modou Kah spared no criticism for his team after the match – the first time this season where they lost back-to-back matches.

“I cannot curse, can I?” Kah started his post-match media availability when asked his team had performed. “We were second to everything today. Not good enough. Not to Pacific standard.

“It was one of our worst performances as a collective group.”

The loss also saw PFC slip further deeper into the race for first in the playoffs. Now two points ahead of Forge FC but with three more matches played, the Tridents stand with much more to earn if they want top spot and home field advantage in next month’s playoffs.

“You never want to be the hunted one – because they’re always being chased. When you’re the hunter you’re always on the front foot,” Kah concluded.

Pacific goalkeeper Callum Irving, who made several key claims and saves through the 90 minutes, saw something similar to Kah as the team heads home to face Valour FC on Saturday.

“You saw one team out there today that had a reason for playing and a reason to push themselves and another team that looked a bit lost and lacked any motivation,” Irving said. “Credit to Halifax – from the get-go they were putting pressure on us and they had a fight in a belief. If you don’t match that you’re not going to win a game, plain and simple.”

Playing as a subdued midfielder, Lamothe was exactly what Halifax’s system required from a no. eight; leading the team in possession gained (11) while attempting the most duels (15) and keeping an energetic pace in midfield.

Both clubs will take a midweek breather before returning to action this weekend. Pacific will make the +4,000km trip back to Vancouver Island before hosting Valour FC on Saturday (6:00pm ET/3:00pm PT) in the ComeOn! Match of the Week. Halifax, meanwhile, will head on their first western road swing of the season when they visit Cavalry FC Sunday (4pm ET/2pm MT). Watch all matches live on OneSoccer.