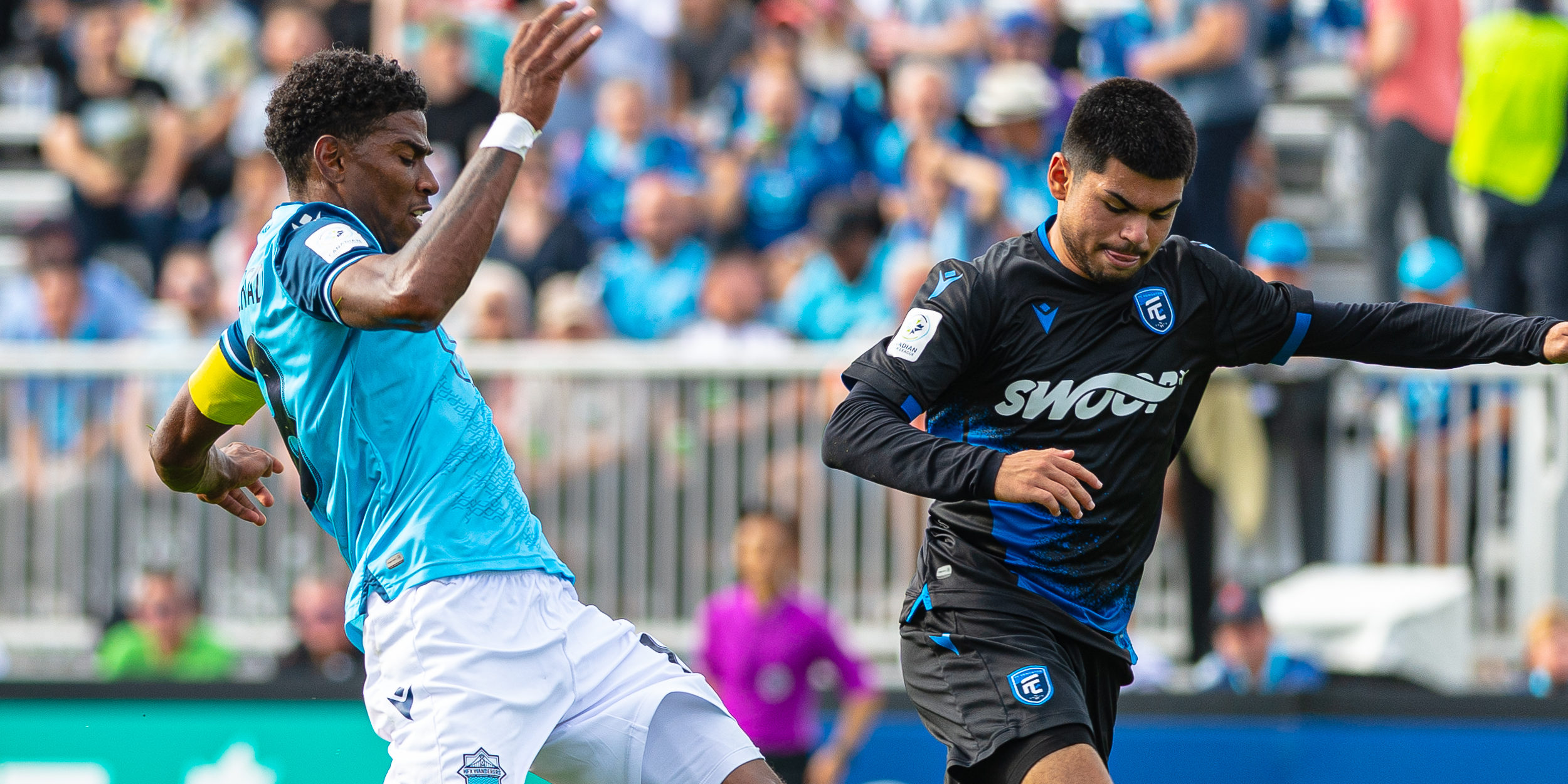 HFX Wanderers drew a little closer to the top four on Saturday afternoon at the Wanderers Grounds, as Joao Morelli’s 12th goal of the CPL season was all they needed to secure a very narrow 1-0 win over FC Edmonton. Although the Eddies outshot their opponents 18-14 on the day, they were never quite able to crack their opponent to find an equalizer as the Wanderers defended enough to pick up all three points.

With the win, HFX moved up into fifth place — just one point back of York United in fourth, as it stands.

Wanderers break through with passes over top of Eddies’ press

FC Edmonton did very well in this game to put the Wanderers players under pressure and block off passing lanes, as they have done in other recent games. The modified front three — Azriel Gonzalez and Tobias Warschewski pushing up from the edges of midfield to flank Easton Ongaro in the first half — was constantly looking to run at the Wanderers and take away their ability to play forward passes along the ground.

Having no luck trying to work the ball through the middle, the Wanderers opted for two other options: playing with speed along the wings, and bypassing the press with lobbed passes over the top. The latter is how they scored their first-half goal, with Alex Marshall’s ball finding Stefan Karajovanovic in the box before Joao Morelli scored in the second phase.

All of the Wanderers’ chances in the second half (of which there were a good handful, despite Edmonton playing on the front foot) came on the counter-attack, but they were in a very different phase of the game at that point and no longer needed to play through the press.

HFX were very much in control of the match in the first 45 minutes, but fatigue definitely reared its head for them in the later stages with many players having put in a lot of hard minutes recently (including on Wednesday against CF Montreal in the Canadian Championship). Of course, that wasn’t necessarily unexpected, but Stephen Hart might have liked to see his team slow the game down a little more and not get pinned back as much as they did. Hart pointed out postmatch that his side handed the Eddies a few too many set-piece opportunities with free kicks and corners that allowed them to get a bit of a foothold in the contest.

“In the first half I thought we were well under control, didn’t really get troubled much,” Hart offered. “In the second half, I thought we started to move the ball too slow, and in the wrong areas of the pitch, and they started to get into the game with a number of corners but we defended well. The game basically turned to a second ball game, where they became more direct — and they’re good at it because they’re big and they’re strong — and when that happens they started to get more corners again.”

Though they were well able to win the ball, the Eddies struggled to make good use of their opportunities in transition. They weren’t often able to get the ball forward quickly enough to put the Wanderers on the back foot, with some players taking perhaps a little too long on the ball and allowing the defenders to set themselves. Most of Edmonton’s best opportunities in the first frame were individual efforts from Fraser Aird, who was able to cut in from the right wing a few times and attempt long-range shots — to no avail, though.

Edmonton’s attacks often came from similar areas, and they played 12 crosses in from open play just looking to find a striker in the box; as a result, they were somewhat predictable in the buildup and weren’t able to break through. They had a litany of shots, but the seven in the first half were often from distance and handled capably by the Wanderers defenders or goalkeeper Kieran Baskett.

The second half was more lively from the Eddies, who had an array of great chances, but overall they were perhaps missing the bite they needed to put one in the net. Head coach Alan Koch indicated postmatch that he was disappointed not to have gotten something out of this game, since he felt they had a good plan for playing against the Wanderers specifically that didn’t quite get them the goal they needed.

“Halifax played the way we thought and knew they were going to play, and I don’t think we managed that very well,” Koch said. “We showed a lack of maturity in our performance today; we got ourselves into a hole and then you’re trying to dig yourself out of it, but we should never put ourselves in that hole in the first place. And when I say maturity, I mean football maturity, how to manage situations when players and teams play in a certain way. We need to be more comfortable managing situations like that.”

It was certainly a surprise to see Easton Ongaro come out of this match at halftime, but there’s no denying that Edmonton looked much better in this game after Jeannot Esua joined the fray. They appeared to have a little more urgency in their transition game, and they spent much more time on the front foot.

With Esua coming in to play on the right flank, the Eddies shifted to more of a 4-4-2 formation with Azriel Gonzalez coming from the left to play closer to Tobias Warschewski up front. As a result, they were able to find some new spaces with the ball, as Esua and Paris Gee both getting very involved from the wide areas to try and run directly at the HFX fullbacks.

Alan Koch explained postmatch that the swap was indeed a tactical choice rather than anything injury-related, as he was hoping to get a little more pace on the pitch to help them get behind the Wanderers’ back four — which the Eddies did manage to do; 11 of their 18 shots came in the second half as Edmonton imposed themselves quite well, even though the final ball eluded them.

“We wanted to try and get in behind them a little bit more,” Koch explained. “Azriel has pace, Jeannot has pace; it had nothing to do with Easton’s performance and we spoke to him about that at halftime, it was a tactical adjustment. I think to be quite frank the tactical adjustment worked, because we spent the majority of the second half in their half, but it didn’t give us the result that we obviously wanted.”

Koch was quick to confirm that Ongaro is fully fit; he explained that Ongaro coming out of the game was just a necessary sacrifice to make the tactical shift he wanted.

It’s not often an attacker gets so much praise for his defensive work, but Karajovanovic saved the result for HFX on at least two occasions with goal-line blocks. He had a key role in the Wanderers’ opening goal as well, managing to sneak in behind the Edmonton defence, and through all 90 minutes he worked tirelessly off the ball to take initiative in pressing.

The Wanderers will remain at home for a midweek match, as Atlético Ottawa will pay a visit to the Wanderers Grounds this Wednesday, September 29 (5:30 pm ET/6:30 pm AT). Edmonton will be back at home as well on Wednesday, as they prepare to host Alberta rivals Cavalry FC (10 pm ET/8 pm MT). Watch all matches live on OneSoccer.