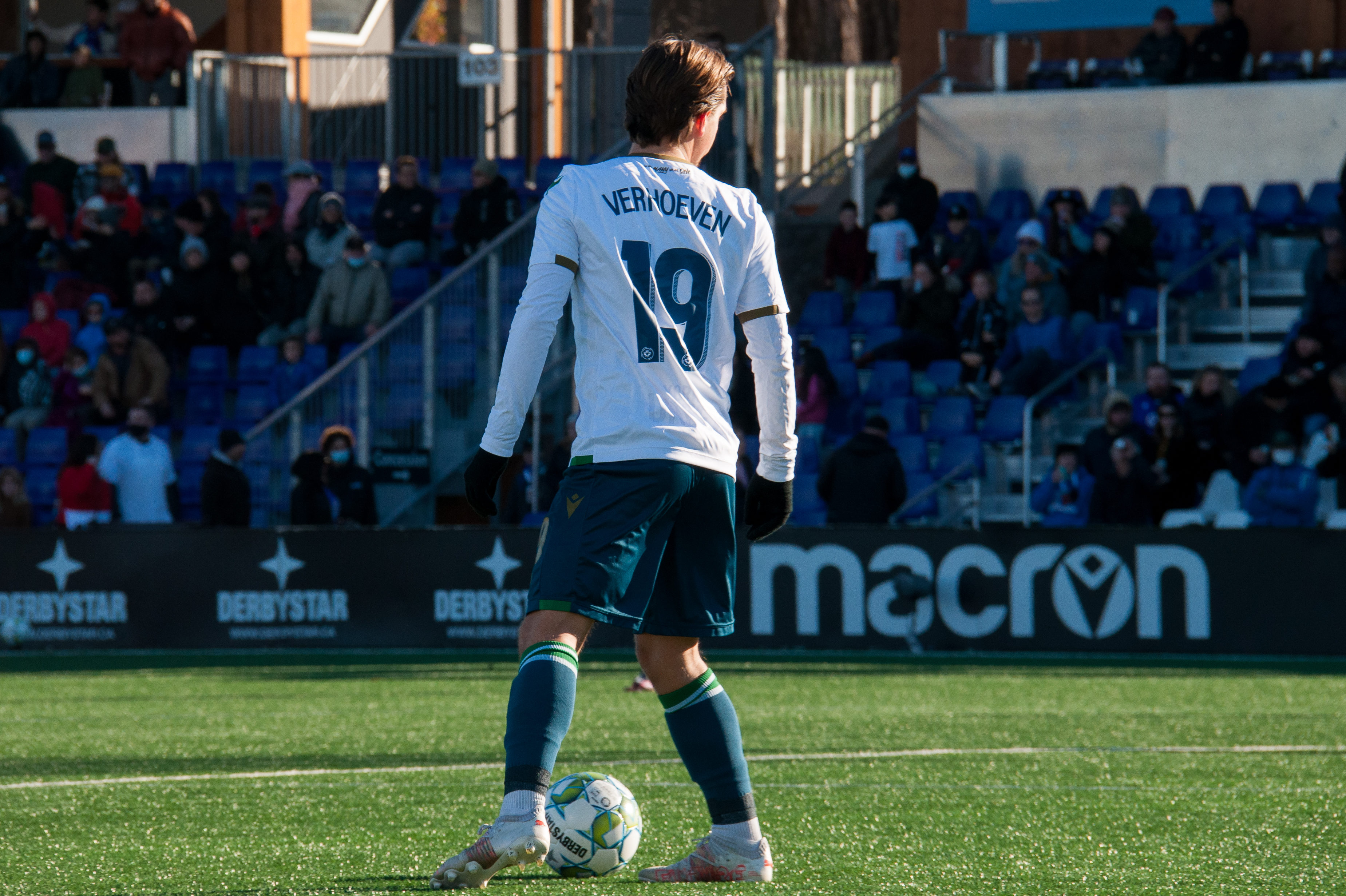 York United went to Starlight Stadium in search of important points on Saturday, and returned with three of them — beating Pacific FC 2-1 and climbing back into the top four. Nathan Ingham stopped a Lukas MacNaughton penalty in the first half, but The Tridents took the lead after the break on a header from Terran Campbell. Lowell Wright scored a goal and assisted another off the bench, earning The Nine Stripes a comeback road victory, and a temporary grasp on the final playoff spot.

Hours after Valour FC took over fourth place in the table with a 4-2 win over Cavalry FC at ATCO Field, it was York United’s turn to hold that position with their win in the final match of Saturday’s CPL triple-header.

HFX Wanderers entered the day in fourth, but after losing 4-1 to Forge FC, and Valour’s win on the road as well, the pressure was on York       to pick up a result, and they delivered.

Jimmy Brennan’s team dodged a bullet, with Nathan Ingham making a huge stop to deny Lukas MacNaughton’s penalty in the first half, and overcame an early second half deficit — with Julian Ulbricht and Lowell Wright scoring to cancel out Terran Campbell’s opener.

The win leaves York on 36 points through 26 matches, two points ahead of HFX and Valour, who both have 34 through 27 matches. That game in hand could be important for York, although they have to play Forge FC twice at home in those final two regular season matches.

Valour travel to take on FC Edmonton in their final match, while HFX host Atletico Ottawa as this tight playoff race goes down to the wire.

“We needed that win today,” said Brennan after the match. “We’ve had quite a few draws, we knew we needed to dig deep today to get something out of this game. The guys’ effort today was fantastic, we stuck to the gameplan, and they were rewarded with the two goals. It’s the three points we needed to get ourselves in the playoffs.”

Referee Alain Ruch had a busy night, handing out eight bookings in Saturday’s match, five to Pacific and three to York United. Two of them in particular will affect Pa-Modou Kah’s planning for Pacific’s next few matches.

Lukas MacNaughton picked up his eighth yellow card of the season, booked for simulation in the 71st minute — a controversial call as Pacific centre-back appeared to make slight contact with his York counterpart Dominick Zator on the way down.

With his eighth booking comes a two-game suspension, meaning MacNaughton will miss Pacific’s final regular season match against Cavalry, and first playoff game against a to-be-decided opponent. He’d be eligible to return for the final, should Pacific get that far.

Gianni Dos Santos was also given a card late in the game, but his was a straight red for alleged violent conduct. Dos Santos, seemingly frustrated, fouled Max Ferrari, and appeared to follow through by kicking the Nine Stripes left back. He also has a multi-game ban pending  at the business end of the season as a result.

Gianni Dos Santos is SENT OFF, and Iain Hume? He's not having it.

Brennan gets his substitutions Wright, with Lowell the hero for York

York head coach Jimmy Brennan made the decision to bring  Lowell Wright off the bench to replace Jordan Faria in the 55th minute, and the talented young forward made an immediate impact.

Just 22 seconds after coming on, Wright pushed his way past a defender, made his way to the goal line, and played a low pass into a dangerous area at the near post. Julian Ulbricht was there to poke it home, and York were back level in the 56th minute.

Not done there, Wright turned and fired a rocket of a shot into the top right corner of the goal, giving Pacific debutant Isaac Boehmer no chance to keep it out, despite his best effort.

The 18-year-old is up to five league goals on the year, tied for second on the team leaderboard with Diyaeddine Abzi, and one back of Alvaro Rivero’s six. He’s also contributed three assists in his 24 league appearances thus far in 2021.

“I thought Lowell was great when he came on,” said Brennan. “He’s such a big body, he’s got an eye for goal, he can hold up play, he works. His work ethic’s getting better and better every week. I was happy for him to get his goal.”

“Definitely happy with the performance that I put up, but more happy that the team got the three points today,” added Wright.

The young attacker scored a goal and set up another in an impressive substitute appearance, earning his team all three points.