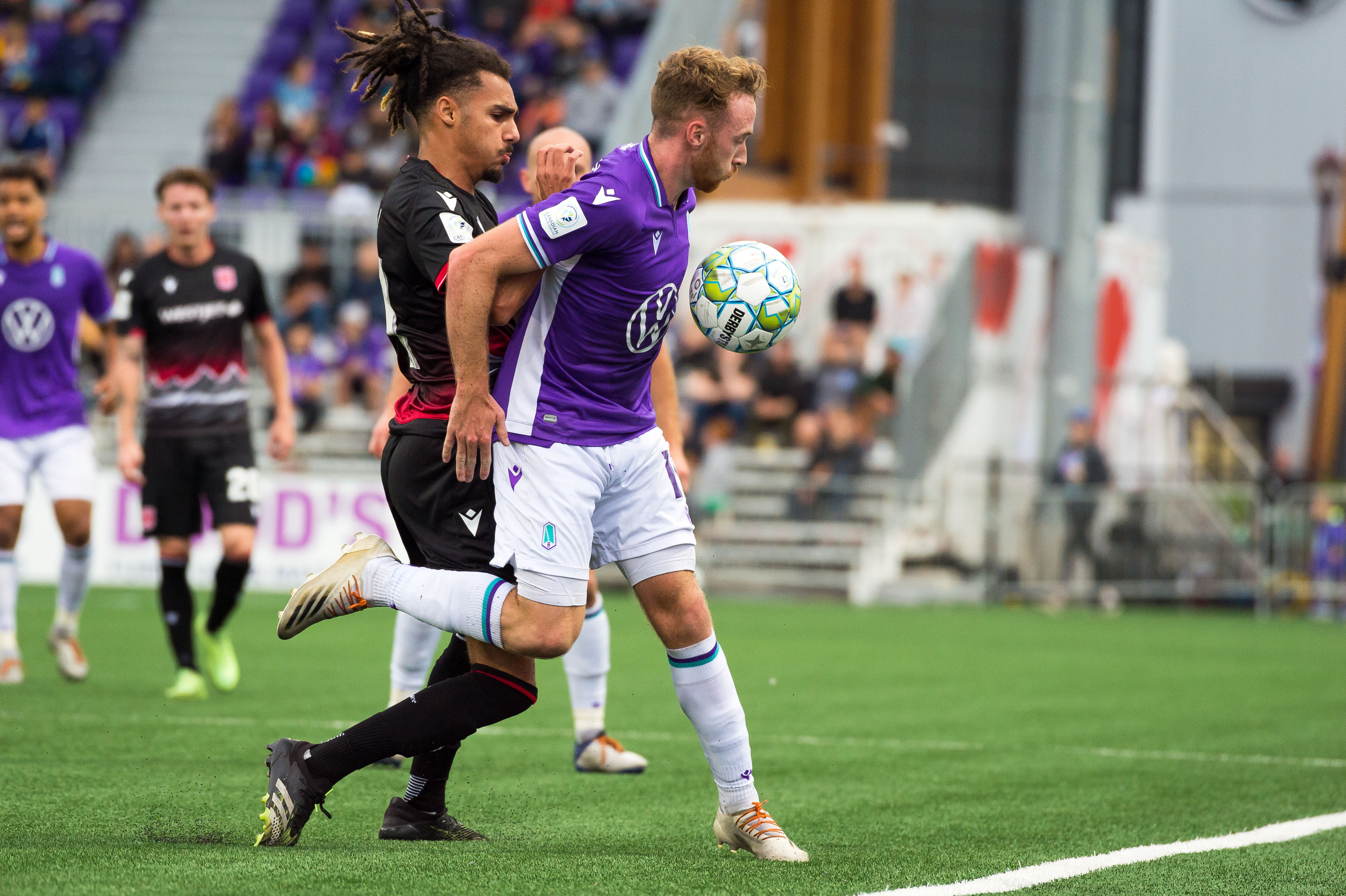 A first half brace from Joe Mason was enough for his Cavalry FC side to leave Starlight Stadium with all three points and a 2-1 victory over first-place Pacific FC.

Mason opened the scoring for the visitors in the 23rd minute, rounding Pacific goalkeeper Callum Irving before firing the first goal of the match into a now-empty net. He’d make it 2-0 six minutes later, finishing off a counter-attack with a chipped redirection at the near post after a low cross in from Sergio Camargo on the right wing.

Pacific pulled one back from the penalty spot in the 83rd minute as Terran Campbell beat Marco Carducci from 12 yards out, but despite a late rush were unable to find an equalizer.

Pacific rotate the side, looking to keep everyone fresh

Reaching the halfway point in the season with their 14th match of the campaign, Pacific FC head coach Pa-Modou Kah opted to rotate the squad a bit to ease some tired legs. Most notably, star attacker Marco Bustos and defensive ironman Lukas MacNaughton were out of the matchday eighteen completely.

MacNaughton had played every minute of the season up to this point as a key player for Kah in central defence. Pacific are tied with a league-leading seven clean sheets on the year with MacNaughton in the squad, and he has also completed 997 passes in 2021, over 130 more than the next-closest player in the CPL — Abdoulaye Samake, who has been the other half of Pacific’s centre-back pairing for most of the season thus far.

Bustos, meanwhile shares the league lead in goals (five) and is alone at the top of the leaderboard with four assists as well. He’s been one of the best players in the league, but didn’t see the pitch on Friday night.

“As coaches you have to make choices, and we know that we have a squad,” said Kah after the match. “We were able to give Lukas and Bustos a rest, and they need it.

“One result doesn’t change our confidence in this group, and our belief of who we are and how we play. At the end of the day we’re still on top so we’ve got to move on and learn from this game.”

While Kah didn’t mention it specifically after the match, one eye was also surely on a huge match against local rivals Vancouver Whitecaps midweek in the Canadian Championship, and part of the reason why he rested the duo. It is one of the biggest matches his side have ever played, and has been circled on the calendars of many since the fixture was announced.

Keeping two of his most important players healthy ahead of that match, and giving them a deserved night off halfway through the season, may prove to be beneficial down the line in what has been a busy schedule for The Tridents.

Terran Campbell had a solid showing on the right wing in place of Bustos, while Robert Boskovic would last just 30 minutes at centre-back before he was replaced by Thomas Meilleur-Giguère in a tactical switch after conceding two quick goals.

After coming to the Canadian Premier League with a high pedigree, having spent most of his career thus far in the top three flights in England, Joe Mason was expected to do big things in Canada — and showed off some of his attacking prowess on Friday night.

Mason scored both of Cavalry’s goals in the 2-1 victory, rounding Callum Irving and sliding the ball home for the opener and redirecting a low cross into the net to double the lead a few minutes later.

It was the second match in a row that Mason had found the back of the net, having also scored the winning goal against FC Edmonton in the Canadian Championship last weekend — and is now up to four goals in seven matches in all competitions in total.

Mason’s movement off the ball is what makes him such a threat for opposition defenders. He makes sneaky runs in the box that, when undetected, put him in brilliant positions to score. His second goal on Friday is a good example of that — Mason delayed his run to throw off the defenders before sprinting between them to meet the ball at the near post and chip a shot from close-range over Callum Irving to double the lead.

Even if he doesn’t always receive the ball, those dangerous runs can drag people out of position, opening up opportunities for teammates instead. He’s quickly developed a good chemistry with his teammates, and it’s starting to pay off for Cavalry.

“Sergio [Camargo] is a great player, he’s very technical and he sees my runs, which is really important,” Mason said after the match. “For the second goal, he’s waited for me to make my run to the front post and passed it, when a lot of players in that position would’ve just whipped it across the box. He’s a clever player and I really enjoy playing with him.”

Meilleur-Giguère and Norman Jr thrive under pressure in either backline

There were strong performances from young Canadian centre-backs at either end of the pitch on Friday night, as Thomas Meilleur-Giguère and David Norman Jr. impressed for Pacific and Cavalry, respectively.

With Cavalry dominating the first 30 minutes of the match, scoring twice, Pacific FC shuffled up their backline, bringing on Thomas Meilleur-Giguère for Robert Boskovic in a first-half tactical substitution. “TMG”, as some call him, shored up his side’s defence for the remainder of the match, making four tackles, four clearances and two interceptions in a dominant defensive display.

Cavalry’s attacking output was reduced as Meilleur-Giguère came in and made an immediate impact, both in the air and on the ground.

“He was immense, I think the game changed when he came in,” said Pa-Modou Kah after the match. “We didn’t want to play him, but at times you have to make bold changes, and I think that was one of the bold changes that was needed because of his voice, and his commitment, his passion.”

Norman Jr, who has been transitioning into a centre-back at times this year instead of always in his natural defensive midfield role, impressed at the other end of the pitch, starting alongside Daan Klomp in a back four for the visitors. He completed a team-leading 37 passes on the night, also making two clearances, two interceptions and one block in another strong showing for the 23-year-old.

He also came close to scoring in between Mason’s goals, firing a shot off the crossbar in the 26th minute.

“Rock-solid,” said Wheeldon Jr of Norman Jr’s performance on Friday. “You know when you’re playing at Starlight Stadium against the team that’s top, they’re going to have waves (of attacks), and in that second half it was wave after wave. If you’ve got the lead you have to shut up shop, and I thought we did that.

“He was solid again today, he’s defensively reading the game very, very well, he’s maturing every time and it’s great for us.”

Norman Jr started for Canada at centre-back during the 2020 CONCACAF Men’s Olympic Qualifying Championship earlier this year, partly due to Meilleur-Giguère being forced out of the squad for medical reasons, and has looked more than comfortable in the role since.

Cavalry’s star striker scored twice in ten minutes, making a pair of great runs to create space and win the game for his side.

Pacific FC will be at home again on Thursday, August 26th (7 pm PT/ 10 pm ET) for what may be the biggest match in their short history thus far — a Canadian Championship tie against their local MLS rivals, the Vancouver Whitecaps. The winner of that plays Cavalry in the next round. The Cavs, meanwhile, return to ATCO Field for a CPL game against Alberta rival FC Edmonton on Sunday, August 29 (2 pm MT/ 4 pm ET).

Watch all matches live on OneSoccer.