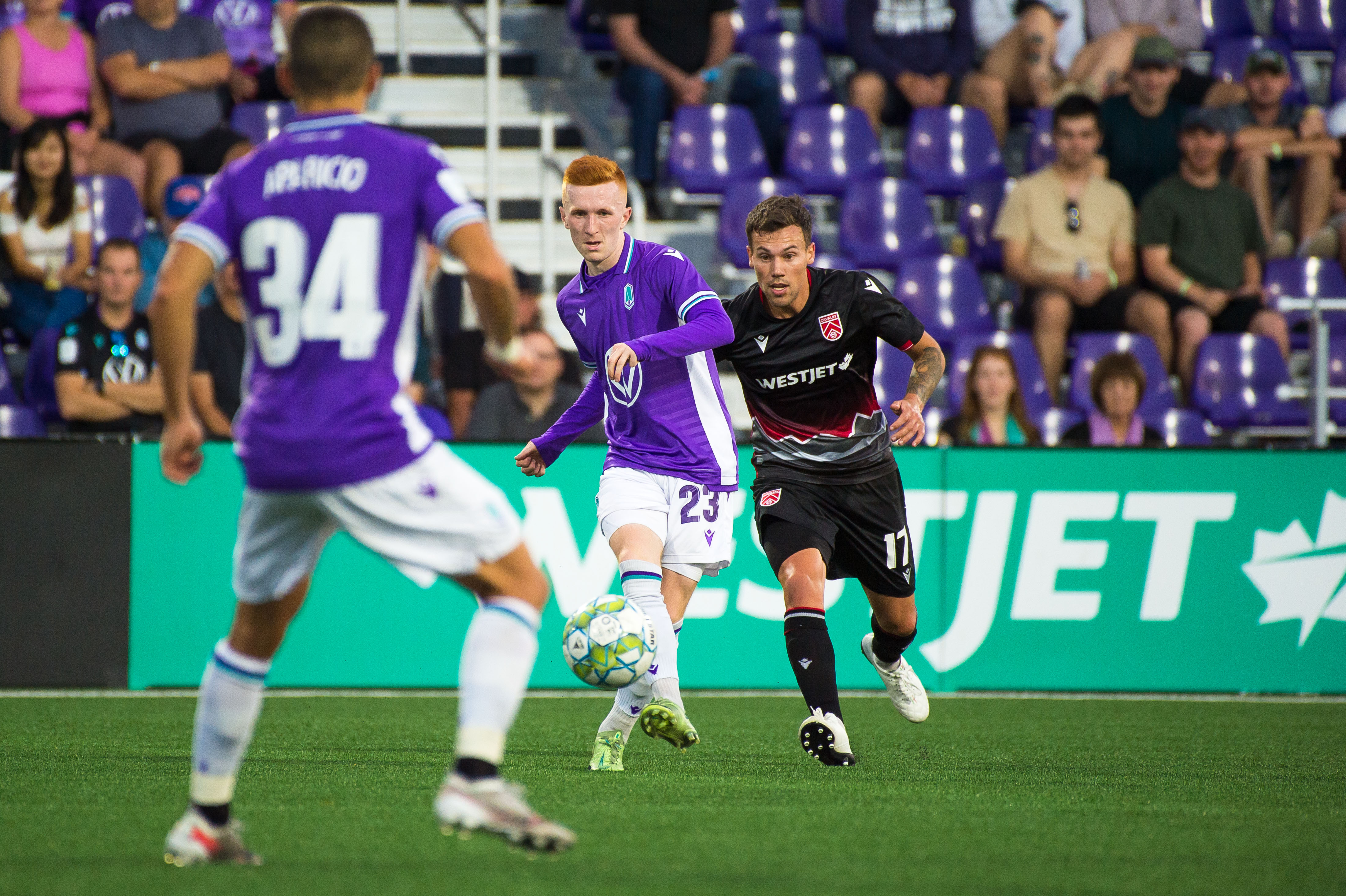 Pacific FC gave themselves a three point cushion at the top of the Canadian Premier League standings on Thursday night, beating Cavalry FC 3-1 at Starlight Stadium.

Sergio Camargo gave the visiting side the lead just after the half-hour mark, beating Callum Irving with an impressive shot from the edge of the box. Terran Campbell equalized for Pacific in stoppage time at the end of the first half, with an overhead kick from close range, sending the teams into halftime tied at 1-1.

Ollie Bassett scored what would be the winning goal in the 66th minute, stealing the ball from Elliot Simmons in the Cavalry penalty area and firing it into the bottom right corner, but it was Manny Aparicio’s 89th minute strike that was the best of the bunch. Cutting in from the left wing and opening up space for him to get a shot away, Aparicio fired a shot into the top right corner, off the post and in.

It was the cherry on top of a strong performance from Pa-Modou Kah’s side in this top-of-the-table battle.

Ollie Bassett controlled the midfield in return to starting lineup

After being out of the starting lineup for just over a month with an injury, Ollie Bassett returned to Pa-Modou Kah’s lineup on Thursday night.

There were no signs of rust, as the 23-year-old midfielder was a focal point of the team’s attack, and picked up his second goal of the season. Bassett stripped the ball from Elliot Simmons in the Cavalry 18-yard-box, before firing the ball past Marco Carducci to give Pacific a 2-1 lead, serving as the winning goal.

In his 78 minute shift, Bassett also completed 32 of his 37 attempted passes (86.5%), and also added a key pass in an impressive performance.

He is composed on the ball, and has an eye for a pass — and slots perfectly into Pacific’s starting lineup alongside Manny Aparicio in the middle of the park.

“We thought him in there today would keep us the ball, and he’s also a creator, all he needed was one chance,” said Pacific FC head coach Pa-Modou Kah after the match. “I think in the first half he was a bit passive to what he’s capable of, but in the second half he got even better and he rewarded himself with a goal.”

“It’s been a while since I last played a game, I think the last game I started was Edmonton at home (on August 7th),” said Bassett after the match. “It was nice to be back out there — I don’t try and put too much pressure on myself, I just go out and try to play my normal game. It’s always nice to get a goal as well.”

There were uncharacteristic mistakes made in this match from Cavalry that saw the visitors beat themselves at time.

Simmons’ giveaway on Bassett’s goal, for example, is probably the mistake that cost them the most, but things like errant passes or long shots that didn’t hit the target were the story of this match.

Tommy Wheeldon Jr. put it best after the match, saying that “the best team won”, a fair analysis as Pacific were clinical on the night, and Cavalry weren’t.

Sergio Camargo scored his side’s lone goal, with a brilliant effort from the edge of the penalty area that beat a diving Callum Irving, but otherwise the side struggled to create a ton of goalscoring opportunities. They had three attempts on target — the goal, a header from a set piece that Irving caught comfortably, and a Jose Escalante shot from distance that didn’t trouble the Pacific goalie.

Camargo was frustrated in his postgame press conference, saying that this was his side’s “worst performance of the year”, and that his side was “lucky to get that goal” on the counter-attack.

While perhaps a bit overly harsh on themselves, there was certainly a sense that Cavalry let a chance to get a win over the other top-of-the-table side slip through their fingers, and by making the mistakes they usually don’t make.

“Everything was missing tonight,” Camargo said. “They were the better team from start to finish, we could’ve squeaked out a 2-2 draw, but we would’ve been lucky to do that. We had some chances at the end but we were not clinical. They controlled it, we were sloppy with the ball, unintelligent out of possession.

“We had no game management, to allow a goal that close to halftime is shocking, we can’t do that.”

Those are some strong words from the Cavs midfielder, and how the team reacts to the performance will be the real test. Cavalry are usually so good on the ball, and defending in particular has been a strength for them in 2021, so it may just be an off-night, but they won’t want to let any patterns develop over the coming matches.

Now up to seven goals on the season in all competitions, six in the CPL, Terran Campbell is in great form for Pacific FC.

With Marco Bustos still out of the squad through injury, Campbell has been deployed in Bustos’ attacking role on the right flank, and has ran with his opportunity to get several starts in a row. His six CPL goals sees him tied with Alejandro Diaz for the team lead, and keeps him in a four-way tie for second place in the Golden Boot race.

He seems to be playing with a lot of confidence at the moment, and was again in the right place at the right time on Thursday. After Diaz’ initial header on goal from a cross into the box was stopped, Campbell scored the rebound — performing an overhead kick from a few yards out to equalize in first half stoppage time.

A poacher for Pacific in the first few CPL seasons, Campbell seems to always know where to position himself to set up goalscoring opportunities, and lately — when given a chance to get a shot away — he’s often put it in the back of the net. Pa-Modou Kah spoke after the match about how hard Campbell works in training, suggesting that the recent goals are a reward for his efforts.

“We know what we have in T, know what he’s capable of, and he’s been showing it,” Kah said after the match about Campbell. “Sometimes that’s the funny side of football, all of a sudden they go on a run, and he’s on a bit of a tear now, which is fantastic for us. He’s peaking at the right moment, and his confidence is top notch, his work rate is unbelievable — every single day he’s coming to work to get better.”

The Pacific FC midfielder was everywhere on the pitch on Thursday, and earned his team three points with his second half goal.

Pacific are next in action on Tuesday, September 14 against FC Edmonton at Clarke Field (7:30 pm MT/ 6:30 pm PT). Cavalry have a few extra days off, next playing against Valour on Saturday, September 18 at IG Field (3:00 pm CT/ 2:00 pm MT). Watch all matches live on OneSoccer.