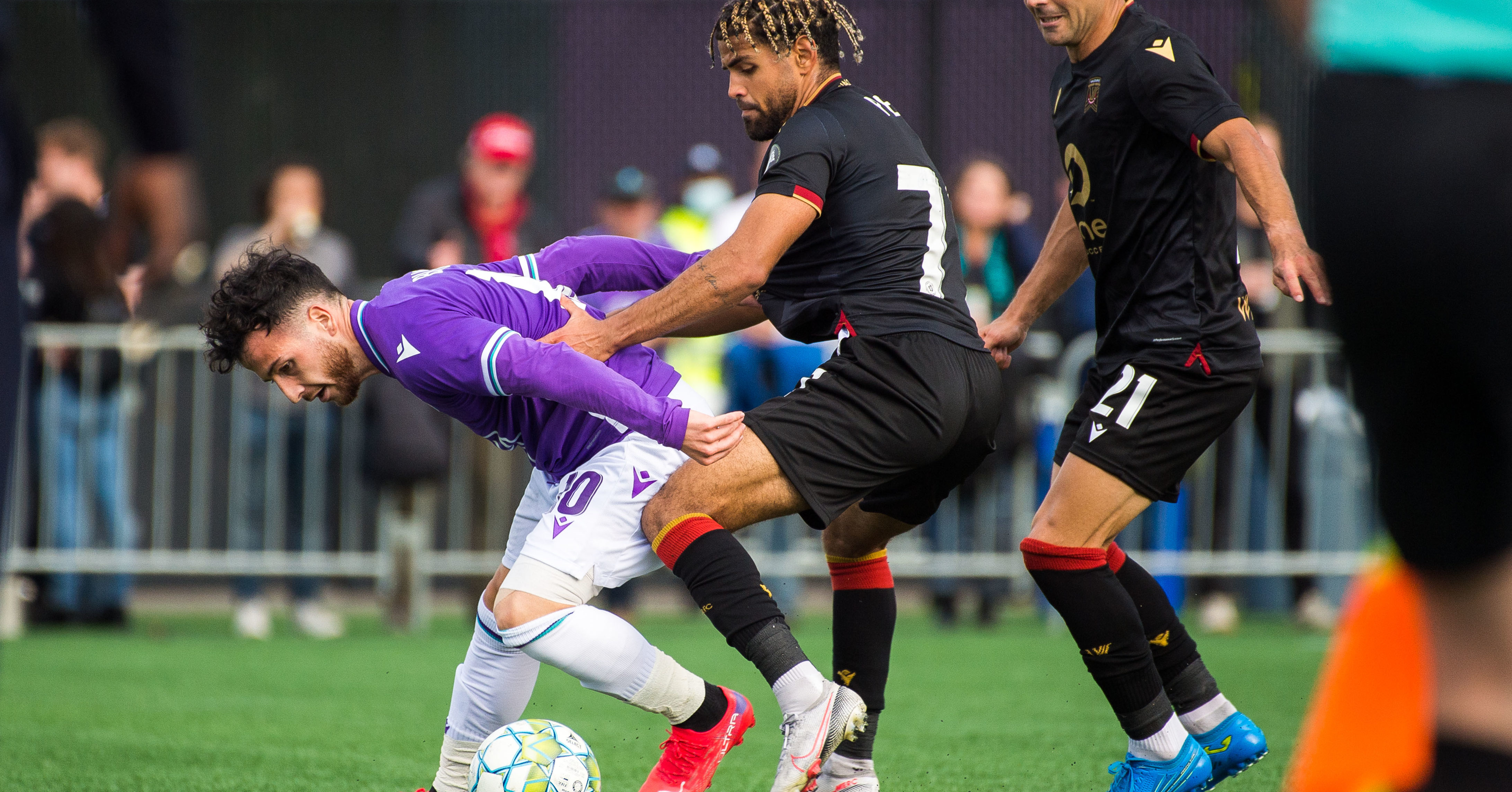 It was a welcome return home for Pacific FC as the hosts put on a dominant display against Valour FC on Saturday. First-half goals from Josh Heard and Terran Campbell set Pacific up 2-1 at the break with Valour’s lone goal coming through Daryl Fordyce. In the second half, Campbell secured a brace and while William Akio’s bullet strike made things 3-2, the hosts held on for three vital points.

As one of the most offensive teams in the Canadian Premier League, Pacific FC’s attack always remains a threat for any opponent. But after suffering back-to-back losses, coach Pa-Modou Kah’s side finally seem to be back to their usual antics after a thrilling performance at home.

Against Valour, Pacific were doing what Pacific do best: they were clinical, relentless and ready to grab their opponents by the horns. By the 25th-minute, the hosts had 100 per cent of their shots on target and two goals to show for it. At half-time, they had 13 attempts on goal and finished the match with 22. Over their past five matches in all competitions, they haven’t had more than 11.

“Our players feed off this crowd and so far we’ve made this stadium a fortress which we continue to keep doing with the support of our fans,” reflected Kah after the match.

“Being back home actually helped the boys, this was a great team response and a great team performance in the terms of the way we want to be … It’s three great goals. Josh Heard a great individual goal, [Terran Campbell’s] a nice layoff from Diaz, a perfect one-touch finish, and the second one is class.”

“Home is where your heart is and this was a massively important three points but also for [our] character down the stretch.”

Valour remains a club in transition

Since appointing Phillip dos Santos as head coach Valour finds itself in a state of transition. So far, they have shown steady development against their league opponents – most notably, their recent 3-1 win over Forge FC. Thus, how things played out against Pacific would testify to said development.

The match at Starlight Stadium, however, was initially one-way traffic. Throughout the first half, Dos Santos’ side struggled with possession, Pacific’s pace, conceded twice and lacked creativity. Coming out after the break, however, Valour made the appropriate adjustments and gave the hosts a run for their money.

“I felt we were doing well in the game but then Pacific started to find the spaces and they work those spaces very well,” said Dos Santos after the match. “They were finding spaces outside of our two midfielders, making it hard for us to come across, creating overloads in wide areas … We have to give them credit for that.”

“We never settled in the game. Then you’re down 2-1 at half-time and you’re trying to chase a game. Getting that third goal against made it difficult. As a coach, you almost think that the solution you have is to make the game a bit chaotic … put them in a position where they’re not comfortable anymore and we tried to do that. We made substitutions, we made a bit of structural chances just to try and find solutions because when games are not going your way you can’t just look at it and not doing anything. To be fair, it’s a fair result and it’s a win Pacific deserve.”

Now, this point isn’t meant to be a blow to their ego, but more or so a reassurance that Valour still needs time to find their footing. They remain to be a club in transition but also demonstrated Saturday that they are on the way up.

Win or lose, their performance in the second half managed to give CPL fans a glimpse of what is to come. With some more improvement, which may or may not come in the final few matches of the season, who knows where they will be in the future standings.

After being out of action since late August, Pacific FC’s star-man Marco Bustos finally returned to play at Starlight Stadium. And what a time to do so! Pacific were back at home following multiple matches on the road, needed three points to get back to the top of the table and held the lead when Kah substituted the 25-year-old on the pitch. The stage was set.

His roughly 10-minute cameo ended up being a promising one. Bustos entered the pitch to loads of cheers from fans and didn’t take long to remind viewers what he can do with the ball. He managed to link up with his fellow attackers within the first two minutes, wasn’t afraid to drive against Valour defenders and finished with two shots including one on target.

After the match, Kah admitted his timely return is a massive boost as the playoffs loom. “It is great, it is huge, it is I think a timely way that’s arriving for him and for the team,” he said.

“It gives [us] a huge boost to have one of your best players back into the group and in the mix of play. He needs it and he will continue to need it. For us, we’ve been patient with him and now is the right moment to give him something.”

“He’s coming in with a great lift to continue to help the group. As a team, everybody is massively happy that we can have him back at the right stretch of the season.”

After bagging a brace on the night, Pacific FC’s Terran Campbell continues to demonstrate the impact he has within the team. Kah applauded the player’s consistency and “difference-maker” qualities that have helped carry the squad lately.