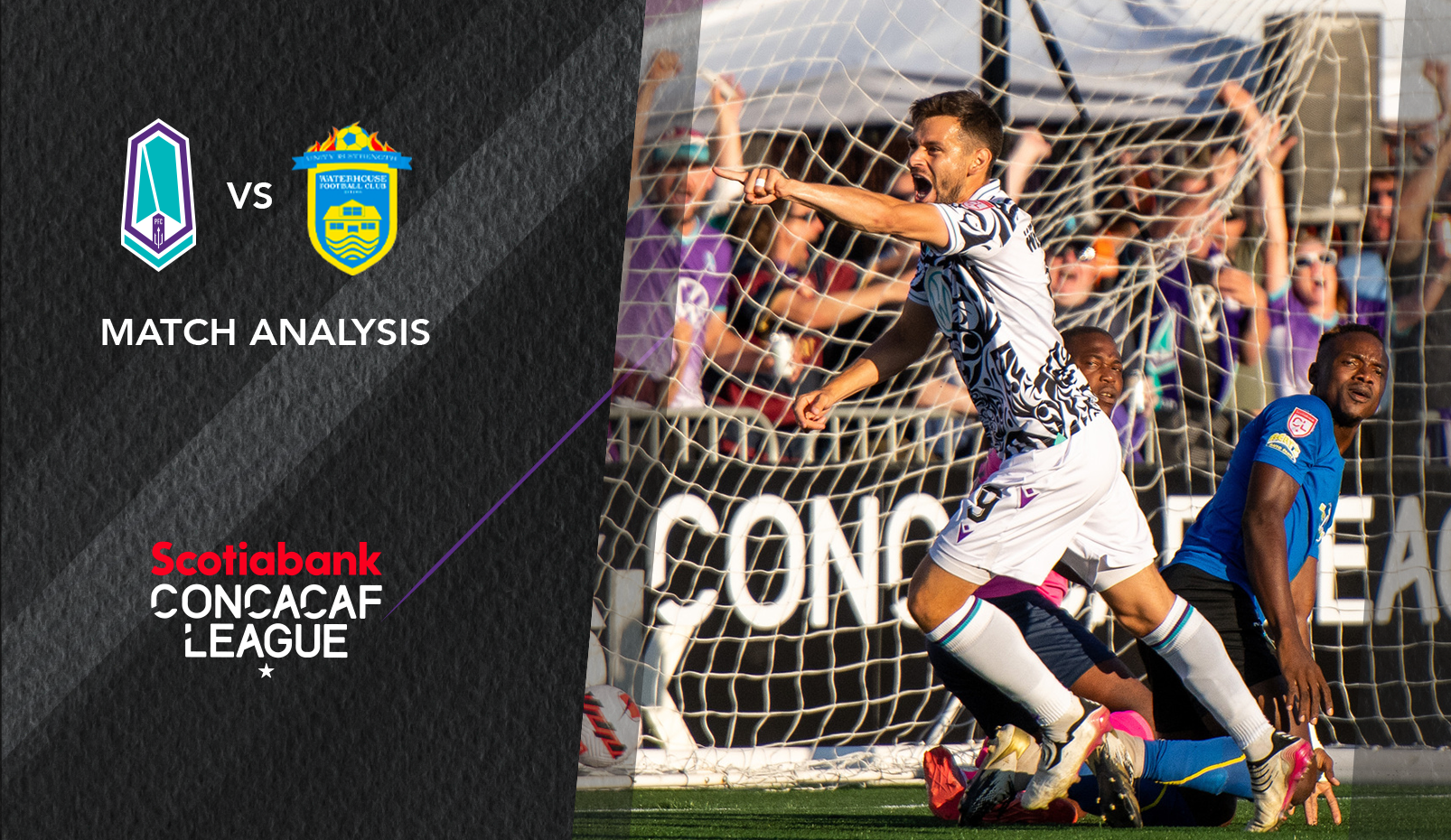 Pacific FC were ascendant on Tuesday night at Starlight Stadium, as they booked their place in the Concacaf League’s round of 16 in emphatic fashion with a 6-0 win over Jamaican side Waterhouse FC.

Entering the decisive second leg after a 0-0 draw on the road in Kingston last week, Pacific scored early and often en route to the widest margin of victory in club history. CPL Golden Boot leader Alejandro Diaz opened the scoring, and Marco Bustos added a second before halftime, before the host Tridents exploded in the second half.

Diaz scored a third not long after the break, before Josh Heard added two of his own within five minutes of each other around the hour mark. Diaz would go on to complete his hat-trick in the 74th minute, as Pacific saw out the tie comfortably and booked their meeting in the second round with Costa Rican outfit Herediano.

For the fifth time in a calendar year, Pacific proved on Tuesday that they’re at their best when the margins get smaller and the stakes get higher.

This contest is just the latest in a series of high-leverage knockout match victories for this club in recent memory, following their triumph over the Vancouver Whitecaps and Cavalry FC in last year’s Canadian Championship, as well as the semi-final and final of the 2021 Canadian Premier League playoffs against Cavalry and Forge FC, respectively.

Since the start of 2021, Pacific are 5-2 (one of the losses being on penalties to York United) in do-or-die elimination games, as they continue to demonstrate their ability to manage tight contests and play to the best of their ability when the pressure is felt most heavily.

Pacific knew on Tuesday that conceding a goal could mean curtains for their hopes of advancing, giving that they would have to score two if Waterhouse scored one due to the away goals rule after last week’s 0-0 first leg. Still, they played fearlessly — just as they did against the Whitecaps last year — looking to press and attack rather than defend and pick out a goal on the counter.

Everything went exactly to plan for the Tridents in that sense; Waterhouse, perhaps expecting a more cagey affair after a first leg that could be more aptly described as such, couldn’t handle Pacific’s aggression and didn’t adjust — or, perhaps couldn’t afford to, after falling behind with the clock ticking.

“This is our best performance of the season,” Pacific gaffer James Merriman said. “In terms of how we defended, our discipline defensively, how we attacked, how we were in our transition moments and counter-attacks. It’s something we’ve been speaking a lot about. We were very ruthless and clinical, in the second half especially. We take a lot of confidence from the win, but also how we attacked the game itself.”

Even at halftime, already leading by two goals, Merriman urged his side to continue pressing high and looking for quick attacking opportunities. One of the weaknesses of this team in 2022 has been a tendency to let opponents back into games after taking an early lead, and knowing that a 2-2 score would eliminate Pacific, they stepped even harder on the gas pedal to truly kill off the game comprehensively.

Pacific are certainly grateful that they don’t play again until their August 13 home game against Atlético Ottawa back in CPL action, given the effort they exerted over 90 minutes in this game. Ultimately, though, it will have been worth it, as they proved once again that they thrive under pressure.

As they have done consistently for about a month now, Pacific came out with a 4-4-2 lineup that allowed them to create one-one-one situations — or better — with Waterhouse’s back four and therefore find pockets of space in and around the 18-yard box from which they could score.

However, what that looked like functionally was subtly different from some other contests. In this game, their front four — from left to right — was Gianni Dos Santos, Josh Heard, Alejandro Diaz, and Marco Bustos. That’s the same quartet that started in attack last week in Leg 1, but it played somewhat differently this time around.

Heard, who most commonly plays left wing for Pacific — occasionally on the right, but almost exclusively on one of the two flanks — lined up as the right centre-forward for this one, just inside of Bustos. Dos Santos, meanwhile, was positioned firmly on the left touchline and tasked with getting behind the Waterhouse right-back. Diaz had his typical mandate of finding his lanes to finish crosses, but also occasionally dropping deep to play quick combination triangles with Manny Aparicio and wingers or fullbacks. That allowed him, occasionally, to arrive in the box slightly later, and with Heard often running at centre-backs, Diaz or a fellow attacker often got into good areas unmarked.

The result was spectacular. Pacific’s first goal saw Dos Santos beating his man one-on-one with a Dennis Bergkamp-esque first touch, before finding Diaz on one of those later runs for a superb one-touch finish. The second was an incredible combination between Bustos and Heard — who would then both be involved in each of their team’s successive goals (Bustos didn’t touch the ball before Heard’s second goal, but he did draw away one of the defenders in the box to open the space).

“We have a lot of dynamic players going forward,” Merriman told reporters postmatch. “Now you see, they’re all enjoying it, they’re all competing, they all want to play, and it creates competition in training every single day. They know they need to perform in the match so they can stay in the team, because we have Djenairo Daniels, we have Dos Santos now that have come in and joined Marco Bustos, Alejandro Diaz and Josh Heard, so it’s very competitive up there for those positions and they’ve been excellent.”

The four-man attack continues to be lethal for Pacific, and it’s only improving, as each of the players involved becomes more comfortable with the teammates around him and the tasks required. Attacking chemistry was already a hallmark of this team at its best, but as they diversify their attacking options they’ll only become scarier for opposing defenders.

The going only gets tougher from here for Pacific, who have earned the right to test themselves even further against a true giant of the Concacaf club game. Their round of 16 opponent will be Costa Rican side Herediano, who won this tournament in 2018 and have appeared in the Concacaf Champions League seven times.

That, however, is a matter for Pacific to contemplate a little later this month. For now, they’ll celebrate that they so commandingly defeated a club fifty years their senior (one which, it’s worth mentioning, defeated Herediano in this competition back in 2019).

Tuesday’s win will go down as one of the finest in Pacific’s club history, but the national perspective should not go unheralded. For three years, Forge FC represented Canada in the Concacaf League and did so admirably, advancing further each year and putting the Canadian Premier League on the map in a litany of more established footballing nations in the region. At the same time, though, Forge were largely dominating their domestic league as well, winning its first two championships and topping the table in 2021 — before Pacific finally chopped them down in the most recent final.

So, the question was worth asking: Was Forge’s success a mark of the CPL’s level in relation to its Concacaf peers, or just of one club’s ability to go toe-to-toe with more experienced sides? The answer was certainly both, but that may indeed be the case with Pacific as well. This was, perhaps, the first of these Concacaf League ties involving CPL clubs where the Canadian side was clearly at a higher level than their opponents.

Either way, the Tridents gave further evidence on Tuesday that CPL teams deserve serious respect from any opponent on the continental stage. In essence, they have seized the torch that Forge lit in 2019 and held it high.

This match at Starlight Stadium was a true international cup tie under the lights, in an atmosphere that will surely have impressed the visitors — and any other observers in this tournament now surely hoping they don’t have to walk into that den on Vancouver Island.

“It’s an incredible night for the fans, for the crowd,” Merriman said, acknowledging the significance of the result for his club.

“We haven’t been able to have a match like this since the Vancouver Whitecaps match, and it’s infectious. We want to help grow the game, we’re still growing our fanbase and our recognition as a club, and our team knows that too, the players know that. It was a really important performance for us, and it’ll be big for our fans, for our crowd, and for our stadium going forward.”

Surely, Pacific FC have turned just a few more heads on Tuesday night — both internationally and on Van Isle.

It feels wrong not to give this honour to a striker who scored a hat-trick, but frankly all 11 Pacific starters deserve consideration alongside Diaz. Heard, with two goals and two assists — plus secondary involvement in the sixth goal — was integral to the energy and aggression that Pacific had going forward, and his combination along the right side with Marco Bustos (also a worthy candidate for player of the match) was electrifying all night.

The round of 16 will send Pacific on to play Costa Rican giants Herediano, although they’ll host Leg 1 later this month. Back in the CPL, meanwhile, Pacific look ahead to another home match on Saturday, August 13 when they take on Atlético Ottawa (2:00 p.m. PT/5:00 p.m. ET).