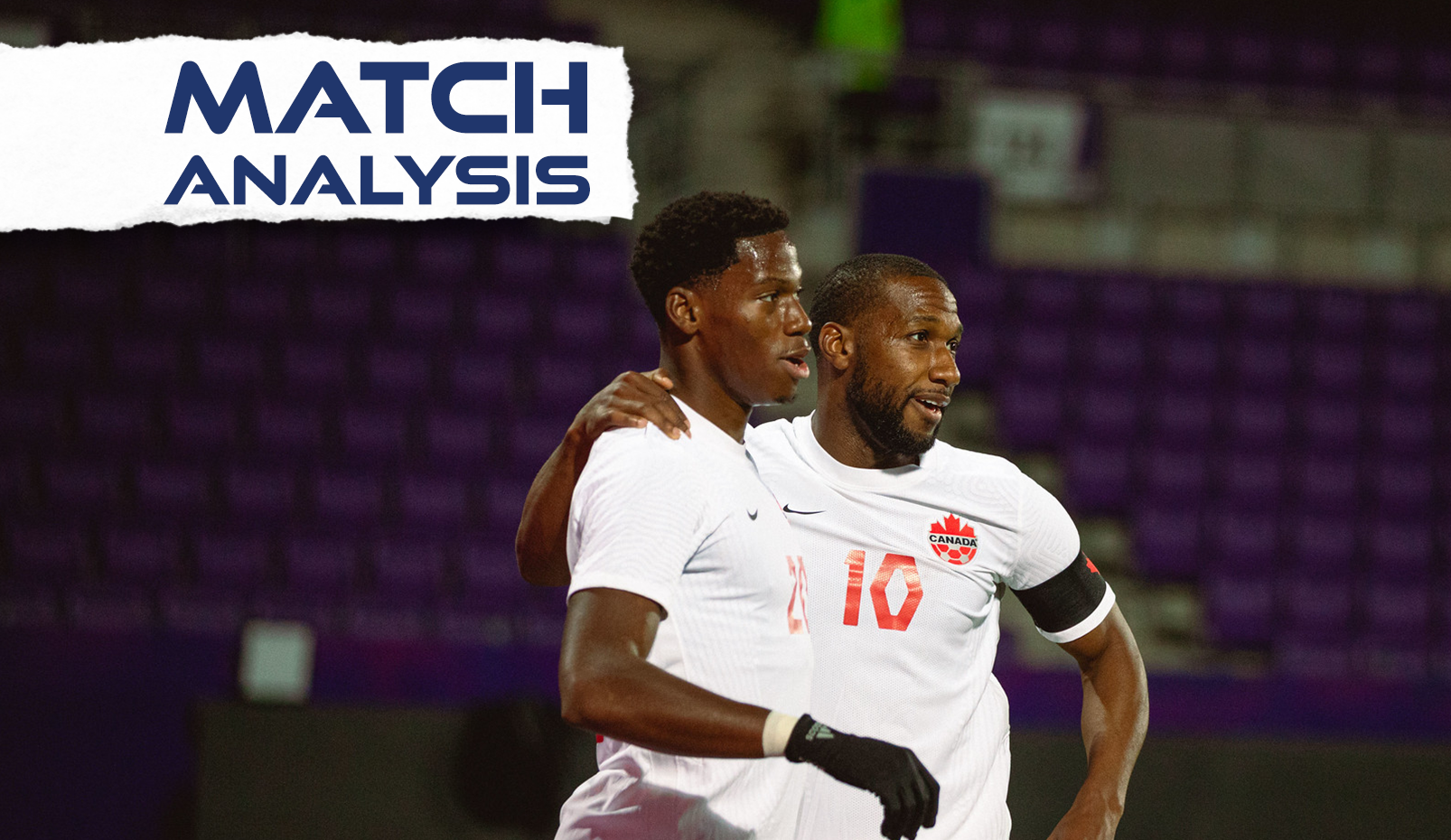 The Canadian men’s national team returned to action during an international friendly against World Cup host Qatar in Vienna, Austria and impressed en route to a comprehensive 2-0 victory.

Canada came out flying, scoring twice in the first 13 minutes of the match. First, it was Cyle Larin who headed home from close range to extend his record goalscoring tally for Canada to 25. Jonathan David then doubled the lead in the 13th minute, moving him into a tie with Dwayne De Rosario for second all-time in men’s national team goalscoring with his 22nd.

That early two-goal lead allowed Canada to remain fairly comfortable for the rest of the 90 minutes. Milan Borjan kept the clean sheet, making a few solid saves despite only being tested twice.

The match was Canada’s first win against a non-Concacaf opponent since John Herdman’s first match in charge of the national team back in 2018, a 1-0 victory over New Zealand in a friendly played in Spain. The victory will give them confidence going into a marquee friendly against Uruguay on Tuesday.

Quick start sets the stage for a dominant performance from Canada

It had been several months since Canada played a truly competitive fixture. A tumultuous June window saw them play against overmatched Curaçao at home, before a match in incredibly inclement weather against Honduras that really didn’t benefit the side much in terms of preparation.

Qatar, meanwhile, has spent significant time together preparing for their first-ever World Cup appearance, one that will come with the pressure of being the hosts no less. They have played 12 official and unofficial matches since Canada last suited up back in June.

In the early part of the match, however, it was Qatar who looked unprepared for the intensity and quality of Canada who took a 2-0 lead within 13 minutes. Cyle Larin and then Jonathan David quickly found the back of the net and John Herdman said Qatar looked “unsettled” by how quickly Canada put them under pressure.

“I enjoyed it,” Herdman told media after the match. “To come away from Canada and Concacaf, it’s been four years, and to play a team like Qatar, who we know is a prepared and organized team, I was happy with the performance. I thought defensively to keep a clean sheet was good. And attacking, we were able to break down their block and we showed that quality.”

Canada was excellent in all aspects of their performance. They held the ball well, had eight shots on target and easily could have had more goals, while limiting Qatar to just two shots.

Defensively, they were excellent at limiting the transitional moments in which Qatar could hurt them. This included several players being quick and alert to get back into position, and a lot of hard work all over the pitch including from attackers like David and Larin who also made some big defensive interventions.

One point of concern for Canada came late in the second half, when Alphonso Davies limped off the field after taking a hard challenge. Herdman said after the match, however, that the plan was always to remove him around that time and that there wasn’t anything too worrisome long-term.

Coming into this camp, one of the biggest questions, as it related to the Canadian men’s national team squad, came in midfield. With mainstays Atiba Hutchinson and Jonathan Osorio both missing out through injury, and Mark-Anthony Kaye not playing regular minutes of late, Herdman elected to go with a central midfield pairing of Stephen Eustáquio and Samuel Piette.

From the opening whistle, the duo impressed, showing an ability to quickly switch the ball across the field and to progress it into dangerous areas that contributed to the buildup of the opening goal. They continued that throughout the match, and as they got more comfortable with their assignments Eustáquio often pressed further forward while Piette did an excellent job of screening the back three.

“I thought we did a good job of moving the ball around,” said Piette, “it wasn’t the easiest pitch to play on but we were able to find the outlets whether it was Kamal [Miller] or Alistair [Johnston] down the side and having those exchanges. Or our key players down the wing who are able to back the difference with combos or just one-on-one. We have a great relationship off the pitch, and I think it showed today on the pitch.”

Defensively, they were both excellent in making recovery runs to thwart a Qatar side that presented a constant threat in transition. The engine and commitment to get back were critical to making sure Canada was rarely outnumbered in defensive situations.

With this in mind, Eustáquio and Piette were also incredibly smart with where and when they played passes, knowing that a misplaced pass could easily turn into a chance going the other way. The two players set the tone in Canada’s impressive possession game, as they had 61 per cent of the ball, and completed 92 per cent of their 635 passes.

Both players have been excellent with their club sides this season. Eustáquio has found consistent playing time in Porto’s midfield, including appearances in the UEFA Champions League. Piette, meanwhile, has always been reliable defensively and solid if unspectacular in possession. This year with CF Montréal, however, he has added a more offensive aspect to his game, with his ability to move the ball forward on display in this match as well.

As Piette mentioned, the midfielders were also given key support numerically in attack as one of Miller or Johnston stepped often forward from centreback to give them further passing options.

Yet another CF Montréal player, Ismaël Koné, also impressed off of the bench in midfield after replacing Piette. From the moment the 20-year-old stepped onto the field, he looked to progress the ball quickly, leading to some good chances.

The health of Hutchinson and Osorio will both be big stories leading into the World Cup for obvious reasons. But Friday Canada showed they have multiple options in this position that will make them competitive.

When John Herdman was asked before this camp why he had named a side with ten players listed as forwards, he alluded to the fact that some of those players could appear in new positions.

Veteran winger Junior Hoilett was one such player against Qatar, who was given the captain’s armband and played 90 minutes as a wingback. It is a position that Hoilett has played significantly of late with Reading in the Championship, but rarely with the national team where he has been preferred further forward.

“I think he’s one of the most intelligent footballers I’ve worked with, he’s a gift in terms of his quality and awareness and understanding,” said Herdman post-match. “I think what is happened at Reading is that he has played nine teams, 90-odd minutes every game. He has not done that in a while in his career. It is the fittest I have seen Junior Hoilett.”

He mentioned that especially with Richie Laryea not being in season with Toronto FC when the World Cup kicks off, and the fact that he would prefer to play Davies further forward, wingback is a position where Canada required more depth. Hoillett is one of those players who gives him an option at that position.

“He has given us adaptability,” said Herdman. “In the wide areas, we haven’t got great depth there unless we are going to start bringing Alphonso [Davies] back out of our frontline. So Junior gives us that opportunity to, number one give us flexibility. He has a different profile to [Richie] Laryea or [Sam Adekugbe]. He’s got the experience and defending in the championship, it isn’t easy. If you have a look at some of his statistics he’s in the highest percentiles for his tackling ability.”

From that wide spot, Hoilett was able to drift inside and create opportunities, as he did on Canada’s opening goal, while also giving his side a good outlet in transition. Especially against sides like Qatar who sit back, he could be a real weapon for Canada in this position.

Another player who impressed during the match at the wingback position was substitute Liam Millar. The 22-year-old Basel attacker is probably on the fringes of Canada’s World Cup squad, but impressed out wide in this match showing a willingness to beat players in wide areas.

In 74 minutes of action, Eustáquio was once again central to Canada controlling the tempo of the match in the middle of the park. The side showed an ability to hold the ball and break down a solid opponent, led by their midfield maestro.

An even bigger test awaits next for the Canadian men’s national team, as they take on Uruguay in Slovakia on Tuesday, September 27 (12:00 p.m. ET/ 9:00 a.m. PT) in another international friendly.