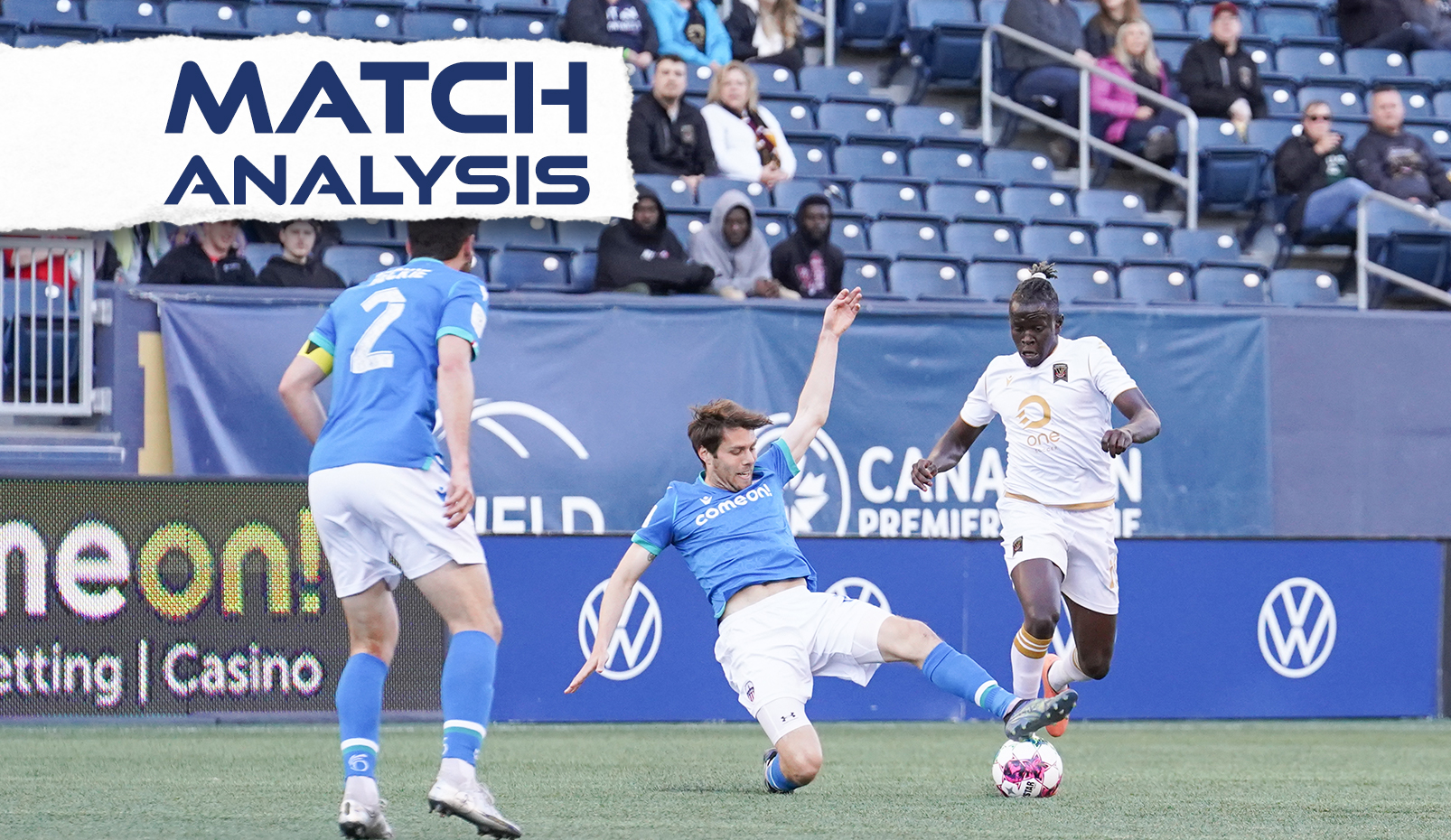 Valour FC will be left to scratch their heads at yet another late goal conceded, this time in a 1-0 loss to Atlético Ottawa. Zachary Verhoven’s 82nd-minute winner handed the visitors their second straight victory on the road and fourth of the season, through eight matches.

Nate Ingham added his third clean sheet of the year in the Ottawa goal, but was tested just once over the course of 90 minutes as Valour once again struggled to produce offence at home. With another home game against FC Edmonton coming up on Sunday, this will be something they have to fix quickly should they want to remain in contention.

When it comes to picking which is the most relevant sign of just how much Atlético Ottawa has improved this season, it is the dealer’s choice.

It could be the fact that, on the back of losing 6-1 to Valour earlier in the season, they went into Investors Group Field and not only picked up a point, but also a clean sheet. Or, that it took Ottawa a full 19 games, until September 19, before they picked up their 14th point last season. This year, it took them eight.

After beating FC Edmonton 2-1 in their last match at Clark Stadium, they have now picked up two road wins in a row. This time, they did so by frustrating a very solid Valour side, who had almost as many yellow cards (five) as shot attempts (six).

“We kind of thrive off of these moments, and once things get a little bit heated in the match we kind of grow from that,” said Ottawa midfielder Carl Haworth. “Away from home it suits our style a little bit more, we are able to adjust and we can play a little bit tighter and then just punish them when we get our chances.”

Ottawa was given a little extra time to prepare for this match, as they hadn’t played since May 22, and used that to their advantage. Instead of needing time to settle into the game, they matched Valours intensity from the start, and the details paid off.

“Every game that you have time to prepare you can go more in detail,” said Ottawa coach Carlos González. “So this week we went more in detail on the game plan and I think that the players did a great job to believe in the plan first and then make it work on the field.”

One of those details was recognizing that this was going to be a tiring match, one that would need more than just the starting eleven to get the job done. With that in mind, González made a number of planned substitutions, two of whom, Verhoven and Haworth, combined for the winning goal.

“We knew that the substitutions were going to be a key point in the development of the game,” said González. “So I think we did a great job there and the players that came on from the bench gave us this extra [energy] that the team needed at that moment.”

Only Forge FC has scored more goals than Valour this season. Yet, only one of those thirteen goals scored so far this year has come in Winnipeg. Through three home matches in 2022, Valour has scored just a single goal — potentially the goal of the year, mind you — but still a concerning tally.

Tonight, despite possessing the ball well and getting into good areas throughout 90 minutes, they managed just a single shot on target and a lowly 0.29 xG. With two more home games coming up in quick succession, including hosting FC Edmonton on Sunday, Valour coach Phil Dos Santos knows this has to change in a hurry.

“The truth is that you can’t afford to fall behind too far,” said Dos Santos. “We had two very difficult road game, we were able to secure a point in Pacific. But like I said before the game that point only matters if you are able to take care of business at home. The same applies to all the efforts we put in on the road, we need to do the job at home.”

When asked what he thought on the team’s offensive effort on the night, Dos Santos said it was lacking.

“Not enough, another game where you had in large parts of the game, the ball. You had what I call territorial control,” Phillip Dos Santos. “We weren’t stalled in the opposition’s half, and we weren’t able to create enough, we weren’t able to have quality in our final product.”

It was a sentiment echoed by fullback Brett Levis. The man who scored an incredible goal the last time these two sides met was often left frustrated any time he ventured into the attacking third. He wasn’t alone on the night among his Valour teammates.

“We possessed the ball well, I think we broke their press well,” said Levis, “unfortunately, I think our final product wasn’t there. And when that happens, time and time again throughout the game, and you can’t get that final piece going, you leave yourself susceptible at the back.”

A quick glance at Valour’s passing chart throughout the match confirms what both Dos Santos and Levis saw at field level. There just wasn’t enough quality in the final third deliveries, look at just how many red unsuccessful passing arrows there are below.

After goal-fest last outing, both sides settle into a defensive opening half

That last time Atlético Ottawa and Valour met in a Canadian Premier League match, there were five goals scored in the first half. Today, there was only a single shot on target.

This was surely a welcome development for the visiting Ottawa, who saw four of those five goals go against them en route to a now-infamous 6-1 loss. Valour, on the other hand, was left somewhat frustrated as they had a lot of the possession, at 53.8% but not a lot of it was necessarily purposeful with just a single shot attempt inside the box.

The majority of the half was played in the middle of the park, with neither side looking to give up an inch. When they did, both sides were aggressive in making sure the advantage did not last with a combined 16 fouls, and two yellow cards apiece in the first half, many of which came stopping breaks downfield.

The below chart of players’ average positions shows just how congested the middle of the park was during this match as neither side were able to gain much of an attacking foothold.

Both teams were also very careful in possession, with the home side completing 83% of their passes, and Ottawa managing 82.7% in the opening 45. When they did lose the ball, the sides made sure it was not in dangerous areas. Atlético Ottawa only won possession twice, while Valour did so just once, in the final third during the opening half.

In a match with very little going for it offensively, Bassett just kept trying and trying to create an opening until he finally did late in the match. His brilliant through-ball found Haworth in plenty of space down the right-flank who set up Verhoven for the winner. Bassett had a stunning 21 passes into the final third during the match.

Valour’s homestand continues with a meeting with FC Edmonton on Sunday (4:00 p.m. ET/3:00 p.m. MT). Atlético, meanwhile, is also in action on Sunday (1:00 p.m. ET) as they host league-leaders Pacific FC at TD Place looking to avenge a 1-0 loss suffered in this fixture last month.