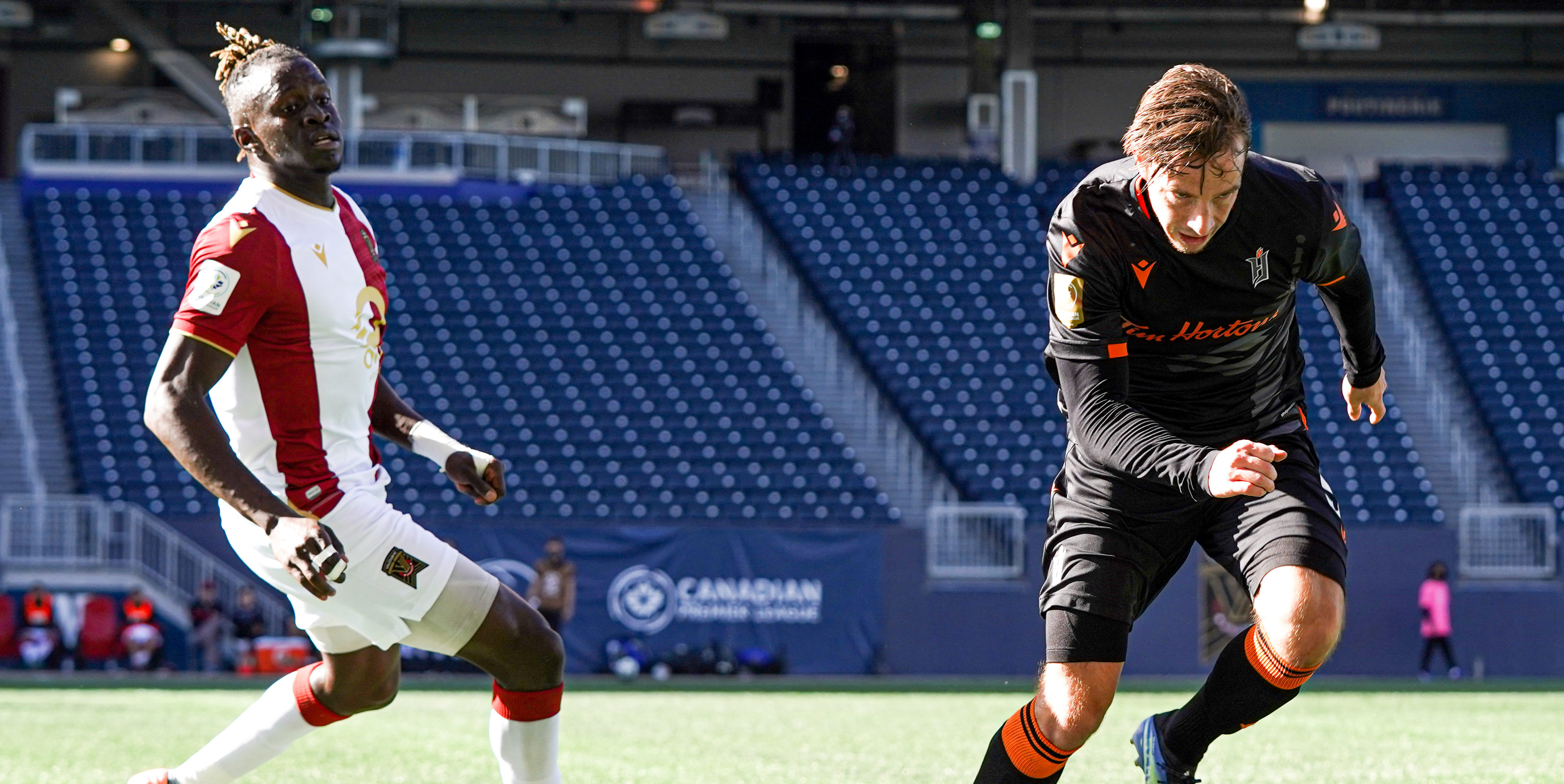 Phillip Dos Santos recorded his first coaching win in the Canadian Premier League on Thanksgiving Monday, as his Valour FC defeated Forge FC 3-1 at IG Field. Rocco Romeo got the hosts off the mark early with his back-post finish in the fifth minute, but Forge equalized just before the 40-minute mark as Garven Metusala struck home a loose ball in the box.

The visitors wouldn’t be level for long, though, as William Akio scored on the brink of halftime with one of the finest solo runs of the entire CPL season that took him all the way from his own half to the goal, through several defenders. Moses Dyer added the third for Valour in the second half, bringing down a lobbed pass and finishing clinically to put the Winnipeg club firmly in the driver’s seat.

As has been pointed out all season, this Valour team has always been at its best when playing a direct, purposeful style to force opponents to run backwards and lose their shape. They did an excellent job of that against Forge on Monday, with players like William Akio, Brett Levis, and Moses Dyer keen to run forward with the ball and midfielders constantly looking for incisive passes through the middle. The first goal came from a combination of those things: Raphael Ohin played an excellent ball to Dyer, who ran determinedly toward the end line before playing in his cross to the back post.

Valour’s second goal came in transition — a phase of the game where they’ve often been able to hurt opponents. Akio picked up the ball very deep in his own half and, seeing no pass options he liked, he chose to take it forward himself rather than play backwards and reset. That bravery paid off — Akio’s incredible individual skill brought him all the way into the box for him to score his fourth of the season.

Again, in the second half, Valour found success with verticality. Ohin’s ball right over the top of Forge’s backline found Dyer, who read the play better than Dominic Samuel and took the right touch to set himself up for a shot.

That they’ve been able to build on fundamentals where this club has already had success in the past is encouraging; Valour have looked better and more comfortable in each successive contest under Dos Santos, who explained that part of his immediate job has been to identify ways he can make an impact on the team right away — which he seems to have done.

“There’s moments where now you can develop your ideas as a coach,” he said postgame. “I think the most important is to set a platform and a foundation, and things that you can impact immediately. From there, the idea of a coach is never over; you progress, you develop dynamics, but I think that we’ve set a foundation that allows us to grow from there and the signs are encouraging.”

The defending champions entered this game with a massive incentive for securing three points: thanks to Pacific FC’s defeat at HFX Wanderers earlier in the afternoon, a Forge win in Winnipeg would have put them in sole possession of first place (for the first time this year), with two games in hand.

Instead, it wasn’t Forge’s day at IG Field. Though they fought well to get back into the game and, at last, were rewarded for a stretch of dominance with Metusala’s first-half goal, they seemed to take their foot off the gas at the wrong moments — including shortly after that goal before halftime, when William Akio cut so aggressively through their scattered defenders to strike in transition and put Forge’s hard work to waste.

Forge, like the other two sides currently in the race for first, will be very eager to secure that spot and, with it, home field advantage throughout the playoffs.

Monday’s game wasn’t necessarily one where Forge played poorly — they were exposed by Valour’s quick play a few times, and they conceded at costly times, but they were in control for very long stretches as they typically like to be. Nonetheless, they had to play from behind for all but about 12 minutes of the game, which doesn’t necessarily lend itself to the kind of calm, methodical football that Forge often play.

Bobby Smyrniotis explained postmatch that he wasn’t overly disappointed with his side’s performance, but the goals they conceded were uncharacteristic of his team, and that put them in a deep hole.

“It’s the second and third goal,” Smyrniotis said on what went wrong for his side. “Forge doesn’t give up goals like that, so if you give up goals like that it’s how the score goes, it’s as simple as that. The second and third goal come from something that’s uncharacteristic of us, and for the way we defend and do things, and that doesn’t give you much of a chance in this game.”

The Hammers threatened most with set-pieces on Monday, with Omar Browne nearly finishing Kyle Bekker’s delivery from just outside the box and a few other chances coming close. With nine shots — four on target — they did get into the attacking third a decent amount, but Valour consistently turned them away from the middle.

With those two games still in hand, Forge still seem as likely as anybody to end up with that top spot, but they will leave Winnipeg feeling like they missed a golden chance to make up ground.

The Winnipeg club have continued to improve in this 4-2-3-1 formation that has been quite consistent under Phillip Dos Santos. Fullbacks Andy Baquero and Federico Peña were quite busy in the wide areas against a Forge side looking to play down the wings, and for the most part they did well to cut off the more dangerous channels for cutback passes. Peña made a team-high six tackles and four interceptions, and Baquero had four tackles, four interceptions, and two clearances.

Daryl Fordyce and Raphael Ohin also played their parts well in the middle; Forge didn’t often play through the centre, but that was in part due to the solid block established by those two for Valour to force Forge into the battles with fullbacks out wide — with wingers Brett Levis and William Akio tracking back well to cover space and isolate Forge’s wingers.

“To win games you need to be a team that’s disciplined, that matches the opposition or even goes above the opposition’s effort,” Dos Santos told reporters postgame.

“It was important for us to believe that we needed to respect a very good team that was in a very good moment, still playing in all fronts that they have to play. We wanted to respect them but not be afraid, and I think today the team was very well-disciplined, very well-structured; we didn’t back off. Yes we had moments where they had a bit more of the ball in our half and we dropped a little bit lower in our half than we would like to, but I think overall we were stepping the lines every time we had a chance to, we were putting pressure on the ball carrier and never allowed them to really settle in their game.”

The more familiar Valour have become with this structure, the better they’ve been as players get more comfortable in their roles and start to figure out when they need to either press forward or sit back in a bank of four or five. Up front, Moses Dyer and Rafael Galhardo have done their part as well, essentially taking turns in pressing and dropping deep — Galhardo is usually the number 10, but it hasn’t been uncommon to see him push ahead of Dyer to put the centre-backs under pressure.

Certainly, Forge’s equalizer in the first half came from a breakdown — primarily, Stefan Cebara failed to get a good touch on the cross and put it on a plate for Garven Metusala to score. Still, it wasn’t necessarily a lapse in organization; most players were in position despite Forge getting forward quickly.

The New Zealand international was tremendous in the centre-forward role, doing the bulk of the work ahead of Romeo’s early goal to provide the assist and then bagging one of his own in the second half with an excellent run and finish.