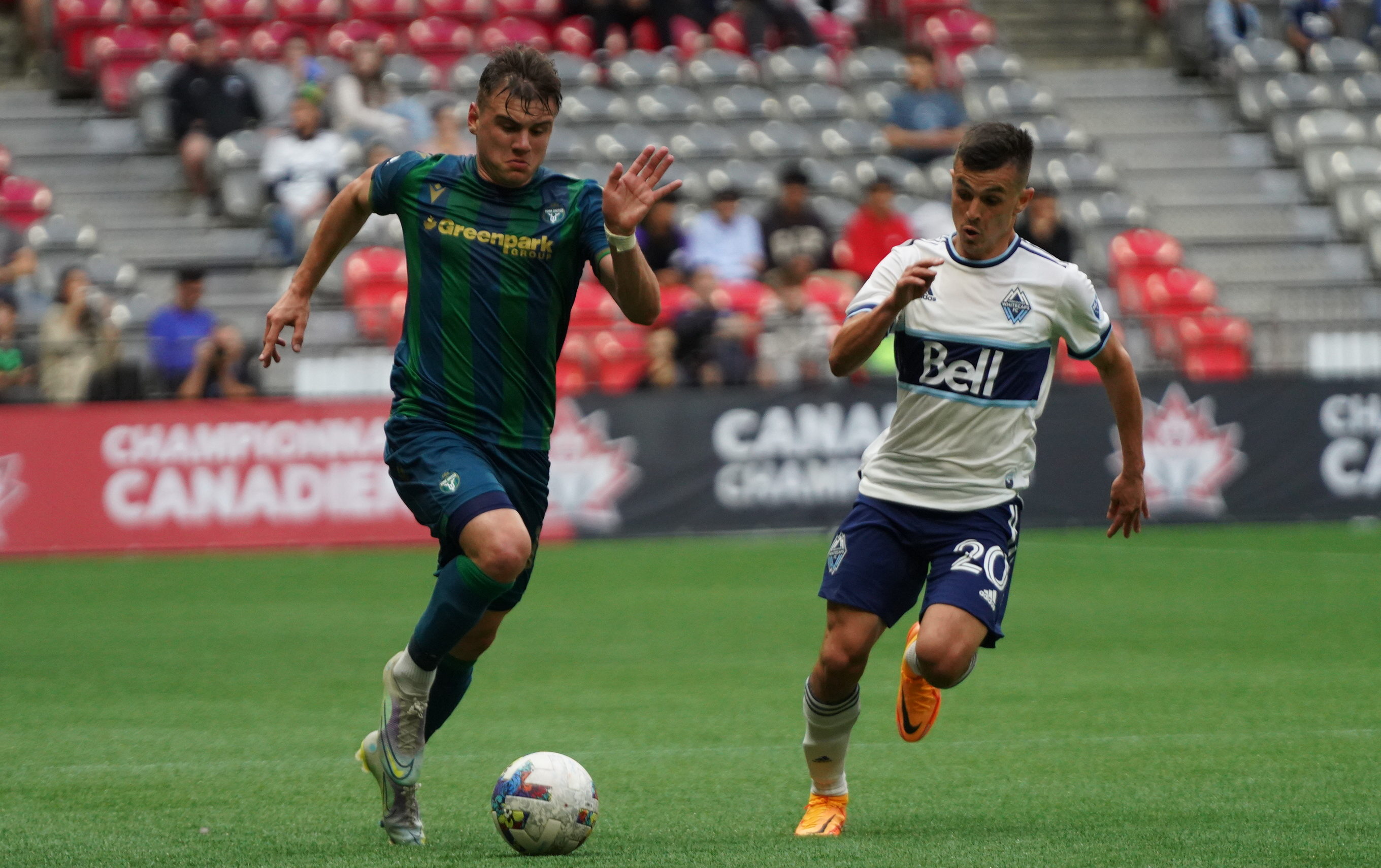 The Vancouver Whitecaps are moving on to the 2022 Canadian Championship final, as they defeated York United 2-1 at BC Place on Wednesday night in a tight semifinal tie.

After a scoreless first half which saw neither side able to solve the other, the Whitecaps at last found the net in the second stanza, as Brian White scored a pair to put his side firmly ahead. York ensured the contest was compelling right to the end as Isaiah Johnston found the net in the 84th minute, but they ultimately could not produce a second goal and bowed out after a memorable cup run.

A key indicator of the difference between Major League Soccer and Canadian Premier League sides is the speed at which they move the ball, particularly through the central channels. Vancouver’s double-pivot in the middle consisted of Paraguayan Designated Player Andrés Cubas and Canadian men’s national team veteran Russell Teibert, with Scottish DP Ryan Gauld just ahead of them as a number 10.

So, the middle is an area of the pitch where the Whitecaps have a lot of quality, and it showed for much of Wednesday’s match. Many of their best chances in the first half — most notably, Lucas Cavallini’s 29th-minute strike that evoked a superb Niko Giantsopoulos kick save — came from their ability to play quick, aggressive passes forward to break York’s lines and make them run backwards.

On the occasions when Vancouver weren’t as direct, they ran into more trouble trying to advance the ball, particularly when Cédric Toussaint and Mateo Hernández could play with their backs to goal and the ball in front of them.

Gauld in particular was a major threat for the Whitecaps, creating five chances and assisting the second goal, with 14 passes in the final third. The fact he was so involved and created so much with just 46 touches (third-fewest among Vancouver’s starting outfield players) is indicative of how quickly he and his fellow midfielders were looking to move the ball vertically.

As the second half progressed, Vancouver began to move their possession a little wider, with Toussaint and Hernández finding their footing a little more. On the whole, Hernández in particular was actually quite effective — he had four interceptions, won three tackles, and won five of seven duels — although he would have liked to be on the ball much more, being a player who likes to control play and pull strings from the middle.

Whitecaps boss Vanni Sartini identified postmatch that his side was indeed much more effective when playing direct balls, having struggled on the occasions where they broke the line and held the ball up too much to allow York to set up their back four and get the midfielders back in place to help.

About midway through the first half, Sartini swapped wingbacks Cristian Dajome and Ryan Raposo’s sides, which put Dajome up against Osaze De Rosario instead of the pacier Max Ferrari, allowing  him to create a few more chances from that side as well.

York backline tricky to break down but can’t hold forever

As expected, York’s trademark well-organized back four was a difficult challenge for the Whitecaps to solve. The team’s usual quartet of Diyaeddine Abzi, Jordan Wilson, Dominick Zator, and Chrisnovic N’sa sat in a well-drilled flat line at the back when out of possession, and in the first half they were able to weather everything Vancouver threw at them.

Much of their success, though, came from all four defenders winning individual battles at speed against the Whitecaps’ attackers. In the wide areas, Abzi and N’sa were clever with their body positioning to ensure they cut off the lanes into the half-spaces that the likes of Cristian Dajome and Ryan Raposo were looking to play into from the flanks.

In the middle, both Wilson and Zator were typically dependable breaking up play, and both players made a handful of last-ditch tackles — brave ones at that, inside the penalty area — to see off some of the more threatening passes into the box. The centre-backs both had five clearances, keeping things generally under control particularly in the first half, and in general they rarely found themselves out of position.

Ultimately, in Yeatsian fashion, the centre could not hold. The second half saw Vancouver switching the ball from side to side more frequently to try and open up more space in the middle, and it paid off in spades. Both goals came from balls crossed in from the side and Brian White finding open pockets for himself to pounce on the ball in the six-yard box.

“We don’t have a switch that puts us on the killer instinct,” said Whitecaps coach Vanni Sartini. “It’s the way you arrive into chances.”

He added: “(York) did their job very well. Very compact, and trying to exploit every set play, and then of course they have a goal and they took the game right to minute 93, but I’m happy that we didn’t panic.”

Nonetheless, York coach Martin Nash was pleased with how his side handled itself.

“I think it’s big, to come here and have that kind of effort,” he said. “It’s a great reminder of how good we really are. I really, really believe in these guys.”

As York’s remarkable Cup run comes to an end, they’ll surely exit and turn their focus back to the league with renewed focus and confidence, having seen the heights they can achieve if things fall their way a little more.

Whitecaps keep York possession to outside, prevent touches in box

As the Nine Stripes grew into the game and sought to put more pressure on the Whitecaps, especially after falling behind, they looked to increase the pace of play via the wide areas — through Diyaeddine Abzi’s pace and long balls up to Osaze De Rosario, specifically.

Through that, York actually did well getting into more dangerous areas — they had 30 final third entries in the second half, compared to 19 in the first — but they ran into somewhat of a wall trying to turn those entries into true goalscoring opportunities. They had just 11 touches in the box through the 90 minutes (compared to 30 for the Whitecaps), six of which were from Abzi alone.

With the Whitecaps playing with a back three in defence, York were able to get behind the attacking wingbacks Raposo and Dajome, but the three centre-backs compressed well to prevent ventures into the penalty area — and they steered away most crosses in the air as well.

York manager Martin Nash pointed out postmatch that his team did truly struggle to create or get the ball to forwards in the box, especially in the final 10 minutes after they pulled within a goal.

“We fought right to the bitter end and we made it close,” Nash said. “We couldn’t really create much after we scored but we got to some good areas still. But I’m really proud of the guys, it was a great performance. We fought for every inch.”

The Caps’ centre-backs didn’t actually dazzle on the stats sheet in terms of tangible defensive actions, but their positioning and man-on-man tracking was responsible for forcing low-percentage passes or attempts to centre the ball that went unclaimed by York’s central players.

Vanni Sartini was quite pleased with his side’s ability to keep York at bay in the final few minutes, although he admitted his heart rate went up in the final stages as memories of Vancouver’s past history in the Canadian Championship intruded in his mind. It seems, though, that the Whitecaps’ apparent curse in this competition may be broken.

“I was of course on my toes, in the sense that I didn’t want to see them scoring in the last second,” Sartini said. “Luckily we live in an illuministic society where rationale is better than anything else, so curses don’t exist.”

The American striker scored the pair of goals that ultimately sank York, but he was dangerous throughout, with six shots to his name and some good interplay alongside Cavallini as well.

The final of this year’s Canadian Championship will take place in July (exact date TBD), with the Whitecaps taking on Toronto FC for the Voyageurs Cup.

Back in CPL action, York United’s next contest will be against Valour FC this Sunday, July 26 at home (12:00 p.m. ET)