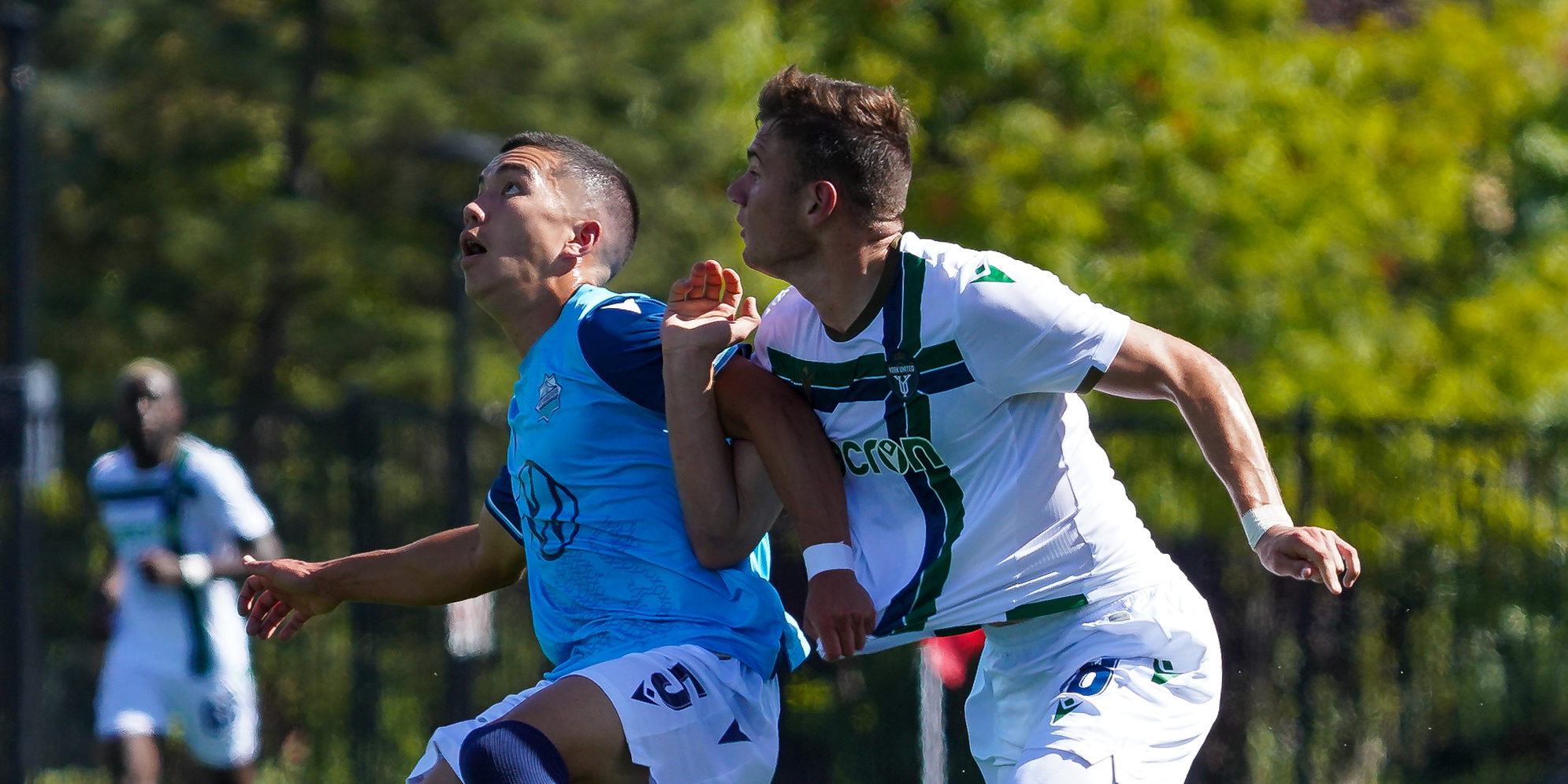 Despite no shortage of chances at both ends of the pitch, this ComeOn! Match of the Week showdown between York United and HFX Wanderers FC ended in a 0-0 draw, as neither team quite managed to put the ball in the back of the net. So, the two sides were forced to settle for a point apiece as they battle directly for that fourth and final CPL playoff spot — which York managed to keep hold of with the result.

The chemistry in this York team has come a long way this season, to the point now that their movement is quite impressively in sync. Many of their most dangerous attacks in this match came from a good ability to keep the ball moving forward, with quick passes forward to cut through the HFX lines. After passing, the York players would remain constantly in motion, drawing defenders with them and finding new space for further quick passes.

Along the left side in particular, Diyaeddine Abzi and Alvaro Rivero were able to get behind Wanderers fullback Jake Ruby on a few occasions, where they were able to cut to the middle and find runner in the box (even if the finishing was lacking… more on that later).

Sebastian Gutierrez, often the final link for the attack playing through balls into the striker’s feet, looked excellent for York in the number 10 position, managing to find good pockets of space in front of the backline.

With Lowell Wright coming on for York at halftime in place of a fatigued Julian Ulbricht, the hosts found a slightly different dimension to their attack with some more pace and Wright’s ability to hold up play.

Still, despite the excellent buildup play, the Nine Stripes never did manage to unlock the Wanderers fully to find the edge they needed.

The Wanderers on Saturday showed some flashes of the dangerous counter-attacking that was a hallmark of theirs in the 2020 CPL season, with the forwards and central midfielders looking to win balls with tackles and interceptions high up the pitch — Alejandro Portal, playing mostly as a winger, made five tackles, and in the middle, Pierre Lamothe won possession a team-high nine times.

Alessandro Riggi and Cory Bent both found themselves through on goal in the first half, but goalkeeper Nathan Ingham managed to parry both attempts. HFX didn’t manage to pin York back very frequently, but a handful of times they were able to turn the centre-backs thanks to the pace of Bent and Stefan Karajovanovic moving in on the counter.

Of course, to create those counter-attacking opportunities, HFX needed to defend quite a bit — across the team, they had 14 tackles and 11 interceptions, with centre-backs Peter Schaale and Jems Geffrard doing well to keep the side organized at the back.

Probably an obvious point after a 0-0 draw, but the finishing was a major issue for both teams on Saturday. York had 17 shots, but just one of them was on target, with most of their attempts ending up behind the goal (although Sebastian Gutierrez’s first-half strike off the post came very close as well).

On the Wanderers’ side, the visitors managed to put six of their 12 shots on target, but still they didn’t quite threaten with their attempts, although they did draw a couple of good saves out of Ingham.

Both managers postmatch explained that they saw both sides struggling with fatigue out on the pitch, which might help explain why the teams didn’t have that extra edge needed to find the scoresheet, but it wasn’t for a lack of chances.

“I thought that when we did get to the final third we were lacking that little bit of energy that we’ve had over the past few games where everything’s clean, whether it’s a pass or a finish,” York gaffer Jimmy Brennan suggested. “Today we were reaching at things.”

HFX coach Stephen Hart felt similarly, unable to quite explain why his side couldn’t find the net: “We had planned to come and put them under pressure, tried to get an early goal or two, and I certainly think we had the chances to do that. You never know how they would react if that had occurred. No team dominates for 90 minutes, and we knew at some point they would have their period of domination, and fortunately they didn’t score either… Really and truly, I can’t answer why we couldn’t score.”

Hart also felt that the latter stages of the contest were a little more cautious, with both sides knowing full well the massive implications of the game, which might’ve played into the fact that neither side could really break down the other fully.

Despite playing through fatigue, Ferrari produced some of the most entertaining moments of the match with his runs from the right flank. The Wanderers worked hard to mark him out of the game as much as possible, but even still he managed to get behind the defence on a few occasions — creating five shots and two key passes.

Both sides will now turn their attention to the Canadian Championship, as they each prepare to take on MLS opposition this Wednesday, September 22. York will travel across the city to take on Toronto FC at BMO Field (7:30 pm ET), while the Wanderers will go back home to host CF Montreal (5 pm ET/6 pm AT). Watch all matches live on OneSoccer.