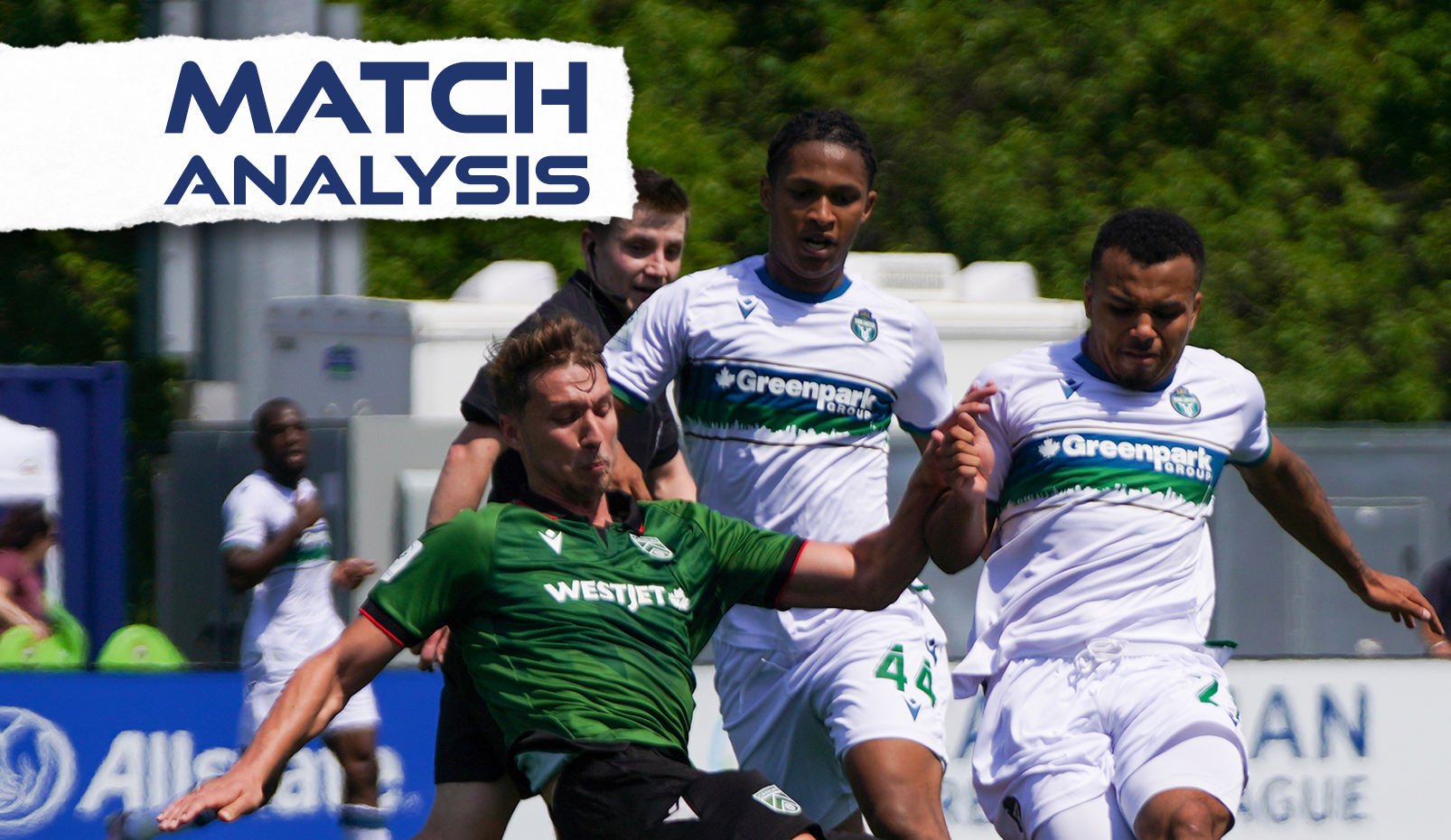 Cavalry FC claimed all three points in a reverse of fortunes from their last trip to York Lions Stadium, as the Cavs topped York United by a 1-0 scoreline. After a cagey, physical first half that saw neither side able to find the back of the net, Cavalry finally found the sole breakthrough they needed as Sergio Camargo and Aribim Pepple — both coming off the bench — combined for the latter’s first goal in the CPL.

Cavalry rewarded for energy off the bench with triple sub

It’s always a bold move for a coach to make three substitutions at once, particularly with a full half-hour left to play, but Tommy Wheeldon Jr.’s gamble in this match paid off beautifully. The Cavalry boss made a trio of changes at the hour mark, bringing Sergio Camargo, Aribim Pepple, and Bradley Vliet into the match in place of Jean-Aniel Assi, Ali Musse, and Ben Fisk.

As a result, the Cavs were able to shake up their attacking structure significantly. Vliet, more of a natural fullback than José Escalante, slotted into the backline on the left, which allowed Escalante to advance up the pitch more and join the attack. Camargo sat fairly centrally just behind Myer Bevan, looking to create with his passing ability and vision — which, before long, he did.

The opening goal came from some clever work by Camargo, who made a run into space on the right wing and brought down a long ball from across the pitch. He set it up beautifully for his fellow substitute Pepple, and the 19-year-old finished on his second attempt.

“Sometimes us coaches get lucky, hey?” Wheeldon said. “We knew it was a tough game at York; we haven’t lost since we came here (last time). There was a bit on it, (Martin Nash) is a good friend of mine and we knew he would be organized and ready for us. York are a team of great energy, they’ve got great compete, very well organized.

“The word is patience; we knew we had to bring in that energy in the 60th, 65th minute and change the game.”

The goalscorer Pepple explained after the game that he’d always expected to come in around the hour mark, with the directive being to inject some energy into the match when York might be labouring under the heat and physicality.

“In the buildup before the game (Wheeldon) said that he knew it would be a tight game, but he knew that quickly if you come on you can make a difference,” Pepple said. “Because of the heat, everyone’s going to be a bit more tired; obviously everyone needs water breaks, and it’s a fast-paced game. So the plan was always to come on, be direct, get in the box, and thankfully it dropped.”

Cavalry’s triple substitution undoubtedly changed the dynamic of the match significantly; they were a little bit less direct with Camargo on the pitch instead of Musse and Assi, but perhaps more creative with their passing, and Wheeldon pointed out postmatch that Camargo helps Cavalry get on the ball much more in the attacking third. Certainly, it’s very encouraging for Wheeldon to know that he can change up his attacking tactics mid-game like that and have it work well.

Tempers boil over as York get into card trouble

Cavalry FC have long been one of the most frustrating teams to play against in the CPL with their physicality and intensity, but this particular match had extra bite to it, perhaps rooted in the fact these sides already played each other a few weeks ago.

Referee Ben Hoskins went to his pocket early and often on Sunday, showing a total of 11 yellow cards — including one to York coach Martin Nash. He did not hesitate to show Chrisnovic N’sa a second caution in the 84th minute, sending him to the dressing room early.

The game had 29 fouls in total — not an outrageous number by any stretch — but it seemed that the fouls that did happen were generally quite aggressive ones. There were 100 total duels between the sides (of which Cavalry won 53), and both teams seemed intent on setting a ton and establishing physical superiority in the middle of the pitch, affording their opponents little breathing room.

“That was a tough game,” York defender Dominick Zator said. “Everyone was battling, maybe the weather played a factor as well; it was hot out there, so everyone’s maybe a little bit off, then you’re getting into tougher challenges. I think there’s too many yellow cards that were given out and it changes the game, it gets everybody frustrated and then tackles are flying. But it was a very physical game.”

The problem, now, for York is that the effects of this game be felt next week in their match against Halifax. N’sa will, of course, be suspended because of his red card, but so too will Isaiah Johnston and Diyaeddine Abzi, who both picked up their fourth cautions of the year and are now set to miss out due to accumulation.

“You’ve got two teams that just don’t want to lose, which is great, and I love the fight in our team,” York gaffer Nash said. “But we’ve got to learn, being a young team, that we just can’t step over the mark, because I think we might have a few suspensions now for next week, which is going to make things difficult because we’re a really small squad right now. We’ll see what that means, but you’re going to get that with two teams that want to battle, give everything for three points.”

York build from left, look for Wright with long switches — but lack finish

With Diyaeddine Abzi and Sebastián Gutiérrez combining very well along the left wing, York forced Cavalry to focus much of their attention on that side of the pitch. Gutiérrez would often tuck in toward the left half-space and attempt to play quick passes up to an overlapping Abzi. Soon, though, the Nine Stripes seemed to realize that with so much of their possession coming along the left side, Lowell Wright — playing as a very wide right winger — was often left unmarked or in space as the Cavs’ backline generally stayed quite narrow.

Abzi, as well as midfielders Cédric Toussaint and Noah Verhoeven, seemed to be constantly looking for opportunities to play long diagonal balls across the pitch to Wright, who has the pace and footwork to make good use of all that space and drive toward the box.

“He got on the ball; he put in two or three really good crosses, and he has that ability — he’s really good technically,” head coach Nash said of Wright’s performance on the wing. “I think he gets more joy, more of the ball in that area. And really, in a lot of ways I’m just trying to put my best players on the pitch, and he’s got to do the job there. He’s been doing a really good job and created our best chance.”

Ultimately, the main think York missed in this game was the final ball. Osaze De Rosario had a couple chances created by Wright that he likely should have finished, and a number of other chances were ultimately squandered — York had 11 shots, but just one of them was on target.

“I think we’ve gotten into some great areas, but some of it’s decision making and some of it’s finishing, to be fair,” Nash added. “It was one of those games that was fairly even, I would think — I haven’t watched it back obviously, but it seemed fairly even. I thought maybe we edged it on chances but they finished theirs and we didn’t finish any of ours.”

The central midfielder was at the top of his game for Cavalry in this one, hitting 92% of his passes accurately and winning possession a team-high six times, making his first start for the club in over a year after last season’s Achilles injury.

Up next for York is a trip out to Nova Scotia, where they’ll take on HFX Wanderers FC next Saturday, June 4 (2 p.m. ET). Cavalry, meanwhile, get a bit of a break in their schedule, with their next match not coming until Saturday, June 11 when they host the Wanderers at ATCO Field (3:30 p.m. ET/1:30 p.m. MT).