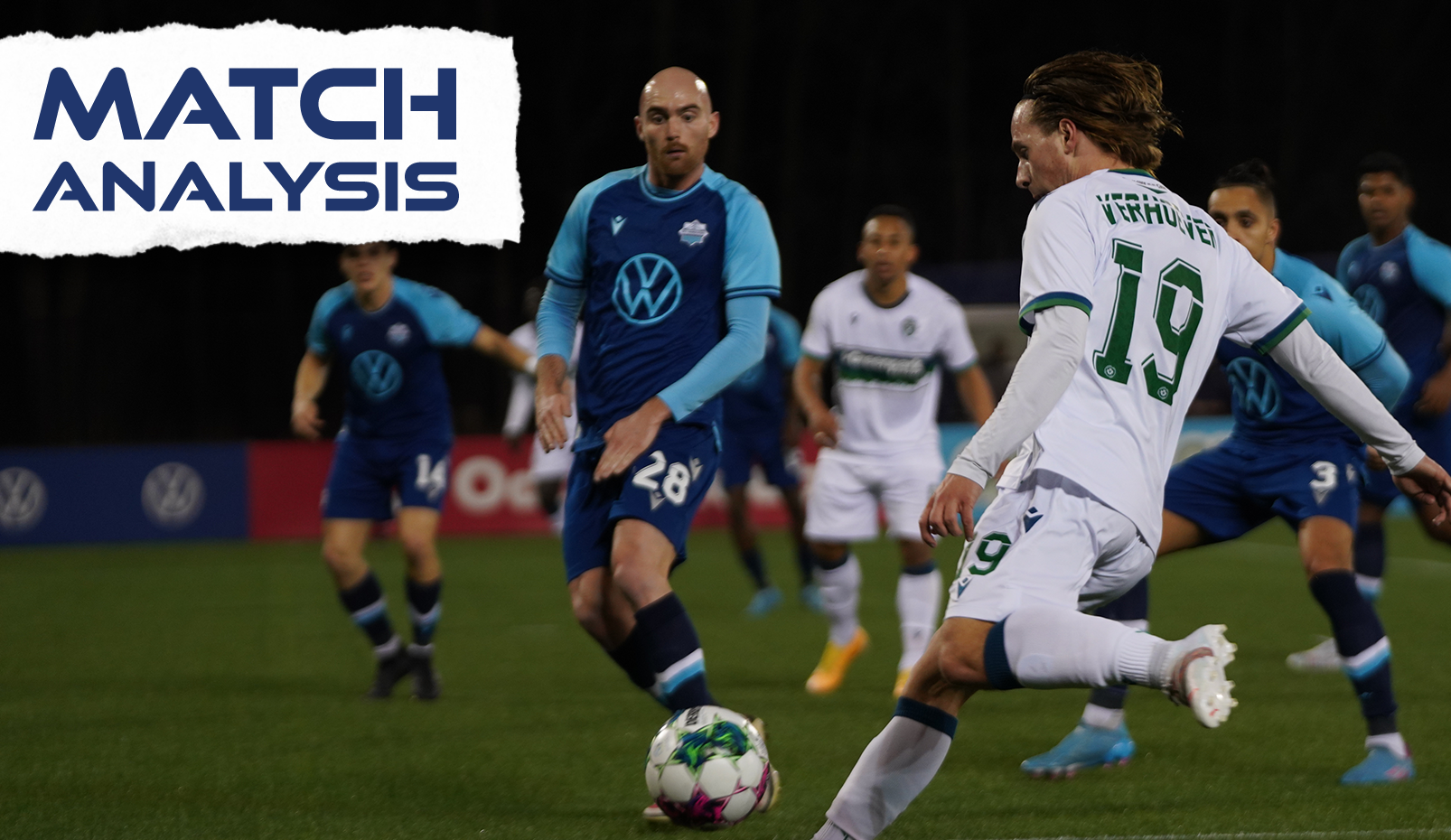 After a scoreless first half which saw just one shot on target for both sides, the Wanderers finally found the scoresheet early in the second frame as a hard aerial challenge from Roger Thompson in the box gave João Morelli the chance to make it 1-0 from the penalty spot — which he did, off the right goalpost.

Although York had plenty of possession and a few golden opportunities in the final half hour — including a Lowell Wright shot that hit the post — but they were never able to solve the Wanderers and find their equalizer.

Wanderers find opportunities with pace on right side

With two of York’s most dynamic left-sided players — Diyaeddine Abzi and Max Ferrari — not quite fit enough to start this game, the Wanderers’ right side of Cory Bent and Zachary Fernandez had a significant advantage in pace along that particular touchline playing against Michael Petrasso and Eduardo Jesus of York.

Throughout the first half especially, Halifax were very deliberate in playing quickly up both flanks — Obeng Tabi had a few blistering runs along the left as well — but the majority of their joy seemed to come along the right. Fernandez was able to play himself through past defenders, or otherwise pickpocket the ball out wide, stealing it off Petrasso on at least a handful of occasions.

On the whole, it seemed like the Wanderers moved a little faster than York especially along the flanks, moving into attacking phases quickly and trying to stretch out a generally well-organized opponent.

Bent finished with four touches in the box and nine passes into the final third — many of them to Fernandez making overlapping runs (he himself entered the attacking third with possession five times). The final product wasn’t there between the two, and Bent did stray offside quite a lot — four times, in fact — but that combination showed a lot of promise on Thursday.

“When you find that you are in a good moment at certain parts of the park, it’s important to go there as much as you can until they figure it out,” Hart said of his right-sided duo. “I thought both of them did very well; we could have done better with our runs into the box, because some of their crossing or their passing into the box was excellent.”

For much of the game, but especially after falling behind, York were very keen on attacking the Wanderers’ defence via the air. They played in 23 total crosses — a staggering 19 of them in the second half — and won 71% of the aerial duels, so they certainly dominated above the turf, but the Wanderers did well enough to keep York’s headed attacks mostly away from the goal.

In the second half — especially after Diyaeddine Abzi came in for the final half hour — York improved massively at getting into the half-spaces and finding space for players to cross the ball, and they also earned a lot of dangerous set-piece opportunities around the penalty area that Noah Verhoeven (or, toward the end, Mateo Hernández) delivered well.

“We started to get ourselves back into the game, and of course they started chasing the game, but the aerial bombardment, they were raining in balls on us,” Stephen Hart said postgame. “We didn’t have the biggest squad out there but I thought we dealt with it well and managed to hold on for the win.”

Indeed, York did seem to have a height advantage; centre-backs Dominick Zator and Roger Thompson pressed forward for many of those set-pieces and did well, each of them winning three aerial duels on the night (from three attempts).

“We had a chance to kind of organize during an injury break and we got much better later on in the half,” York boss Martin Nash said. “Second half, I thought personally we were the better team, we were creating chances, doing a lot of good chances but just couldn’t buy a goal.”

After scoring 14 league goals in 2021, reigning Player of the Year João Morelli has already stated heading into 2022 that he’d like to create more this season to help his teammates contribute more on the scoresheet. He has explained that he’s naturally a number 10, with parallel ability to bang in goals himself and set up strikers further ahead of him.

In this game, with Akeem Garcia out due to a hand injury, Stephen Hart couldn’t quite afford to drop his most prolific scoring option into midfield. So, Morelli lined up in a sort of false nine position flanked by Cory Bent and Alex Marshall, which ultimately meant he covered almost every inch of space between the penalty areas. When the Wanderers were in possession, he could frequently be seen dropping well into his own half, even occasionally offering himself as a pass option out of the back for the centre-backs.

Then, in other phases of the match, Morelli tried to stretch the pitch by drifting higher and forcing the opposing defenders back, or otherwise running at centre-backs to try and prevent them playing out of the back along the ground.

“Yeah it’s kind of a false nine, it gives me a free role,” Morelli confirmed postmatch. “(Stephen Hart) tells me to just go wherever you feel like you’re getting the ball, try to create a bit too, so drop a little bit when you feel like it. But the main position is just on top of the defenders, trying to make some noise, dropping as a 10 too.”

He did add that, naturally, this position is a physically demanding one with the amount of running he’s required to do, but he’s happy to shoulder the load on nights such as these where his team is successful.

Although this free-roaming position for Morelli did allow him to grow into the game and go searching for the ball deep in midfield, the Wanderers were noticeably missing a presence at the top when Morelli dropped. With a lot of the Wanderers’ transitional play coming along the flanks, the wingers didn’t make many runs in behind the centre-backs to provide that option.

As a result, the Wanderers — much like in 2021 — did a good job of getting into the attacking third, but didn’t create the high-danger chances they would have liked, and ultimately found their goal via a Morelli penalty kick.

The skillful Brazilian, as already explained, was all over the pitch on Thursday, recording five shots and 13 passes into the final third, plus two successful dribbles and, of course, the only goal of the match.

York will now head out to Alberta for a match with FC Edmonton on Friday, April 15 (9 p.m. ET/7 p.m. MT). HFX, meanwhile, will remain in Ontario for their next contest, going to the nation’s capital for a date with Atlético Ottawa on Saturday, April 16 (1 p.m. ET).