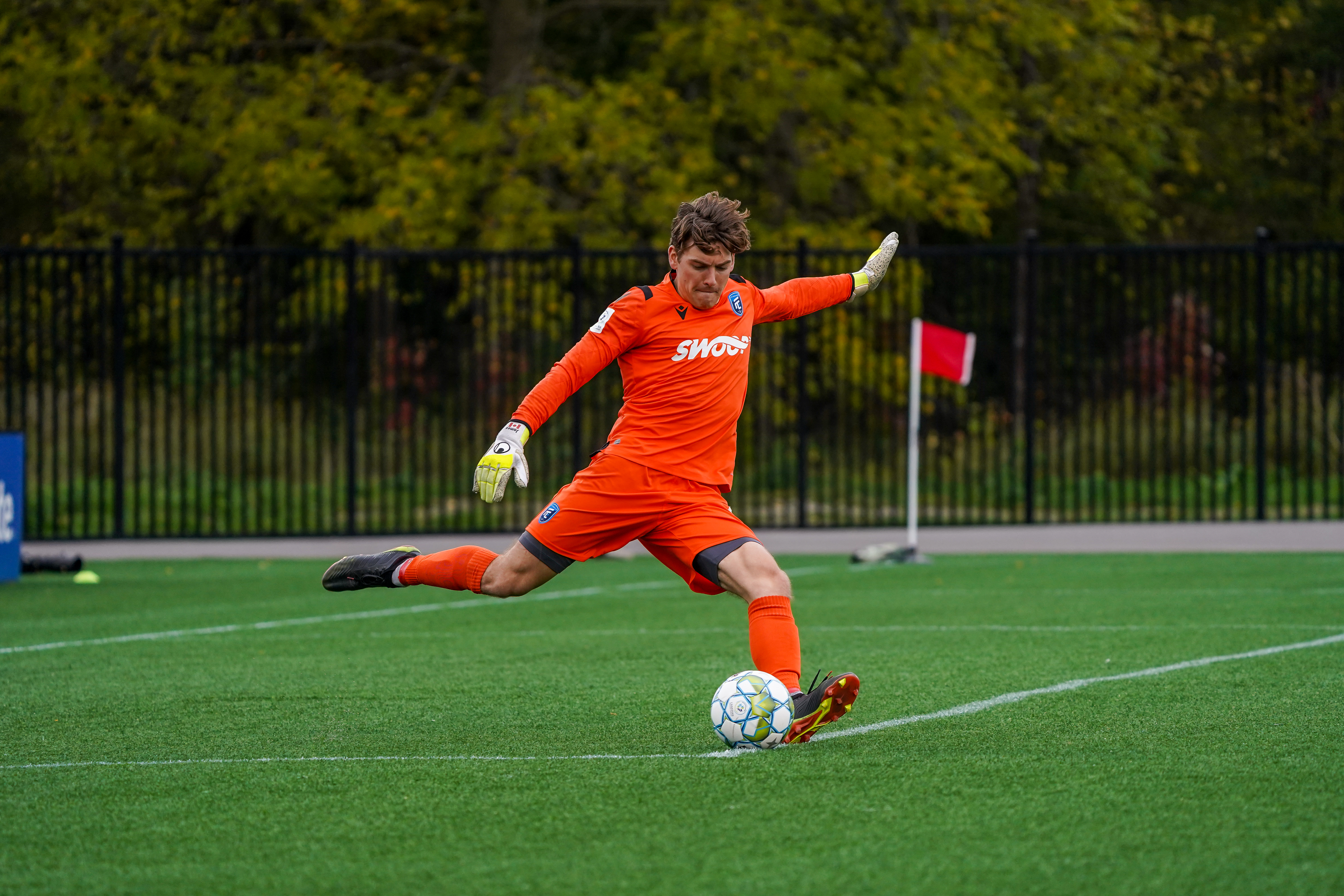 York United and FC Edmonton drew 1-1 at York Lions Stadium on Sunday, thanks to a pair of goals early in the second half. After a scoreless first half, Easton Ongaro opened the scoring for the visitors, firing a shot into the top left corner after running onto a precise pass forward from Shamit Shome. Jordan Faria, who came off the bench at halftime, equalized moments later for the home side with a hard shot from close range. Both sides pushed for a winner over the next 35 minutes or so, but the match would end tied at one.

After looking lively in the first half, but having his lone shot blocked by a York defender, Ongaro opened the scoring less than two minutes into the second half.

After Shamit Shome picked up the ball in midfield, he passed it through a gap in the York backline to Ongaro, who took a touch before firing a left-footed shot into the top left corner of the goal. It was his 11th goal of the season, leaving him three back of Morelli with three matches remaining for his team.

“It was a nice bit of build-up play from us, quick transition,” said Ongaro after the match. “We get the ball to Shamit in the middle, and he’s done well to slip me in behind. For me it’s simple, get in and put it on net and score the goal. It was a good goal early in the second half, and I was hoping it would give us a bit of confidence to finish out the half, unfortunately we conceded shortly after, but we need to do better at closing out games and holding leads.”

“That’s what he’s good at,” added head coach Alan Koch. “If you give any good quality number nine space, they’re going to hurt you, and that’s what he did on his goal today. I feel like the group created some other chances for him too. It’s impossible for anyone to take every chance created for them, but I was glad to see him get rewarded with an important goal for himself, but also an important goal for our team.”

York United head coach Jimmy Brennan brought midfielder Jordan Faria off the bench at halftime for Sebastián Gutiérrez, and the 21-year rewarded his head coach’s faith in him.

After Ongaro scored the opening goal moments after halftime, Faria responded, taking a touch to get the ball away from a defender and blasting into the back of the net.

GOAL 👑@YorkUtdFC find a quick equalizer vs. @FCEdmontonNow as Jordan Faria gets on the eventual end of a corner kick to bury his effort coolly#CanPL 🍁 | 📺 TELUS ch. 980 | 🔴 https://t.co/hishXepRT3 pic.twitter.com/wgGq5hTfdC

It was Faria’s first CPL goal in his ninth appearance, and he also picked up an assist in the Canadian Championship.

In 45 minutes of action the former Toronto FC II midfielder completed 12 of his 14 attempted passes, fired in a few crosses, and had two shots — including the goal.

Faria has struggled to get regular playing time in his first season in the league, but certainly made the most of this opportunity. He dealt with an injury earlier in the season, and also faced tough competition in a crowded York midfield.

“It was great because know how long Jordan’s been waiting to get into the lineup,” said Brennan in his postgame press conference. “He’s been frustrated with the injury that he picked up at the beginning of the season. You end up chasing the season, try to chase your fitness levels, because the majority of guys throughout the league and in our team have played 20-odd games.

“Jordan has worked awfully hard to get to where he is now, and it’s good to see that he’s getting more minutes, he’s starting to get a little more confident and his fitness is coming along. I was delighted for him to get a goal, because I know how down and frustrated he’s been over the last few months.”

Connor James has been the number one goalkeeper in Edmonton for three years now, and it doesn’t look he plans on giving that spot up any time soon.

He regularly came to his side’s rescue on Sunday, making seven saves in this match — none bigger than a stop on a hard driven shot from Michael Petrasso — as well as three clearances, one punch and one claim.

Eddies boss Alan Koch said that he had a feeling ahead of this match that James would have a big role in its outcome.

“I actually thought that this morning, playing in a game that had so much meaning for York, that CJ was going to have to make a couple of big saves for us to get something out of the game, and thankfully he did,” Koch said in his postgame press conference. “Incredibly proud of his performance, he’s another true professional, he’s a guy who works incredibly hard every single day.

“He made some big time saves today, and kept us in the game at times, and helped us manage the game. He made some key saves at key moments in the second half.”

“He’s a major part in our team and game in and game out he performs for us,” added Ongaro. “Again today he made a lot of big saves for us and kept us in it.”

The Edmonton goalkeeper made seven saves in an impressive outing between the sticks.