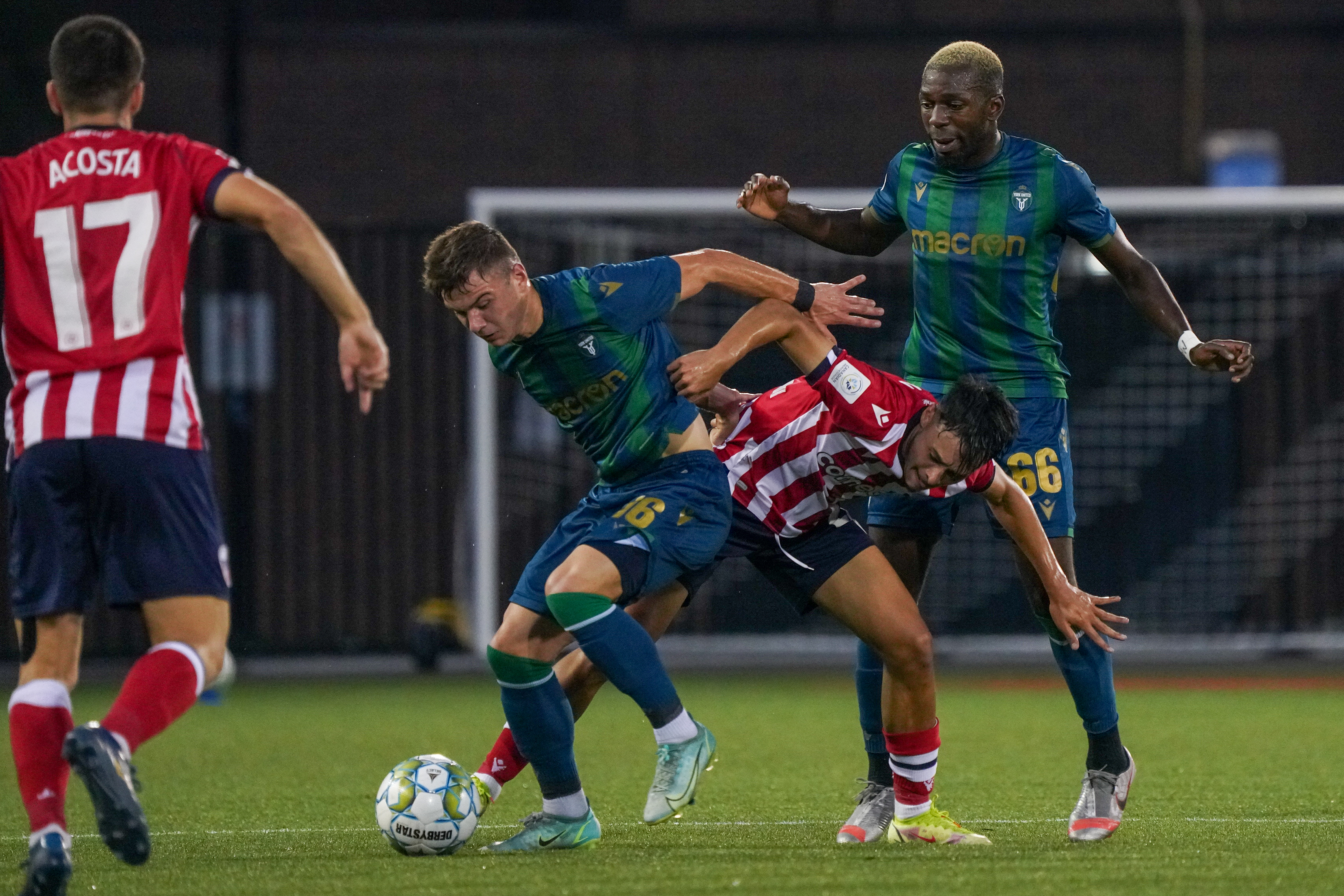 York United beat Atlético Ottawa 2-0 at York Lions Stadium on Tuesday night, helping them move into the top four in the CPL standings.

A brilliant give-and-go between Abzi and Alvaro Rivero, finished by Abzi, gave York the lead just after half time, while Gutiérrez doubled the advantage with a low shot three minutes after coming off the bench later in the half. The home team, led by their captain Roger Thompson, held things down defensively to seal a second-consecutive clean sheet in an all-around strong performance from Jimmy Brennan’s team.

The 2-0 win is the latest result in a strong run of form for York, against an Ottawa side that has had the opposite fortunes in recent times — now winless in their last seven league matches.

Making just his sixth appearance of the season, after getting injured early in the season, York United captain Roger Thompson is back with The Nine Stripes, and put in a strong 65-minute shift on Tuesday night. Thompson returned to the side last time out against Forge FC on Saturday, coming off the bench for the last five minutes or so, but was handed the start this time around.

Not looking like he missed a beat, Thompson completed 46 of his 52 attempted passes (88.5%), helping The Nine Stripes build out of the back and start counter-attacking movements, as they’ve been doing so well in recent times. He also shared the team lead in interceptions with two, as well as winning possession nine times, the most of anyone who took the pitch.

Returning during the club’s best run of form this season, Thompson brings both defensive solidity and strong leadership to the York squad.

“It’s huge to have Rog back, he’s someone who’s been in the game a long time,” said York midfielder Isaiah Johnston. “That little spell where we couldn’t see out games — he’s a player who comes in and helps us do that with his experience and his ability, so it’s great to have him back in the lineup.”

“I thought Roger was solid, and it’s great to get the big man back,” added head coach Jimmy Brennan. “He’s been out for a while. We had to monitor his minutes tonight, he couldn’t last 90 but at least we got 60-odd minutes out of him, which is good. He felt good after the match, and it’s nice to have the big man around the training sessions now and get him out onto the pitch for matches.”

Ottawa solid defensively, but broken down twice by York counter-attack

Defensively, Atlético Ottawa had a very strong match on Tuesday night as a whole, but they were again let down by individual moments that had disastrous outcomes. On the second goal in particular, Sebastián Gutiérrez was given a lot of room to run through the middle relatively unchallenged, and get the shot away that beat Dylon Powley.

Considering how lethal York’s counter-attacking has been in recent times, however, Ottawa did a good job of shutting them down. The team made a combined 31 tackles, 13 clearances, and seven interceptions — compared to York’s fifteen, nine and eleven, for example — a no-nonsense style of defending that should win them games when they start to put the ball in the back of the net on a more regular basis as well.

Playing in front of his former club, and on the campus of his former school at York University, Ottawa defender Matthew Arnone said that he was happy with how his team defended as a whole, but that they were again beaten by their own individual errors.

“I think we [defended the counter-attack] pretty well,” Arnone said after the match. “I think where we did get broken down was not in transition, so mission accomplished from our perspective when it comes to limiting the transition. I think we got hit a few times, especially being a team that wants to get on the ball and dominate the ball.

“Mista prepared us well for preventative defending in the sense that we’re going to stay tight to their outlet pass, which is what they do. To be honest, from their perspective, allowing a lot of players to hang back rather than jump back into the shape and gamble with numbers down defending, is something we identified,” Arnone added. [Their] centre-back were being very aggressive on the outlet pass — I think [defending that] went really well. Individual battles were lost, and the ball ends up in the back of your net twice. We’ve done our job, except for executing in those moments on both defending and attacking.”

With their win on Tuesday, York United overtook Valour for fourth position in the CPL standings.

Since the start of August, The Nine Stripes have picked up at least a point in eight of their nine CPL matches, and dominated Master’s Futbol Academy in a 5-0 Canadian Championship win as well. They are putting in very strong performances, and are being rewarded for them at the moment.

They should probably have even more points, as they have dropped points from a winning position on multiple occasions in recent times — with the recent 3-3 draw against HFX Wanderers one that was particularly frustrating for the side.

Tuesday’s win was an important one, and puts the pressure on Valour and HFX Wanderers to now catch them for the fourth spot. They are also just three points back of 905 Derby rivals Forge FC for third place.

“[The win] was huge for us,” said Johnston. “We knew we were tied on points with Valour, and if we could get three points here we’d go alone in the fourth spot. It puts pressure on other teams to now catch us, instead of us trying to catch other teams. It was a big result.”

In their best form of the season on the attacking front, and the aforementioned Roger Thompson returning from injury to help hold things down defensively, York United are in a great position to continue their rise up the standings.

The York United left back was solid on both sides of the ball, and scored the winning goal for The Nine Stripes.

York United are back at home on Saturday, September 18 (2 pm ET/ 3 pm AT) for a match against HFX Wanderers. Atlético Ottawa have an extra day off, and hit the road to take on Pacific FC at Starlight Stadium on Sunday, September 19 (2 pm ET / 5 pm ET). Watch all matches live on OneSoccer.