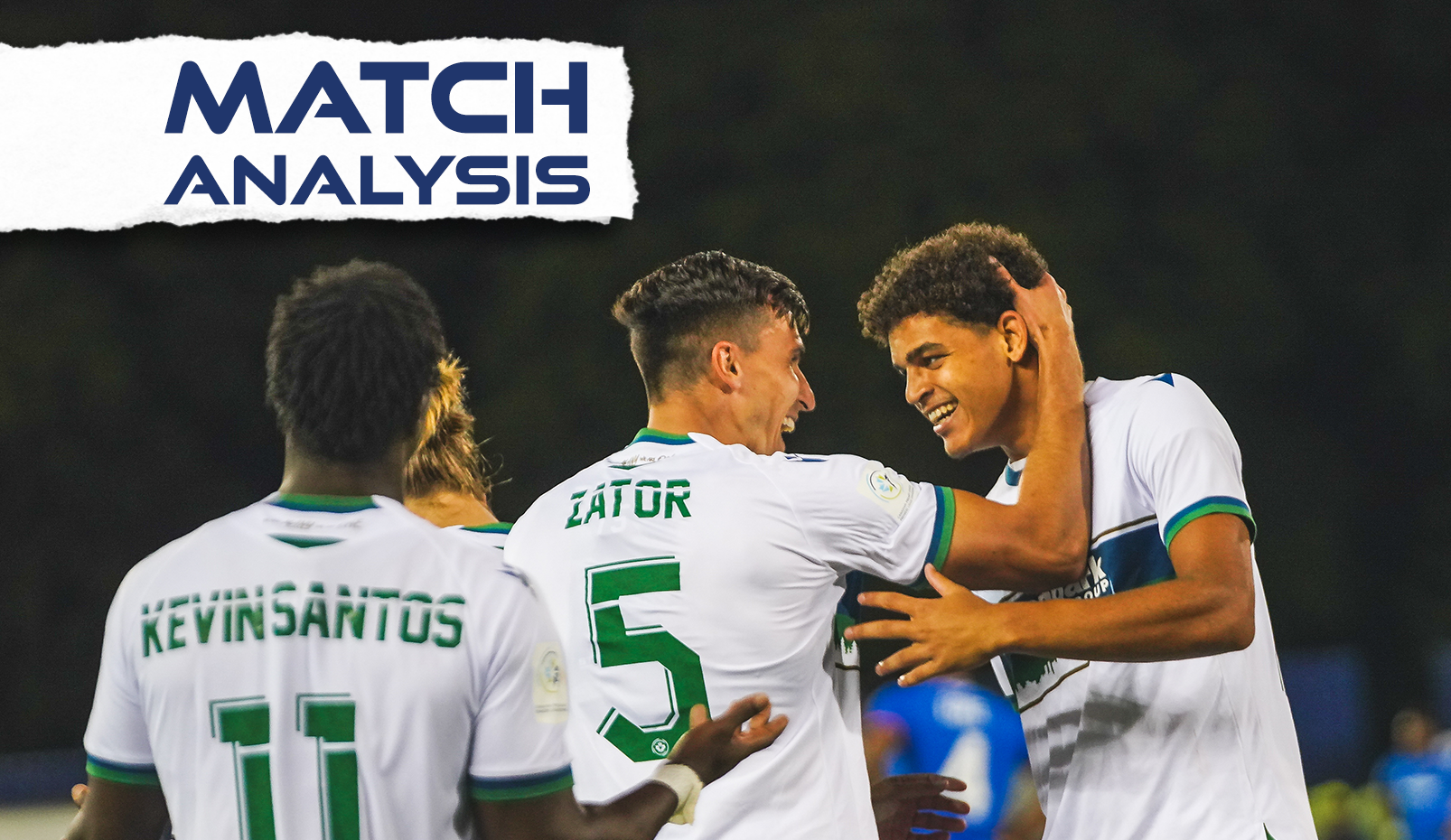 York United picked up their second 3-1 victory in a row on Friday night, beating FC Edmonton at York Lions Stadium.

Mo Babouli continued his strong form since returning to the CPL, scoring a brace — the first and third goals for York United. The first was a header from a Chrisnovic N’sa cross into the box, and the second a converted penalty past Darlington Murasiranwa after winning it himself. Osaze De Rosario scored York’s second goal, his 12th for The Nine Stripes — making him their all-time record goalscorer — but CJ Smith would score his first of the year for FC Edmonton a few minutes later to make it 2-1 before Babouli’s second of the match.

While an extremely difficult task after their poor form earlier in the season, the win does keep York United in playoff contention to some extent. With four wins in their last five matches, they are now just six points back of fifth-placed Pacific FC, and seven back of fourth-placed Valour FC for a spot in the postseason.

Eleven of his twelve goals in 2022 have come in league play, the other was in the Canadian Championship, and with Friday’s tally he moves into sole possession of second place in the race for the golden boot — just two goals back of former Pacific FC striker Alejandro Diaz for the league lead.

At one point he had scored half of York’s goals on the season, but with the team finding good form in recent weeks, that percentage has dropped a little bit — he’s now scored eleven of York’s 26 CPL goals, and assisted two others.

De Rosario has shown time and time again that he very well might be the most complete young player in the Canadian Premier League. He has all the qualities an effective striker needs — he’s quick, a lethal finisher, good with the ball at his feet, and a big, strong physical presence that’s hard to knock off the ball.

He can go very far in this sport if he can stay consistent, and will surely be on many clubs’ radars, as well as in the conversation for some awards at the end of the 2022 CPL season.

“I think he has a great mentality,” said York head coach Martin Nash. “He’s open to instruction, he works hard. He still has some things to improve in his game, but he’s a great finisher, he gets in great areas. He’s one of those finishers that don’t need a big backlift, they’ve got power in just a side foot stroke, or if he needs to smash it he can.

“He’s got all the tools to be a top striker in my opinion. He still has some things in the run of play to get better at, but he’s been really good all season, he’s worked really hard for us, and got another goal today so hopefully that can keep going.”

No longer just Dwayne’s son, although the older De Rosario was once again in attendance at York Lions Stadium for this match, Osaze seems to be in the early stages of creating his own legacy in the beautiful game.

The De Rosario family is special and Osaze De Rosario is currently writing his own story!

Watch him tonight as he targets the #CanPL Golden Boot!💪

He won’t be able to add to his tally next week against HFX Wanderers, however, as his yellow card was his fourth of the year, which comes with a one match suspension.

As the FC Edmonton forward admitted himself after the match, scoring goals hasn’t come easy for CPL rookie CJ Smith this season. The opportunities have been there at times this season, with the 24-year-old making 18 appearances in all competitions in 2022 before Friday’s match, but remaining goalless.

Smith, on loan from HFX Wanderers, finally got that first tally in appearance number 19 on Friday night. FC Edmonton head coach Alan Koch brough Smith off the bench at halftime for Simon Triantafillou, and six minutes later he found the back of the net. Unfortunately for The Eddies, Osaze De Rosario also scored in those few minutes, momentarily doubling York’s lead in the 48th minute, but Smith’s strike three minutes later cut the lead in half and gave the Eddies some hope.

He ran onto a pass through the York backline from Nyal Higgins, before squeezing it past the approaching Eleias Himaras to make it 2-1.

CJ Smith gets one back for The Eddies! @FCEdmontonNow cut the lead in half and are now only down 2-1 against @YorkUtdFC #CanPL | 🔴 https://t.co/7JFAUhgjL6 pic.twitter.com/8uwtbvgUjS

“I put a lot of pressure on myself considering I’m an attacking player,” said Smith after the match. “I’ve kept count of how many big chances I’ve missed this season, and I’m not going to say the number, but to finally be rewarded for working and going hard every training session, it feels good. It would have been nice to come back and win, but it’s one for the books and hopefully many more.”

The goal was also special for him, as the Brampton, Ontario native scored his first CPL goal close to home.

“I’m very happy for CJ,” said Koch after the match. “He’s from this area so for him to come back and score makes it very, very special for him and his family. He’s been patient, he’s worked hard.

“I think you saw all of the positives for CJ tonight — his ability to run in behind, his ability to take people on. I’m his coach so I’m always going to be critical, there’s moments that he needs to learn from, and some of those moments were evident in the game today. Just making decisions in certain moments.

“Hopefully he’ll continue to grow, because I feel like he’s one of the players that’s come probably the furthest from our group in terms of where he started at the beginning of the year and where he is now. He’s made significant progression, so we’re going to continue to push him until the end and hopefully this will give him a little bit more confidence.”

Mo Babouli continues great Nine Stripes form, and is a leader on and off the pitch

The decision from York United to bring attacker Mo Babouli back to the Canadian Premier League has proven thus far to be a great bit of business. Babouli has played five times now for York including Friday night, and York has been on an upwards trajectory since.

He’s scored four goals already in that span — twice on Friday night, once against Pacific FC last week, and once against Forge FC two weeks before that. They aren’t just tap ins either, he’s getting himself into great positions and his teammates are getting him the ball — as demonstrated on his header to open the scoring against Edmonton.

In his five matches, York’s form looks like this: win, win, loss, win, win. For a team that only had four wins in the nineteen matches before that, it’s been a remarkable run. Of course Babouli isn’t the sole reason for the team’s turnaround — additions like Tass Mourdoukoutas
and Ronan Kratt, among others have also kicked it up a notch in recent weeks — but Babouli seems to be the missing piece that ties it all together.

He’s a ruthless finisher, strong on the ball, and has been given a lot of freedom by head coach Martin Nash to drift in and out of different spaces on the pitch to get on the ball and make things happen. Nash said after Friday’s match that they “went hard after” Babouli, and that he’s been a great addition to the squad.

“You can see his quality here tonight, and he maybe was unlucky not to have a few more assists. He’s gelling well with the team, the guys are working hard around him and finding him when they need to, and he creates a good partnership with our front three.”

As Nash alluded to, Babouli’s quality isn’t limited to the field of play either. People have raved about his off-field contributions since he first joined Forge FC in 2020, and is already becoming a leader in the York dressing room.

“This is a player with experience, he’s been in a lot of dressing rooms, with teams that have won things,” listed the York defender Mourdoukoutas. “He knows how to conduct himself, he’s a true professional.

“I can’t speak more highly of Mo as an individual, a real humble guy off the field, and on the field it shows the effort he puts in. He’s been a great addition.”

The York United attacker scored a brace in this match, for his third and fourth York United goals in just his fifth appearance for the club.