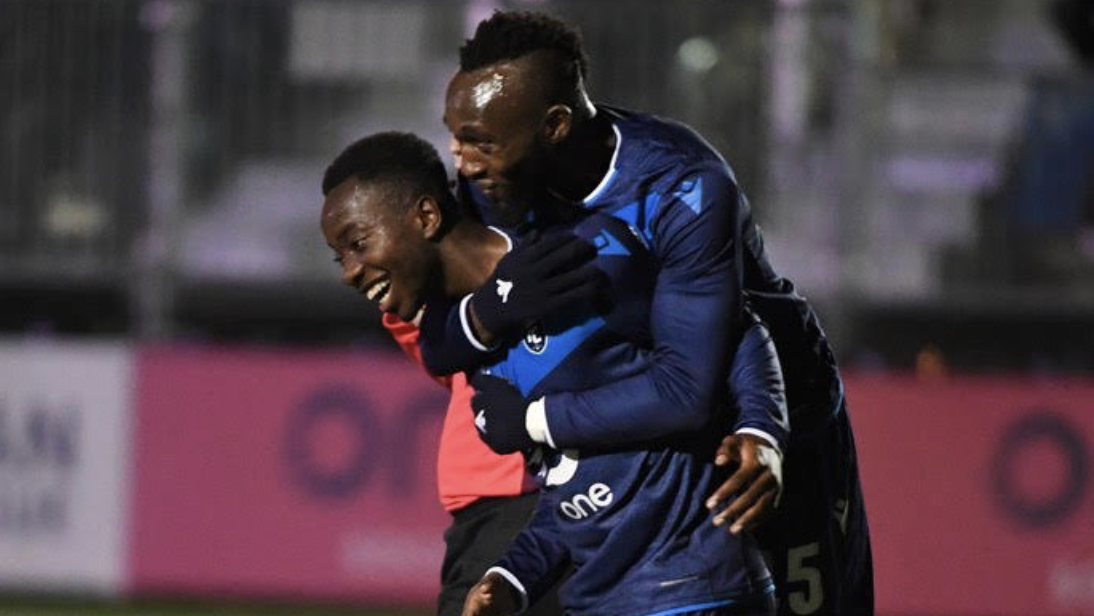 EDMONTON – He may be a Prince, but in his first Canadian Premier League start, he was a king.

As FC Edmonton played its final home game of the inaugural CPL campaign, 18-year-old Prince Amanda stole the show. Starting the game on the right wing, he scored arguably the most highlight-reel worthy goal an Eddie has scored this season, then set up Easton Ongaro’s marker. A goal and an assist. Before halftime.

And he was just a foot or so away from getting his second goal of the game in the 37th minute, as he fizzed a shot just wide.

The Eddies went on to win by a 3-1 count. But make no mistake, this was Amanda’s night.

His goal saw him dash off the right wing, dart past Pacific defender Blake Smith and unleash a left-footed drive just inside the near post.

“I just did what (coach Jeff Paulus) taught me,” Amanda said. “Every day he tells me to get the ball from wide, one-on-one with the defender, then either cross or have a shot.”

And, when he saw the ball go in?

“To be honest, I didn’t know what I was really doing. It was a surreal feeling. I just wanted to run with my teammates and celebrate as a family.”

And, his play-by-play of his assist on Ongaro’s goal: “Easton’s a great player, that was a great movement from him. He’s a goal-scoring machine. I’m just happy I was able to find him and add on to his goal-scoring streak.”

“I’m one of the fortunate ones who got to see Prince develop in our academy for many years,” said Paulus. “And this is what Prince does. But what you don’t see from Prince, what no one sees from Prince … The attitude, for an 18-year-old, 17 when he started, to have the confidence, the discipline and the attitude to stay positive and wait for his moment is just incredible.”

Paulus said that, at the start of the season, Amanda would often defer and pass the ball to senior players rather than try to take over the play. But he’s seen the young player come out of his shell.

“He’s worked his way through, he’s found his confidence and he’s been lighting it up in training.”

Last year, Amanda opened eyes on the other side of the Atlantic when he scored three times for FCE’s U-17 side at the SupercupNI, an elite tournament featuring some of the world’s best teens. He was key in helping the Baby Eddies beat an elite American side in Northern Ireland.

“What I’ve always loved about Prince is his ability to go 1-v-1,” said Paulus. “He’s a brave player… In this last little bit of training, Prince is like, ‘Nah, I’m the guy. I’m going to be brave. I’m going to go 1-v-1. So, for him to come out and do this, this is what I get to witness a lot of. This is what I want from Prince. He can be that dangerous, lightning 1-v-1 player out wide.”

Pacific clawed one back right before the one hour mark. Kadin Chung played a ball to Ben Fisk in the Eddies’ penalty area, and the former FCE player poked the ball with his left foot past defender Mele Temguia, then smashed a shot past keeper Dylon Powley.

The Eddies had a golden chance to restore their two-goal advantage in the 73rd. Pacific keeper Mark Village misplayed the ball, leaving it for FCE’s Tomi Ameobi, who played it over to Tony Tchani. The former Toronto FC and Vancouver Whitecap man had a clear view at goal, but Pacific defender Lukas MacNaughton scrambled back just in time to clear the shot off the line.

But the Eddies did get that insurance goal with 11 minutes to go. In the second phase of play after a set piece, Temguia was in the right place at the right time to finish off a chance from close range.

With 15 minutes to go, Paulus brought Amanda off, and he got a hearty round of cheers from the Eddies’ faithful. In a season that hasn’t really gone the way that the Eddies would have wanted, this big performance from a local kid was a heck of a way to put a cherry on top of the final home game of the campaign.

“It’s great, because that’s what this league is about; it’s about giving these young kids an opportunity,” Paulus told OneSoccer before the post-game interview session.

“You can’t spoil them, you can’t just give it to them if they haven’t earned it, and he’s earned it through training and he’s come out today and introduced himself to Canada. I can’t wait to see what he does going into next year.”