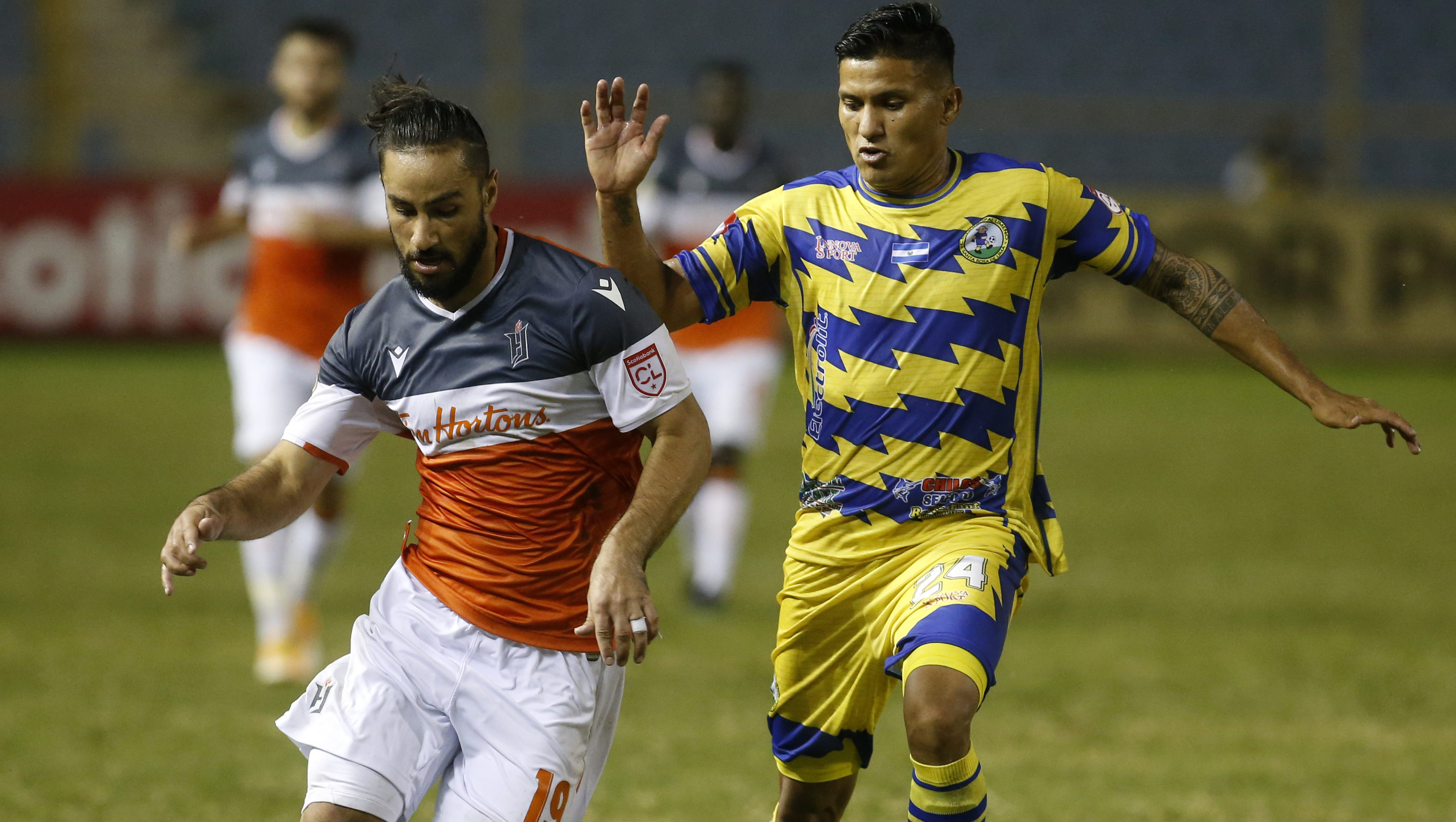 Luis Mendez of Municipal Limeño and Mol Babouli of Forge FC during the match of the preliminary round of the Concacaf League tournament held at the Cuscatlan Stadium in San Salvador. (Photo by Carlos Cardenas)
New Canada Soccer president: What Forge is doing in Concacaf League is amazing
2020-11-25
by
John Molinaro, Director of Content (@JohnMolinaro)
News

Forge FC didn’t have time to rest on its laurels after winning a second consecutive CPL Championship this summer at The Island Games.

Shortly after hoisting the North Star Shield, Forge had to return home and hit the training pitch again in preparation for the 2020 Concacaf League campaign, which kicked off in October.

Thus far, the CPL champs’ continental travels have taken them to El Salvador and Panama, where they earned historic wins over Club Deportivo Municipal Limeño and Tauro FC to advance to the quarter-finals.

Now, Forge is poised to make history for a third time, as a win against Haiti’s Arcahaie FC next week would not only see the Hamilton-based club move on to the semifinals, but they’d also clinch a berth in next year’s Concacaf Champions League. In doing so, Forge would become the first CPL team to qualify for the most prestigious club competition in the Concacaf region.

All of this has not escaped the attention of Nick Bontis, the newly-elected president of Canada Soccer. A tenured professor at Hamilton’s McMaster University, Bontis served as Canada Soccer vice president for the last three years, and he has been a director since 2012. He has also led Canada Soccer’s strategic planning process for the past eight years, and played a role in the launch of the Canadian Premier League.

Bontis, 51, beamed with pride when talking to reporters this week about his hometown Forge FC and the success they’ve enjoyed in the CPL and Concacaf League.

“I, along with many others here at Canada Soccer — we were the original architects of the CPL, so to see it come to fruition in my hometown is a fantastic sight. Kudos and props go out to Bobby (Smyrniotis) because what he’s doing with Forge is amazing,” Bontis said.

“(The CPL) is a two-year-old organization — this league is a baby in the grand scheme of football — and to have a baby grow up quickly, achieve what it has and to now potentially (secure a Champions League berth) is unheard of.”

He later added: “The CPL was an important, strategic objective of mine, personally… To actually see it come through its embryonic stage and fruition to launch, it’s very gratifying.”

Forge’s impressive run has major implications off the pitch, according to Bontis. Concacaf League success draws international attention to the CPL and sport in Canada, and that could lead to investments similar to the one made by Spanish powerhouse Club Atlético de Madrid when they launched an expansion franchise is the nation’s capital this year.

“The last thing I did as vice president just before the lockdown in March was go to Ottawa and welcome Atlético Madrid’s investment in soccer in our country,” Bontis recalled.

“What an amazing thing that is, to have one of the premier clubs of the world come to Canada and say, ‘This is where we want to invest.’ I want to make sure that if Atletico is satisfied with their investment that we can then find investments from other international clubs, whether it be from England, or Scotland, or Italy or Germany. Anything we can do to raise the profile of our domestic league will attract international investors which will allow the league to grow.”

Bontis didn’t get a chance to travel to PEI to take in The Island Games. Like most fans, he had to watch the action on TV. Still, he was impressed by the standard of play on offer. What impressed him even more was how the CPL was able to pull off such a successful competition in the middle of a COVID-19 pandemic that has caused so many problems for sports leagues and organizations around the world.

“I think (The Island Games were) very important because it shows that the CPL can execute a competitive product in a pandemic environment. A lot of organizations, whether it’s the NHL, NBA, they struggled. They’ve had to strategically pivot, and the CPL had to, as well. The difference is the CPL is two years old, and doesn’t necessarily have that expertise; yet we executed and we showed that we can do it,” Bontis stated.

Canada Soccer’s new head honcho was also impressed by how many youngsters made their mark during the shortened 2020 CPL season.

Notably, Pacific FC’s Marco Bustos (23) and HFX Wanderers Akeem Garcia (24) have been nominated for the league’s MVP award. Valour FC defender Julian Dunn (who was on loan from Toronto FC) has been nominated for the Best Canadian Under-21 player, alongside Cavalry FC newcomer Mo Farsi and ex-HFX defender Chrisnovic N’sa (now with York9 FC). Goalkeeper of the year candidate Christian Oxner of HFX is 24.

The league’s exciting crop of youngsters is something that is firmly on the radar of Canadian national team coach John Herdman.

“In terms of player development, it was a very interesting exercise at The Island Games. When you saw, for example, young players — many of them from MLS academies — graduate for playing time into CPL franchises. Many of those players had very good performances for those teams. I see that as a very important relationship between the MLS and the CPL for a development pathway moving forward. Obviously, John does as well, in terms of where he is seeing where that next generation of our national team players is coming from,” Bontis offered.

As far as the 2020 Canadian Championship final between Forge FC and Toronto FC, it has been in a holding pattern for several months due to health and safety concerns stemming from the pandemic. Bontis didn’t offer any kind of timeline as to when it might be played, and hinted that it might even be pushed back into the early part of next year.

“We can be patient in terms of when we’re going to host the games between those two clubs. If it moves into early 2021, we’re fine with that,” Bontis said.

“The health authorities are the ones that determine the rules around how we’re going to play that match, whether there’s even going to be fans in the stands.”