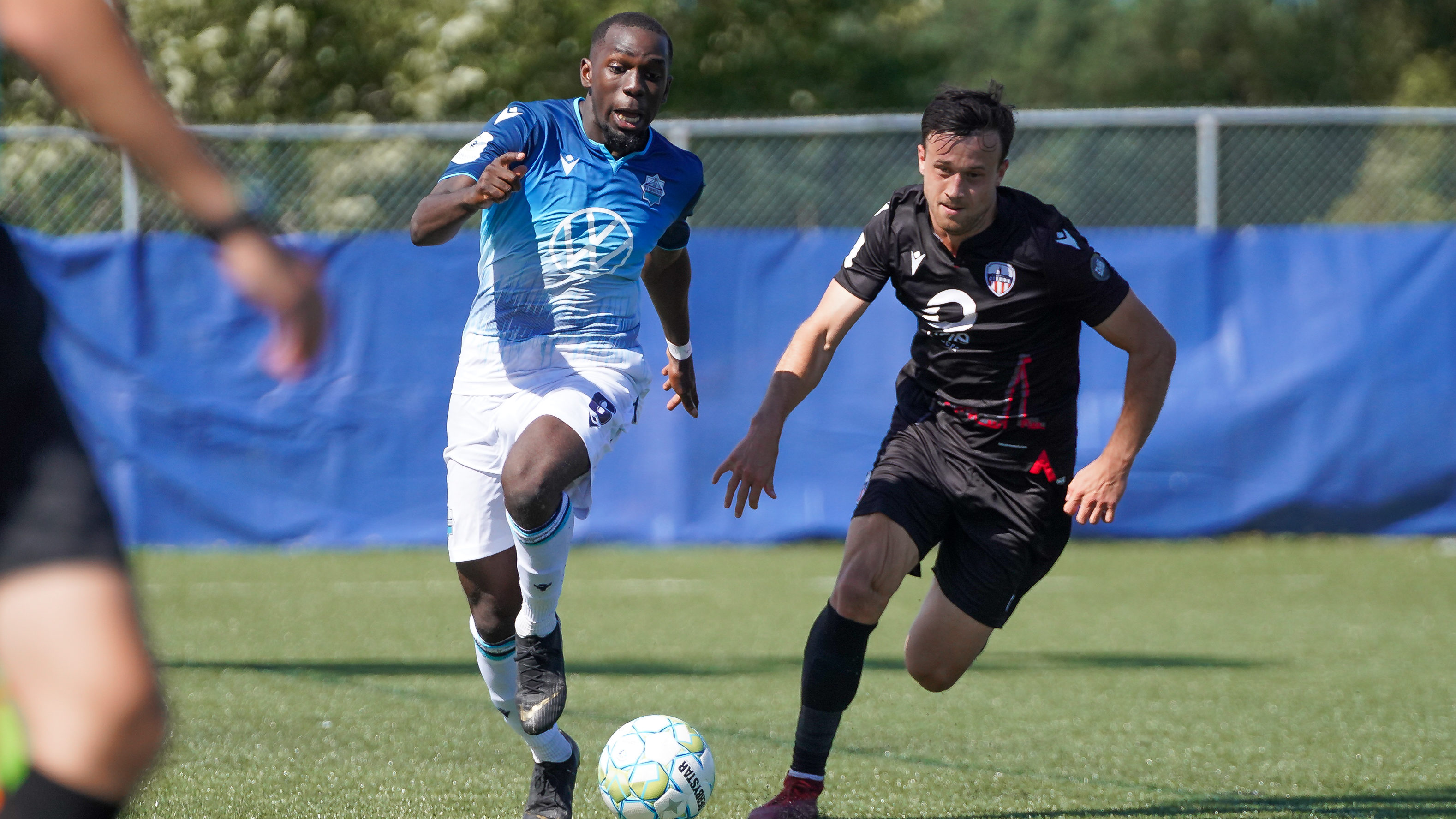 Don’t get confused: The N’Sa brothers are not a package deal.

Announced one day apart as York9 FC’s latest off-season signings, Felix and Chrisnovic N’Sa came to Southern Ontario separately, though family played a major role in the Y9’s recruitment of the siblings.

Chrisnovic, 21, followed his younger brother to York9 in arguably the biggest off-season move in the Canadian Premier League, swapping HFX Wanderers FC for Y9 after an impressive campaign that earned him an Under-21 Player of the Year nomination.

“I thought a lot about making this decision,” Chrisnovic said just days after the Wanderers revealed he’d declined their latest contract offer.

“Getting a chance to speak with the coaches and the mentality they have intended for me and everything they said – I like the approach, and my brother was involved and we’re really close. Our family was so eager.”

Chrisnovic played in nine of HFX’s 11 matches in PEI at The Island Games, impressing as an explosive right fullback. Aggressive on the overlap and in the press, he thrived in the Wanderers system, with 59 duels won and 16 tackles (both third-best in the CPL). N’Sa played 21 times in the Wanderers’ 2019 season and distinguished himself by playing across all positions in defence, as well as central midfield.

Felix, meanwhile, arrived in York Region on his first professional contract, with a recent trial at Pacific FC his first taste of a pro-environment after playing in a Quebec youth league.

“I have a mentor with me, and you’re going to help me and push me,” Felix said. “That will help me, no doubt.”

Competitiveness, something shared between both siblings, was a focus for York9’s managing consultant Angus McNab in adding Chrisnovic to his team’s roster.

“We believe in them both as players – they’re not a package deal,” McNab said.

“We began to speak about competition and having siblings together in the squad and how they can thrive in a competitive environment for us. I think that ticked more boxes for Chris.”

McNab pointed out Chrisnovic’s performance in HFX’s match against York9 at The Island Games as an example of his ability, specifically how he drew the free kick that led to the winning goal.

“Chris shut us down, from minute one to minute 90,” McNab said. “When it comes to dropped points… how he drew that free kick probably prevented us from advancing. That explosion, that sort of athleticism from the guys. That’s what drives their versatility and that’s what’s important to us.”

Chrisnovic was one of a handful of Quebec-produced players in the CPL in 2019. Since then, teams have turned their focus towards the province as players such as N’Sa, York9’s Diyaeddine Abzi, and Cavalry FC’s Mo Farsi have excelled in the CPL. Now, Chrisnovic is welcoming his Montreal-born brother to the professional game.

“My mom is very happy,” Felix said. “She kept saying ‘they need to sign the two, the two of you’. My brother wasn’t sure but the family made it seem like there was no choice.”

Chrisnovic admitted family played a part in him signing with York9, but also said swapping Halifax for the big, bright lights of Toronto was also a factor in his decision.

“Halifax was great but Toronto is Toronto,” Chrisnovic said. “I’m a city guy and to get to play in a big city like this, closer to my family and friends I know in Toronto… that was something that was turning me there. Our sister is excited to come visit Toronto too.”