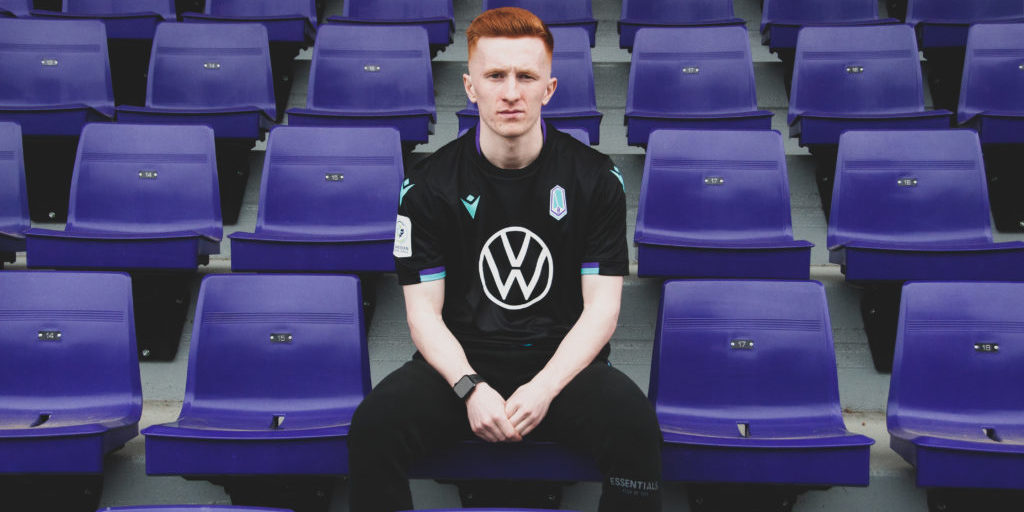 Ollie Bassett. (Photo: Pacific FC)
One international from each CPL club to watch for in 2021
2021-06-18
by
Brady Reid, CanPL.ca Contributor
News

An extended CPL offseason has given its eight clubs plenty of time to look abroad for additions ahead of the 2021 season.

Forge FC will roll out a very similar roster this year to the one that captured Island Games supremacy in 2020 — along with a couple of exciting newcomers.

Meanwhile, Valour and Atletico Ottawa in particular have undergone plenty of personnel change and will look like two very different sides when things get underway in Winnipeg on June 26.

Across the league from Halifax to Victoria, here is one international signing on each squad to keep an eye on ahead of the 2021 campaign.

Santos initially signed with the Wanderers in February of 2020 but was unable to join the side in PEI due to COVID-related travel restrictions. Finally with the club and in training, the Brazilian defender brings an interesting dynamic to the Halifax backline thanks to his versatility — able to play both centre back and left fullback thanks to his strong left foot and passing range.

Add in the potential for Jems Geffrard to be in and out of the team when on international duty with Haiti, and the 25-year-old Santos could feature quite prominently in the heart of HFX’s defence alongside Peter Schaale.

Núñez arrives in the capital city on loan from parent club Atlético Madrid, the first such instance since Ottawa formed a partnership with the La Liga outfit. The Spanish-Dominican winger is known for his pace in wide areas while most recently suiting up for the Atlético de Madrid U-19 side.

Although largely unproven at this stage of his career, the 19-year-old has plenty of potential for an Ottleti attack that scored just seven times at the Island Games last season.

Browne is no stranger to loan spells here in Canada having spent parts of the 2019 season in MLS with Montreal Impact (now CF Montreal.) Forge has managed to bring the Panama international back up north for the duration of the 2021 season.

Adding the 27-year-old to an already potent attacking group, Bobby Smyrniotis will hope for impact not only in CPL action but in Concacaf play where Browne has shown his quality in the recent past for Independiente — scoring twice in a two-legged quarterfinal tie against Toronto FC in the 2019 Concacaf Champions League.

Signed on a permanent deal through 2022, Ulbricht comes to York from Hamburg’s second team in the Regionalliga Nord, the fourth tier of German football. Known for his poacher’s mentality, the 21-year-old could be leaned on heavily by Jimmy Brennan as the Nine Stripes managed just two goals from open play at the Island Games.

His versatility gives him the potential to play any position across the front three which should see the German striker feature prominently in 2021.

Reyes joins the Winnipeg based club on loan from Liga MX side C.D. Guadalajara, spending the first half of 2021 captaining their under-20 side. Rob Gale leaned hard on TFC loanee Julian Dunn at the Island Games and with Dunn not returning the short-term move for Reyes could fill Valour’s need for a youthful but sturdy defender once again this season.

The 20-year-old Mexican will reportedly be the first of many future transfers between the two clubs so his performance for Gale’s group could have large implications for this partnership moving forward.

Another loanee for the 2021 season, Avila heads to the Eddies from USL Championship outfit Austin Bold FC. Thanks to his ‘excellent work rate and technical proficiency’, Alan Koch expects ‘Beto’ to compete immediately for a starting spot in the Edmonton attack.

The loan from Austin came on the assumption that the American-Mexican forward will get meaningful minutes under Koch during his time in the CPL, so it’s a safe bet that the 20-year-old will get a fair opportunity to shine this season.

Mason has as decorated a CV as any Canadian Premier League player past or present, most recently playing for MK Dons. The 30-year-old Englishman has spent much of his career playing across the Championship — England’s second-tier — but did enjoy a short stint in MLS with Colorado Rapids back in 2018.

Signed on to a multi-year deal with Cavalry, Mason’s transfer has created plenty of buzz throughout the offseason. Supporters will finally get to see what the talisman can do for the Cavs when the season kicks off next weekend.

Another UK native, Bassett lands on the West Coast from the lower leagues of England. Pacific FC play an exciting brand under Pa-Modou Kah, exactly the sort of environment where a 23-year-old attacking midfielder might rejuvenate his playing career.

Suiting up for Northern Ireland in the 2017 UEFA Under-19 European Championship qualifiers, there’s plenty of potential in Bassett. A change of scenery and the right system just might be the right move to find that next level.